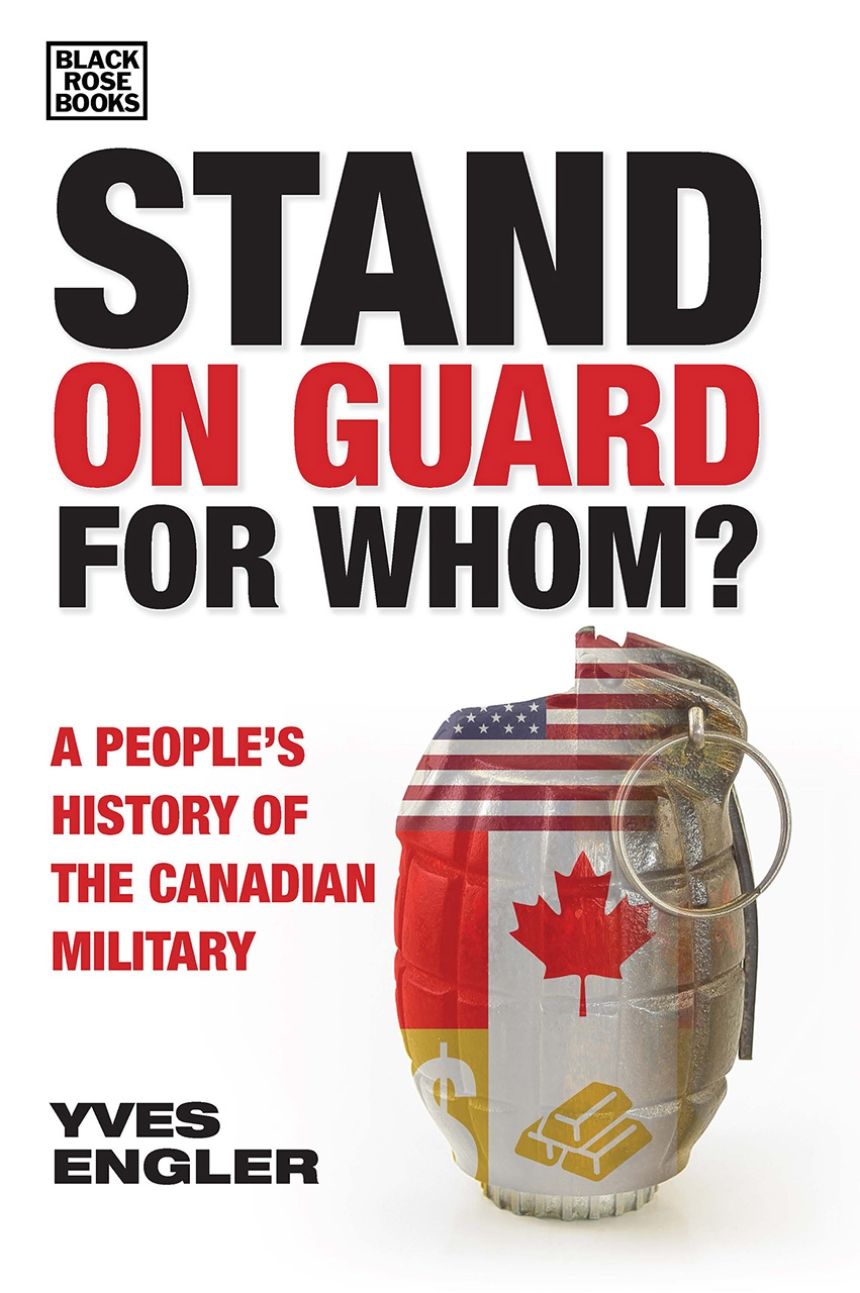 Many informed Canadians remain surprisingly unenlightened about the country’s military history. Canada’s military is widely viewed as either nonexistent, irrelevant, or a force for good. The Canadian Forces’ (CF) public relations department has been very effective in crafting a positive image for the country’s military. In addition, constant comparisons to the US’s rampant militarism benefits Canada’s image.

With the new book Stand on Guard for Whom: A People’s History of the Canadian Military, Canadian foreign policy expert Yves Engler produces a rigorously researched document that exposes Canada’s role as the handmaiden of imperialism—first of the British then of the US—and reveals countless details that qualify the Canadian military as an international actor in its own right.

Like its militaristic neighbor to the south, Canada’s weapons industry is an international juggernaut with links to big business and the highest government posts. The country’s largest military firm is Montreal-based CAE, which trains thousands of Canadian, US, and British fighter pilots. In addition, CAE trained military personnel of apartheid Israel, and trained Saudi and Emirati pilots that bombed Yemen beginning in 2015. Over 100 Canadian weapons firms exported products to Israel, according to a 2009 report. Wherever atrocities are committed, Canadian arms manufacturers seem to be found. During the Indonesian genocide of East Timor, Canada “pumped more than a third of a billion dollars in military exports into Indonesia, an outlaw state repeatedly condemned by the United Nations,” for example.

Montreal-based construction and engineering firm SNC Lavalin, infamous for a sordid legacy of corruption that has involved Prime Minister Trudeau, oversaw the building and management of CF bases in Kandahar, Bosnia, and Kabul “worth hundreds of millions of dollars” in a partnership with the US, and received hundreds of millions more to help service warships. The equally infamous Blackwater private security company, now rebranded as Academi, “was paid over $10 million to train JTF2 [elite special forces] personnel and CF police” and employed former CF special forces members. Many of these private security companies are run by former high-ranking officials who shuttle back and forth between private and government positions, often approving funding and contracts to companies that they work for.

Similar to Blackwater, Montreal-based GardaWorld is the world’s largest privately held security company, with over 90,000 employees. Engler reveals that GardaWorld netted hundreds of millions of dollars from the US-led invasion of Iraq, for instance, even though Canada did not nominally declare war on Iraq. Former CF Lieutenant-Colonel Andrew Zdunich was the head of GardaWorld’s Libya operations, and former CF Commander Daniel Menard was the head of GardaWorld’s Afghanistan operations. “Garda’s board of directors also included “prominent former US and British military and security officials.”

Other chapters detail the use of the CF to clear Indigenous land for colonization, often building military bases on seized Indigenous territory. As Engler reveals, this process is not ancient history, but continued unabated from the earliest colonial incursions of the British Empire, through the 20th century, and into today. “The naval base in Esquimalt was built on land taken from the Songhees… CFB [Canadian Forces Base] Chilliwack was built on land taken from the Three Sto:lo; CFB Petawawa was land from the Algonquins of Holden Lake; CFB Gagetown on Oromocto territory,” Engler writes.

Other chapters detail the Canadian military’s obscene destruction of the environment, its legacy of sexism and racism, its malignant capacity in NATO and NORAD, its economic tentacles that reach into all aspects of Canadian life, and its significant role in overthrowing liberation leaders including Kwame Nkrumah, Patrice Lumumba and, more recently, Jean-Bertrand Aristide and Muammar Gadaffi. Canada’s involvement in the Boer war, the two world wars, Korea, Iraq, Afghanistan, in addition to its leadership position in the destruction of Yugoslavia, Libya, and Haiti, are all examined in depth.

A map of current and potential Canadian military bases. Illustration: The Breach

Many Canadians continue to believe that their military is a force for peace, even after Chief of Defence Rick Hillier clearly asserted “our job is to be able to kill people.” Engler does not ignore this aspect of the Canadian Forces, but investigates how the army’s public relations department maintains such a high degree of effectiveness—an aspect of military operations generally ignored by military analysts or historians.

“The CF operates the largest PR machine in the country,” Engler writes. “To protect its image and promote its worldview the CF spends hundreds of millions of dollars annually on public relations and related military commemorations.” Over 600 staff members are devoted to public relations operations. Meanwhile the activists and anti-war groups that combat the pernicious influence of CF propaganda campaigns usually work as volunteers, in their spare time, and make extraordinary sacrifices to procure funds for the most basic expenses. In response to any criticism of Canada’s armed forces, its public affairs employees engage in flack campaigns, attacking journalists who composed unflattering articles about the CF, intimidating those who spoke up, investigating journalists’ sources, and writing to their bosses and editors to threaten their livelihoods. At times the CF disseminated outright lies to the media and academics.

Engler’s writing is not imbued with ideology, nor is it speculative, or creative. His great strength is meticulous research, and as a result this book will appeal most to those seeking authoritative evidence. While this may detract from any page-turning appeal that this subject could possess, the book more than compensates with its sheer density of information. At times, each sentence is followed by a reference—by my calculations the book contains over 2,000 footnotes—and Engler lists about 200 books in the bibliography.

The first edition, published by Black Rose Books, is left wanting in one regard, which could be rectified in future printings: the lack of a comprehensive index. The print version of this book could be an even more effective tool for researchers with this addition.

Following Engler’s books that have focused on the foreign policy of the Trudeau and Harper administrations, Canada’s historic foreign policy, Lester Pearson, and Canada’s role in Haiti, Africa, and Israel, respectively, Engler set out to write the first general overview of the Canadian military that approached the topic “from the perspective of those harmed or disenfranchised in Canadian wars, repression, and military culture.” The result is an indispensable publication for researchers, writers, journalists, activists, pundits, and those readers seeking a greater awareness of Canada’s place in today’s geopolitical landscape and that of the past 200 years. “There was never a clear break with the colonial mindset of enforcing imperial rule,” concludes Engler.