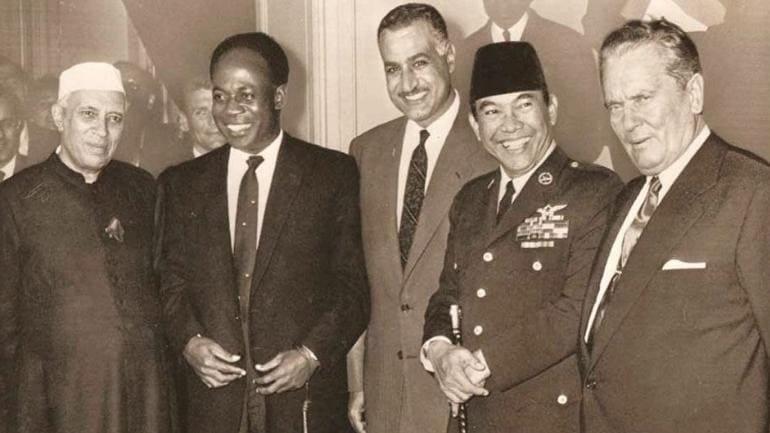 After the ceasefire agreement came into force in Korea on 27 July 1953, the United States shifted its attention to Indo-China to prevent the defeat of France in its colonial war of over seven years. On 18 May 1953, United States Secretary of State John Dulles had already expressed alarm. He said, “…all of Southeast Asia is today in great peril, and if Indo-China is lost, there would be a chain reaction throughout the Far East [and South Asia].”

While the United States was doing everything to prop up France by meeting reportedly over 76% of the expenses incurred by France to wage the Indo-China War, during a debate in Parliament on 22 February 1954, Nehru appealed for an immediate ceasefire. On 24 April 1954, just two days before the Geneva Conference opened for all interested parties to discuss peaceful settlement of the Korean and Indo-China issues, Nehru proposed a six-point programme in Parliament to establish peace in Indo-China.

Apart from seeking an immediate ceasefire, it urged France to grant the countries of Indo-China independence and an undertaking from the great powers not to interfere in their affairs. His proposals formed the basis of the communiqué of the Conference of Prime Ministers of five countries—Burma [now Myanmar], Ceylon [now Sri Lanka], India, Indonesia and Pakistan—which convened on 29 April-2 May 1954 in Colombo. The communiqué came to the notice of the members of the Geneva Conference. [At the Colombo Conference, Indonesia proposed an Afro-Asian Conference in 1955; Yuri Nasenko (1977), p.174.]

India was not an official participant at the Geneva Conference, but VK Krishna Menon was sent as an Indian representative. He held unofficial meetings with heads of the official delegations present, which significantly contributed to the success of the talks. Moreover, the humiliating defeat of the French forces at the hands of the Viet Minh forces in the battle of Dien Bien Phu on 7 May 1954 ensured the Geneva Accords on Indo-China were speedily signed on 21 July 1954. To supervise the fulfilment of the terms of the Accords, an International Commission was appointed consisting of Canada, Poland and India with India as chair, which again was a sign of international recognition of India’s stature as an honest mediator.

Late in June 1954, during a recess in the Geneva Conference, at the initiative of Krishna Menon, Chinese Premier Zhou Enlai was invited to India. The talks between Zhou Enlai and Nehru ended on 28 June 1954 with a joint statement underlining the principles that would define relations between India and China. The Five Principles of Peaceful Co-Existence were first set out in the preamble to the Sino-Indian Treaty on Trade and Communications between the Tibetan areas and India. It was signed on 29 April 1954 at Peking [Beijing] by the Indian Ambassador to China N Raghavan and the Chinese Deputy Foreign Minister Chang Han-fu. Also known as the Panchsheel Principles, they were:

The joint statement signed 28 June 1954 said, “The Prime Ministers reaffirmed these principles and felt that they should be applied in their relations with other countries in Asia as well as in other parts of the world. If these principles are applied not only between various countries but also in international relations generally, they would form a solid foundation for peace and security and the fears and apprehensions that exist today would give place to a feeling of confidence…. With the assurance of territorial integrity and sovereignty of each country and of non-aggression, there would be peaceful coexistence and friendly relations between the countries concerned. This would lessen the tensions that exist in the world today and help in creating a climate of peace.”

The United States administration, of course, had no intention to uphold such principles.

In a desperate attempt to get a foothold in South Asia, the United States tried to bolster its relationship with Pakistan by first granting it military aid. India was informed of the decision on 24 February 1954 through a letter from the United States President Dwight Eisenhower. The letter said that should the Indian government request such military aid; it would receive the “most sympathetic consideration”. Nehru categorically rejected the offer of United States military aid during his address before the Indian Parliament on 1 March 1954. [Yuri Nasenko, p.166]. Unperturbed by Nehru’s adverse reaction, on the very day the Geneva Accords on Indo-China were signed, Eisenhower held a press conference to make the United States’ aggressive intentions clear: “The United States is actively pursuing discussions with other free nations with a view to the rapid organisation of a collective defence in Southeast Asia to prevent further direct or indirect Communist aggression in that general area.”

With this objective, the United States first entered into a mutual defence assistance agreement with Pakistan on 19 May 1954. After that, it attempted to draw the “Colombo Powers” into the proposed Southeast Asian military alliance, which was to be formed following a conference scheduled in the Philippines from 6 September 1954 onwards. Nehru not only rejected the American invitation, he told Parliament the proposed conference was an attempt “to change the whole trend towards peace that the Geneva Conference had created…”.

Burma, Ceylon and Indonesia, too, rejected the invitation. Only three Asian countries, Pakistan, the Philippines and Thailand, joined the USA, United Kingdom, France, Australia and New Zealand to form the South-East Asia Treaty Organization (SEATO), formed in Manila on 8 September 1954. The United States also signed Mutual Defence Treaties with South Korea on 1 October 1953 and with the Chiang Kai-shek government on 2 December 1954.

Yet another military alliance, initially known as the Baghdad Pact and later known as Central Treaty Organization (CENTO), was formed by Iraq and Turkey on 24 February 1955. In the same year, the United Kingdom on 5 April, Pakistan on 23 September, and Iran on 3 November joined the Baghdad Pact.

Concurrently, covert activities went on as usual. While preparations were underway to hold the Bandung Conference, CIA agents allegedly attempted to disrupt it with a plot to assassinate Enlai while he was en route to Indonesia. Air India plane “Kashmir Princess”, which China had hired to transport delegates (reportedly including Enlai) to Bandung, took off from Hong Kong and was blown up mid-air over the sea near Indonesia on 11 April 1955, killing all but three of the 19 passengers and crew.

Enlai miraculously escaped due to routine security precautions by changing, at the last moment, to another flight from Rangoon to Bandung with Nehru and Burmese Premier U Nu. [See Col AK Mitra, “Disaster in the Air: The Crash of the Kashmir Princess, 1955”, 2001.]

The tenets of NAM were first fully enunciated at the Asian-African Conference at Bandung, Indonesia, which was held from 18 to 24 April 1955. Altogether about 340 delegates from 29 countries representing over 1,440 million people, almost two-thirds of the world population, attended. Reportedly, around 655 correspondents from across the globe also landed in Bandung to cover the Conference.

In addition to demands to end apartheid and colonialism, Section G of the Final Communiqué on “Promotion of World Peace and Cooperation” precisely expressed the Bandung Conference’s central aim. It was as follows: “The Conference considered that disarmament and the prohibition of the production, experimentation and use of nuclear and thermonuclear weapons of war imperative to save [hu]mankind and civilisation from the fear and prospect of wholesale destruction. It considered that the nations of Asia and Africa assembled here have a duty towards humanity and civilisation to proclaim their support for disarmament and for the prohibition of these weapons and to appeal to nations principally concerned and to world opinion, to bring about such disarmament and prohibition… The conference declared universal disarmament is an absolute necessity for the preservation of peace and requested the United Nations to continue its efforts and appealed to all concerned speedily to bring about the regulation, limitation, control and reduction of all armed forces and armaments, including the prohibition of the production, experimentation and use of all weapons of mass destruction, and to establish effective international control to this end.”

The Final Communiqué also implored the participating nations to remain free from mistrust and fear, show goodwill, practice tolerance, live together in peace with one another as good neighbours, and develop friendly cooperation based on ten agreed principles.

Enduring unity and cooperation among the Asian and African nations based on the above objects and principles would have harmed the interests of the militarist blocs. Hence, the proponents of military blocs did everything they could to disrupt the possibility of any such unity and cooperation among the Afro-Asian nations. The failure of the Bandung Conference to launch a permanent Asian-African nations’ organisation was a sign that the writ of the pro-militarist lobby within the Asian and African countries had ultimately prevailed.