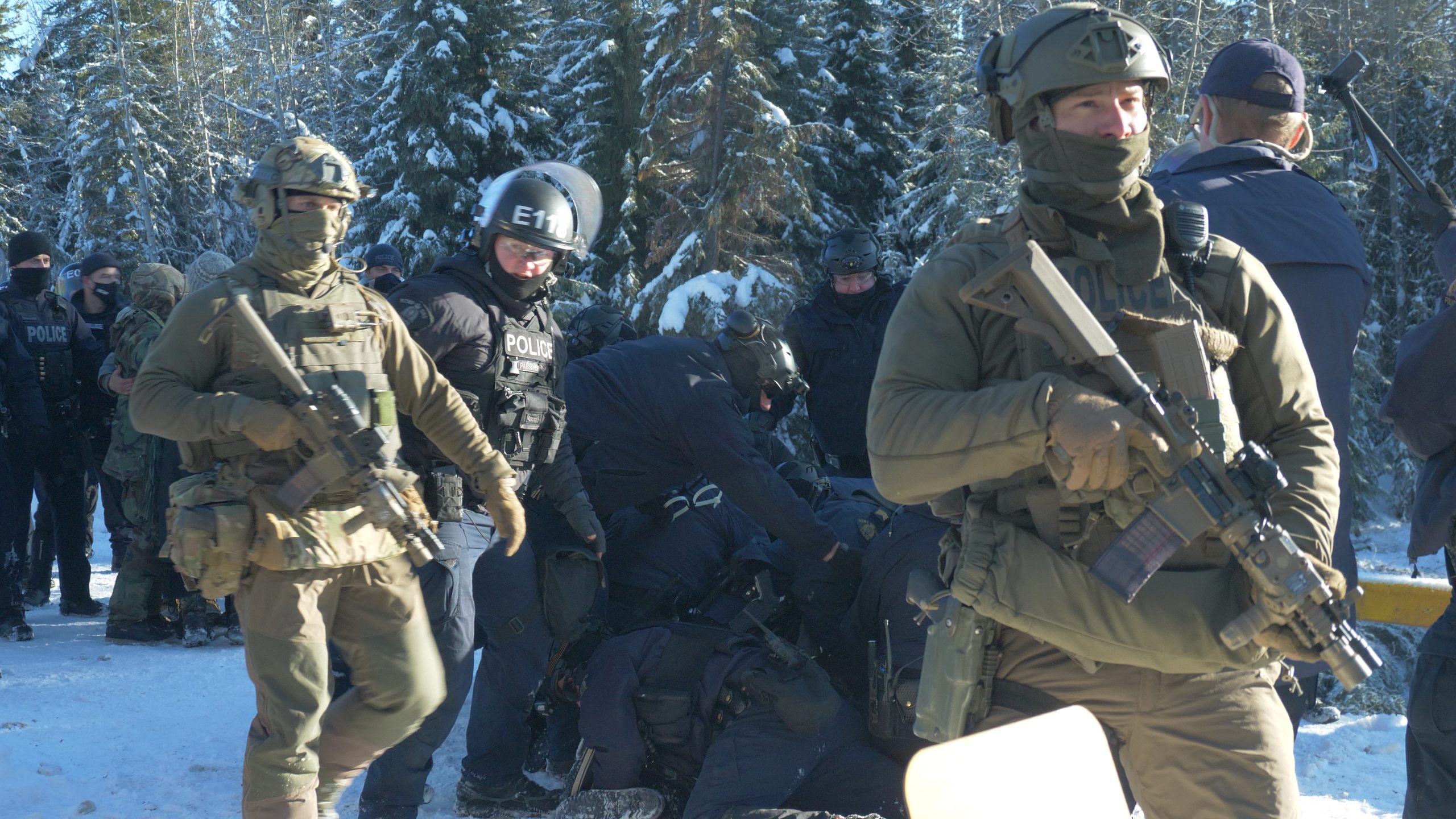 Police cracked down on a blockade by members of the Wet’suwet’en tribe and arrested over a dozen people but failed to end the blockade of the drill site. The tribe has been resisting work on TC Energy’s Coastal GasLink (CGL) pipeline

Indigenous groups in Canada resisting a multi-billion dollar pipeline are yet again facing a crackdown. On Thursday, November 18, the Royal Canadian Mounted Police (RCMP) arrested 15 people and attempted to disrupt an Indigenous-led blockade of a drill site. Among those arrested were two community elders, three legal observers and a journalist.

The latest crackdown comes just days after the Gidimt’en clan members of the Wet’suwet’en tribe sent out a notice to the employees of TC Energy’s Coastal GasLink (CGL) pipeline, on November 14. The stand-off between CGL and Indigenous protesters also led to several workers being stranded at the drill site.

Clan members and elders have for weeks been holding a blockade at the drillsite at Coyote Camp, which falls within the Indigenous Wet’suwet’en lands. After the evacuation notice was handed out, CGL was given eight hours time to vacate Wet’suwet’en land.

But according to Gidimt’en activists, who have been manning the blockade at Coyote Camp, not only did the pipeline company request a two-hour extension as a stalling tactic, they also did not inform their employees of the situation, leaving them stranded. The RCMP was also kept in the loop about the evacuation and also the two-hour extension that was granted to CGL for a peaceful exit.

“If TC Energy thinks that raiding Wet’suwet’en territory will stop the resistance against this project, they’re dead wrong,” said Sleydo,’ one of the chiefs supporting the movement and part of the Coyote Camp protest site, in a statement released by Wet’suwet’en Territory.

“The Provincial Government has prioritized the criminalization of Wet’suwet’en water protectors over the needs of people throughout the province, as two charter planes of RCMP have been deployed on Wet’suwet’en land amidst historic, climate-driven floods,” added the statement by Wet’suwet’en Territory.

The blockade and the evacuation notice was the latest escalation of mobilizations by tribe members, in a nearly decade-long struggle against the CGL pipeline in the province of British Columbia. Crucial sections of the CGL pipeline project go through the Wet’suwet’en native territory, with parts of the land closed off to the tribes.

Indigenous activists and traditional chiefs of the clans and tribes within the Wet’suwet’en have long resisted the construction of the pipeline through their traditional lands. Since September 25, members of the Gidimt’en clan have set up a blockade at Coyote Camp and elsewhere, blocking drilling sites and the proposed pipeline routes. The blockade has brought the entire project to a standstill.

While TC Energy’s project has been backed by an injunction by the British Columbia Supreme Court which permitted the work to continue, Indigenous groups have argued that the lands were never ceded and any construction on it requires the consent of the traditional tribal leaders.

They have also countered TC Energy’s argument of having secured consent from band council chiefs elected under the provisions of the controversial Indian Act, and instead cited a 1997 Canadian Supreme Court judgement that the aboriginal title for Wet’suwet’en lands have never been extinguished.

The Indigenous tribes have opposed the pipeline project over concerns of encroachment of native lands, the possibility of oil spills and how it can affect the rivers on the lands (crucial source of water for the locals), and also environmental degradation that such a large fossil fuel project contributes to.

According to the Gidimt’en tribe, CGL was given 8 hours to evacuate their worksites, but did not do so as of Monday, November 15. Even after being granted a two-hour extension that the company requested, they chose to keep their workers in the land and in turn blockaded a key access route to the protest camp.

Thursday’s crackdown on Indigenous protesters is the third such intervention by the RCMP since 2019, to clear Indigenous checkpoints and blockades. Previous crackdowns and arrests attracted a nationwide uproar over the police high-handedness against Indigenous activists and community elders.

UPDATE FROM COYOTE CAMP INVASION 2021
15 supporters have been arrested, all for breaches of the injunction. No criminal charges. They will be brought to Smithers for bail hearings tomorrow. pic.twitter.com/4vw5dOABhn