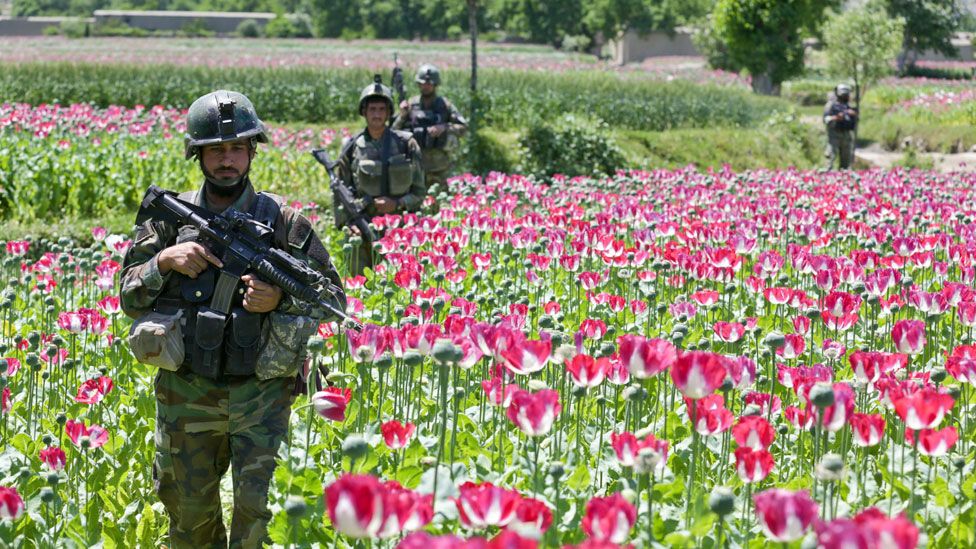 On September 11, 2001—a day that will live in infamy in U.S. history—hijacked planes hit the World Trade Center in New York City and one side of the Pentagon in Washington, D.C., which experienced destruction. President George W. Bush’s administration started a war in Afghanistan on October 7, 2001, after quickly blaming Osama bin Laden, al-Qaeda, and Afghanistan’s Taliban for harboring bin Laden.

The Bush administration, however, had spurned an agreement by which the Taliban would have turned over bin Laden which was agreed to following al-Qaeda’s bombing of the U.S.S. Cole in October 2000. According to Kabir Mohabbat, an Afghan-American businessman and State Department envoy to the Taliban, by the end of 1999, in the face of crippling U.S. sanctions, the Taliban had come to see bin Laden and his training camps as “just a damn liability.”

The fact that the Taliban then were hostile to bin Laden, and wanted to turn him over but were refused, indicates that the Bush administration had ulterior motives for invading Afghanistan. These motives apparently included gaining access to resources, particularly opium, to boost the US-dominated Western financial system.

While organizations such as Architects and Engineers for 911 Truth’s nearly 3,500 industry professionals have provided a mass of evidence on the pre-planned demolition of the twin towers and World Trade Center 7,[1] Professor Peter Dale Scott and others unearthed evidence on the Bush administration’s real reason for invading Afghanistan. They say it was for access to its poppy fields and its proximity to oil resources.

Prof. Scott quoted a Foreign Military Studies Office of Fort Leavenworth article published three months before the World Trade Center destruction. It discussed the large inland sea to the west of Afghanistan, through which oil companies proposed a key pipeline: “The Caspian Sea appears to be sitting on yet another sea—a sea of hydrocarbons [oil, gas, etc].”[2]

The U.S. had also identified vast Afghan mineral resources, including copper, cobalt, gold and, perhaps most importantly, critical industrial metals like lithium. The Pentagon stated that lithium deposits they found could lead the country to equal or surpass the world-leading supply found in Bolivia. Lithium is increasingly used in batteries of all kinds, from household to auto and airplane, and in various types of electronic equipment.[3]

Additionally, a number of sources, such as Minot State University’s Rural Methamphetamine Education Project, offer an interesting side note regarding lithium’s use in underground methamphetamine labs: “Lithium metal is a key element in the clandestine production of methamphetamine. Lithium is used as a reducing agent during the chemical process.”[4]

Reuters [British AP] confirmed that a guerrilla warfare training camp in Afghanistan was “set up in the early 1980s by the CIA and [Pakistani] ISI and run by … [Gulbuddin] Hekmatyar.” Hekmatyar founded a Muslim Brotherhood-style organization in Afghanistan, Hizb-i-Islami. It eventually became a leading component of the CIA-backed mujaheddin resistance to the Soviet Union.[6]

In his book The Politics of Heroin, Professor Alfred W. McCoy stated that Hekmatyar’s organization had hundreds of heroin refineries, and they targeted the Pakistani people, increasing heroin addiction there from 5,000 users in 1980 to 1.3 million by 1986.

This was further confirmed in a 1990 front-page article in The Washington Post which stated that according to a senior White House official, Gulbuddin Hekmatyar and the Pakistan ISI were American allies involved in heroin trafficking.[7]

The increased CIA involvement in the Golden Crescent area for poppy fields along the border of Pakistan and Afghanistan contributed to the ever-increasing opium production there. After a growth to 1,200 tons in 1978, it increased more than three-fold in the next twenty years. The United Nations said Afghanistan’s opium production had risen to 4,600 tons in 1999, or seventy percent of the world’s crop.[8]

Before September 11, 2001, a major change took place in Afghanistan that affected the world’s opium trade. The Taliban controlled most of the country at that time and, by 1999, they were profiting the most, in supplying a great majority of the world’s heroin.

In July 2000, as confirmed by a United Nations report printed in The Washington Post, the Taliban supreme leader, Mullah Mohammed Omar, imposed a ban on opium production in Afghanistan.

The New York Times also printed the 2001 headline “Taliban’s Ban on Poppy a Success, U.S. Aides Say.” That ban “resulted in 70% of the world’s illicit opium production [4,600 tons] being virtually wiped out at a stroke” that year. The Taliban reportedly did this for religious reasons.[9]

The Northern Alliance, also known as the United Front for the Salvation of Afghanistan, had formed in 1996 as an opposition group to the Taliban. The CIA backed them, as they tried to counter the opium ban in Afghanistan in 2000.

The Northern Alliance’s drastically low production went on for only 15 months, before the U.S. and other Western countries invaded on October 2, 2001. The timing of the Afghanistan invasion leaves the impression that a motive was to regain control over the opium-producing poppy fields. Besides illicit opium and heroin, opiates are used in various medicines.[11]

After the Afghanistan invasion, the U.S. and British forces put Hamid Karzai in power. Karzai had represented the Northern Alliance/United Front.

In early October 2008, The New York Times published evidence suggesting that Hamid’s brother, Ahmed Wali Karzai, protected caches of heroin found by lower-level Afghan authorities. The article claimed solid evidence of Ahmed Karzai’s drug trafficking, and noted that even the “White House believes Ahmed Wali Karzai is involved in drug trafficking,” though they only talked about him being a political liability.[12]

Several weeks later, The New York Times printed another article stating that Ahmed Karzai had been on the CIA’s payroll for the past eight years. BBC News reported that, by 2007, the 8,000-plus tons of Afghan opium production almost doubled any previous production.[13] In his book American War Machine, Prof. Peter Dale Scott quoted a U.S. State Department source stating that the country accounted for “93% of the world’s opium.”

Prof. Scott also cited a 2006 report to the World Bank which stated that, “at the top level, around 25-30 key traffickers … [worked] closely with sponsors in top [Afghan] government and political positions. Prof. Scott further noted how the CIA worked with Ahmad Shah Massoud, Colonel Abdul Razik, Haji Zaman (who “British and American officials persuaded to return” to Afghanistan in 2001), Sher Mohammed Akhundzada, and Haji Bashar Noorzai who were all involved in drug trafficking.[14]

A former U.S. Assistant Secretary of Housing and Wall Street insider, Catherine Austin Fitts, explained a little-known aspect of illicit drugs’ huge effect on the U.S. stock market. Fitts had worked in the first President Bush administration and was managing director and a member of the board of directors of Dillon, Read & Co, considered one of the “Wall Street dynasties.” She later started The Solari Group, Inc.[15]

Fitts suggested that the CIA and Department of Justice had created a secret understanding that permitted the CIA to help its allies and assets to traffic in drugs with impunity. Scholars like Alfred McCoy and Peter Dale Scott have documented how CIA assets trafficked Southeast Asian opium from the Golden Triangle during America’s second longest war in Vietnam. Senator John Kerry (D-MA) led a Senate investigation that documented U.S. governmental complicity with drug traffickers in Central America in the 1980s, which was reported on by mainstream publications like the Washington Post. A CIA Inspector General’s report confirmed that covert networks which supplied arms clandestinely to the Nicaraguan Contras (counter-revolutionaries), were bringing narcotics back into American cities with the “blessing of U.S. officials” at the height of the urban drug epidemic.[16]

Fitts referred to money made from illicit drug sales as “narco dollars.” She said “The power of narco dollars comes when you combine drug trafficking with the stock market,” detailing how narco dollars exponentially increase the value of a company’s stock. She explained that stocks are valued at 20 times their income so, “for every $100,000 of income [a company] makes, its stock [total market capitalization] goes up $2 million.”[17]

According to Fitts, banks and many other companies “launder” money from drug sales in their company’s income to increase their stock market value. Laundering means taking the cash from drug dealers and listing it in their income reports as part of their sales. With the 20 times increase in the stock value of the company that owns the restaurant and banks, it’s easy to return the money to the drug dealer in other ways that launders it of its source from the illegal drug trade, and hides it from the Internal Revenue Service.[18]

Whatever one makes of Fitts, the uncanny overlap of America’s foreign interventions and the world’s top drug traffickers is cause for concern. As one of the most lucrative international trades, proceeds from drug trafficking cannot but have some considerable impact on the dollar-dominated global financial system.

The head of the United Nations Office on Drugs and Crime agreed with Fitts on the role of all this cash keeping some banks afloat, noting that during the bank crisis of 2008 and 2009, a number of “inter-bank loans were funded by money that originated from the drugs trade … there were signs that some banks were rescued that way.”[19]

The International Monetary Fund stated, “The amount of money laundering occurring on a yearly basis could range between … $600 billion and $1.5 trillion.” U.S. lawmakers believe that “half is being laundered through U.S. banks.” A majority of this money revolves around the drug trade.[20]

In a 2001 report, Correspondent Banking: A Gateway for Money Laundering, Senator Carl Levin of Michigan, the ranking Democrat on the U.S. Senate Permanent Subcommittee on Investigations, released the results of a year-long investigation on how foreign banks use U.S. banks to launder money.

One of its many findings was that U.S. banks were working with foreign banks and “Laundering illicit proceeds and facilitating crime by accepting deposits or processing wire transfers involving funds that the high-risk foreign bank knew or should have known were associated with drug trafficking.”[21]

According to Professor James Petras, “U.S. banks have developed a highly elaborate set of policies for transferring illicit funds to the U.S., investing those funds in legitimate businesses and legitimating them … [to] buttress a fragile empire.”[25]

Headlines in France and elsewhere have stated, “The Taliban vow to ban opium again.” While President Biden’s Afghanistan pullout appears commendable, it is uncertain what impact the decline in opium production will have upon the Western financial system if the Taliban’s opium ban is successful.

John Potash is the author of two books: The FBI War on Tupac Shakur (2nd ed), and Drugs as Weapons Against Us: The CIA War on Musicians and Activists. Both books have been made into films. John’s work can be found at johnpotash.com and he can be reached at: jlpotash@gmail.com.