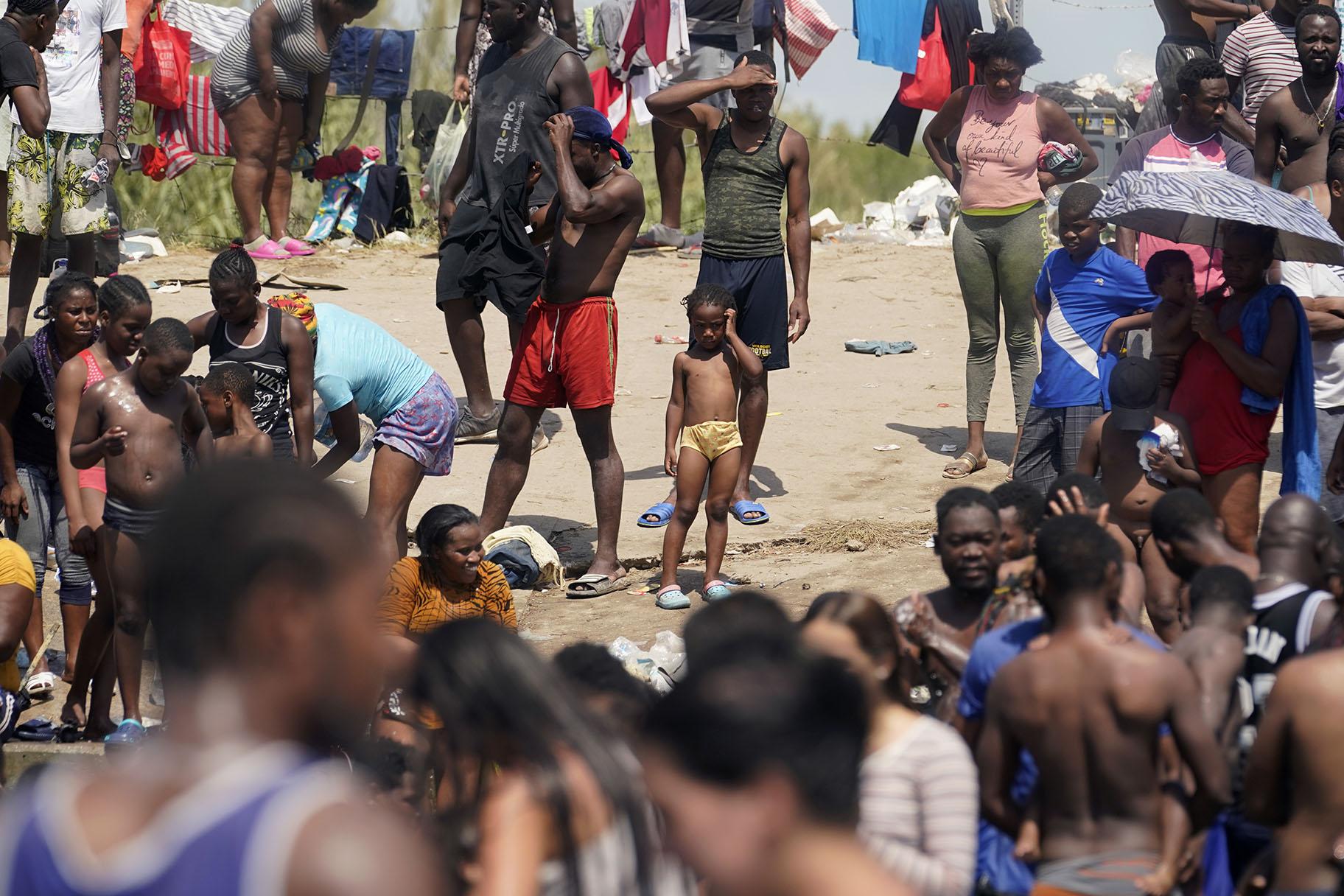 People trying to migrate to the U.S. tell their stories, which have been collected from media reports.

Migrant Charlie Jean had crossed back into Ciudad Acuña from the camps to get food for his wife and three daughters, ages 2, 5 and 12. He was waiting on the Mexican side for a restaurant to bring him an order of rice.

“We need food for every day. I can go without, but my kids cannot,” said Jean, who had been living in Chile for five years before beginning the trek north to the U.S. It was unknown if he made it back across and to the camp.

Some of the migrants at the Del Rio camp said the recent devastating earthquake in Haiti and the assassination of Haitian President Jovenel Moïse made them afraid to return to a country that seems more unstable than when they left.

“In Haiti, there is no security,” said Fabricio Jean, a 38-year-old Haitian who arrived in Texas with his wife and two daughters. “The country is in a political crisis.”

Gary Monplaisir, 26, said his parents and sister live in Port-au-Prince, but he was not sure if he would stay with them because to reach their house he, his wife and their 5-year-old daughter would cross a gang-controlled area called Martissant where killings are routine.

He moved to Chile in 2017, just as he was about to earn an accounting degree, to work as a tow truck driver. He later paid for his wife and daughter to join him. They tried to reach the U.S. because he thought he could get a better-paying job and help his family in Haiti.

“We are always looking for better opportunities,” he said.

Some migrants said they were planning to leave Haiti again as soon as possible. Valeria Ternission, 29, said she and her husband want to travel with their 4-year-old son back to Chile, where she worked as a bakery’s cashier.

“I am truly worried, especially for the child,” she said. “I cannot do anything here.”

The prospect of deportations weighed heavily on the camp’s residents, some of whom traversed continents over months to reach the border.

“They cannot send us back to Haiti because everyone knows what Haiti is like right now,” said Haitian migrant Wildly Jeanmary late on Sunday, wearing only boxer shorts and standing on the Mexican side of the river after crossing it.

Drenched, he cited July’s presidential assassination as a reason not to return with his wife and their 2-year-old daughter to the poorest country in the Americas. Haiti was also hit by a major earthquake last month.

“The government of the United States has no conscience,” said Nerlin Clerge, another Haitian migrant who stood near the riverbank and had traveled to the camp with his wife and their two young sons. He said he is now considering applying for the right to stay in Mexico.

Many, like Haitian migrant Alex Rosiere, fear returning to their homeland.

Marie Pierre, 43, stood on the Mexican side of the river as night fell with hundreds of other migrants unsure what to do. She said Border Patrol agents had separated her from her 19-year-old son in Texas and she did not know if he had been deported or not. She waited for a chance to charge her phone, hoping to get news from her sister and cousin in Florida.

“They told me he was an adult and could not be with us,” she said of the moment they were separated. “It is not right,” said Haitian migrant Jean Philipe Samus. “The Americans are grabbing Haitians and deporting everyone to Haiti. Haiti has no president, no jobs, there is nothing. In the earthquake a lot of people died. It is not right over there, I am going back to Mexico.”

U.S. should not punish Haitians at the border. This country is to blame for their misery

In an opinion piece in Miami Herald on September 20, 2021 Brian Concannon, human-rights lawyer and board member of the Institute for Justice & Democracy in Haiti, wrote:

The United States can only reduce migration pressure from Haiti by ending decades-long policies that have undermined Haiti’s democracy and economy and forced Haitians into the desperate measures we see at Del Rio.

The airlift will deliver its passengers to a dangerous and unstable country. In the past 10 weeks, Haiti has endured the assassination of a president (still unsolved), an earthquake, a tropical storm and pervasive gang violence. But the people at Del Rio left Haiti long before the July 7 murder of President Jovenel Moïse. Most left years ago, part of the steady flow of Haitians fleeing the increasing corruption, brutality and poverty of the administrations of presidents Moïse (2017-2021) and Michel Martelly (2011-2016), who governed Haiti for most of the past decade.

Martelly came to power after the Obama administration forced Haiti’s electoral council to change the results of the 2010 preliminary elections, placing Martelly in the runoff. He and his hand-picked successor, Moïse, enjoyed persistent support from the Obama and Trump administrations, despite spectacular corruption, government-linked massacres and the resolute dismantling of Haiti’s democratic structures.

President Biden continued this support, backing Moïse’s effort to extend his term and a self-serving, illegal constitutional amendment process. The U.S. continues to prop up Moïse’s prime minister, Ariel Henry, despite more electoral manipulation and Henry’s firing of a prosecutor for suggesting that the prime minister’s 4 a.m. calls with a principal suspect in the Moïse assassination be investigated.

The United States has been destabilizing Haiti — and generating refugees — since the country emerged from a slave revolt in 1804 into a world run by slaveholding countries that felt threatened by the example of successful, self-emancipated Black people. The United States immediately imposed an embargo on Haiti and refused to even recognize the country’s sovereignty until 1864, just after our Emancipation Proclamation. Haitians started fleeing in large numbers in the 1980s, in response to terror inflicted by the U.S.-supported dictatorship of Jean-Claude Duvalier. They came in overwhelming numbers after the 1991 overthrow of President Jean-Bertrand Aristide, fleeing the brutal FRAPH death squad — which also received U.S. support — and again when another brutal regime replaced Aristide after the Bush administration forced him into exile in 2004.

The United States has also undermined Haitians’ ability to provide for themselves in their own country. President Bill Clinton apologized in 2010 for forcing Haiti to reduce tariffs on U.S. rice, which allowed subsidized rice from this country to overwhelm the markets and put Haiti’s farmers out of business. The United States also imposed a development assistance embargo on Haiti in 2000, because it did not like the elected government’s progressive economic policies. When Haiti’s President Rene Préval tried to raise the country’s minimum wage to $5 a day in 2011, the United States forced him to cut it to $3 per day, about one-quarter of the minimum needed to support a small family.

The Biden administration knows that it cannot reduce migration pressure at our border without addressing the root causes forcing people to flee their homes. It even issued a strategy for doing so in Central America in July. But this strategy is mostly suggestions for other governments, with some promise of U.S. help. It includes zero discussion of changing the U.S. policies that have been driving immigration from Central America, or Haiti. If the Biden administration is serious about reducing the crisis in our border, it will start by looking in the mirror.