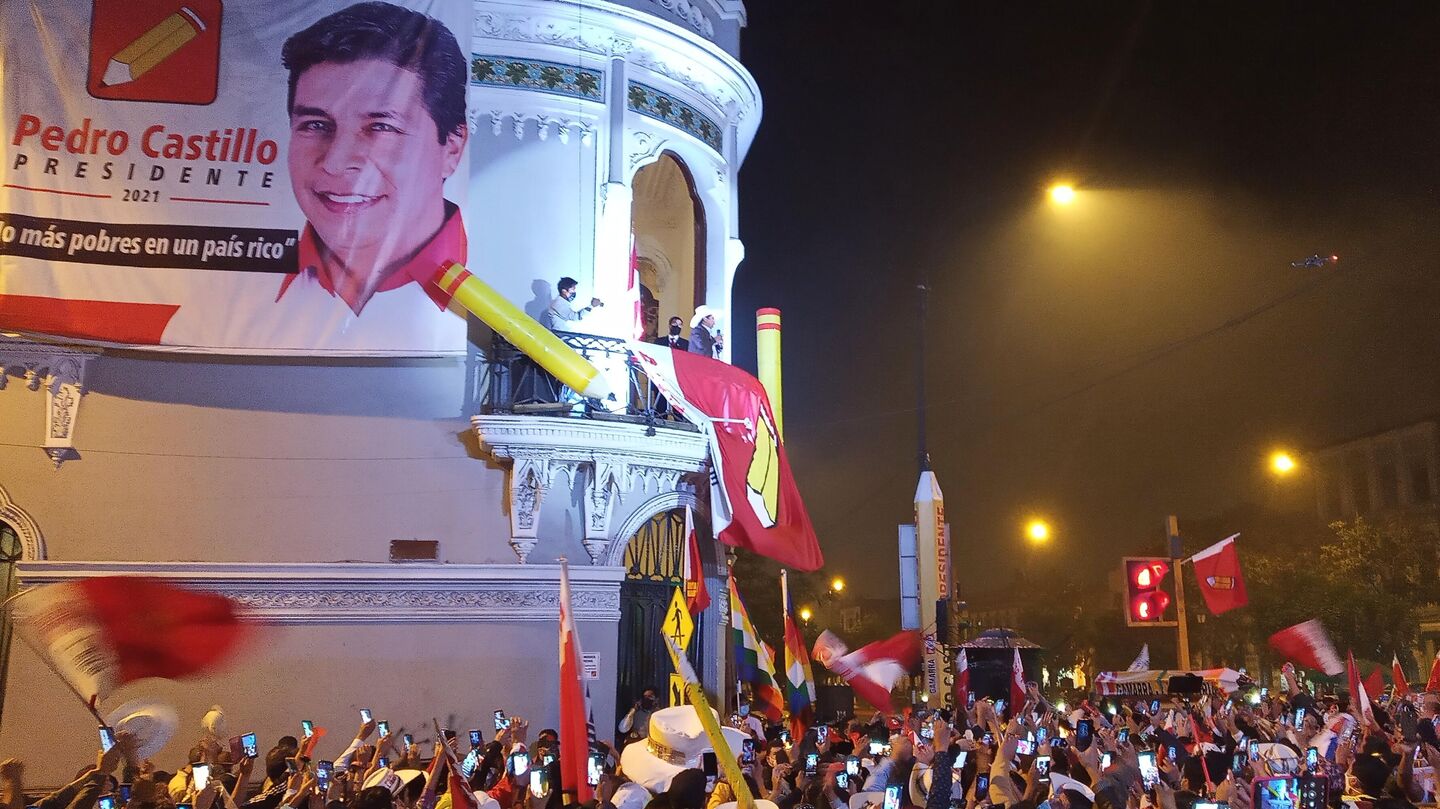 Pedro Castillo won the elections in Peru, but has not yet been declared president. Keiko Fujimori seeks to disavow the results through different procedures that postpone the official announcement and plunge the country into multiple tensions, a situation that could drag on for days or weeks.

“Why do I support Professor Castillo? Because he is clear about the constitutional reforms that the country requires, and many of these reforms affect the interests of the great economic powers that today are entrenched in the State, in collusion with the corrupt governments in power”, says Carlos Manchego, behind a banner that reads: Ica Region Campaign Command.

Manchego is in Lima together with a group of people from the city of Chincha, in the province of Ica. They are not the only ones: delegations from various parts of the country arrived in the capital, in defense of Pedro Castillo’s presidential victory.

“The people are self-convening using their own resources to support Castillo and implement the ideas and reforms he intends to make in favor of the Peruvian people”. Manchego expects Castillo to speak from the balcony of what is known as the teacher’s house, where he has already spoken on several occasions since the vigil began, on the very night of the elections, June 6.

This time there is more celebration than on previous nights: the National Office of Electoral Processes (ONPE) has finished counting 100% of the votes and Castillo won over Keiko Fujimori. The professor, as he is popularly called, obtained 50.12%, 44,058 votes more than his opponent.

Castillo won, but the dispute over the result is not yet over, something that is perceived among those who are, once again, mobilized. The National Jury of Elections (JNE) has yet to declare victory, which is why another group of people stand outside the headquarters of the electoral power.

“I ask the electoral authorities that once and for all they stop dragging their feet to continue causing anxiety to the Peruvian people and respect the will of the people”, says Castillo from the balcony, with his characteristic white hat, in another night of fireworks, vuvuzelas, red and white flags with the pencil of the presidential campaign.

What is missing to proclaim Pedro Castillo president

“In practical terms Pedro Castillo is the president of Peru, in absolutely formal terms it remains for the electoral authority to resolve the nullity requests presented by Keiko Fujimori and proceed with the proclamation,” explains Ronald Gamarra, human rights defender, lawyer and former anti-corruption prosecutor, in conversation with Sputnik.

Fujimori complained of the existence of a “planned and systematic” fraud since Monday night, June 7. She said that Peru Libre, the party for which Castillo ran, had carried out “fraud at the polling station”, altering the voting records through different methods. The denunciation was followed by the presentation of a request for annulment of hundreds of minutes before the JNE and their evaluation in the National Juries of Elections (JEE) by regions.

“The fujimorismo has presented 942 requests for the nullification of polling stations, of which 803 have been rejected, 753 for being inappropriate and 50 for being unfounded, the resolutions of various JEE have the same conclusion, the nullification requests are not appropriate”, explained Gamarra on Wednesday, June 16.

The strategy of Fujimorismo “seems to be a game of lawyers and the presentation of appeal after appeal after appeal,” he affirms. “These nullities that have already been initially resolved may be subject to appeal before the JNE, and I have no doubt that this would not end there, but that fujimorismo is going to try to file other legal actions, to question the decisions of the JNE or to disregard the election of the president.”

According to the lawyer “there is no way for the results to be altered, Pedro Castillo is the president of Peru, period”. So far, Fujimori’s claims of fraud have been proven false: “They have no basis and the JNE is going to clarify this”.

Of the 733 JEE resolutions on the requests for the nullity of polling stations presented by Keiko -all of them rejected-, the Fujimori party has appealed 160 of them.

The electoral body did not state when this announcement could take place. “There is no determined deadline (…) we are not talking about the presentation of one or two appeals, we would be talking in principle of hundreds of challenges, and that is impossible for a court of justice to handle, at least not in terms of the nearest deadlines, this would have to lead the JNE to look for ways to accumulate cases, resolve them by subject, grounds and arguments.”

Fujimori’s strategy will surely be to question the JNE’s final resolution, as part of the strategy of not recognizing the democratic result and prolonging a dangerous crisis.

The delay of the results is taking place in a climate of tension, with mobilizations of both those who defend Castillo’s victory and those who maintain the existence of a fraud to Fujimori’s detriment.

“I am here to prevent communism from coming to power, brother. There has been fraud since the first round, Fuerza Popular is claiming to annul 800 precincts, if they annul 400 precincts, Keiko wins. My opinion is that there should be general elections again, the evidence has been shown on television”, said Eduardo Porras in the event organized by Fujimori before the announcement of the ONPE results.

The presidential candidate, once again, did not recognize her defeat and called on her followers to resist. “The most important thing is still to be done, the evaluation of the pending reports that the JNE has (…) the more than 800 with nullity requests”, she affirmed.

The idea of new elections has been installed among those who denounce that there was fraud. Kathy Justo, another Fujimori supporter, supports the same idea: “I think there is a lot of fraud, they have been doing it since the first round, there is a lot of evidence, the votes are not as they should be, everything has been arranged by President Vizcarra who arranged the president of the ONPE to carry out this fraud. Both elections should be invalidated and there should be new elections”.

The call to disregard the result has meant an escalation of increasingly worrying actions on the part of Fujimorismo. The house of the president of the JNE, Jorge Salas, has been under siege, and in several major media the speeches have openly called for a coup d’état.

This is serious, the extreme right no longer hides its intentions and is calling for a coup d’état. But Butters is such a coward that he does not dare to lead the takeover of the Government Palace.

What they do in Willax is a crime. Let’s see if the @FiscaliaPeru does something. pic.twitter.com/S2ON0oVRsI
– No to Keiko (@noakeikope) June 15, 2021

In this context, the Armed Forces issued two communiqués in the span of a week, to reaffirm their adherence to the constitutional order, and the ONPE used its Twitter account to deny false news aimed at propagating the matrix of fraud. The Council of State, for its part, issued a statement on Tuesday, headed by the signature of President Francisco Sagasti, calling for “respect for State institutions and dissenting opinions” and opposing the promotion of “forms other than” elections to “access power.”

We share the Declaration of the Council of State 03-2021. pic.twitter.com/zKzvLnCMuN
– Presidency of Peru (@presidenciaperu) June 16, 2021.

Those backing Castillo have called for a national mobilization for Saturday, June 19, under the slogan “For the defense of democracy and the homeland, no to the coup! It will be a new demonstration of support for the victory of the man who won under the slogan “no more poor people in a rich country”, and the call to carry out a constituent process to put an end to the 1993 Constitution written under the presidency of Alberto Fujimori, who laid the foundations of the neoliberal model.

This scenario of mobilizations, protests, escalation of actions on the part of Fujimorism, could continue until the announcement of the JNE and beyond, in the event that Keiko Fujimori’s strategy is to continue ignoring the results. The defeated candidate also faces a trial for money laundering that could result in thirty years in prison. “As they say in Lima, either she is president or she is a prisoner”, says Gamarra.

The pro-Fujimori strategy has the country on standby and on alert, foreshadowing what will surely be an attack on the government to be headed by Castillo as of July 28, the day of the inauguration.

“Castillo’s government is going to be precarious in the sense that he does not have a majority in Congress, but rather he has a parliament against him, I believe he could not comfortably carry out his mandate if the shadow of fraud weighs on him”, says Gamarra.

The lawyer is concerned about the social impacts of the current confrontation. “Peru is now a sum of fractures, and the latest one has been added to the existing ones,” he explains. The political divisions expressed throughout these days are a reflection of multiple cleavages, between Lima and the province, between social classes, racism, something that the voting map of June 6 clearly expressed in some points: Fujimori won with around 70 and 80% in wealthy areas of the capital; Castillo, with 70 and 80% in Andean areas.

This new fracture has had yet another effect: it has made evident once again who Keiko Fujimori, Fujimorismo, is, after her campaign with speeches of repentance for past mistakes and promising guarantees of democratic conduct. Thus, she is now opposed not only by those who voted for Castillo and those who were previously part of the anti-Fujimorism in the country, but also people who, having voted for her in fear of a Castillo government, are now disappointed by her refusal to respect the democratic will.