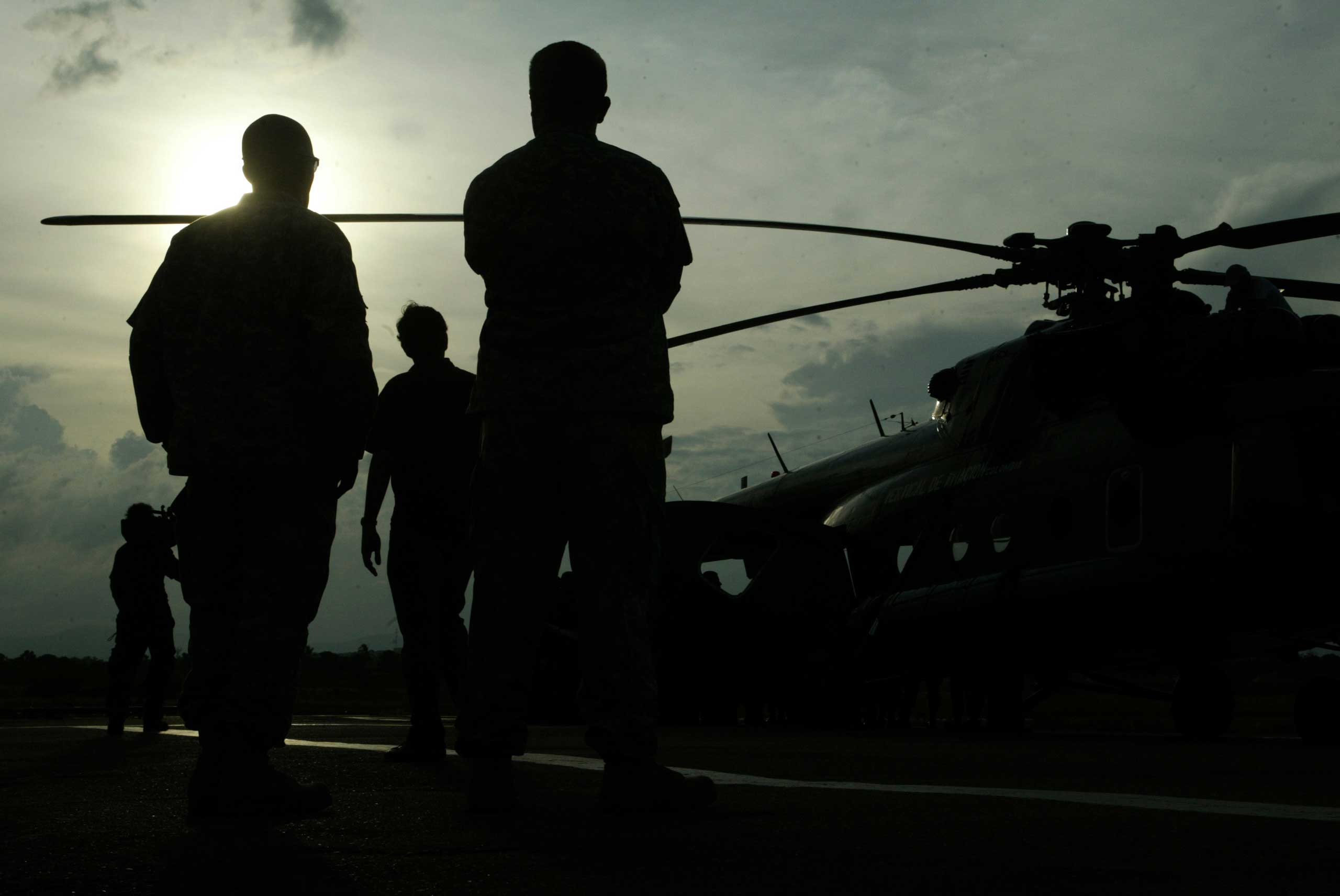 In Latin America and the Caribbean, the army, the DEA, the CIA, and other U.S. agencies, have innumerable bases of operations, facilities, offices, as military agreements that allow them to operate at any time in our territories.

In the past, they claimed that their objective was to combat communism, subversion, revolution, which challenged the capitalist model, but today, “the new threats” are terrorism, drug trafficking, cyber security, natural disasters, criminal organizations, and, lately, they are even concerned about “illegal fishing”. Under these new pretexts they continue to militarize, control and watch over our continent.

In Chile, in 2012, the US Army Southern Command financed the construction, in Fort Aguayo, Concón, a “Peace Operations Training Center”, which Alicia Lira correctly described as a “counterinsurgency” training center. Let us not forget the role played by the “blue helmets”, MINUSTAH, in Haiti, where there are accusations of repression, murders and sexual abuses against the population.

“It is not random that this military base appears in Concón because when a city or a town rises up, as in the case of Aysén, and as the students have done, a counterinsurgency plan is put forward. This follows the dictatorship’s logic of the so-called ‘internal enemy’ and that is what is being applied,” said Alicia Lira, president of the Association of Relatives of the Politically Executed (AFEP).

Although the Minister of Defense, José Antonio Gómez, told SOA Watch in 2015 that this “Peace Operations Training Center” had been closed, the truth is that its facilities, which simulate a city, have continued to be used for military training and that there was and possibly still is a presence of U.S. Marines in Chile.

In addition to all of the above, in April 2018 “exercises” were carried out at Fort Aguayo by US and Chilean troops. It is also known that the US military buys gasoline in Chilean territory, which logically suggests that Chile is a military transit base for the US military.

Peru: The danger of Namru-6

In Peru there are several US military bases and a very particular one is NAMRU-6, which has no less than three facilities, in Lima, Iquitos and Puerto Mandonado. The US Naval Medical Research Unit, or NAMRU-6, investigates infectious diseases, although its facilities could also be used for eventual biological warfare.

Researcher Olga Pinheiro wrote, for the Right to Live in Peace Magazine, an article entitled “ABC of Geopolitics: Biological Warfare” pointing out that “One of its facilities – NAMRU-6 – is located, no less than in the Peruvian Amazon, near the Amazon River, in the city of Iquitos, which should alert us to the serious risk of contamination, dissemination and proliferation of infectious agents”, adding that “there remains the concern about the manipulation of pathogens by foreign military institutions that were directly involved in the development of biological weapons in different periods of history”.

We cannot forget that Cuba has suffered several attacks with Biological Weapons; among them, the intentional introduction of the swine flu virus (1971) and the hemorrhagic dengue (1981). This last attack caused thousands of people to become ill; 158 people died, among them 101 children.

It is also known that in recent years NAMRU-6 opened a branch office inside the Soto Cano Air Base in Honduras, where the U.S. Army’s Joint Task Force-Bravo (JTF-Bravo) operates. This is, together with the US military base in Guantanamo, one of the “classic” military bases where there are US troops, equipment, radars, airstrips, and, of course, weaponry.

“JTF-Bravo carries out a variety of missions in Central and South America ranging from supporting U.S. Government operations to counter transnational organized crime, to humanitarian assistance, natural disaster support and the development of support capabilities,” notes the Southern Command.

We must remember that former president Manuel Zelaya passed through this military base and airport when he experienced a coup d’état in 2009, only to be expelled to Costa Rica. US troops did nothing then to stop this coup. Nor do they do anything today where – not only is the government accused of being involved in serious human rights violations – the government of Juan Orlando Hernandez is accused of being involved with drug trafficking groups.

Add, that it became known, years later, in 2016, that former Secretary of State Hillary Clinton gave her support to the coup d’état in Honduras that overthrew Manuel Zelaya, the democratically elected president.

The School of the Americas continues to operate

Former Panamanian President Jorge Illueca described the School of the Americas, which operated in Panama between 1946 and 1984, as “the largest base for destabilization in Latin America”.

As we know, the School of the Americas had to leave this country as a consequence of the Torrijos-Carter Treaties and was installed, as of 1984, in Fort Benning, in the city of Columbus, Georgia, United States. Since January 2001, its name was changed to deceive the public, and since then it has been called the “Western Hemisphere Institute for Security and Cooperation” (WHINSEC).

It is important for everyone to know that the U.S. continues to train military, police, border guards and civilians from all over Latin America and the Caribbean at the WHINSEC military base at Fort Benning. In addition, WHINSEC instructors travel throughout our continent to provide military training.

It is also important to note that there are more than a hundred other military bases in the United States where troops from Latin America and the Caribbean also receive training. Not to mention the courses or assistance that may be given by the police, FBI, CIA, DEA, USAID, as well as other U.S. agencies, to military, police or civilian troops throughout our continent.

Training, as well as assistance, is vital to achieve ideological and political influence in the minds, mainly in the high commands of the Armed Forces and police that have the monopoly of force in our nations. It was not surprising, then, that in the attempted coup d’état in Venezuela (2002), in the coup d’état in Honduras (2009) and in Bolivia (2019), graduates of the School of the Americas were involved in these events.

The ILEA in El Salvador

We will always remember the atrocities in which the U.S. government was an accomplice against the people of El Salvador. Among them, we will remember that it provided military training, at the School of the Americas, to the Atlacatl Battalion, involved in the crimes of El Mozote and the murder of the six Jesuit priests and two women. We will also remember the name of Roberto d’Aubuisson, a graduate of the School of the Americas, involved in the crime against Monsignor Oscar Romero.

Currently, in El Salvador operates – what some have called a new School of the Americas – the International Law Enforcement Academies (ILEA) where police, prosecutors and judges are trained under the ideological thinking and interests defended by the US and the fight against the “new threats”.

The truth is that, in recent decades, it has emerged as a weapon of combat, the legal war,”Lawfare”, the criminalization and prosecution of leaders and social leaders. If they are not assassinated or disappeared, they are stigmatized, discredited and brought to trial. Many leaders even run the risk of being imprisoned.

In addition to everything we know about the US presence in Latin America and the Caribbean, particularly in Colombia, Panama and other nations, the recent agreement for the use of the Alcântara Aerospace Launch Center in Brazil; the use of the Galapagos Islands, in Ecuador, by the US military; are new antecedents on the continuous forms of militarization that US imperialism continues to develop in our continent to maintain its hegemony.

In concluding this article it is important to remember that Rina Bertaccini – who was president of the Movement for Peace, Sovereignty and Solidarity among the Peoples of Argentina (MOPASSOL) and vice-president of the World Council for Peace – denounced in 2011, at the “V Encontro Nacional da Associação Brasileira de Estudos de Defesa” (ENABED), the contents of the document “Joint Vision 2020” of the US Army in which it is pointed out that today domination is conceived as a “full spectrum”.

“With all crudeness they are warning us what we can expect from the imperialist wars of the 21st century: a global action deployed in all domains: specifically the military with its lethal power, but also on the political, economic, ideological and cultural plane, without limitation or legal or moral constraint of any kind,” Bertaccini stated at the time.