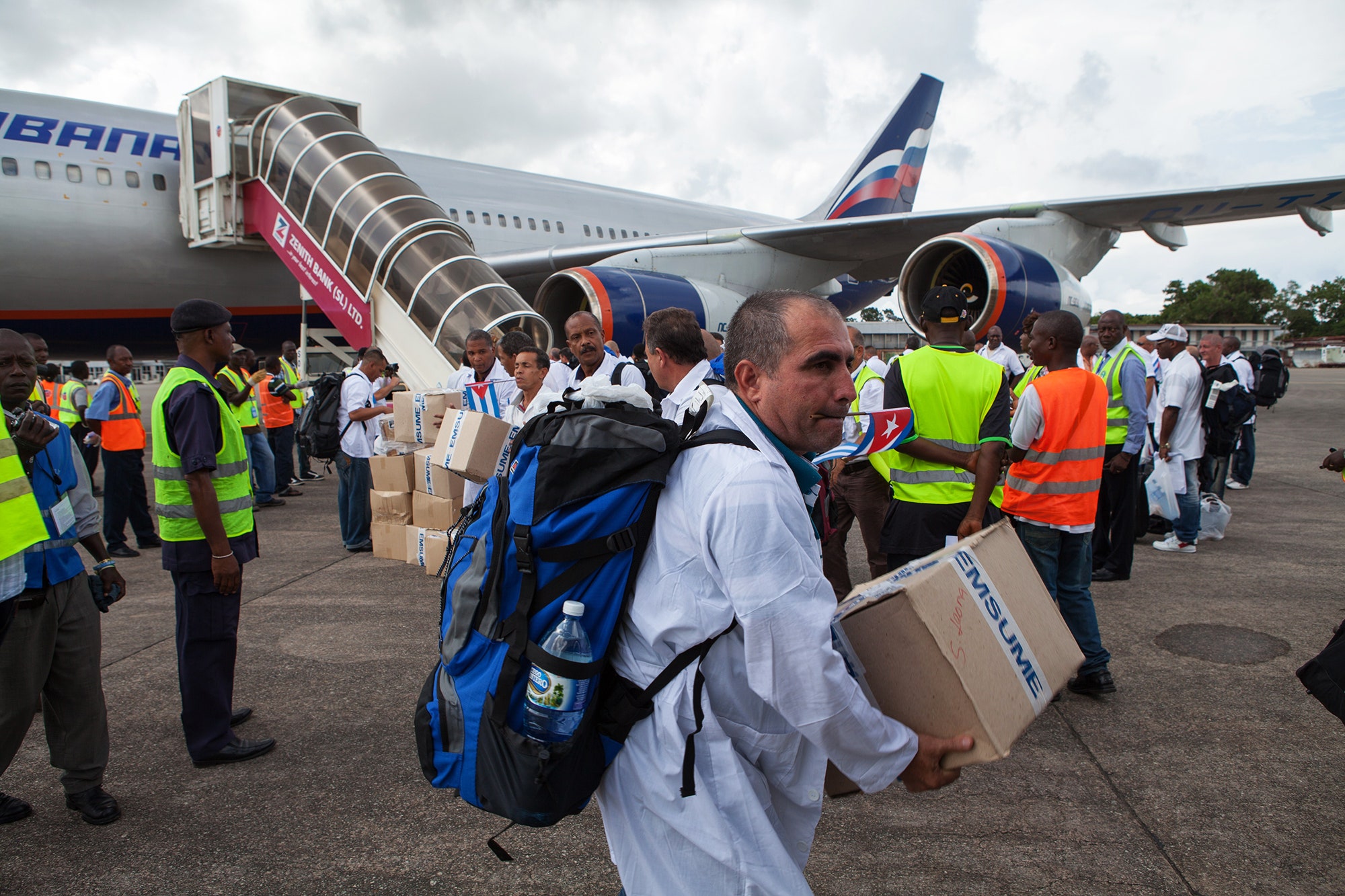 The government of the United States has deployed, as from last year, an intensive and defamatory campaign against the medical cooperation offered by Cuba.

The campaign also include a program designed to fund actions and information searches to discredit and sabotage the international cooperation being provided by Cuba in the health area in dozens of countries for the benefit of millions of persons. This is an endeavor added to the crude pressures exercised against a number of governments in order to obstruct Cuban cooperation.

Cuba is being accused of allegedly engaging in “modern slavery” and “trafficking” in persons working in Cuba’s health system for the purpose of exploitation or for being used to allegedly interfere in the internal affairs of the States they have been assigned to.

The US persecution started in Latin America and has forced the termination of cooperation programs in Brazil, Ecuador and Bolivia.

The persecution and search for information has also included the attempts by US “diplomats” to interrogate the Cuban staff at the very health centers where they work abroad, even in Northern Africa and the Middle East.

It is both immoral and unacceptable that the dignity, professionalism and altruism of the more than 400 000 Cuban health cooperation workers, having accomplished missions in 164 countries during 56 years, are called into question.

Their contribution in the struggle against the Ebola virus in Africa, blindness in Latin America and the Caribbean, cholera in Haiti as well as the participation of 26 brigades of the International Contingent of Medical Professionals Specialized in the Management of Disasters and Extensive Epidemics “Henry Reeve” in Pakistan, Indonesia, Mexico, Ecuador, Peru, Chile and Venezuela, among other countries are quite a feat.

With a similar selflessness and dedication, Cuba has trained, free of charge, 35 613 health professionals from 138 countries.

In those nations faced with the most unfavorable economic condition, Cuba covers almost the full cost of this cooperation. Likewise, and in line with the UN concepts about cooperation among developing countries, this is being offered in other nations based on the principle of complementarity and partial compensation for the services rendered.

Cuban technicians and professionals take part in these programs on an absolutely free and voluntary basis. During the fulfillment of their mission, they continue to receive their full salary in Cuba and also receive a stipend in the country where they offer their services, in addition to other benefits.

In those cases in which Cuba receives a compensation for the cooperation offered, those workers are also worth of credit, for they offer a just and absolutely legitimate contribution to finance and ensure the sustainability and development of the mass and free of charge health care system that is accessible to all Cubans and also to fund the cooperation programs that our country offers in many countries of the world without receiving any payment.

The US crusade against Cuba’s international medical cooperation is an infamous and criminal action against those peoples in need of medical assistance. That could never overshadow the humane and fraternal contribution of the 29 000 Cuban health professionals who, with an enormous sacrifice and a high level of understanding on the part of their families, are currently offering their services to 65 nations. This campaign against Cuban medical cooperation is not only part of the obsession of the current US administration with persecuting and defame everything that has to do with Cuba, but is also an attack against the efforts in solidarity which have received the acknowledgement of the international community and the specific praise from the most senior officials of the United Nations, the World Health Organization and the Pan-American Health Organization.

The history of Cuban medical cooperation began precisely in the African continent, with the arrival of 55 Cuban health professionals to provide services in Algeria in 1963. Since then, more than 400,000 health professionals from Cuba have provided their services in 164 countries of all continents. Cuban medical professionals have worked in countries of the three continents of the third world in the period analyzed, taking professional medical assistance to millions of people without it, in places of very difficult access where they have developed preventive medicine and have worked in epidemiological campaigns They have also participated in dangerous and numerous situations of natural disasters providing their help from the first moments of these produced.

Additionally, more than 35,000 professionals from 136 countries have been trained in Cuban universities and more than 8,000 from around 120 nations are currently studying in Cuba. The positive balance for the lives of millions of people in tens of thousands of communities in Africa, Asia and Latin America and the Caribbean is unquestionable.

With governments and health authorities in many countries of the world, but with a special emphasis on Africa, where resources are scarcer, Cuba has also helped in the foundation of medical schools to train the professionals needed in their own localities with urgency. Ethiopia was one of the first countries in the world that benefited from that experience, through the foundation in 1983, of Jimma Institute of Health Sciences.

At that time, in 1985 Ethiopia had a population of about 40 million inhabitants and only had more than 400 doctors at its disposal and two Medical Schools: one, in Addis Ababa, (Black Lion), and another in Gondar. With Cuba’s cooperation Etiopía was able to benefit from a third School of Medicine that helped the country train the health staff it needed and needs. This was also the third School of Medicine founded by Cuba in other countries and the first in the horn of Africa. Cuban collaboration in the world has earned a high reputation. Among the reasons for this recognition is the willingness of Cuban doctors to go to places where people need them, including some hard-to-reach sites due to natural disasters or epidemics. Precisely, the history of Cuban collaboration in Africa is the first to be highlighted when Cuban solidarity with the peoples is evoked.

Because of the historical results and the work that Cuban health professionals continue to do, contributing to the realization of the right to health of millions in the world and bringing hope, well-being and life to places where others bring weapons, destruction and death, we consider immoral and unacceptable that the dignity, professionalism and altruism of Cuban cooperators continue to be questioned and subject to defamation and slander. In the face of this, we call on all people of good will in the world to reject and denounce this new campaign against Cuba.