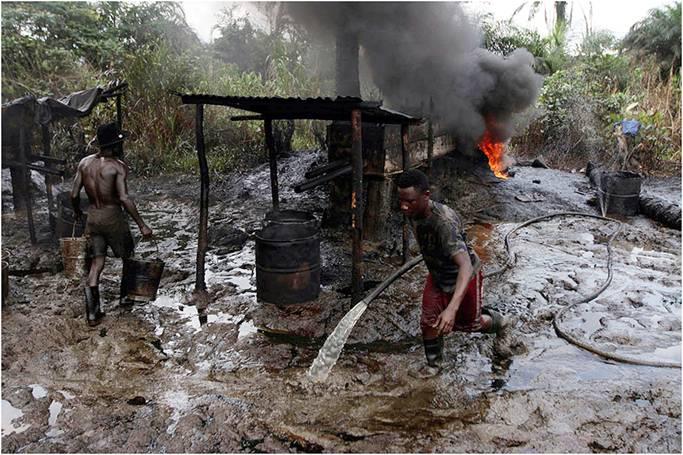 The Niger Delta is a region in the West African country of Nigeria that is known mostly for its vast oil reserves. Like most of Africa, not much more is known about the Niger Delta by most people in the world, particularly those in the West. Equally obscured is the reality that also like much of Africa, the Niger Delta is on fire. You won’t see it on BBC, CNN, CIA, or any of the imperialist news networks, but the people of the Niger Delta have never stopped fighting back against the exploitative practices of Royal Dutch Shell (Shell Oil Company) since Shell started drilling for oil in Nigeria in 1958.

Today, fifteen percent of Shell’s overall oil revenues result from oil extracted from the Niger Delta. Oil from Niger Delta has been providing for the oil needs in the U.S. since the late 50s. Today, the Niger Delta supplies up to 30% of oil consumed in the U.S. annually, often times exceeding that percentage in peak usage months. Shell produces 2 million barrels of oil from Niger Delta on a daily basis. This extensive production translates into over 30 billion USD in oil revenue being pocketed by Shell for the time they have been operating within the Niger Delta. This relationship has worked out perfectly for Shell. The Niger Delta remains a priority oil producing region for them because unlike the other countries in their five or so priority drilling locations, the lack of oversight and necessity to share profits makes the Niger Delta one of the most profitable regions in the world for Shell.

The only entity Shell needs encounter in its Niger Delta operations is the neo-colonial government of Nigeria. The way this relationship works in Africa is the sellout leaders of African countries there specifically to protect the interests of multi-national capitalist corporations in their quest to rob Africa blind, is the corporation pays off the leaders and business operates as usual. This neo-colonial process explains why international oil analyst entities like the United States Energy Information Administration are reporting that 83% of Nigeria’s annual revenues result from oil production and oil accounts for 98% of that country’s entire export portfolio, yet the masses of people in Nigeria have absolutely nothing to show for the massive oil wealth produced in their country. The Niger Delta is a region of 31 million people so it’s basically the same size population as that existing in the U.S. state of California. Yet, while California alone is the fifth largest economy in the world, the Niger Delta is one of the poorest regions on earth. There is a severe lack of schools in the region and nutrition and health are among the poorest in the world. Also, on several occasions, poor working conditions on oil rigs and refineries in the area have resulted in multiple explosions that have killed literally thousands of workers with no compensation or reparations for those harmed in the tragedies. On top of all of those critical issues, the Niger Delta is one of the most environmentally productive wetlands and marine areas on Earth, yet in recent years its been confirmed that leakage from oil pipelines have contaminated the food sources in the water ways in the region that provide the primary food source for those millions of people.

It must be clear that the African masses have never sat still for this continued exploitation. Starting as early as the late 1980s, organized resistance to Shell’s massive looting of the people’s resources have resulted. Movements led during that time by the women of the region resulted in militant strikes against Shell’s oil operations. These acts of civil disobedience brought to the world’s attention the stark contradiction of Shell’s extreme oil wealth compared to the rank poverty of the region. Since that time, the people’s protests have developed even more militancy. In 2006 the Ogoni region, where most of the oil production occurs, began to experience repeated kidnappings of European Shell oil workers. The local Ijaw people started engaging in regular peaceful protests against Shell that continue to this day. There have been organized efforts to blow up Shell facilities as well as those operated by Chinese businesses in the area. Meanwhile, the messaging coming from the Ijaw and other people in the region have focused clearly on the shocking disparity between Shell’s extraction of wealth compared to the lack of basic needs of the people in the region. Since Shell and the capitalist countries it operates out of like Britain and the U.S., depend upon the cheap oil production offered by the Niger Delta to retain those high profit margins, the struggle against this exploitation promises to bring contradictions to a heightened sense of awareness amongst the masses. Shell has been accused by activists repeatedly of sabotaging conditions for the people in the region to maintain its profitability, including pressuring the Nigerian government on multiple occasions to send troops in the region to violently squash peaceful protests. Clearly, the primary objective of the U.S. developed African Command, or Africom – the development of dozens of U.S. military installations in Africa – is to train reactionary armies like that operating in Nigeria to repress popular resistance like that shown by the people of Niger Delta.

The story of what’s happening in Niger Delta is the same story happening in the Congo with coltan or cobalt, produced for cell phones, flat screens, etc. It’s the same story in Ghana around cocoa production. It’s the same story in Guinea for bauxite to produce aluminum products. It’s the same story for all of Africa. And, also like Niger Delta, although you probably won’t hear a peep about it in the capitalist media, we can assure you that the masses of African people in all those areas are rising up in righteous indignation and resistance to this exploitation. All of this is also further evidence that the work of the All-African People’s Revolutionary Party (A-APRP) is even more relevant today than it was when Kwame Nkrumah called for the creation of the party in his landmark “Handbook of Revolutionary Warfare” written 50 years ago. We are inspired by the struggle of women in Niger Delta, the Ijaw people in the Ogoni region there, and all of the courageous struggles against neo-colonialist and imperialist exploitation all over Africa. The A-APRP continues its work to help organize our people to develop capacity to mold those protests into institutionalized resistance that can take our struggle to the next level; moving those imperialist and neo-colonial interests completely out of Africa so that we can regain our rightful place as the caretakers of our own resources. So, we can use those resources for their actual intended purpose, the betterment of life for the masses of our struggling people.