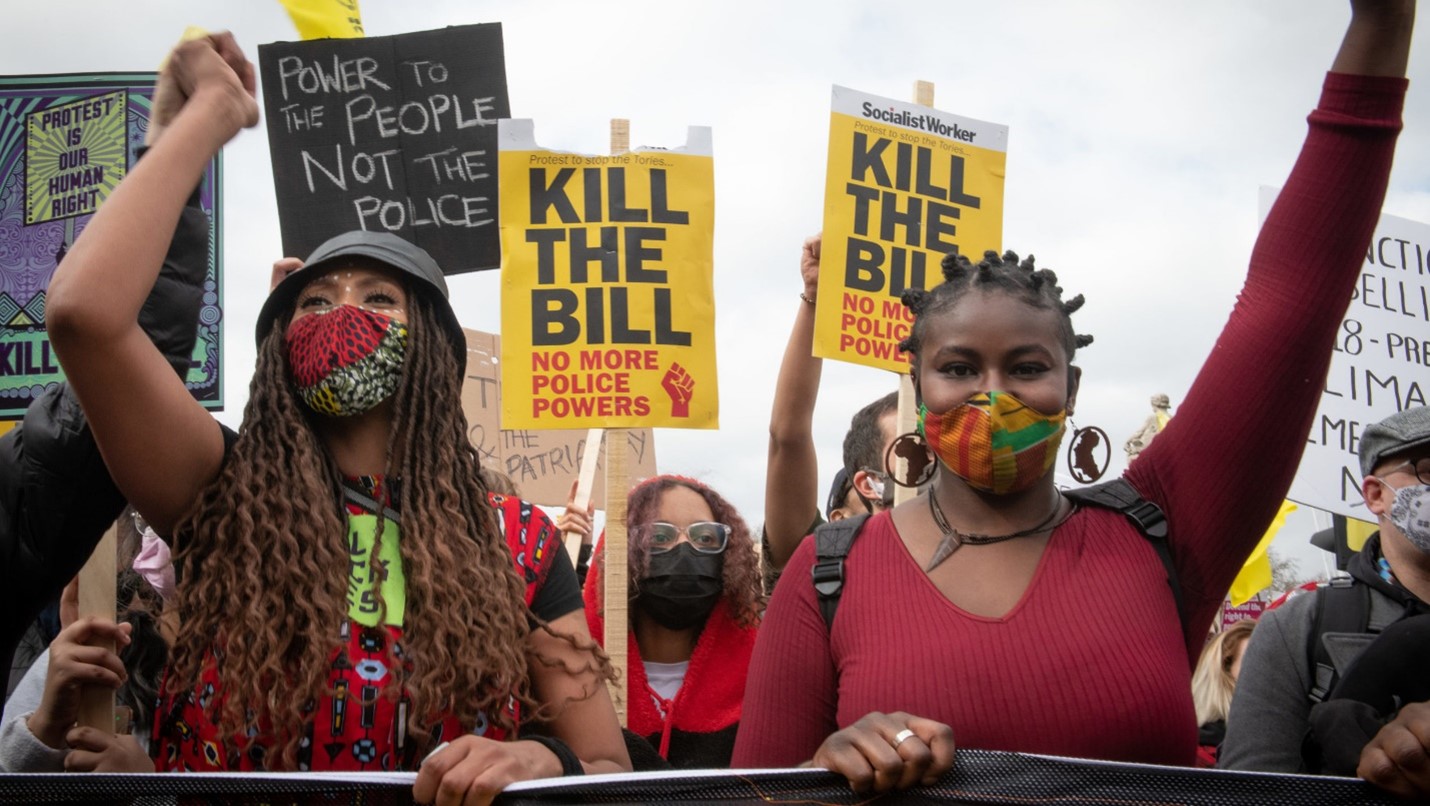 Protesters in some nations are celebrated. Others are ignored. Protest is a human right to be respected but instead can be used as a pretext for nefarious motives such as regime change.

The United Kingdom of Great Britain and Northern Ireland is on the verge of effectively making protest illegal. The Public Order Bill has passed in the House of Commons and is expected to be approved in the House of Lords and become law. The bill will ban any protest that “interferes with national infrastructure” or blocks construction or transportation. It gives police powers to search without “reasonable grounds.” It allows for Serious Disruption Prevention Orders (SDPO) which give police the right to arrest anyone who may have violated these deliberately vague rules and prevents them from attending another protest for up to two years. The ban gives police the right to electronically monitor anyone they think is in violation. These criteria effectively prevent any large scale public protest. Violators of these provisions may be sentenced to up to 51 weeks in jail if found guilty.

The conservative Tory government is poised to pass this Public Order Bill and the “opposition” Labour Party have done precious little in the way of opposition regarding this matter and others like it. The formerly left wing party has signaled that it won’t even utter harsh words towards, much less overturn, the law should they ever return to power.

It is important to keep this in mind as the UK regularly advocates on behalf of protesters in Iran or China. The foreign minister chastised the Iranian government saying, “Today we made our views to the Iranian authorities clear – stop blaming external actors, take responsibility and listen to the concerns of your people.” If British people feel as if their government isn’t listening they can no longer say so in a group public action without risking jail time.

Apparently some protests are deemed to be more worthy than others and the responses to them are entirely political.

Haitians protest en masse against puppet leaders imposed upon them by the U.S. or the oligarchs who stole Petro Caribe funds meant for their benefit. Yet these protests are either ignored or mislabeled as gang activity. Haitian protest is always treated as being unworthy of attention.

Europeans are protesting against their governments too. Germans in Leipzig shouted, “Americans go home ,” demanding that U.S. troops leave that country after a 77 year occupation. In France and the Czech Republic thousands gathered to end their countries’ membership in NATO. These protests are linked to EU governments joining the U.S. in sanctioning Russia, which has created inflation and energy shortages for millions of people. These protests are also ignored or labeled as “far right” in order to deny their legitimacy.

They get little attention in the U.S. for the simple reason that they take place in opposition to Washington’s policies.

People do have the right to protest under international law, but comments from the U.S. and its partners are always tainted by their interference. Iranians protested against the death of a young woman in police custody but the U.S. allows police to kill 1,000 people every year and has a long history of interfering in Iran’s affairs. Many politicians and other opinion makers openly made the case for regime change against that government. This pattern was repeated in China, where protests in response to zero covid policy were said to be protests against the Communist Party of China and the entire political system.

It is best for USians and Europeans to first look at their own nations’ policies and practices before succumbing to the temptation to follow the human rights industrial complex and reach faulty conclusions that benefit their own governments’ malign purposes.

People in this country are living under the world’s biggest prison system, the worst health care system amongst supposedly advanced countries, low wages, and a deliberately frayed safety net. Why do people who live under the risk of incurring thousands of dollars in student loan debt or medical debt see themselves as being freer than people who don’t live under such conditions?

American exceptionalism is a powerful narcotic and it makes otherwise sensible people think that they are better off than they are and that the rest of the world is in need of their protection. U.S. presidents get into office because they lie about what they know the people need. Upon assuming office they suddenly proclaim that their hands are tied and they can’t make good on any of their promises.

Their duplicity requires that others be depicted as evil and that people whose will they deliberately obstruct can be convinced to side with the powerful against the rest of humanity. Of course they don’t tell people that they live in a regime change fever dream and constantly look for ways to undermine the will of people around the world while giving the impression of being beneficent.

Americans and Europeans should learn that their humanitarian concerns must first begin in their own home countries. Then they will know when to opine on the plights of others and perhaps learn that they live under the authoritarian regimes that they think only exist elsewhere.

It isn’t just protest that is politicized in this way. The British media are in a collective snit because a BBC reporter was arrested and briefly detained as he covered protests in Shanghai, China. Of course journalists should be able to do their jobs without fear of punishment, but the UK still holds journalist Julian Assange in jail at the behest of the United States.

Hypocrisy will be the order of the day as long as the US/EU/NATO axis continues its effort to control the whole world. People in Haiti or France or Germany or Iran should all be able to exercise agency and have their desire for sovereignty respected. If they are not able to impact their lives in the way they want it is because of the U.S., the nation most likely to deprive them of their rights.

Margaret Kimberley is the author of Prejudential: Black America and the Presidents. You can support her work on Patreon  and also find it on Twitter  and on Telegram . She can be reached via email at margaret.kimberley(at)blackagendareport.com.