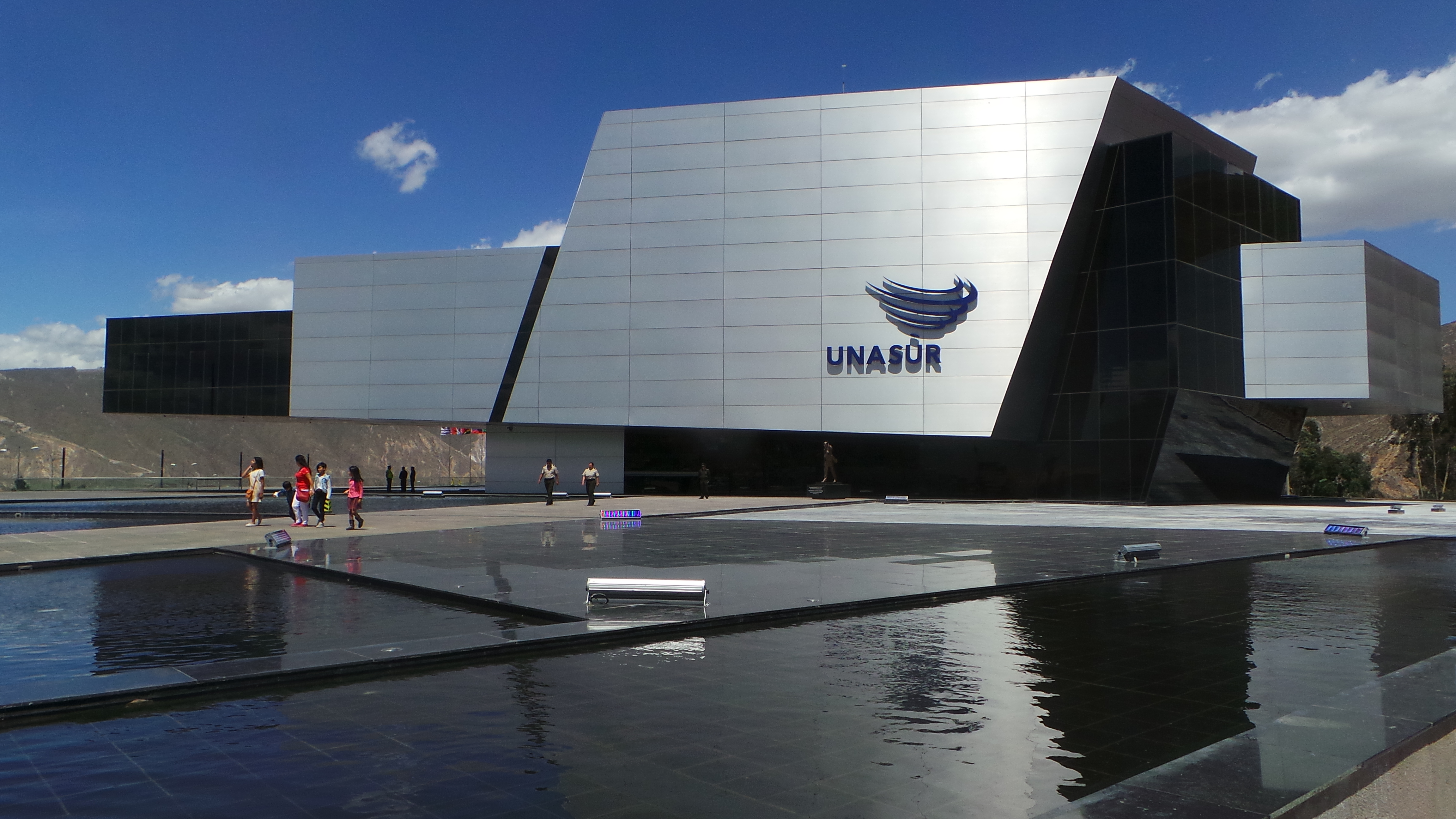 The UNASUR headquarters in Quito, Ecuador

This proposal responds to the call made by the President of the Bolivarian Republic of Venezuela Nicolás Maduro Moros to “retake UNASUR”, as he stated in declarations to the press; it is also part of the development of a research work on the geopolitical vision of Commander Chávez.

A new political moment in the region, for the struggle for integration.

In the geopolitical context that is beginning to be experienced in the region, with the electoral triumph of leftist and progressive parties and organizations, facts that undoubtedly project a new correlation of political force in favor of integration, and cause the emergence of majority opinions and wills inclined to retake the path of cooperation and complementarity among countries. In this new reality, the currents of disintegration begin to lose their influence in decision-making, understanding that a process has been undergoing a process subject to ebbs and flows, in contradictory circumstances of two opposing forces, integration versus disintegration. These opposing currents have been the product of the clash of interests, which has always been present throughout the history of Latin America, where a minority of the oligarchic class, accompanied by anti-national and surrenderist governments, have hindered the sovereign processes of integration, and these have chosen to fracture, divide and hinder, any initiative of encounter and cooperation, of the South American nations. Understanding that the imperial hegemonic interests have always benefited from the disagreements, to impose their design of control and subordination, as happened with the strategy implemented in recent times to fracture UNASUR and hinder the progress of CELAC and ALBA TCP.

To resume the path of integration from the experience lived in UNASUR.

To resume the integrationist roadmap, it is necessary to value that there is a historical accumulation of experience lived in UNASUR, which must be rescued for reflection and learning, placing in the foreground the achievements obtained in its systematic functionality and in the transcendence of the consensus reached in the issues addressed in the sectoral councils of said organization; as well as in the progress in the institutionalization of the decision-making body, led by the Council of Heads of State and Government.

The transcendental aspects practiced that gave new meaning to integration can be summarized in: a) the comprehensive articulation of public policies in the economic, social, political, cultural, security and defense fields, b) the important asset of an integration architecture that responded to a system of ideas based on union and integration, based on the unrestricted respect for the sovereignty, integrity and territorial inviolability of the States and self-determination of the peoples, d) the conception as part of a historical process, of belonging to a southern project, based on the shared history of our nations and the validity of the Bolivarian thought of the union, e) the implementation of a regional work platform, resulting in a new system of relations of cooperation, complementation and solidarity, in an internal dynamic of economic, political, social and cultural relations f) the strengthening of multilateralism, to achieve a balanced multipolar world to project a world in peace, within the framework of the broad validity of international law.

A Transitional Agenda to resume the functioning of UNASUR

Under the premise that it is necessary to build a new consensus that defines a roadmap for South American integration, a transitional agenda is proposed to synthesize the main ideas, programmatic and management bases that will allow UNASUR to resume its functions, within the framework of this new political and geopolitical stage that the region is going through. The proposed agenda is based on the experience lived and its achievements, guided by a strategic thinking of independence and sovereignty of the region and the nations that comprise it; with a vision of assuming South America as a geostrategic power capable of influencing world geopolitics.

Relaunching of a new management model for transition

Within the framework of the Constitutive Treaty of UNASUR, a management model characterized by the strengthening of the political nature of the General Secretariat, as the coordinating body, should be implemented in this new stage. Likewise, the representatives of the Council of Delegates must be given a truly high-level political representation profile. It is necessary to articulate the sectoral councils that make up the institutional framework in five areas of action: social, economic-energy, cultural, political (electoral, human rights) and security and defense; and to consolidate the construction of an alliance platform with the different integration mechanisms, in order to unify criteria regarding the priorities of the international agenda.

The new management concept must have as its backbone the construction of a solid system of democratic and transparent relations throughout the institutional structure of the union, giving greater depth and relevance to the participation of the various social movements and organizations with a view to making the South American integration process binding, which will make it irreversible.

Programmatic emphasis of the agenda

The emphasis of action should have two priority dimensions:

a) A central core of short-term social issues and b) a formulation of action of a Strategic Plan 2023-2030 with those core aspects of integration.

“Now too – Bolívar said-, unity will not fall on us by divine designs, we will have to work for it, because that unity, so longed for, so fought for, so hard fought for, of the last 200 years, always crashed. All the unitary attempts crashed against more powerful forces, against intrigue, against external actions, but also against our own weaknesses, our lack of conscience, our lack – to say it with Federico Nietzche – of will to power or of might, because we lack a lot of will”.

UNASUR (Union of South American Nations) has become the preferred scenario for political dialogue and consensus in South America, is a consensus mechanism comprised of Argentina, Bolivia, Brazil, Chile, Colombia, Ecuador, Guyana, Paraguay, Peru, Surinam, Uruguay and Venezuela. It was established in Brasilia, on May 23, 2008, upon the signature of the Union of South American Nations Constitutive Treaty It is currently paralyzed by various political maneuvers of governments of countries adverse to integration.

Pedro Sassone: Consul of the Bolivarian Republic of Venezuela in Quito, Ecuador. Sociologist with a master’s degree in Development Planning, mention in Urban Regional Planning, Universidad Central de Venezuela. He has served as Director General of Research and Legislative Development of the National Assembly of Venezuela. Representative of Venezuela before the Council of Delegates of UNASUR, representing Venezuela in the negotiation of the Constitutive Treaty of UNASUR; Representative of Venezuela in the General Secretariat of UNASUR, promoting the Forum of Citizen Participation of UNASUR and the Pedagogical Model “Todos Somos UNASUR” (We are all UNASUR). As a militant and organic intellectual of the left, he is developing the research line of systematization of the political thought of Commander Hugo Chávez.