Statue of Fidel Castro, first of its kind anywhere in the world, was unveiled by President Vladimir Putin, Moscow, Nov. 22, 2022

A three-meter-tall bronze statue of Fidel Castro was unveiled on Tuesday in the Fidel Castro Square in Moscow’s Sokol District by Russian President Vladimir Putin and Cuban President Miguel Diaz-Canel in memory of the historical leader of the Cuban Revolution.

Fidel himself was staunchly against creating a cult of personality and in Cuba there are no streets, buildings, institutions or localities named for him. In a speech in 2003, Fidel stated: “There is no cult of personality around any living revolutionary, in the form of statues, official photographs, or the names of streets or institutions. The leaders of this country are human beings, not gods.”

Thus, the only things named in honour of the great revolutionary are located outside Cuba — a park in Vietnam, several streets in South Africa, Namibia, Angola, Tanzania, Mozambique and so on.

The event in Moscow saluting Fidel’s legacy is highly symbolic. From being a “status quoist” state, Russia is rapidly assuming a “revolutionary” role in world politics, challenging the so-called “rules-based order” imposed by the West, and is in the middle of one of the gravest crisis of the post-Cold War era.

The year 2022 happens to be the 60th anniversary of the Cuban Missile Crisis marking the high noon of the Cold War when again Moscow found itself at the centre of a showdown with Washington. The discord then was eerily similar to the one now — over the US attempts to push strategic deployments in Russia’s immediate neighbourhood threatening its national defence and security.

The crisis in 1962 erupted when the US detected the construction of Soviet launch sites in Cuba as retaliation for the US deployment of Jupiter missiles in Turkey. It was addressed through back channel negotiations to reach a deal whereby the Soviet missiles were eventually dismantled and removed from Cuba, while on its part, the US ended its quarantine of Cuba in October 1962 and removed its Jupiter missiles from Turkey by April 1963.

Alas, President Biden, unlike President Kennedy, has refused to negotiate with Russia, and a proxy war ensued in Ukraine. The war could have been avoided and Ukraine’s destruction averted if only negotiations were held to resuscitate the Minsk Agreements that made allowance for some form of regional autonomy for Donbass region within a federated country governed from Kiev. President Biden chose not to take that road (and, of course, the pro-Western Ukrainian leadership in Kiev felt encouraged to undermine the Minsk Agreements as such.) 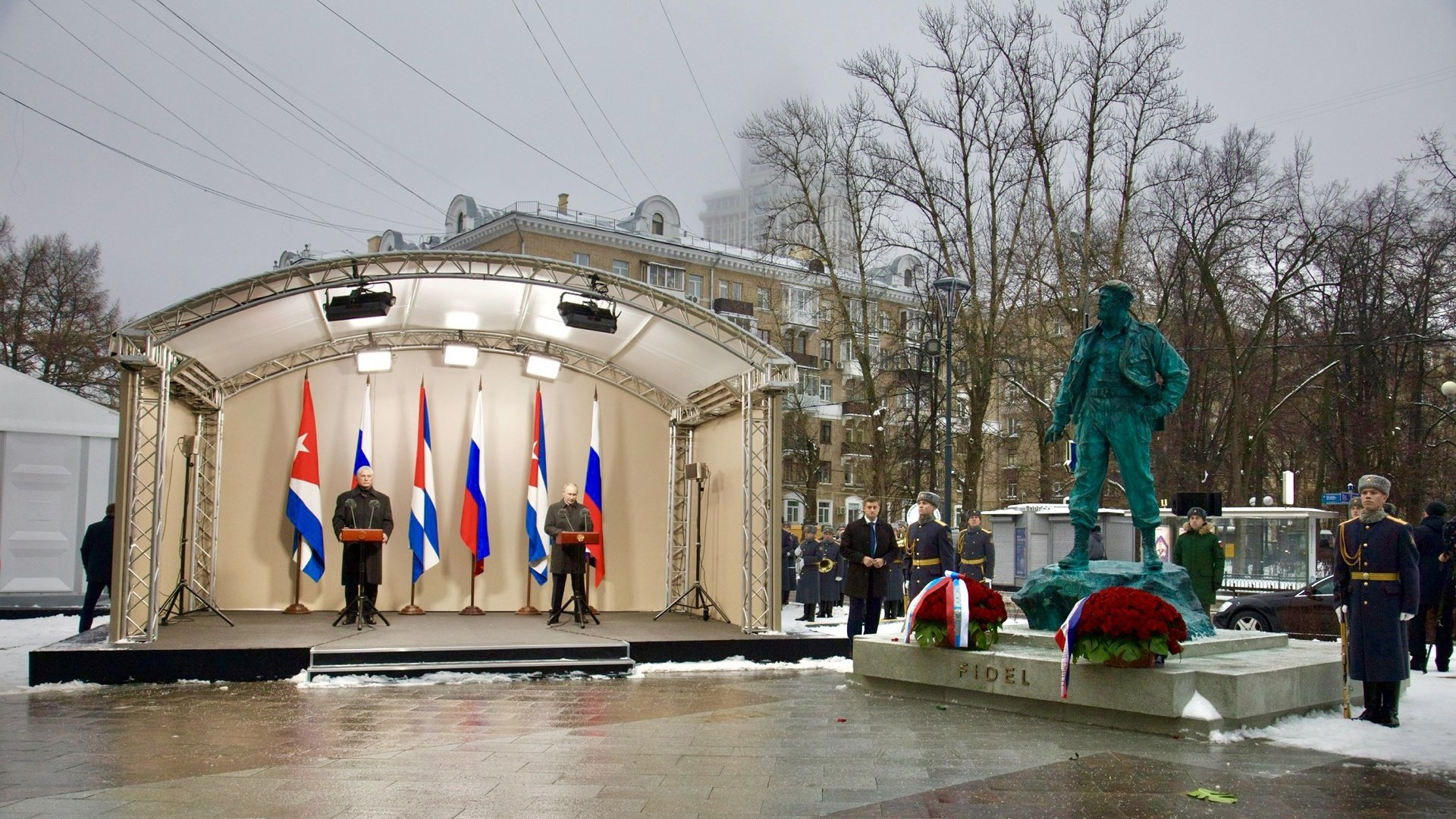 Putin recalled poignantly on Tuesday that in his last conversation with Fidel in July 2015, “He talked about the things that were surprisingly consonant with the time –- the time of the development of a multipolar world – saying that independence and dignity cannot be put up for sale and that every nation is entitled to develop as it sees fit and to choose its own path, and that a truly fair world has no place for dictatorship, plunder or neo-colonialism.”

Putin later drew the attention of Diaz-Canel to the demeanour of the statue. “I do not know if you liked it or not, but it seems to me that one can’t help but like it,” Putin said with a smile, adding that it was an appropriate tribute to Fidel’s memory and a real work of art. “It’s dynamic, on the move, looking forward. A perfect image of a true fighter.” Diaz-Canel concurred: “This is a monument in motion. I think it reflects Fidel’s personality in the midst of struggle, just like we are in the midst of struggle today.” The meaningful exchange carried a far-reaching message of its own.

Truly, the Ukraine war has been a moment of truth for Russia. From a foreign policy focused narrowly on national interests, Russia is reclaiming its regional and global role lately. Fidel would have nodded approvingly, as Cuba under him had an internationalist outlook and made immense sacrifices in challenging US hegemony.

Fidel’s legacy is of exceptional importance to Russia today. Putin described the friendship between Russia and Cuba as their “shared heritage.” He underscored, “Jointly, we will continue to strengthen our union and defend the great values of freedom, equality and justice.”

Putin added, “Based on this solid foundation of friendship, we must, of course, bearing in mind the current realities, move on, and strengthen our cooperation. I am very glad that we have such an opportunity.”

Diaz-Canel was more direct and forthright. He told Putin: “We appreciate all the work that the Russian Federation is doing to ensure that the world moves toward multipolarity and makes progress in that direction. In this sense, you have serious leadership.

“Russia and Cuba have been subjected to unfair unilateral sanctions and have a common enemy, a common source which is the Yankee empire, which manipulates a large part of humankind… And our first commitment is to continue to uphold the Russian Federation’s position in this conflict which, we believe has its origins, unfortunately, in the fact that the United States is manipulating the international community… We appreciate all efforts of the Russian Federation and your role in orienting the world towards multi-polarity, in encouraging it to move in this direction. In this sense, you have a very strong leadership role.”

How this verve in the Russian-Cuban relations pans out in the complex geopolitical setting will bear watch. The Russian-Cuban intergovernmental commission held a session in Moscow during Diaz-Canel’s visit, where, reportedly, “a number of important decisions on key issues” were taken to advance the bilateral relations. Diaz-Canel told Putin, “We have identical approaches and views on global issues. I would like to say again that Russia can always rely on Cuba.”

No matter the denouement to the Ukraine war, Russia still would face the stark reality of the US-NATO military presence right at its doorstep. There is no question of a NATO rollback to the 1998 position in Europe. The Western mercenaries in their thousands are fighting in Ukraine and prominent faces like General David Petraeus are demanding an open western military intervention in Ukraine to defeat Russia.

Indeed, the US initiative to induct Finland into NATO as a member — although that country faces no threat from Russia —  aims to “box in” Russia. And the West is aggressively stepping up its presence all around Russia. It is inconceivable that Russia can afford to remain passive.

Suffice to say, Putin is playing the “Cuban card” at an inflection point. Interestingly, Diaz-Canel’s itinerary of visit also includes China. Díaz-Canel will be the first head of state from a Latin American country that Xi Jinping receives after the 20th National Congress of the Communist Party of China.

The Chinese Foreign Ministry took note that “despite international vicissitudes, China and Cuba have forged ahead together on the path of building socialism with national characteristics, supported each other on issues concerning core interests and had close coordination on international and regional issues, setting an exemplary model for solidarity and cooperation between socialist countries and sincere mutual assistance between developing countries.”

In a commentary on Díaz-Canel’s forthcoming visit, Global Times took note that “Despite US’ long-term crackdown on left-wing governments in the region, Latin America is now experiencing “pink tide” resurgence with major countries in the region “turning left.” Latin America is tired of US’ hegemony and coercion, and leaders with agenda focusing on domestic development are gaining public support.”