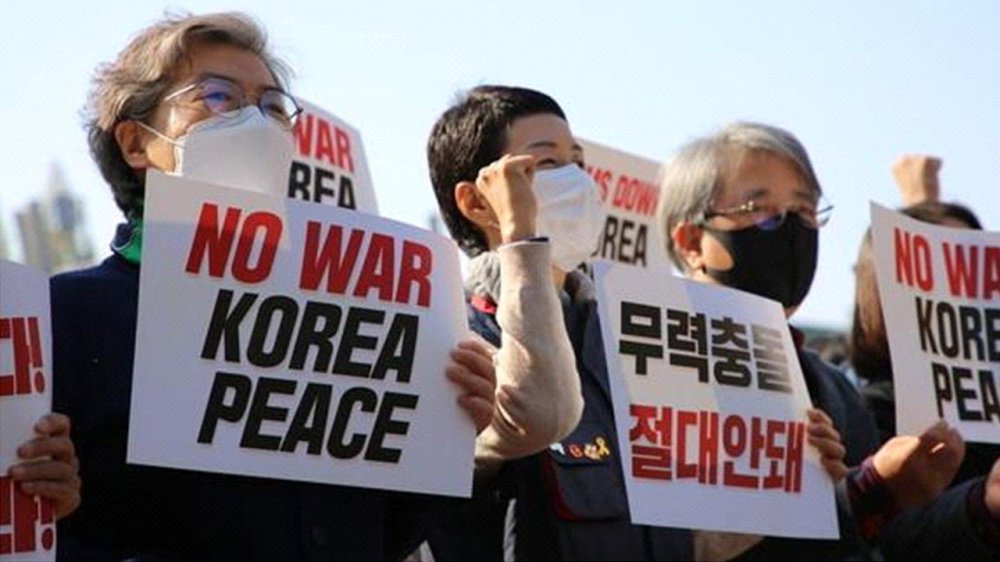 As the US increases its presentation and the militarization of the Asia-Pacific, it is increasing the number and size of multinational military exercises, which are destabilizing international relations and stirring up fears of regional wars. Canada is not only an enabler, but an eager predator looking for action.

After the US President, President Obama, introduced the Pivot to Asia foreign policy in 2008, US and allied military activities and alliances began to escalate. The US-ROK Team Spirit exercises were conducted annually from 1976 until 1994. The DPRK responded with its own military drills, missile testing, satellite launching and nuclear power development. The US-ROK exercises temporarily ended when the Republic of Korea and the Democratic People’s Republic of Korea announced their Joint Denuclearization Declaration in 1992. This declaration was followed by an agreement between the DPRK and the USA in 1994 in which the former would freeze its nuclear program, but allow the US, ROK and Japan to construct light-water nuclear reactors in the DPRK over 10 years.

There was renewed hope in the early 2000s while South Korea had a centrist government, the Truth and Reconciliation Commission and a peace and reunification process that had slowly begun. The coming to power of the US-backed Lee Myung-Bak in 2008, however, dashed those hopes. Then US Secretary of State, Hillary Clinton, took a pronounced aggressive stance against the DPRK (also known as North Korea), issuing threats regularly.

During spring 2012, the US-ROK Combined Forces Command began its annual exercises called Key Resolve and Foal Eagle. In addition, the ROK took part in Cobra Gold, a multi-national exercise in Thailand that included the U.S., Japan, Thailand, Indonesia, Malaysia, and Singapore. The DPRK was thus put under more stress. The International Crisis Group, a group much appreciated by the imperialist Western nations, reported a DPRK state official claiming that the excercises were an ”unpardonable grave military provocation to the sovereignty of the DPRK and a wanton challenge to the international community’s desire for peace and stability in the Korean Peninsula.” The Group also reported the Korean Central News Agency saying, “Key Resolve is a nuclear war rehearsal for aggression on the DPRK” and was testing test “nuclear war to invade the DPRK through a surprise attack.”

Readers must remember also that the UN Security Council imposed multiple sanctions on the DPRK in 2006 and increased them in 2017, measures that have caused drastic shortages of imported food and medical care and thereby mass suffering and unnecessary deaths in the DPRK.

Young South Korean men continued to be conscripted into 21 months of service and US required most of its armed forces personnel to serve one year in South Korea. South Korea is thoroughly militarized, to the point where a Korea arms industry can compete globally. The ROK Air Force sends fighter jets and personnel to Nellis Air Base in Nevada to participate in the Red Flag exercise in. The US has over 80 military installations including bases, training camps, watchtowers, supply depots, launch pads and the like in addition to its agreements to share ROK facilities and personnel. It keeps around 30,000 military personnel in the region.

In the meantime, despite mass resistance, the foreign policy of the government of Japan has turned aggressive. When Japan committed itself to join the US war games around Korea in 2017, it was the first time its military had ventured beyond its own borders. With mixed feelings and against a wave of mass protest in her own country, the Rightist ROK President Park Geun-hye accepted a watery apology from the late Japanese PM Shinzo Abe, which accommodated the desire to enter into military agreements in so-called defense against the DPRK. Subsequently, Abe agreed to the expansion of the US’ Iwakuni air and naval base, and the construction of two more US bases in the Okinawa Islands.

Tensions calmed down somewhat when US President Trump took a conciliatory tone with the DPRK and talked about nuclear de-escalation. The Biden presidency, on the other hand, is back to escalation and provocation. The new “Ulchi Freedom Guardian” war games of the US and ROK from August 22 to September 1, 2022, featured live fire on a “total war” premise. The latest affront is the Vigilant Storm air drills of the US, Japan and ROK from October 31 to November 4, 2022. The Diplomat reports that 240 F-35 and other warplanes were deployed for them.

The formation of the US, France and UK (AUKUS) alliance and prospects of a US, Japan, ROK and Australia alliance (QUAD), in addition to the build-up of the US military in Australia as part of the ANZUS deal (Australia, NZ and US), bring more danger. Meanwhile, NATO’s 2022 strategy claims the Indo-Pacific as its global center. This change will demand that NATO members contribute to the militarization and intensifying menacing activities against China and the DPRK.

Despite US President Trump’s softer words with DPRK, Canadian and US hawks were circling above, ready to pounce on the peace negotiations that the ROK had initiated with the DPRK without the US. Clearly, the Canadian government wanted to disrupt the peace process. The US and Canada organized the Vancouver Foreign Ministers’ Meeting on Security and Stability on the Korean Peninsula in early 2018. This was one of Chrystia Freeland’s most outrageous moments.

Though invited by her, then Canada’s Foreign Affairs Minister Chrystia Freeland shut the door on peace groups such as Korean Women Cross the DMZ and rallied the ministers to increase their hostility against the DPRK. The hostile rhetoric hurled at the DPRK was racheted up further than before. Her reason? — the “global challenge” posed by “the grave and growing threat posed by North Korea’s nuclear weapons and ballistic missile programs.” While stating she wanted to find a diplomatic solution, she insisted that the DPRK would have to abandon its ideology and own way forward before there could be a peace settlement, implying the goal of regime change. Then she announced enforcement of sanctions against NK’s “sanctions evasion” in partnership with the US, pledging $3.25 million for that purpose. [Her interventions seemed to be a spiteful response to South Korea’s independent initiative to hold talks with the DPRK in this period.

Ideology is no doubt a motivator. Just as NATO clearly states it is defending the economy, though, Canada’s interest is primarily economic. Global Affairs released an article about the Comprehensive and Progressive Agreement on Trans-Pacific Partnership (CPTPP), which Canada made with 11 countries in East Asia and South America on January 23, 2018. This press release writes, “In 2016, Canada’s bilateral trade with these seven partners totalled $71.3 billion.” Already enjoying one with South Korea, Canada was making Free Trade Agreements with all those states.

Later, the Canadian Department of National Defense has launched Operation Neon to enforce sanctions using frigates and surveillance aircraft [Hill Notes, July 27, 2021]. Military machinery is being used in peace time against civilian targets such as freighters and merchant vessels to keep civilians from receiving daily necessities.

Consistent with the DND’s current policy of seeking “engagement”, Canada has participated in Exercise Talisman Sabre off the coast of Northeast Australia with Australia, New Zealand, ROK, US and the UK in July of 2021. It also joined in the massive annual war games in the Pacific Rim known as RIMPAC, which launched from the Jeju base in South Korea and involved 22 countries in 2021, and was even bigger in 2022. Moreover, RCAF 407 Squadron joined in Exercise Sea Dragon in Guam in early 2021, winning a prize for tactical efficiency.

Meanwhile, in November 2021, the Canadian government backed HanVoice, a CIA-front (National Endowment for Democracy) funded group based in Canada, by supporting its project to allow Canadians to privately sponsor refugees from the DPRK. HanVoice has worked to demonize the DPRK since its founding in 2007, with the then-Conservative government having Secretary of State (Multiculturalism and Canadian Identity) Jason Kenney, speak at HanVoice’s opening event. HanVoice has received assistance from both the Trudeau and Harper governments.

While eyes are being diverted to the tensions over Taiwan province, readers should acknowledge that the Korean Peninsula is still a hot spot. The Korean war is not officially over; neither is the Korean revolution. Russia and China remain supportive of the DPRK, however tentatively, so a serious escalation has the potential to involve them. The DPRK’s possession of nuclear weaponry is certainly a key safeguard against a wholesale invasion by the US and friends including Canada, with Iraq and Libya showcasing the fate that countries which lack nuclear weapons, and oppose US geopolitical interests, have faced. At the same time, the danger of nuclear war on the Peninsula is real.

What is urgently needed for security in the Korean Peninsula is a signed Peace Treaty, and that should be Canada’s foreign policy focus. Canada should urge the US to withdraw all troops from South Korea and Japan (along with occupied Okinawa), and stand out of the ROK and DPRK’s way, to let them hash out a peace treaty. Canada needs to give up its bellicose rhetoric towards the DPRK (and China) and adopt a peaceful foreign policy and stand back from the US position. Peace is possible between the ROK and DPRK, but not until the West ends the militarization of Korea and genuinely supports peace in the region.