Christelle Néant
On 17 November 2022, the Hague Tribunal delivered its verdict in the MH17 crash case, convicting three of the four defendants. And if the trial quickly turned out to be a parody of justice, the verdict itself is delirious, so much so that its text contradicts itself from one sentence to the next and shows that the conviction of the defendants has more to do with the political will to have a judicial spectacle than with the evidence in the case.

Two and a half years after its launch, the MH17 trial of shame has finally ended with a verdict, the outcome of which few doubted, as it was clear that the culprits had been designated in advance. And for those who doubt that this trial was a travesty of justice, I refer them to my numerous articles on the MH17 case, which demonstrate that the “evidence” provided by the court would make any serious judge laugh.

Blatantly doctored pixel salad as photo and video evidence, audio recordings provided by one of the potential defendants (Ukraine) that have not been seriously verified and have also been blatantly falsified (see the documentary below “MH17 – Call for justice”), anonymous witnesses, a report supposedly based on US satellite imagery that the US refuses to provide, openly russophobic magistrates, one of whom is involved in a judicial scandal in Argentina, the systematic refusal to analyse and take seriously the elements provided by Russia, such as the fact that the serial number of the Buk exposed by the investigation team indicates that the missile belonged to the Ukrainian army, or the life-size test of Almaz-Antey which shows that the hypothesis of the judges did not hold water.

Furthermore, having spoken to one of the former commanders of the People’s Militia stationed in Snezhnoye in 2014, the location of the BUK that allegedly fired the missile that shot down MH17 was far too close to the Ukrainian-controlled area. According to the JIT and Dutch judges, the BUK was fired from a field near Pervomaysky (red dot on the map below). According to the commander, the last block-post under the control of the DPR People’s Militia on that day was located at the crossroads near Pervomaysky (dark blue dot). 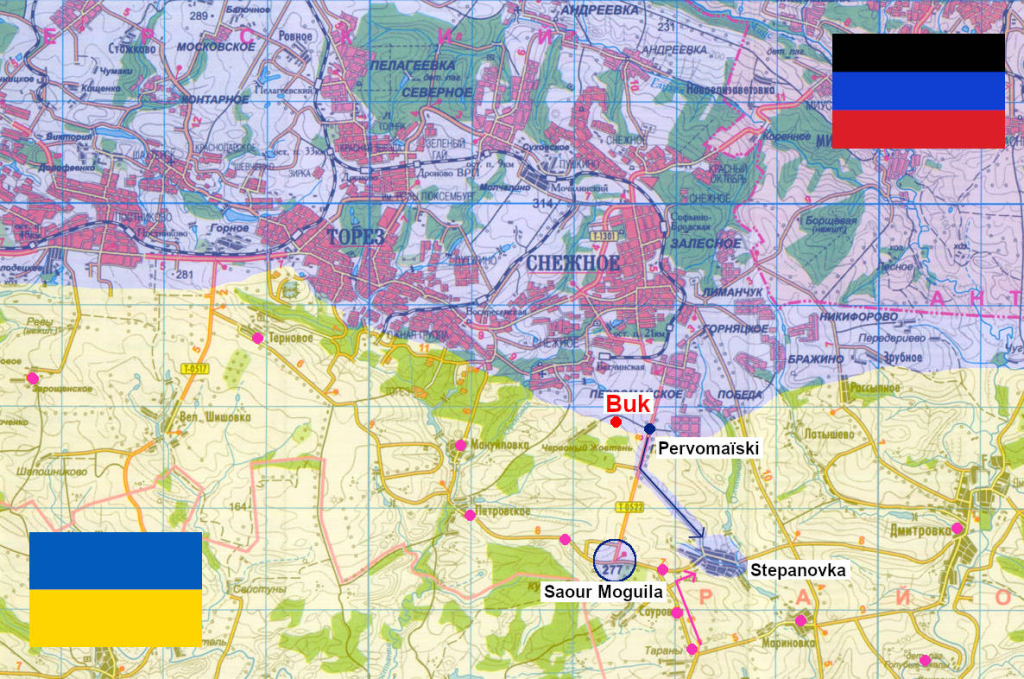 Beyond this was the zone under the control of the Ukrainian army (yellow zone with the localities and important points controlled in pink), which was encircling and shelling the height of Saur Mogila! The popular militia had succeeded the day before the crash in breaking through to Stepanovka, which it had taken control of. But the Ukrainian army was still present on the outskirts of Stepanovka and especially around Saur Mogila. This point was confirmed by Valentina, a resident of the village near the field from which the Buk was allegedly fired.

But there is less than 6 km between Saur Mogila and the place from which the Buk was allegedly fired. Six kilometres on flat ground! This means that if a Buk missile had been fired from that location when the Ukrainian army was only 6 kilometres away, the Ukrainian soldiers would have seen and heard the shot and the Buk system would have been destroyed! As the interviewed commander pointed out to me, if the people’s militia had had a Buk system, they would never have installed it there, within range of the Ukrainian artillery, in the open, in the middle of nowhere, with just a few soldiers at the next block-post to protect the device! They would have installed it in Snezhnoye, to protect the town! And as Valentina pointed out, no missiles were fired that day from the direction of the field indicated by the investigation team. The only one that was fired came from the direction of Stepanovka, which was far too far away to hit MH17, and its trajectory was not consistent with where the plane was shot down. Moreover, as Valentina pointed out, the Ukrainian fighters were hiding under civilian aircraft to avoid being shot down by the DPR’s anti-aircraft defence.

In the face of all these facts and testimonies, there are already many questions to be asked about the way the official investigation was conducted. But where it gets crazy is when you look at the verdict of the MH17 trial.

The delirium begins in the “Conflict” part of the verdict. I translate the whole text here.

“Abundant indications reveal that from mid May 2014, the DPR in fact took directions from the Russian Federation. As a result, the involvement of the Russian Federation in the conflict with Ukraine led the conflict to become an international one. In an international conflict, deployment of weapons may be allowed under certain circumstances. Soldiers from those countries may then invoke immunity (combatant immunity) and shall not be subject to criminal prosecution. However, as the Russian Federation and the accused deny such Russian involvement to this day, the DPR fighters cannot be considered to be part of the Russian armed forces. Therefore, they may not be granted immunity from prosecution.”

This is already a bad start. If the judges consider that it is true that Russia was involved in the conflict in Ukraine in 2014, and that it was therefore an international conflict, then it does not matter what the defendants say. Judges must judge according to the facts and not according to what people say. If a defendant is factually an adult and claims to be a minor, are you going to judge him as a minor because he refuses to admit that he is an adult? If a defendant claims to be a moth in a pullover, are you going to exempt him from trial because he claims not to belong to the human species? By dint of wanting to put Russophobia everywhere in the verdict, by wanting at all costs to involve Russia in this story, the magistrates of the MH17 trial have come to contradict themselves in a single paragraph. And more than once!

We then move on to the part about intention and premeditation, and here it becomes pure bad faith and debilitation.

“The question as to why the crew of the Buk TELAR aimed the Buk missile at Flight MH17 remains unanswered. This does not change the fact that the Buk missile was intentionally fired and aimed at an aircraft. […] The crew appears to have thought the missile was being fired not at a civilian but at a military aircraft. Even in that case, there is intent and premeditation to shoot down that aircraft and take the lives of those on board.”

If we start from the hypothesis of the Dutch magistrates, the Buk crew would have thought of shooting at a military plane, and according to them, even that would be reprehensible because the intention would be to kill the people on board. Except that in an armed conflict, an enemy plane is full of soldiers and not civilians, and it is not there to drop strawberries and sweets, but to shoot at you and drop bombs to kill you! But every human being has a fundamental right to life! If someone tries to kill you or the people you are protecting, you have the right to kill him, that’s the basis of self-defence. Now I remind you that two days before the crash of MH17, the Ukrainian air force deliberately bombed the centre of Snezhnoye, killing 12 civilians! So the people’s militia had the right to shoot at these military planes to protect the population.

I will skip the part where the magistrates explain how crucial it was to ensure the arrival of the Buk and to escort it or have it protected, and that those who fulfilled this role are therefore co-responsible. This part of the verdict is only there to justify condemning so heavily lampistes while the investigators were not able to identify who was the crew present inside the Buk system that allegedly shot down MH17! Eight years of ultra-mediatised and Russophobic investigation for not even being able to identify those who allegedly pressed the button… As a result, the judges have been reduced to condemning people who allegedly helped to bring the Buk to the Donetsk People’s Republic (DPR).

And while we’re on the subject of conviction, this is where we reach the peak of the ridiculous. First with the case of Igor Guirkine, alias Strelkov, who is considered to be responsible for what happened even though “it has not been proven that Girkin had advance knowledge of the availability of the Buk TELAR that caused Flight MH17 to crash”, but as he was the highest ranking military officer, “he had the opportunity to decide whether to deploy a Buk TELAR“. Excuse me??? You are sentencing a man to life imprisonment when you could not even prove that he had knowledge of the fact that the accused Buk system was allegedly present in the DPR? He is just sentenced because he could potentially decide to deploy such a system? What kind of nonsense is this?

And wait, that’s not the worst of it, I’ve saved the icing on the cake for last. The justification for a life sentence.

“The Court qualifies the attitude and dispositions of Kharchenko, Dubinskiy and Girkin, who have merely responded to the accusations from afar, as disrespectful and unnecessarily hurtful to the relatives. Causing the crash of Flight MH17 and the murders of all persons on board is such a serious accusation, the consequences are so devastating, and the attitude of the accused is so reprehensible, that a limited period of imprisonment will not suffice. All three accused are sentenced to life imprisonment.”

So in fact, the three defendants were sentenced to life imprisonment because they refused to take part in your parody MH17 trial, and did not throw money at lawyers, who for two and a half years would have had to attend this bad imitation of justice, where the evidence is anonymous witnesses, doctored audio tapes, photos and videos, and satellite images never seen by any of the magistrates of the court, and with a verdict already known in advance!

Moreover, the only one to be acquitted, Pulatov, is also the only one who hired Dutch lawyers to defend himself. But paying lawyers for two and a half years is expensive. Especially Dutch lawyers who specialise in this kind of trial. You can’t sentence someone in absentia to life imprisonment with such shaky evidence, and very indirect potential involvement (they didn’t push the button), just because the person potentially couldn’t afford to send lawyers to regular sessions for two years and a half! And that given the pre-determined nature of the verdict, it was of course out of the question for them to come to this mock trial in person.

I recall that in 2001, Ukraine accidentally shot down a Russian plane over the Black Sea during military exercises, and that Kiev denied responsibility until the end (Ukraine refused to compensate the airline, and refuses any legal recognition of its guilt) despite evidence that the plane had been shot down by a Ukrainian air defence missile. Officers have been sacked, but no one has been criminally convicted for the crash that killed 78 people.

Ukraine’s potential culpability in the MH17 crash was dismissed far too quickly by the investigators in view of the disastrous accident history of Ukrainian air defence, and the non-anonymous testimonies on the ground which tell a very different story to that set out in the 17 November verdict. Moreover, before convicting the lampistes for allegedly accompanying a Buk system, the judges should have instead looked at Ukraine’s overwhelming responsibility for the fact that the skies over the conflict zone were still open to civilian aircraft while several Ukrainian planes and helicopters had been shot down in the days and weeks before the MH17 crash! This shameful verdict of the MH17 trial will remain an indelible stain on the Dutch justice system, which preferred to offer scapegoats to the families of the victims rather than punish the real culprits.