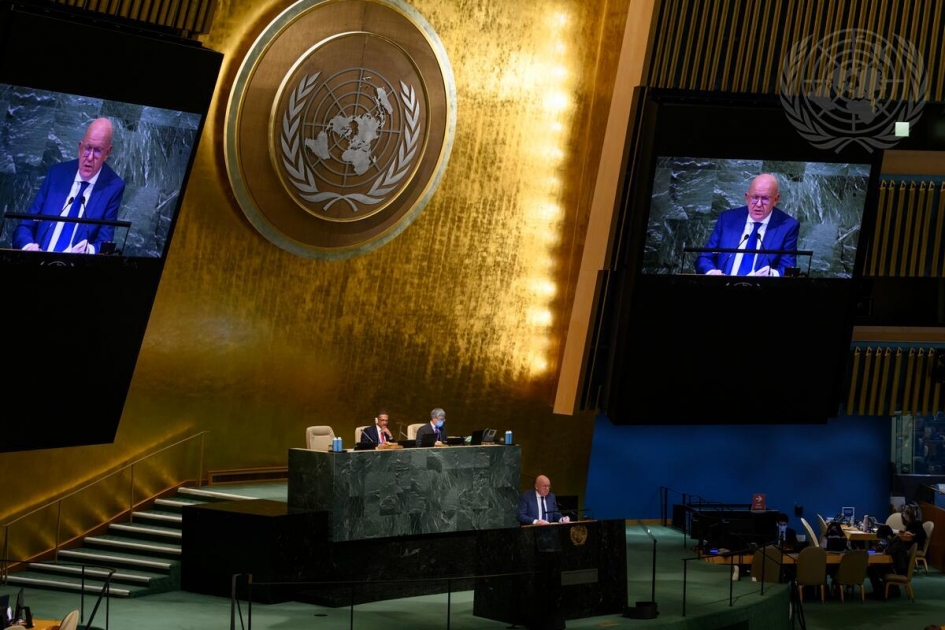 When speaking from this podium earlier today, the Permanent Representative of Ukraine cited many quotes, yet he failed to say the most important thing about this draft resolution. Now let us bridge this gap.

The draft resolution that has been put forward to the 11th emergency special session of the General Assembly is a classical representation of the “rules-based order”, whereby a small group of states defies the international law and seeks to “consecrate” lawlessness while using the authority of the GA and presenting the Assembly as a judicial body, which, by definition, it is not.

It is obvious that the initiative is flawed. From the legal perspective, the provisions of the draft cannot stand up to any criticism. They are legally void – nothing more than an attempt to legalize what cannot be legalized in terms of effective international law. The co-sponsors must realize that adoption of such a resolution would trigger consequences that may boomerang against themselves.

These states brag about their commitment to legality, while at the same time spurning even an appearance of this legality.

The draft resolution envisages establishing some sort of an “international mechanism for reparation for damage”. What comes next is a mere technicality – the mechanism is to be created by a certain group of states, who will decide how it should work. It means that the General Assembly is offered to give a carte blanche for establishing a body, of which functionality most of those present in this hall will not have even the remotest idea. These countries will, at their own discretion, determine, or rather appoint the perpetrators and establish the amount of damage, methods of its compensation, etc. The UN will not play any role in this process, because this mechanism is supposed to be created outside the UN framework, and no one is going to report to the General Assembly on its activities. We emphasize that the vast majority of member states will have absolutely no voice or power of control in the establishment of the mechanism or during its operation.

We do not have any doubts as to where this “reparation for damage” will be coming from. The West is doing its best to add at least some semblance of legitimacy to its actions which aim at spending hundreds of billions of dollars of sovereign assets that have been frozen, and in fact, stolen from the Russian Federation. They have long wanted to “unfreeze” the assets, but not in order to return the funds to their rightful owner or spend them on helping Ukraine, but rather to finance the ever-growing arms supplies to Kiev and pay off its debts for the already transferred weapons.

Thus, the West wants to prolong and further aggravate the conflict, planning to use Russian money for this. A corresponding decision by the UNGA is only needed to cover up for this barefaced robbery. But this will only increase tension and instability in the world – to the benefit of Western military corporations that have already made billions of dollars on arms deliveries to Ukraine.

We underscore that neither the General Assembly nor any “mechanism” can “cancel” the sovereign immunity of state assets, which is granted by international law. Those states who will support this decision by the GA will become complicit in the illegal expropriation of a third country’s sovereign assets and another act of abuse of UNGA powers in the interests of the West.

Do the developing states want to have anything in common with this initiative at all? We think for the majority of them it is not only preposterous but actually insulting that Western countries have come to demand rather than pay off reparations.

This plot with first stealing and then spending sovereign state assets has been conceived by exactly the same states that have a hefty track record of robbing the rest of the world. I mean the centuries of slavery and oppression, colonialism, and neocolonial domination, military aggression and interventions, blockades, unilateral sanctions, and shameless exploitation of natural resources of the occupied and subjugated countries. The authors of the initiative try to make everyone forget it, while propagating only the Ukrainian story.

Western states never considered “reparations” as a means to atone for their own sins. What’s more, they have blocked relevant discussions of this issue in the Sixth Committee for two decades, and also impeded elaboration of a multilateral tool for responsibility of states for internationally wrongful acts. They only have recalled this concept now, after they set sights on “reparations” as a handy tool to rob yet another state.

If this resolution comes to be adopted, it will entail systemic consequences for the UN activities. We call on member states to become cognizant of this and cast their vote against the draft resolution in front of us.

PERMANENT MISSION OF THE RUSSIAN FEDERATION TO THE UNITED NATIONS

❗️ We underscore that neither the General Assembly nor any “mechanism” can “cancel” the sovereign immunity of state assets, which is granted by international law.