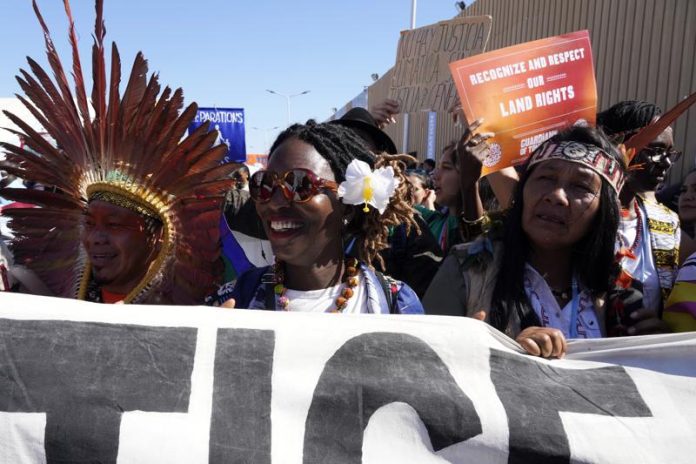 After one week of speeches, discussions, demonstrations and debate, the 27th United Nations Climate Conference (COP27) has once again stalled over the questions of which global interests are actually responsible for environmental degradation.

More importantly in contemporary times, the issue of imperialist countries and their multinational corporations being obligated to pay for the negative impact of greenhouse gas emissions within the former colonial and neo-colonial territories has been raised to the top of the agenda of international gatherings.

Today the United States, Britain and the European Union (EU) are facing widespread economic and security difficulties characterized mainly by attempts to control an inflationary spiral not experienced in over four decades and the impact of a proxy war being fought between Washington and NATO on the one hand and the Russian Federation and its allies on the other. The threat of thermonuclear war has been raised by the administration of President Joe Biden while the defense industry and the Pentagon facilitate the flow of arms into Ukraine and other contiguous states.

The heavy presence of the U.S. at the COP27 Summit in Sharm-el-Sheikh Egypt has served as an impediment to holding open and democratic discussions. As in the previous conference held in 2021 in Glasgow, Scotland, Washington and its surrogates have consistently vetoed language within resolutions that address the international division of economic power and labor, which is key in addressing the desperate impact of severe weather events, desertification and food deficits. Since the beginning of the Russian special military operation in Ukraine, the shipment of grain, wheat and other agricultural products and inputs have been severely constrained.

Moreover, Egypt is a country whose government has been beholden to aid from the U.S. for decades since the signing of the Camp David Accords normalizing relations between Cairo and Tel Aviv. The Accords were signed in 1978 and since this time period billions of dollars have been sent to Egypt for its military forces and the maintenance of the state. Consequently, it should not be surprising that the U.S. would have a disproportionate presence at the conference in Sharm-el-Sheikh.

The fact that this summit is being held on the African continent, many would think that this provides an opportunity for the continent’s governmental and non-governmental leaders to take center stage. Nonetheless, the presence of the U.S. president and other leading cabinet and legislative figures illustrates the limitations of such conferences.

A report on the COP27 proceedings published by the Associated Press noted: “The subject of climate compensation was once considered taboo, due to concerns from rich countries that they might be on the hook for vast sums. But intense pressure from developing countries forced the issue of ‘loss and damage’ onto the formal agenda at the talks for the first time this year. Whether there will be a deal to promote further technical work or the creation of an actual fund remains to be seen.” (https://apnews.com/article/science-business-climate-and-environment-53185633d4db09a375626c513251ed31)

However, as within the counter arguments surrounding the payments of reparations for African enslavement and colonization by Europe and North America, the guilty interests will not accept responsibility for the harm done in the past or the present. This same political position by the imperialist states was reflected in the statement made by U.S. environmental envoy John Kerry.

According to the Associated Press in the same above-mentioned article: “John Kerry said the United States is hopeful of getting an agreement ‘before 2024’ but suggested this might not come to pass in Egypt. But he made it clear where the U.S. red line lies for Washington: ‘The United States and many other countries will not establish some … legal structure that is tied to compensation or liability.’ That doesn’t mean money won’t flow, eventually. But it might be branded as aid, tied into existing funds and require contributions from all major emitters if it’s to pass.”

In other words, Washington and Wall Street plans to maintain the status quo where “aid and loans” to states within Africa, Asia, Latin America and the Caribbean will serve as the mechanism by which the U.S. and other imperialist states will utilize to avoid their responsibility for climate change. Under such a policy the existing global configuration of geopolitical dominance will remain.

However, this viewpoint does not take into consideration the intervention of the working class, the oppressed, farmers and impoverished communities in shaping political trends and governmental policy in various regions of the world. In Latin America for example, Indigenous nations, workers and farmers have initiated uprisings in response to the neo-liberal imposed policies which restricted water and land usage as well as the rapid rise of inflation.

In Africa there is a great level of awareness drawing the link between imperialism and militarism. This rising consciousness has resulted in demonstrations against France’s Operation Barkhane and the demand that the U.S. Africa Command (AFRICOM) withdraw their forces from the continent.

As the AP points out in its analysis of the COP27 debate over damage and loss: “Rich countries have fallen short on a pledge to mobilize $100 billion a year by 2020 in climate financing for poor nations. This has opened up a rift of distrust that negotiators are hoping to close with fresh pledges. But needs are growing, and a new, higher target needs to be set from 2025 onward.”

These imperatives on the part of African and other developing regions cannot be postponed in perpetuity. The emergence of alternative models of international relations are a clear result of the failure of the Bretton Woods monetary system which emerged during the concluding months of the Second World War. These institutions such as the International Monetary Fund (IMF) and the International Bank for Reconstruction and Development (World Bank), have long been exposed for their role aimed at exploiting the majority of the world’s population remaining under the yoke of imperialism.

Despite the role of the U.S. and its allies in the United Kingdom and the EU, there were protests which took place during the first week of the COP27 Summit. In designated zones at Sharm-el-Sheikh, a resort area where there is a strong reliance on tourism and political conferences, people called for the radical departure from the existing production methods and military policies which have resulted in the increase in greenhouse gas emissions, warming the planet to dangerous and unsustainable levels.

Inside the conference, the Prime Minister of Barbados, Mia Mottley, decried the lack of action by the United Nations in addressing the problems emanating from climate change. Barbados recently in an act of sovereignty withdrew from the British crown and declared itself a republic demanding the payment of reparations for centuries of enslavement and colonialism.

Prime Minister Mottley emphasized in her speech that: “We were the ones whose blood, sweat and tears financed the industrial revolution. Are we now to face double jeopardy by having to pay the cost as a result of those greenhouse gases from the industrial revolution? That is fundamentally unfair. We need to have a different approach, to allow grant-funded reconstruction grants going forward, in those countries that suffer from disaster. Unless that happens, we are going to see an increase in climate refugees. We know that by 2050, the world’s 21 million climate refugees today will become 1 billion.” (https://womensagenda.com.au/latest/barbados-pm-mia-mottley-tells-cop27-there-will-be-1-billion-climate-refugees-by-2050/)

Outside of the conference, people marched in condemnation of the failure of the imperialist states to pay damage and loss to the developing countries suffering the most from climate change in the 21st century. One article on these protests quoted the voices of the people saying: “’Pay for loss and damage now,’ said Friday Nbani, a Nigerian environmental activist who was leading a group of African protesters. Many protesters, alongside several vulnerable countries, have called for ‘loss and damage’ payments, or financing to help pay for climate-related harms, to be central to negotiations. ‘Africa is crying, and its people are dying,’ Nbani said.” (https://apnews.com/article/travel-business-accommodations-climate-and-environment-dba5d7604f438b7ddf024c6252adc788)

These contradictions will be eventually resolved through a protracted class struggle which extends across the planet. The outcome of this struggle against climate change will be determined by the international balance forces and the determination of the majority to build a world based upon the interests of the people and the earth.

Abayomi Azikiwe is the editor of Pan-African News Wire , an international electronic press service designed to foster intelligent discussion on the affairs of African people throughout the continent and the world. The press agency was founded in January of 1998 and has published thousands of articles and dispatches in newspapers, magazines, journals, research reports, blogs and websites throughout the world. The PANW represents the only daily international news source on pan-african and global affairs.

COP27 and the Imperatives for a Renewed African Security Framework