Three days before the last of Ukraine’s defenders in Mariupol surrendered in May, one of them tweeted, “NAZI!!!!” Dmytro “Orest” Kozatsky, a 26-year old fighter from the notorious Azov Regiment holed up in the Azovstal steel plant, where he became the head of its press service, tweeted this in response to a Dutch blogger pointing out that Kozatsky deleted posts from 2018–20 showing off a swastika-inspired pizza that he made, a coded neo-Nazi t-shirt in his wardrobe, and an ankle tattoo of a double-armed swastika worn by some German concentration camp guards.

Kozatsky’s pictures from inside Azovstal have made him one of the most famous members of the far-right Azov movement. Before surrendering, facing the unknown in Russian captivity, Kozatsky uploaded his photos to the internet, and made a short film, “Last day at Azovstal.” The Guardian, among other outlets, published his work, while meekly conceding that the Azov Regiment “retains some far-right affiliations.” While in Russia, Kozatsky won several photography awards for his Azovstal series, “The Light Will Win.” He was released and returned to Ukraine in September. Currently, Kozatsky is visiting the United States, while more of his online neo-Nazi activity comes to light.

On Twitter, the Azov press spokesperson has “liked” many horrendous posts, including an image of a symbol associated with the Nazi SS which largely administered the Holocaust. The Totenkopf was captioned: “Your face when you read news about gypsies.” That year, in 2018, the U.S. Helsinki Commission warned, “attacks on Roma in Ukraine have escalated dramatically.” Earlier that spring, Kozatsky liked an image of the KKK and another tweet that said “Heil Hitler!” on the Nazi dictator’s birthday. In January 2019, Kozatsky liked an image of Amon Göth, an Austrian Nazi who commanded the Plaszow concentration camp and was portrayed in Schindler’s List as the main antagonist of the film. In March 2020, not long after the first confirmed case of Covid-19 in his country, Kozatsky liked an image of Ukrainian graffiti that said “Death to Yids” with an SS symbol. Two days before he surrendered in Mariupol, someone on Twitter mocked Kozatsky for his ankle tattoos: “I’m not a nazi.” He responded, “I want to disappoint you and tell you that the swastika is not only Nazi. Here is your homework, young investigator…” There are plenty of more examples of him being a Nazi on the internet.

As seen above, Dmytro Kozatsky obviously gets a big kick out of the neo-Nazi code 1488, and he appears to be fond of the white supremacist Ukrainian brands SvaStone and “White Print.” According to Reporting Radicalism, a website created by the US-funded Freedom House in Ukraine, “The brand name SvaStone alludes to the swastika. Its logo is a stylized swastika… The logo and name are exclusively used as a brand that targets far-right consumers.” White Print is more obscure and overtly neo-Nazi. This Azov-associated brand, which apparently operates exclusively on the Russian social media network VK, made Kozatsky’s 1488 tshirt, and perhaps another featuring a sun cross swastika. Kozatsky expressed interest in another one of their shirts glorifying the “Galicia Division” — the Ukrainian Waffen-SS unit — in addition to the shirt he already has emblazoned with the Nazi formation’s Ukrainian emblem.

This past week, Blue Star Press published Relentless Courage, a hardcover book including a collection of images of the war in Ukraine “from some of the most respected photojournalists of our time.” This included over twenty five “world-renowned” photojournalists, and Dmytro Kozatsky, whose iconic self-portrait (standing in a beam of light in Azovstal) made the front cover. The book also includes essays from the Ukrainian Ambassador to the US, a Pulitzer Prize winning photographer, and a famous Ukrainian novelist. To promote Relentless Courage before its release, the Ambassador appeared on MSNBC last week alongside Kozatsky and Carol Guzy, a four time Pulitzer Prize-winner whose work is also featured in the book. MSNBC host Andrea Mitchell conducted a softball interview, especially with Kozatsky, and described the book as “remarkable” at least three times.

“I’m not a hero, I’m just taking pictures of heroes,” Kozatsky told an audience of Ukrainian American children last weekend at Westland Middle School in Bethesda, Maryland. The Taras Shevchenko School of Ukrainian Studies of Greater Washington holds classes at Westland Middle School every Saturday. Oleh Vretsona, who is the director and/or history teacher of the Saturday school, recently made a donation to Azov’s charity wing. The history curriculum apparently glorifies Ukrainian Nazi collaborators and starts with teaching students that Ukraine is one of the oldest civilizations on earth, a myth that lends itself to the notion of Ukrainian Aryans.

Irena Chalupa, who teaches literature to middle and upper grade students, photographed the event, and likely played a role in arranging it. According to her LinkedIn account, Chalupa is a senior correspondent for the US-funded Radio Free Europe-Radio Liberty (RFE-RL). Before she joined RFE-RL, in the 1980s, Chalupa worked in the Munich headquarters building of the Anti-Bolshevik Bloc of Nations (ABN), “the largest and most important umbrella for former Nazi collaborators in the world.” Also in Munich, she read poetry at the 1986 funeral of ABN leader Yaroslav Stetsko, who led the clandestine OUN-B, or “Banderite” faction of the far-right Organization of Ukrainian Nationalists. Stetsko, among other things, proclaimed the Banderites’ explicitly pro-Nazi “restoration of Ukrainian statehood” on June 30, 1941 in German-occupied western Ukraine. Roman Zvarych, once a leading member of the ABN and OUN-B in the United States, and allegedly a secretary to Stetsko, used to be the chief manager of the Azov Civic Corps. Reportedly, Zvarych “was supposed to be the interlocutor between the Ukrainian far-right and their foreign sponsors.”

Chalupa apparently met her husband, Askold Krushelnycky, in the ABN. Krushelnycky, who comes from a notable British Banderite family, has embedded with the Mujahideen in Afghanistan (1980s), and the Azov Battalion in Mariupol (2014). Writing for the Atlantic Council, Krushelnycky made no mention of Azov’s politics. Chalupa has formerly served as the director of the Ukrainian language service of Radio Liberty, and an editor of the Atlantic Council’s UkraineAlert blog. For years she has been a producer of the notorious “counter-disinformation” outlet Stop Fake, which has been criticized for whitewashing (and being linked with) neo-Nazis in Ukraine. Chalupa and Krushelnycky have both guest hosted its English language videos. Perhaps they can explain to Westland Middle School why they shouldn’t care about welcoming a famous Ukrainian neo-Nazi on to the property, although the school made the news in 2016 for swastikas drawn in one of the boys’ bathrooms.

On Friday morning, Dmytro Kozatsky will be joining the self-described “first motorcade rally in the USA to support Ukraine,” starting at the National Mall in Washington D.C., and stopping in Baltimore and Philadelphia on the way to Brighton Beach in Brooklyn. The caravan is supposed to be led by a car with the customized license plate, “HIMARS,” for Lockheed Martin’s “High Mobility Artillery Rocket System.” It is said that there will be an “afterparty.”

On Sunday, Kozatsky is scheduled to participate in a Q&A session at the School of Visual Arts (SVA) Theatre in Manhattan that evening. The venue markets itself as “the cultural center of New York’s artistically-vibrant Chelsea neighborhood.” The Q&A will follow a screening of Freedom on Fire as part of Doc NYC, “America’s Largest Documentary Festival.” Also participating will be Evgeny Afineevsky, the Israel-American director of the film, who has admitted that he deliberately downplayed the Ukrainian far-right in his Oscar-nominated prequel Winter on Fire. For his latest movie, he reportedly enlisted Azov press spokesperson Dmytro Kozatsky as the “protagonist & film cinematographer.” Afineevsky is apparently concerned about the rise of neo-Nazis in the United States, just not Ukraine. But if Kozatsky isn’t a Nazi, then who is?! 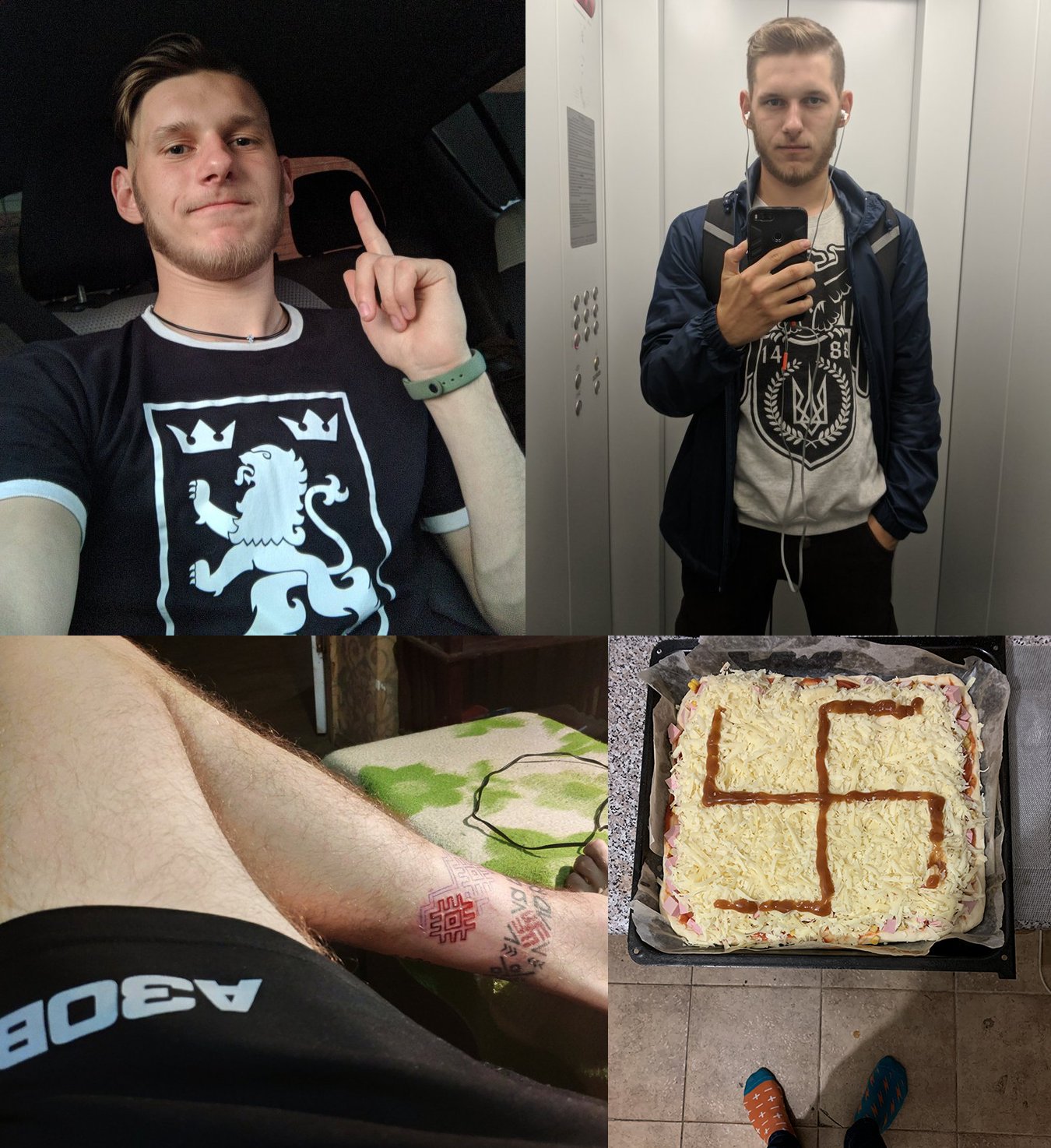 Mayhem at @SVA_News Theatre tonight after their "special guest" Dmytro Kozatsky gets called out for being a neo-Nazi by at least two people. Anticipating trouble, @DocNYCfest scrubbed Kozatsky's name from its website and apparently prepared to shut down any dissent during the Q&A pic.twitter.com/iqolebfj3f