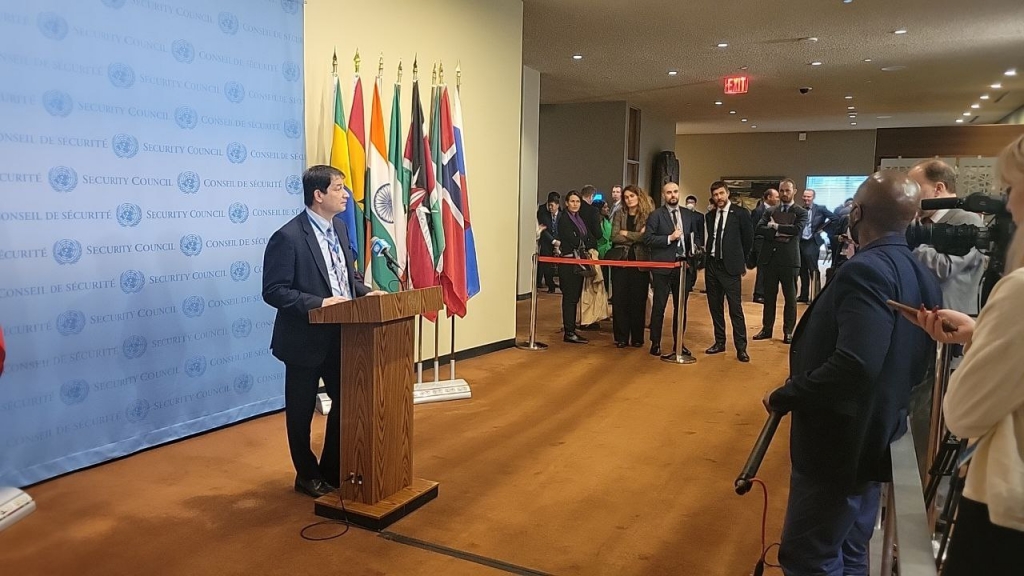 Dmitry Polyanskiy: We have just asked for an AOB on the possibility of creation of a dirty bomb in Ukraine by Ukrainian authorities. We think it is a very serious threat. Ukraine has the capacity and all the reasons to do so, because we know that firstly, Zelensky’s regime wants to avoid defeat and secondly, it wants to involve NATO in a direct clash with Russia, which is very dangerous but profitable for Zelensky’s regime to remain in power.

We indicated that a dirty bomb is not a sophisticated device. It is a shell with some radioactive waste, and it is very difficult to detect activities that create such dirty bombs. But we have information that we shared both in the letter that we sent yesterday and also in telephone conversations of our Minister of Defense and his counterparts from several countries.

There are at least two facilities that have appropriate scientific knowledge for creating dirty bombs. They are also indicated in our letter, which I think everyone has seen, so I will not dwell on more details. I think I will limit myself to it and answer your questions.

Q: The letter details how Russia thinks Ukraine could make such a bomb. It believes that President Zelensky has ordered two organizations to do this. What is the evidence that some sort of orders have been given by Ukraine to do this.

A: It is intelligence information.

A: Does anybody normally share intelligence in such situations?

We know it and we shared it in our telephone conversations with counterparts who have the necessary level of clearance I would say.

So those who wanted to understand that the threat was serious – they had all the possibilities to understand it. Those who want to reject it as Russian propaganda will do it anyway, so we are not very much worried about this.

Q: Ambassador, can I get your reaction to the fact that Ukraine has invited inspectors from the IAEA. That’s number one.

Number two – there are two controversies at the moment. One that you have raised about the possibility of a dirty bomb. The other is about Iranian drones. One – inspectors are coming in to try and clear up the matter. The other – you are blocking the inspectors. Why?

A: You should be more precise. This is a little bit of twisting the reality. Inspection of the drones that you are referring to is requested by several countries to happen within the framework of 2231, which is not a sanctions mechanism. This one can act only once the Security Council authorizes it to act. What we object to now is that this cell is asked to be used upon the request of several member states, which violates the integrity of the UN Secretariat. We will present our position in detail. I think it will be tomorrow in the afternoon when we discuss this issue.

A: IAEA is a different thing.

Q: Yes, but in terms of those inspectors – Ukraine has said “we got nothing to hide, we are inviting the IAEA”. What’s your reaction to that?

A: They can come. But as I explained, the problem is that dirty bomb is not a very sophisticated device. If you were reading Ukrainian Telegram channels, which are quite informative, you would see that there is a big fuss now in the Ukrainian ruling circles because of the campaign that we started to launch and a lot of indications that they are trying to wind down this program. Of course, they will have enough time to do it.

I am not an expert, and of course it is between Ukraine and the IAEA (if they agree to go). But I doubt if there is a possibility to be 100% iron-clad sure that there are no activities of this kind, even after this visit. But that is my private opinion.

Q: Your Western colleagues deny the allegations that there is a dirty bomb and they argue that this is not the first time Russia does this kind of allegation. They say that you did this before with chemical laboratories, a DoD program in Ukraine, etc. What’s your comment on that?

A: With chemical labs, this is not allegations but a very serious process, and we will continue with this. We have requested a meeting in two days in line with Article 6 of the BTWC. We launch a serious process and present a draft resolution in this regard. So it will not be so easy for our former Western partners to deny these claims.

As for the others, there was such a question in the AOB. My perception is that there are a lot of claims that we made about things that never happened. But shouldn’t we view it through the perspective that they never happened because we had raised those claims and Ukrainians were afraid to proceed with those provocations? Again, I can refer to Telegram channels which clearly indicate in many situations, this was exactly the case.

Speaking about allegations, I can also refer you to the situation with Zaporozhye NPP. It is an open secret that Ukraine is shelling the ZNPP, because we have absolutely no reason to shell the plant where we are present. So if Ukrainians are shelling the plant in front of the whole international community, creating a danger of a nuclear provocation. So why wouldn’t they create a dirty bomb? It’s the same logic.

Q: Ambassador, you asked this meeting today. What did you want to happen that did not happen? I mean what did you expect the Security Council to do after what you told them?

A: I am quite satisfied. We wanted to raise this issue, explain our position to the colleagues, appeal to their responsible attitude. I think we have got what we wanted.

Of course, Western countries are mostly saying that this is all Russian propaganda, that we think it out. But we are quite satisfied, because we raised their awareness of this fact. If this all does not happen, I do not mind people saying that Russia is crying wolf, because we are speaking about a terrible disaster that might potentially threaten the whole Earth. So the price is rather low – just several accusations.

Q: Why was the meeting held privately?

A: There were certain details that we did not want to disclose. They are only important for the members of the Security Council. But I gave you an account of this meeting, more or less.

Q: The details will be leaked anyway. So what are they?

A: Then wait until they are leaked. I am not going to be the spoiler.

Q: The letter that Russia wrote to the Security Council yesterday was signed by Ambassador Nebenzia. Where is he today?

A: In the office. We share responsibilities. I think you will see him. Don’t worry. We are working in pair.

Q: Where are these labs in Ukraine that supposedly make the dirty bomb?

A: They were enumerated in the letter, but if you want, it is the Kharkov Institute of Physics and Technology, and Institute for Nuclear research of the National Academy of Sciences of Ukraine located in Kiev.

A: Why would we need them? I haven’t heard about that, but it would be totally illogical. Why would you make a wooden pistol if you have a normal one?

Q: In the letter yesterday, Russia stated that you had never intended and do not intend to use nuclear weapons. But in his speech last month, President Putin said that all weapons were on the table.

A: It is your perception, but that’s not what he said. He confirmed the Russian nuclear doctrine, which admits usage of nuclear weapons when there is an existential threat to our country. And that’s what he said.

To my knowledge, the only readiness to use nuclear weapons came from the already sacked Prime Minister Truss. She said she was ready to push the button. I haven’t heard about anybody doing the same.

Q: To follow up on this. President Putin did say that all weapon systems would be on the table if Russia’s territorial integrity came under threat from NATO. So to say in the letter that you have never referred to the use of nuclear weapons is questionable at the very least.

Q: Did you tell the Security Council what would happen if the supposed dirty bomb that you say Ukraine is preparing is going to be used? Did you tell them what Russia would do?

A: We do not study these hypothetical scenarios. We want to avoid them. That is why we wanted to convene this meeting. But the task of the Ukrainian regime now is to get NATO directly involved in a confrontation with Russia. What happens if there is a direct confrontation of NATO and Russia I think you have imagination to assume yourself.

Q: Just to clarify. There is another meeting tomorrow…

A: Yes. We are keeping the Council busy this week. Tomorrow we are speaking about the integrity of the UN Charter in light of the requests for an investigation in the 2231 framework. And on Thursday we are asking for a meeting in line with Article 6 of the BTWC.

A: Yes, absolutely. We have nothing to hide.

PERMANENT MISSION OF THE RUSSIAN FEDERATION TO THE UNITED NATIONS