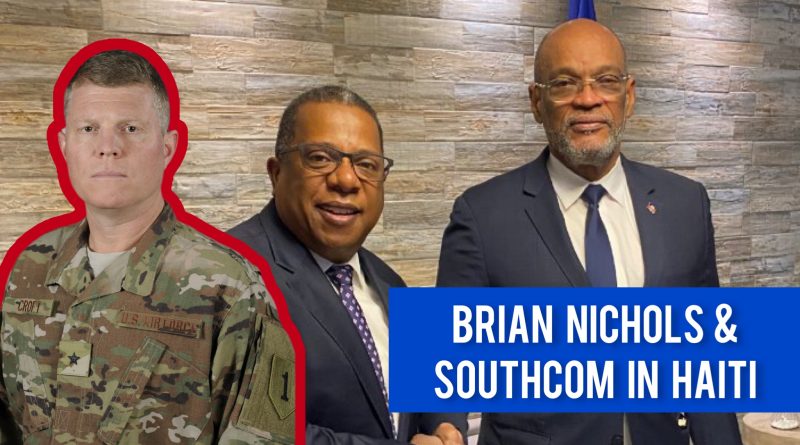 A US government delegation traveled on Wednesday to Port-au-Prince to meet with Prime Minister Ariel Henry amid calls from the Henry administration for foreign intervention in the country.

Biden’s Assistant Secretary for State for Western Hemisphere Affairs, Brian A. Nichols, headed the delegation and was accompanied by Military Deputy Commander of SOUTHCOM, Lieutenant General Andrew Croft, as well as senior advisors and personnel from the White House, the Secretary of Defense, Joint Staff, and the Department of State’s Bureau of International Narcotics and Law Enforcement Affairs.

“The U.S. remains a steadfast partner of the Haitian people & will continue to support Haiti in this critical time. I met with Haiti’s Government leaders, including @DrArielHenry, to reaffirm our commitment to help address the cholera epidemic and insecurity impeding that response,” Nichols tweeted.

A statement from the US embassy in Port-au-Prince reads, “the delegation will assess how the U.S. government can continue to provide various forms of assistance and promote accountability for those responsible for criminal acts.”

The U.S. Coast Guard also deployed one of its major cutters to patrol offshore Port-au-Prince on Wednesday.

This week’s visit comes after Haiti’s Prime Minister penned a letter to the UN Secretary General Antonio Guterres on October 7th, requesting military assistance to deal with the crisis in the country, in which armed groups have blocked the main oil terminal.

Popular protests and uprisings have intensified over the past week against inflation and currency devaluation as well as ongoing foreign occupation and US support for a corrupt government that was not elected by a popular vote or mandate. Organizations in the US are now adding their voices to those in Haiti which have long rejected attempts at more foreign intervention.

On September 30, The Black Alliance for Peace delivered an open letter to CARICOM (Caribbean Community), urging support for Haitian sovereignty and calling on the organization to oppose further calls for foreign intervention.