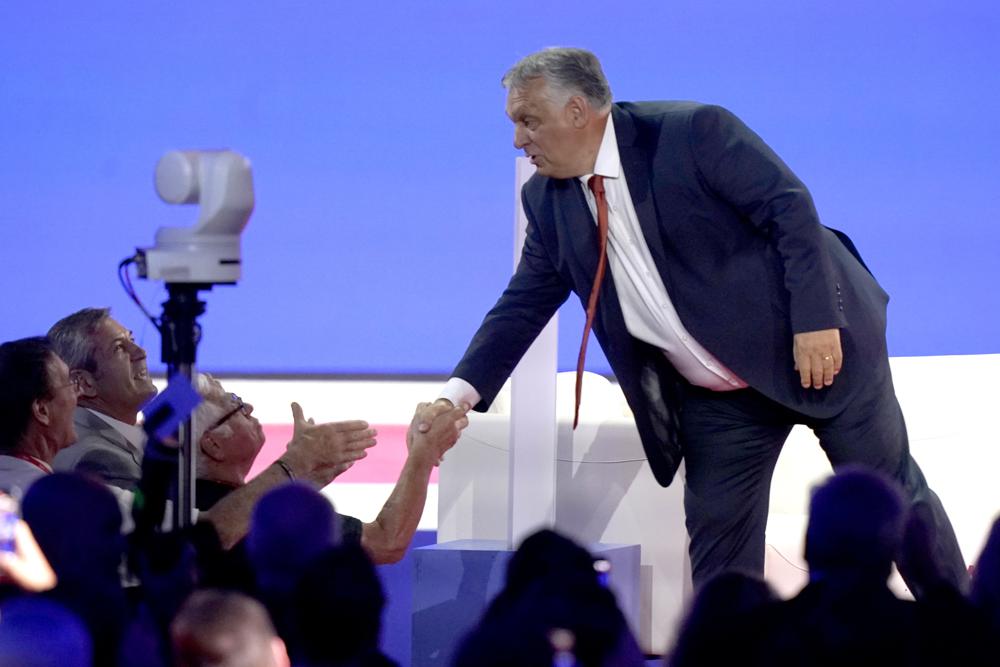 So did racist, homophobic, and Christian nationalist Hungarian strongman Viktor Orban. He invites comparison to dictators Miklós Horthy and Ferenc Szálasi, who allied Hungary with Hitler.

In an Old World speech before he jetted to Dallas for CPAC, Orban said Europeans shouldn’t “become peoples of mixed race.” Elsewhere in his remarks, he seemed to be joking about Hitler’s gas chambers when he commented on a European Union plan for rationing national gas: “The past shows us German know-how on that.”

Orban has praised Hungarians who fought in Hitler’s forces. “It should be evident by now that, unlike all the other postwar Hungarian governments that refrained from a close embrace of Hungary’s World War II military past, the Orban government looks upon the present Hungarian army as the rightful heir of those who fought alongside Nazi Germany and takes pride in their achievements,” according to Hungarian Spectrum online.

Historian and author John Hennen said many American far-rightists were fans of fascism and Nazism before World War II. Thus, said the retired Morehead State University history professor, “the MAGA infatuation with an authoritarian crypto-fascist like Orban should not be surprising. The ‘Christian Nationalism’ espoused by Q-Anon acolytes, ‘voter integrity’ crusaders, and AR-15 worshiping apocalyptists like Kari Lake, Doug Mastriano, and Marjorie Taylor Greene is hand-in-glove comfy with the racial purity dogma spouted by the Hungarian bully.”

When Hitler threatened war in Europe in the 1930s, much of America’s far right was “drawn more to the anti-Semitism of Mussolini and Hitler than to any filial sentiments toward the British,” according to Hennen.

He cited the isolationist America First Committee. “It originated as a principled campus-based pacifist group but was soon taken over by pro-authoritarian apologists. A burgeoning American pro-Nazi Bund flourished for a few years until Hitler declared war against the U. S. late in 1941.” (In February, 1939, the German-American Bund staged a rally at Madison Square Garden in New York that attracted a crowd estimated at 20,000.)

Right up to the moment the U.S. joined the war on the side of Britain, “the most prominent apologists for isolationist sentiment were Henry Ford and the aviator hero Charles Lindbergh, a devoted eugenics acolyte, philanderer, and disseminator of anti-Jewish rhetoric,” Hennen said.

Ford, the famous millionaire automaker, published the rabidly anti-Jewish Dearborn Independent newspaper. (He was also ferociously anti-union and even hired a private army of thugs to keep the United Auto Workers at bay.) In 1938, the Nazi regime awarded Ford the Grand Cross of the German Eagle, Germany’s highest decoration for foreigners. (After the U.S. entered the war, Ford switched his factories to building B-24 bombers, many of which pounded targets in Germany and Nazi-occupied Europe.)

Before the war, Lindbergh traveled to Germany, where he was feted by the Nazis, who deeply impressed Lindbergh and his wife, Ann Morrow Lindbergh, who shared his reactionary politics. They admired what they saw. In 1938, on Hitler’s behalf, Herman Goering, head of the Nazi Air Force, presented Lindbergh the Service Cross of the German Eagle. Lindbergh said the German military machine, especially the air force, was invincible, and he and Anne planned a permanent move to Berlin. (With the U.S. in the war, Lindbergh flew 50 combat missions in the Pacific as a civilian pilot. Even so, he never admitted he was wrong about Hitler.)

Coughlin represented a sort of merger between fascism and Christian nationalism. “The closest 20th-century parallel to the current Christian Nationalist ‘movement’ is the 1920s version of the Ku Klux Klan, which exploited the fears that White Americans had of Blacks migrating from the South to the industrial North and of the enduring presence of southern and Eastern European immigrants. As it became obvious that these ‘new’ immigrants were putting down permanent roots in the country, a post-World War I backlash aroused suspicions of their alleged radical sympathies and inability or unwillingness to become fully assimilated.

“Anti-Black, anti-immigrant, anti-Semitic, anti-Catholic, and anti-radical labor, the 1920s Klan set down the template for other reactionary movements such as the Black Legion, Crusaders for America, and the Knights of the White Camelia. William Dudley Pelley organized a thuggish band of Silver Shirts, with visions of taking over the country and expelling Jews.”

Canadian historian and author Seva Gunitsky similarly wrote that in the 1930s, the increasing acceptance of fascist ideas “was  reflected in the energetic growth of Nazi organizations. Ku Klux Klan rallies were common and numerous; Trump’s own father was arrested at one such rally, reportedly while wearing a Klan outfit. A 1941 book found that more than 100 such organizations had formed since 1933.”

In his Washington Post article, Gunitsky also cited Ford and the Lindberghs. He quoted Lindbergh’s praise of Hitler as “undoubtedly a great man.” In her best-selling book, Anne Morrow Lindbergh hailed totalitarianism as “The Wave of the Future” and an “ultimately good conception of humanity.”

Gunitsky added that Jews fulfilled “the same role for U.S. fascists that immigrants, Muslims, and other minorities serve today: a vague but malicious threat they believed to be undermining America’s greatness. Surveys of U.S. public opinion from the 1930s are a startling reminder of just how widespread these attitudes became.

“As late as July 1942, a Gallup poll showed that 1 in 6 Americans thought Hitler was ‘doing the right thing’ to the Jews. A 1940 poll found that nearly a fifth of Americans saw Jews as a national ‘menace’—more than any other group, including Germans. Almost a third anticipated ‘a widespread campaign against the Jews’—a campaign that 12 percent of Americans were willing to support.”

Coughlin, who boasted the country’s second-largest radio audience—trailing only FDR’s fireside chats—”frequently quoted Nazi propaganda minister Joseph Goebbels, and praised the Nazi quest for full employment and racial purity,” according to Gunitsky. Coughlin started his own political party in 1936; its candidate polled nearly a million votes. Not until early 1942 did the Catholic Church get around to silencing the cleric.

Gunitsky explained that “mainstream writers, presidents of major associations and editors of popular journals” were also sympathetic to fascism. “In his 1934 presidential address, the president of the American Political Science Association—the nation’s oldest and largest organization of political scientists—railed against ‘the dogma of universal suffrage’ and argued for abolishing a democracy that allowed ‘the ignorant, the uninformed and the antisocial elements’ to vote. If these reforms smacked of fascism, he concluded, then ‘we have already recognized that there is a large element of fascist doctrine and practice that we must appropriate.’”

In his 1935 dystopian novel It Can’t Happen Here, Sinclair Lewis wrote about the rise of an American Hitler. It didn’t happen here then.

Evidence is mounting that Trumpism is morphing into a form of fascism. (President Joe Biden called Trumpism semi-fascism.) “Fascism is a specific style and practice of authoritarian politics, which Trump then, and Trumpism now, re-creates—one that has specific character traits without having any axiomatic ideology, taking on new aspects in each new nation that it afflicts,” wrote Adam Gopnik in The New Yorker last month.

“Fascism is, by its nature, chaotic and incoherent and chameleonic—that’s why it needs a strongman to organize around. The confusion and the lack of ideological rigor in Trumpism, which some point to as proof of its ultimate impotence, is part of fascism’s nature.”

Lifelong Kentuckian Berry Craig is an emeritus professor of history at West Kentucky Community and Technical College in Paducah and a freelance writer. He is a member of American Federation of Teachers Local 1360, recording secretary for the Western Kentucky AFL-CIO Area Council, webmaster-editor for the Kentucky State AFL-CIO, and a member of the state AFL-CIO Executive Board. His ninth book on the history of his state, “Kentuckians and Pearl Harbor: Stories from the Day of Infamy,” was published by the University Press of Kentucky in November 2020.

What Did Malcolm X Really Think about the Democratic Party?

USA: Hundreds in Congress, Law Enforcement and Military are Members of Fascist Groups

Ukraine: The Testing Ground for the USA’s Own Fascist Terror Campaign

Sleepwalking Into Fascism: Why CIA/NATO’s Foreign Policy Has Been Consistent for the Past 77 Years

US, Ukraine Vote Against Anti-Nazi Resolution Proposed by Russia at UN General Assembly

For the Eleventh Straight Year, United States Votes “No” to UN Anti-Nazi Resolution