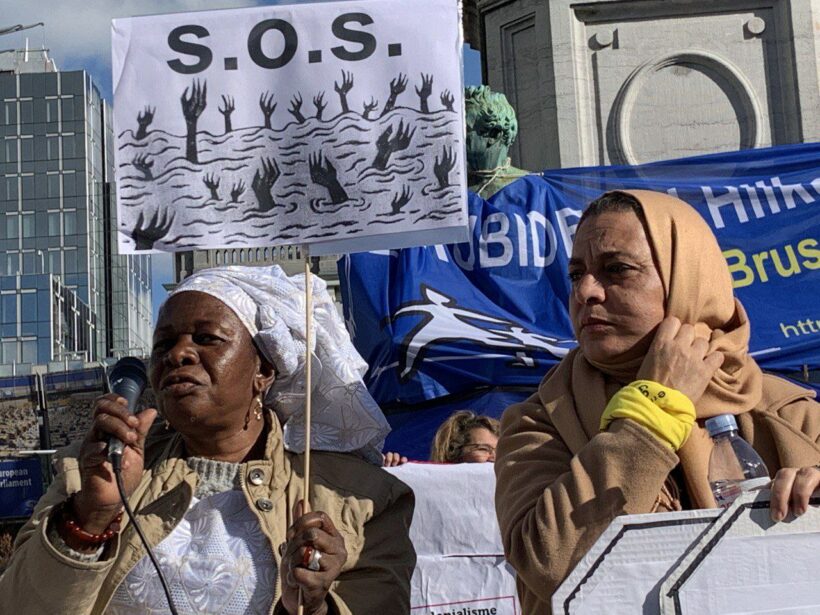 The March to Brussels has ended with a call for the strengthening of a strategy and a change in the balance of power that allows for a different migration policy based on the fulfilment of human rights.

Several hundred people took part in a protest action in front of the European Parliament to demand compliance with international human rights law at borders and the administrative regularisation of people living and working in Europe, while holding a People’s Summit on Migration.

The events, organised by 23 organisations from different European countries and supported by more than 150 organisations, began on Thursday with a meeting between a delegation of the March to Brussels and a group of MEPs from the migration committee. During the meeting, Jalila Taamallah, a Tunisian mother of two children who died on their journey to Europe, denounced a business in which the countries of origin charge for the return of people, while the families are forced to pay for the repatriation of their relatives who died in transit. For his part, Hassane Boukar from Niger raised the question of whether we have asked ourselves what is the price of putting obstacles in the way of reducing the transit of migrants, and Leandro Navarro, from No Name Kitchen, denounced the systematic use of violence at borders with total impunity, which constitutes a danger for people in transit and for society as a whole. Sophie Duval of CCFD-Terre Solidaire concluded that it is time to put an end to violence financed by pacts with the European Union. 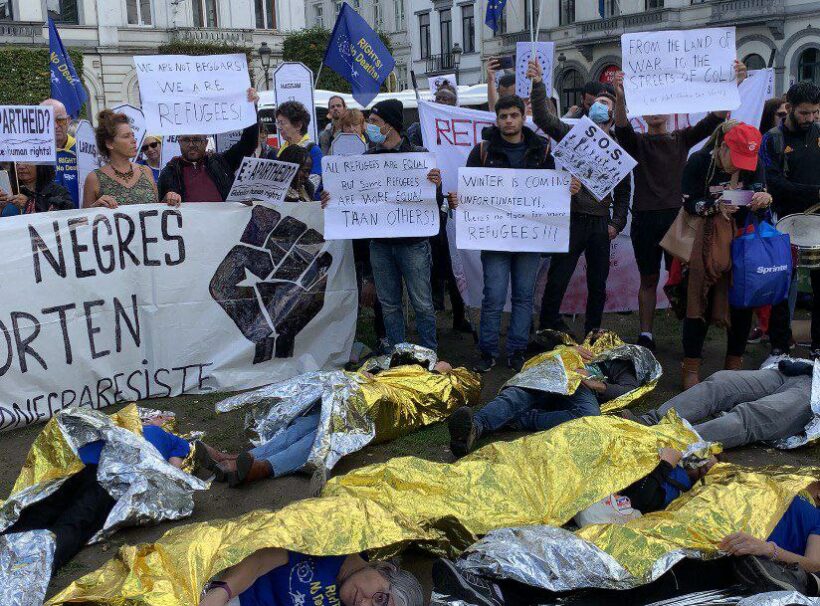 While the meeting was taking place, a hundred or so participants in the March to Brussels went to the Vottem Centre for the Internment of Foreigners to hold a protest rally in support of the detainees and the groups that have been fighting for almost 25 years to close the centre. A thousand people a year pass through this CIE, two thirds of whom are expelled. There are six similar centres in the territory and the government has plans to open three more. 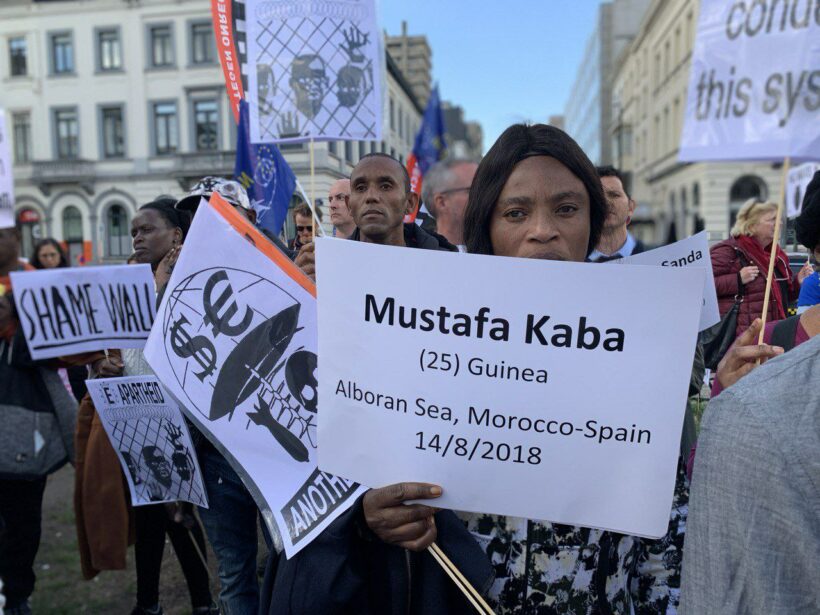 “They are the symbol of fortress Europe and show that far-right ideology is spreading to parties that used to be in the centre,” said a spokeswoman, while reporting that 60% of asylum seekers are rejected, that all those who rebel or disagree are locked up in isolation cells and that there are many people on the edge, there are many suicide attempts and suicides.

“There is now a young Cameroonian man who has been on hunger strike for seven days”.

The collective of resistance to detention centres goes there every Saturday and carries a ladder to try to communicate with the inmates, providing them with a contact, mobile phone recharges, etc. During the subsequent meeting with the Liège collectives, they told of the existence of many struggles, with demonstrations and occupations of buildings, and the participation of people without papers in the social and associative life of Liège, despite the difficulties in accessing a health card, accommodation, employment or formation. “We had a regularisation in 2000, in 2009 and since then nothing. We want permanent regularisation, not a one-off event”. Their strategy is to try to bring together as many associations as possible, such as trade unions, and to get the support of the public authorities.

“This is how we managed to get Liège to be considered as a host municipality and even to get the municipality to make buildings available. Sandrine from La Voix des sans papiers denounced the condemnation to work informally, which leads to exploitation and violence. “

All this is like a chain of slavery. Some people agree to have sex in order to have accommodation. That’s why we fight for our rights. There is no clear criterion for regularisation here. There are criteria for asylum, but for regularisation you don’t know what the criteria are. We can’t go forward and we can’t go back. Our lives are cut short. This is why we are in this struggle. There are 150,000 undocumented people in Belgium who can contribute to the country’s economy if there is regularisation. Now only the bosses benefit and there is exploitation, you work 14 or 15 hours for 30 euros a day, without knowing if you are going to get paid. Undocumented workers are members of the union without paying dues. 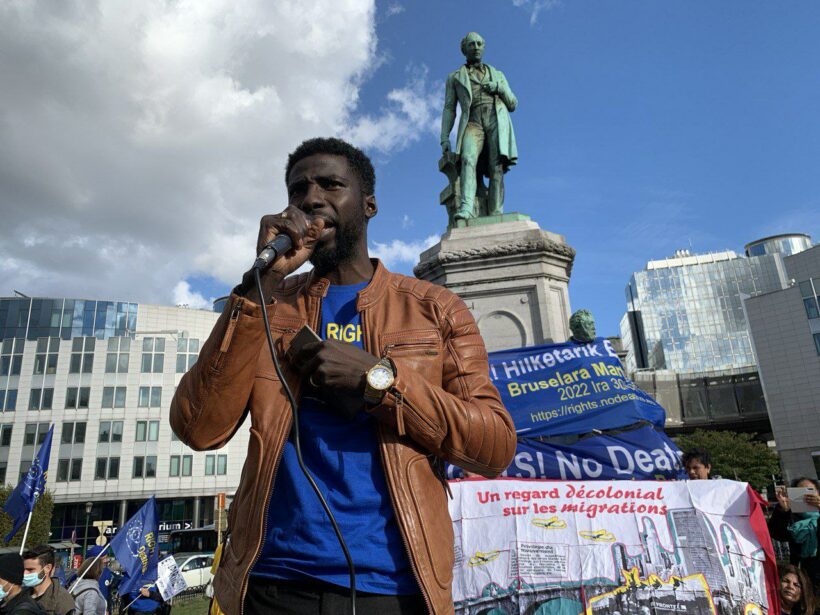 On Friday, a meeting was held between the groups participating in the March to Brussels, where the groups of undocumented workers in Brussels gave an account of their struggle and the hard hunger strike, they held for two months last year, in which they denounced that the agreement reached with the government has not been respected and they continue their struggle for a bill, while defending the need for a European march to recognise undocumented workers.

“The government set up an office called the neutral zone to introduce the files of the comrades. People thought that this would solve their papers. But we don’t like the word neutral zone, it’s not a war. It is a struggle for fundamental rights. We started the occupation of a bank with two objectives: to denounce that the cause of the problem is the world economic system and to denounce the political system in Belgium that exploits us. It’s called the “In my name” campaign. 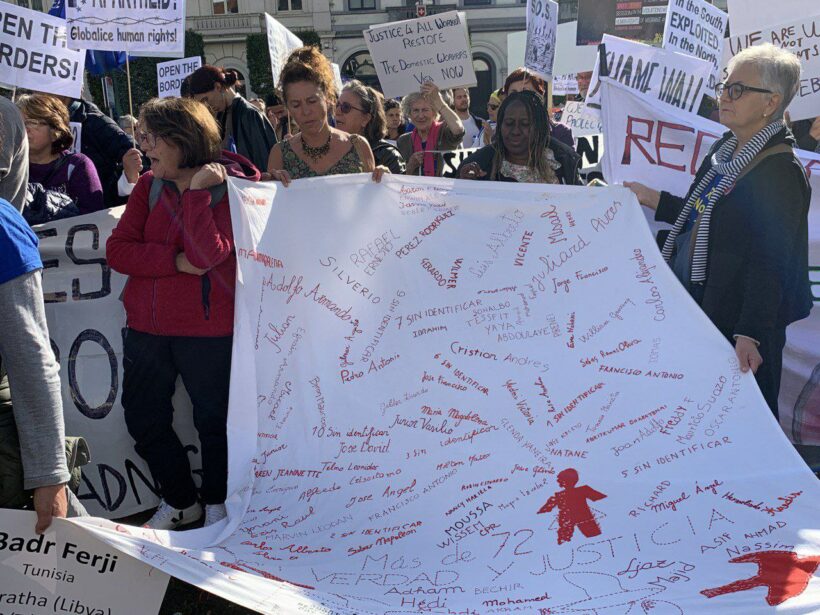 For her part, Fernanda from the Regularisation movement of the Spanish state reported on the campaign to collect 500,000 signatures to promote a Popular Legislative Initiative, of which 400,000 have already been obtained, and on the importance of achieving the administrative regularisation of the 500,000 people who live in the Spanish state, of whom one third are in the host city councils, and that the city councils should even make buildings available to them. 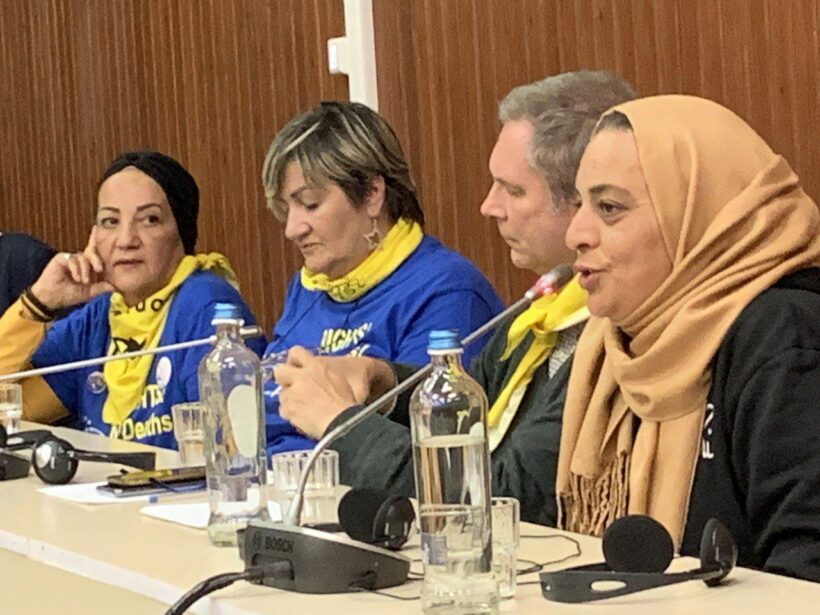 On Friday afternoon, the plenary of the People’s Summit on migration began, where at least 250 people participated during the two days of the Summit, with simultaneous workshops on 6 thematic areas: subcontracting and border businesses; dynamics of reception and local and networked solidarity; criminalisation of migration and solidarity; neo-colonialism, crisis and migration; the struggle for regularisation and access to rights; and documentation, memory and justice in relation to border violence. The workshops shared anti-racist, anti-colonial and feminist struggles. 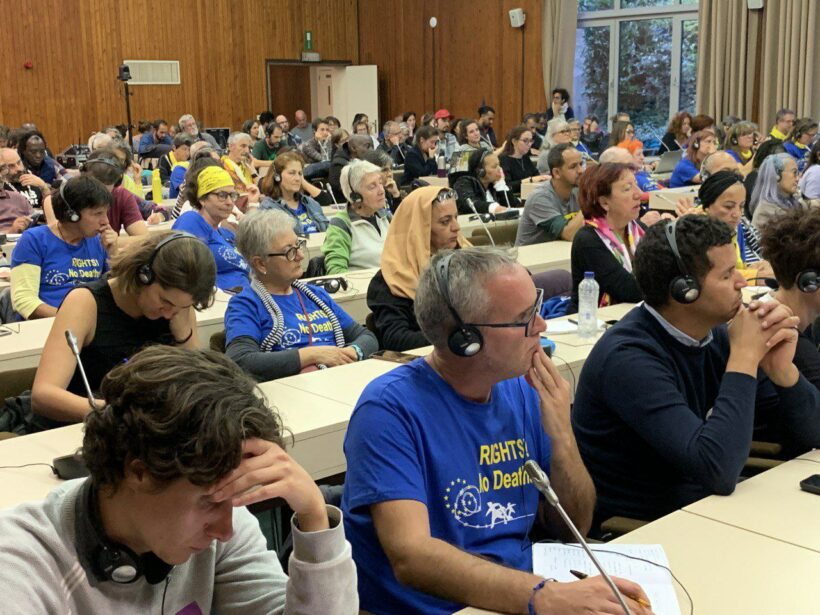 During the weekend, the participants also had the opportunity to take part in various activities such as a meeting of the World March of Women, visits to houses occupied by people without papers, a lobby tour of the European quarter to learn about the EU’s involvement in arms trafficking, a visit to the colonial memory and the struggle against discrimination, and a visit to the Beguinage Church where the people who took part in last year’s hunger strike stayed. The summit concluded with a call for solidarity, for convergence between social movements and to strengthen a strategy against governments that encourage xenophobia in order to change the balance of power and make another migration policy in favour of human rights possible. “Because what we allow to happen at the borders will determine what happens in the rest of the world. Borders are a space of struggle, resistance and alliance-building. Without struggle and without intersecting and linking struggles there will be no rights, so we will go forward to build lives worth living, because our lives are at stake.

A Walled Europe: The Shadow of the Middle Ages in Migration Policies

Europe’s Treatment of Refugees is Racist and Murderous