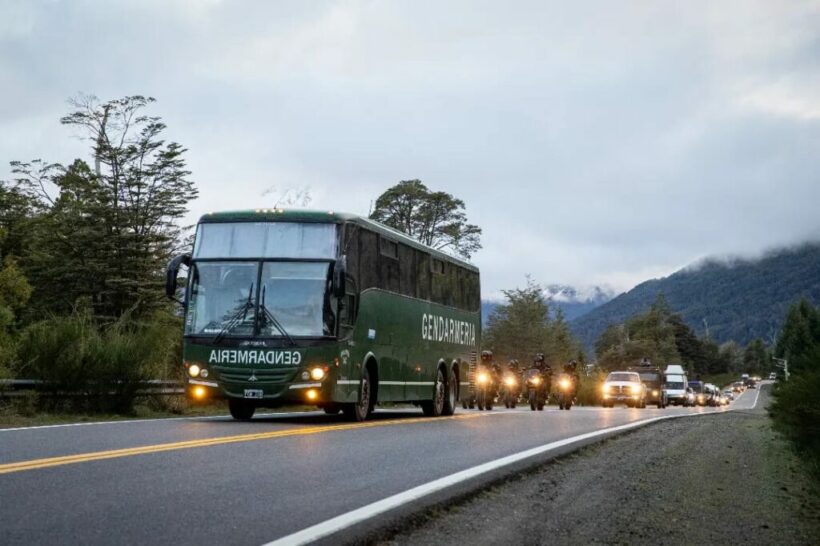 In the early hours of this morning (4), by order of the Ministry of National Security, a “unified command” made up of federal forces of prefecture, gendarmerie and federal police with the collaboration of the provincial police of Río Negro, advanced by land and air on the Mapuche community Lafken Winkul Mapu in Lake Mascardi.

250 heavily armed troops confronted a community of 30 people, including children. In order to carry out the operation and to prevent access by other communities and the press, the land accesses were immediately closed.

At the time of this publication, 8 Mapuche women – among them a pregnant woman and the machi Betiana Coluan Nahuel -, 3 men and 5 minors – 2 of them babies – are reported to have been arrested, while other children and adolescents are being chased through the nearby forest.

The situation is spread through social networks with anguished requests for denunciation and help from the sister communities, who see situations like those that ended the lives of Rafael Nahuel in November 2017 – in the same Mascardi Lake – and Elías Garay in 2021 repeating themselves.

The operation deployed responds to a request for national support from the provincial government, afterwards a gendarmerie post was set on fire in the area last week, immediately attributed without any basis to “Mapuche groups”. The real conflict is that of the Mapuche people’s struggle to live on their ancestral territory, in the face of a sector of society that claims to defend a national sovereignty that is supposedly under threat, while deploying its resources in the media and the “justice system” to guarantee its ownership of these lands.

“Wherever we try to recover land, there is conflict”, says Mauro Millán, lonko of the Pillán Mahuiza community, in a radio interview. “Even if we go to return to our territory in the middle of the rocks, they always say ‘and why here?’ And where do they want us to go to live? To the moon? To Mars? This is our ancestral territory! Why not? Why can’t we return to our territory?”

“Indigenous rights are not in our pockets: they are constitutional regulations that have never been applied. In the constitutional reform of 1994, the state committed itself to the delivery of suitable and sufficient land, but that never happened, and we, the minorities that have been violated, have to fight for our rights”.

Asked about the ownership claimed by local businessmen over some of these lands, he says:

“And yes, the lands are in other people’s names because when our territories are usurped, ownership is easily handed over to them. We have been fighting for years for a community property law. Years! On the other hand, any businessman asks for it and overnight he has ownership of the land. I don’t know if they have a deed, but how come nobody is investigating how these people can get their hands on property within the National Parks?

The lonko also expresses his indignation at the press that accuses them with impunity, as happened with the recent fire at the gendarmerie post:

“Infobae said it clearly: ‘Mapuches set fire to gendarmerie post’. It took us to an express trial, played the role of judge, prosecutor, plaintiff, and ruled that we had set it on fire. And I say we because when they talk about Mapuche we all take charge, so they accused me of having set fire to it. It was never proven that it was the lof Winkul. Of course the post is close by, but it doesn’t mean that the lof set it on fire. They said it was the RAM, that they were drug traffickers…”.

Meanwhile, APDH, the Permanent Assembly for Human Rights, expressed its support, saying among other things: “As we have already reiterated, the way to solve this conflict and so many others in our country with the native peoples is through dialogue, as indicated in ILO Convention 169, and not through their criminalisation”.