Socialist Movement of the Workers of the Dominican Republic 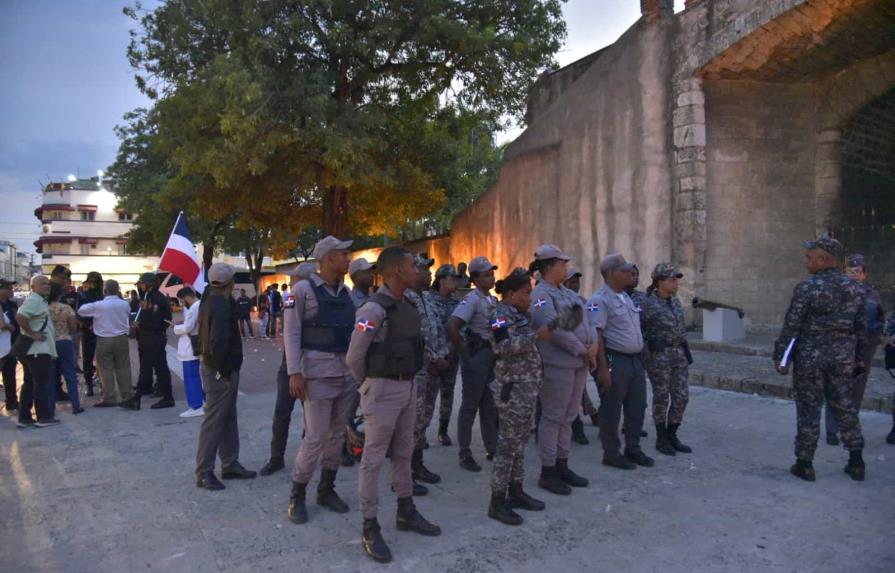 Any act of solidarity with the Haitian people in the Dominican Republic is blocked by the national police force and Neo-Nazi groups.

The deployment of dozens of Members of the National Police, in coordination with a smaller group of neo-Nazi militants, occupied the surroundings of the Independence Park of Santo Domingo on Thursday to block the realization of an act of solidarity with the mobilizations in Haiti against imperialist interference. The event had been convened by the National Popular Coordinator, which brings together dozens of Dominican social organizations. Under police protection, neo-Nazis chanted slogans calling for the murder of “the traitors,” a term by which they commonly refer to human rights defenders and left-wing activists.

Since the previous day, neo-Nazis of the Old Dominican Order, a group that publicly vindicates Mussolini and Trujillo, as well as other groups had threatened the organizers of the act of solidarity, claiming that they were Haitians, and calling on their supporters to attend armed with sticks and stones to the Independence Park. Using conspiracy theories similar to that of the “great replacement” that neo-Nazis agitate in the US and Europe, the Dominican far right claims that there are “globalist” plans by institutions such as the UN for an alleged merger between the Dominican Republic and Haiti. These same groups often propagate anti-vaccine conspiracy theories, against sex and reproductive education, and against the rights of women and the LGBTQ community.

A press release from  the National Police indicated that “prohaitianos” were denied the right to carry out peaceful activity, another term commonly used by the far right to refer to members of democratic, leftist or anti-racist organizations. “The issue of the sovereignty of the country and the defense of the best national interests will never be questioned during the administration of President Luis Abinader,” the note added, coinciding with the neo-Nazi discourse on the alleged anti-national character of the convocation of the National Popular Coordinator.

This modus operandi of fascist groups is recurrent, making death threats and then acting in conjunction with the National Police to prevent the exercise of the democratic rights of the Dominican people. This is despite the fact that legally the National Police is defined as an apolitical and non-partisan institution. The Attorney General’s Office, which the government of businessman Luis Abinader presents as “independent”, has not acted against these terrorist methods despite the fact that in the last three years letters have been presented demanding the opening of investigations . It is clear that this is a policy of the regime, shared by the right-wing governments of the PLD (2004-2020) and the PRM (2020-present).

In December 2018, before a sports activity on the occasion of International Migrants Day, convened by the Haitian collectiveRD in the Mirador Sur park in Santo Domingo, fascist organizations threatened that there would be a “bloodbath “. The authorities, instead of investigating these terrorist threats, chose to withdraw the permit for the sports activity. The newspaper Diario Libre, one of the newspapers with the largest circulation in the country, published an editorial in which it described the call, and the subsequent denunciation of the threats, as a provocation  that could trigger a genocide like the one in Rwanda against Haitian immigrants.

In June 2020, neo-Nazis acted in coordination with the National Police to prevent a public tribute to George Floyd  in Santo Domingo. Two anti-racist activists were arrested by police officers. Despite the repression, the activity was carried out. In November 2021 , the National Police prevented on three occasions the realization of mobilizations towards the National Palace by the Union of Sugarcane Workers, a union organization that groups retired workers who have been demanding for a decade the payment of their pensions to the Dominican State. Simultaneously, fascist groups gathered in front of the National Palace under police protection , declaring to the press that they would make blood flow if the protest reached that place.

This de facto alliance between the government of Luis Abinader and fascist groups is based on their coincidences around the racist policy  it carries out against the Haitian immigrant community, including the construction of an expensive wall on the border with Haiti, the illegal expulsion of pregnant women  and infants separated from their parents, the repression against the workers  and the demand for greater imperialist interference in Haiti, with the sending of a “robust force  for peace”, a euphemism that means a new military occupation. Mass expulsions of Haitian immigrants, already in July exceeding 57,000 , are carried out in systematic violation of human rights, including numerous allegations of torture and murder . Abinader also pursues a racist policy of arbitrary detentions  against the Dominican community of Haitian descent , which since 2013 constitutes the largest stateless population in the Western Hemisphere. For these reasons, the fascist march of August 6  in Santo Domingo, small but with a lot of media support, was a mobilization of critical support for the government, supporting its measures but demanding its acceleration and intensification.

The massive mobilization of the Haitian people against the authoritarian and illegitimate regime of the PHTK, chaired by Ariel Henry and supported by the Core Group, headed by the governments of the United States, Canada and France, has been developing for several weeks. It gained strength after a drastic increase in the price of fuels was imposed, under IMF guidelines. The alliance between the Dominican government and the far right will not prevent solidarity with the struggle of the Haitian people from being expressed. Already the left, democratic and anti-racist organizations are taking steps towards the call for a new and more forceful solidarity action.

This article was originally published in the Socialist Movement of the Workers of the Dominican Republic .

Socialist Movement of the Workers of the Dominican Republic – “We are a Dominican socialist organization that bets on the self-organization of the working class and its mobilization for the conquest of rights and the dispute of political power. We understand that the unity of workers is forged in the struggle against exploitation, racist and patriarchal oppression and against all forms of discrimination that we suffer in our country and the world. Faced with the irrational depredation of nature, we fight for a democratic planning that allows the environmental sustainability of the economy, the only alternative to the prospect of climate collapse to which the capitalist system leads us.”