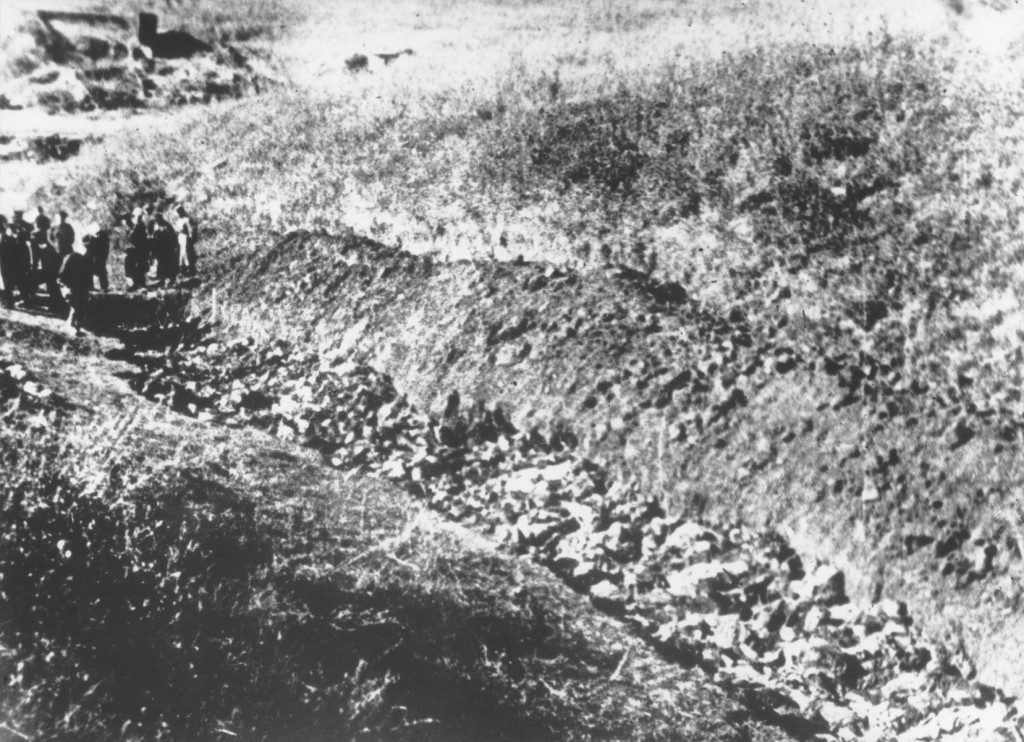 On 29-30 September 1941, more than 30,000 Jews were killed in Babyn Yar, Ukraine, in what was one of the largest massacres to be perpetrated during the Holocaust.

81 years later, the Jewish community, and all those who would resist fascism, remember

What they rarely do, liberal or conservative, is tell the truth about the Holocaust. This deception includes the massacre at Babyn Yar.

A standard narrative among the fascist movement and, unfortunately, government officials in Ukraine and its Baltic allies is that Babyn Yar was a despicable Soviet plot designed to cover up their mass slaughter of innocent Jewish children and deflect attention to Nazi Germany.

The fact is, there is an incredible amount of disinformation and propaganda regarding Babyn Yar when the truth is fairly simple. The SS Galicia division, aided by Banderite collaborators, murdered over 33,000 Jews over the span of two days. The vast majority perished on the first day. Only 29 Jews subjected to this horror survived to tell the tale. That’s the truth not seen on CNN, BBC, or other big business media.

What’s important to understand is that Babyn Yar was not an isolated incident but a culminating event after a summer of horrific anti-Semitic and anti-Roma pogroms. Behind the terror in the summer of 1941 were the Stepan Bandera-led Organization of Ukrainian Nationalists (OUN), the SS, and other Nazi collaborators.

This article aims to recognize the anniversary of the Babyn Yar tragedy through a truthful analysis of contemporary conditions and an examination of history.

The depth of Nazi terror and the Holocaust in Ukraine would not have been possible without a substantial, organized population of collaborators. Ukraine had exactly that.

Contemporary Ukrainian nationalist propaganda often touts the great resistance in Ukraine against the Nazi and Soviet invaders. As if making the two equivalent isn’t bad enough, the analysis is a historical fantasy.

Some 100,000 Ukrainians joined Nazi police forces during World War 2. That number does not include the ranks of the OUN nor the SS Galicia Division. Frankly, the level of Ukrainian collaboration with Nazi Germany was likely the most severe on the European continent, except for maybe Poland.

On January 1, 1941, almost 2 million Jews lived in Ukraine. By the time Bandera and Hitler were done, nearly 1.6 million of those people were dead. This did not happen without a significant Ukrainian fascist movement willing to collaborate with Nazi occupiers.

This depth of collaboration is exactly what allowed SS forces to perpetrate massacres like Babyn Yar. It’s crucial to understand that Babyn Yar was simply a culmination of a Nazi terror campaign against all those they viewed as sub-human. This included Jews, Roma people, Communists, Russians, Poles, LGBTQ2S people, and even Ukrainians.

A fallacy has long existed that Nazicollaborationismm and fascism will save an occupied country from Nazi violence. This fallacy has repeatedly led countries like Ukraine to its destruction. This was the case during World War 2, and it is certainly the case now.

The actualization of this fallacy is no better demonstrated than by how quickly the Ukrainian community threw itself into anti-Semitic organizing once the Nazi invasion began in 1941. As soon as Hitler began his invasion of the USSR, the OUN and similar organizations sprang into action against all those who opposed fascism. The OUN had been working with the Nazis for years before the bloody summer that began with the 1941 Lviv pogroms and was bookended by Babyn Yar.

In furtherance of this proclamation, the OUN launched a pogrom of unprecedented proportions the next day, centered in Lviv. The slaughter was immediate and brutal. In less than 12 hours, OUN militants murdered nearly 10,000 Ukrainian Jews. This began a summer of OUN terror against Ukrainian Jews, including a late July massacre known as the “Petliura Days.”

Symon Petliura was a famed Ukrainian nationalist leader and rabid anti-Semite. Petliura was infamous for his particularly brutal pogroms against Ukrainian Jews in the early 20th century. Approximately 2,000 more Jews would be murdered in his name over the span of less than 24 hours in late July 1941.

This is all to say Babyn Yar came as the summer’s Nazi terror reached a fever pitch. Ukrainian collaborationist organizations were fully mobilized and formed. This allowed the Nazi army and the SS to gain a substantial foothold in Ukraine.

The result? Babyn Yar — arguably the most notorious anti-Semitic massacre of the Holocaust. German SS paramilitary forces and the recently formed Ukrainian Auxiliary Police carried out this massacre.

Babyn Yar sticks in the collective memory of all those who would oppose Ukrainian Nazism and NATO imperialism as a firm reminder of fascism’s capabilities.

Since the fall of the Soviet Union, Stepan Bandera has again grown into a popular symbol not only for the Ukrainian Nazi movement but for the Ukrainian government of itself. It is not uncommon to see UAF or fascist battalion troops wearing Bandera patches or waving flags laden with Bandera’s face.

In the years leading up to Russia’s  2022 denazification campaign, mass Nazi demonstrations were held in western Ukrainian cities, including Kiev and Lviv. Crowds between 40,000 and 70,000 Nazis brandished swastikas, the Right Sector trident, and flags donning Stepan Bandera’s face. These are the people that really run Ukraine. Whether civilian organizers, elected politicians, or the NATO-equipped military, the veil of “Ukrainian democracy” only thinly covers the fascist reality.

These forces want to create a new Holocaust, a new Babyn Yar, directed at all those NATO deems undesirable: Russians, Jews, Roma people, all Slavic people, anti-imperialists, communists, socialists, etc. NATO uses the people of Ukraine as meat shields to further its goal of white supremacy and genocide.

One of the few images captured of Babyn Yar depicts a Jewish mother, stripped naked, trying to protect herself and her child from a SS trooper poised to execute her baby in front of her eyes. She was one of my people. Her child was one of my people. The Ukrop Nazis and their SS handlers murdered her and tens of thousands of others just like her and her child. Stepan Bandera adored this picture. He carried it with him until his death as a reminder of what he was fighting for, the purging of all “mongrel races” from Ukraine.

This is what all anti-imperialists, wherever we are, must resist. We must fight against all forms of imperialism, from racist police terror in the U.S. Black community to Ukrop nazi terror in the Donbass. The global working class defeated Bandera once. We must defeat his descendants now, or we will be subject to a million Babyn Yars.

Lev Koufax is an anti-zionist Jew with ancestral roots in Russia and Ukraine.