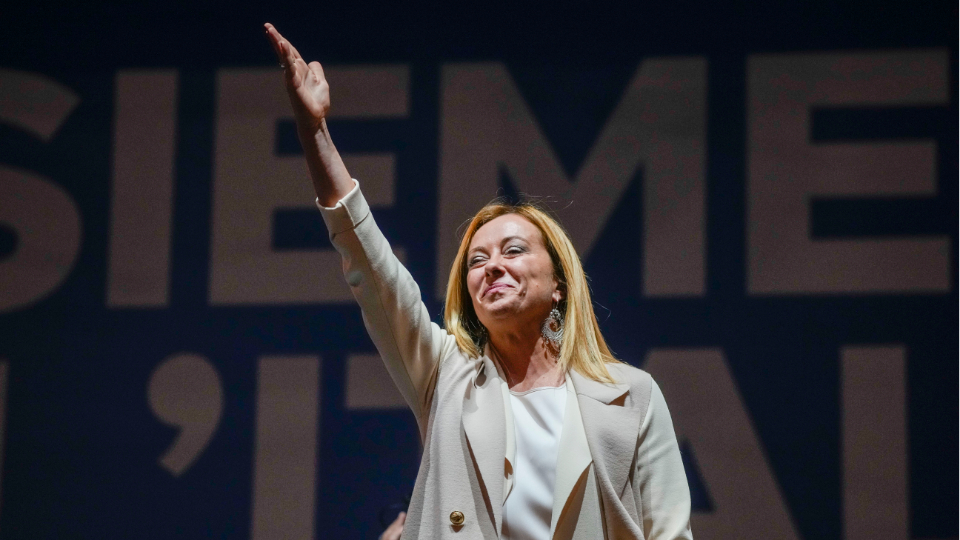 Tally another victory for the neo-fascist, anti-immigrant right wing in Europe. Giorgia Meloni, leader of the Brothers of Italy party—the successor to the post-World War II Italian Social Movement—is set to be the next prime minister of that country following Sunday’s national election.

Almost exactly a hundred years after fascist leader Benito Mussolini made himself dictator of Italy with his notorious October 1922 “March on Rome,” his political heirs are marching back into power. Meloni will be the nation’s first far-right leader since Il Duce was overthrown and executed by Communist partisans in 1945.

Her right-wing bloc won a decisive 44% plurality in the country’s multi-party elections, with the Brothers of Italy alone taking more than a quarter of the vote. The center-left coalition led by the Democratic Party, successor to the old Italian Communist Party, scored only 26%.

Speaking at a rally early Monday morning, Meloni hailed her party’s win as the expression of the will of the Italian people. “If we are called to govern this nation, we will do it…. Italy chose us. We will not betray it.”

While the result clearly represents a dramatic shift to the right, it is not necessarily a signal that voters are swinging in line behind the neo-fascists. Overall turnout was only 64%, a historic low by Italian standards.

Some poll results suggested droves of voters simply stayed home in protest, expressing their dissatisfaction with the anti-democratic backroom deals that put the previous three governments into office—including the outgoing administration of Premier Mario Draghi.

Sunday’s vote was a snap election forced by the sudden fall of Draghi’s “technocratic” government. His cabinet lost the support of parliament because of a number of contentious stances, chief among them Draghi’s vigorous support for NATO weapons shipments to Ukraine.

A €200 billion ($192.5 billion USD) bailout for Italy from the EU Commission hangs in the balance right now, as rising global interest rates threaten economic crisis for the country, which holds a public debt that currently stands at 135% of GDP. EU officials say that in order to get the money, Italy’s government must balance the books and slash spending.

While Europe’s leaders remain tight-fisted when it comes to COVID recovery cash, Italy’s real problem may not be reckless government spending, but rather Italian capitalism’s persistent failure to compete with the powerful economies of Germany and France.

Following WWII, Italy enjoyed a competitive advantage relative to some other Western European countries because of its low wages and heavy infusions of U.S. credit. This provided the basis for a short-term postwar boom, but eventually, the corruption and oligarchical nature of Italian capital became obvious. This led to a decline in foreign investment; the energy crisis of the 1970s exacerbated the problem further.

Productivity growth steadily declined over the decades that followed, with only a slight recovery when neoliberal reforms in the 1980s squeezed more labor out of workers. But even this was not enough, and productivity turned negative once Italy joined the euro currency bloc.

Since the adoption of the common currency in 1999, annual per capita economic growth has been stuck at zero. Even when accounting for the generally slower productivity growth of late capitalist economies and the recessions of recent years, competitors like Spain, France, and Germany still managed to notch growth rates of 1% or higher.

Years and years of no growth mean Italy is also trapped in a never-ending crisis of unemployment. The current youth jobless rate hovers around 25%, while nearly half of young people without work are classified as “long-term unemployed.”

This productivity and job growth collapse is the direct result of stagnant investment by Italian capital, which remains well below the levels seen before the Great Recession of 2008-09. The disadvantages of being crammed into an economic union with big German and French capital and the damage from the global financial collapse have meant that the profit payoff isn’t enough to entice Italian capitalists to invest in growth.

The historic divide between the industrialized north of Italy and the more agricultural south also meant these economic problems worsened the challenge of national disunity, which shows up in election results. The right’s support grew fastest in areas of the underdeveloped south.

When she takes over, Meloni will inherit all these challenges. A look at the history of her party and its constituency provides some clues as to how she may govern.

The Brothers of Italy traces its roots directly to the Italian Social Movement (MSI) party, founded in 1946 by members of Mussolini’s then-outlawed National Fascist Party. Allied with Adolf Hitler’s Nazi regime during the 1930s and ’40s, Italy’s fascists fought alongside Germany in WWII and instituted their own anti-Jewish laws and policies forbidding independent trade unions and progressive political groups.

Following the defeat of Italy and Germany by the Allied powers, the neo-fascists of the MSI reorganized themselves, but only managed to poll in the single digits from the 1950s to the 1980s. But its survival kept the nationalist and authoritarian alternative on the table for the lower middle class, the economically discontented, and big business—if it ever felt compelled to call on it again.

As Italy’s economic fortunes worsened, the MSI saw an uptick in its support, almost winning the mayor’s office in Rome in 1993. To shed some of its most blatant fascist baggage, the party was renamed the National Alliance.

Meloni, raised in a working-class Rome neighborhood by a single mom, joined the movement around this time, eventually becoming head of the party’s youth league. She helped found the Brothers of Italy in 2012, merging together a number of like-minded neo-fascist and right-wing groups.

Meloni says the Brothers of Italy is “a new party for an old tradition.” And like previous MSI and National Alliance leaders, some of her kind words for the former dictator and his “old tradition” have come back to haunt her.

She’s tried to publicly disavow the brutality of the fascist period, but also walks a tightrope trying to appeal to the voting base that yearns for a return to the days of Mussolini. Meloni declares the Italian right has left fascism behind in the history books and condemns the old regime and its “suppression of democracy” and “ignominious anti-Jewish laws.”

But at the same time, she rails against immigrants, LGBTQ people, and “Islamic violence.” And in an unmistakable signal to the movement’s old-timers, she has kept the MSI’s original fascist red-white-green flame logo on the Brothers party flag.

Regardless of all the history acrobatics, it was probably Meloni’s repeated condemnation of EU officials and their fiscal warfare on Italian workers that gained her the most support.

Staking out clear opposition to the financial blackmail of the EU and the continent’s big banks provided a stark contrast to the weak and ambiguous positions taken by social democratic and center-left politicians. The inaction of the left provided an opening for the extreme right, which Meloni seized.

As with right-wing leaders around the world who say they’re for the workers when running for office but then govern for the bosses after winning, Meloni has already begun to make moves that go in the direction opposite her populist pledges. As voting day neared, she toned down her anti-EU rhetoric, portending a turn once she assumes power.

Meloni’s shift toward fiscal austerity will probably mean little will change in economic policy; she will likely follow the dictates of the EU’s financial masters and even throw in extra anti-labor policies for good measure.

No changes should be expected in Italy’s foreign policy either, despite the anti-war and pro-Putin positions taken by some of her coalition allies, like former Prime Minister Silvio Berlusconi and former Deputy Prime Minister Matteo Salvini.

Meloni is the strongest figure in the alliance, and she is in lock-step with NATO when it comes to continued weapons shipments to Ukraine. The same position may have cost Draghi support, but Meloni is almost guaranteed to stick to his policies when it comes to the war.

The Brothers of Italy victory is the latest and most dramatic in a string of right-wing gains in Europe.

Just days ago, the Sweden Democrats, a party with neo-Nazi roots, made their governmental debut in Scandinavia. Marine Le Pen, daughter of Holocaust denier Marie Le Pen, took her party to second place in France’s presidential election in April. And right-wing authoritarians Viktor Orban and Andrzej Duda already rule in Hungary and Poland, respectively. In other countries, parties with similar ideologies also continue to gain ground.

Setting aside any differences of degree they might have with Meloni and the Brothers of Italy, these right-wing leaders and others on both sides of the Atlantic rushed to offer her congratulations.

A spokesperson in Orban’s office told the press, “In these difficult times, we need more than ever friends who share a common vision.” Le Pen praised Meloni for “resisting the threats of an…arrogant European Union.” And Santiago Abascal, head of the far-right Vox party in Spain, said that Meloni has shown “the way for a proud and free Europe of sovereign nations.”

A member of the European Parliament representing the neo-Nazi Alternative for Germany party, Gunnar Beck, declared, “Something is definitely happening. From France and Italy, major European powers, to Sweden…a rejection of the manifestly failing pan-European orthodoxy is taking hold among our citizens.”

In the United States, some of the leading figures of the Trump wing of the Republican Party expressed their glee over Meloni’s win.

Rep. Marjorie Taylor Greene, R-Ga., hailed Meloni and posted a link to a video of a 2019 speech where the Italian complained of attacks on “national identity” and “religious identity,” vowing to defend “God, country, and family.”

Pointing to both Italy and Sweden, Rep. Lauren Boebert, R-Colo., tweeted, “The entire world is beginning to understand that the Woke Left does nothing but destroy.” Calling on GOP supporters to turn out in the mid-term elections, the Trump loyalist added, “The USA will fix our House and Senate!”

Texas Sen. Ted Cruz called Meloni’s win “spectacular,” while Louisiana Rep. Steve Scalise said that Europe is “leading the way in throwing out socialists.” He added, “We need to bring that kind of conservatism to the United States.”

Meloni is a well-known figure in the Republican Party and was already a hero of the fascist-leaning wing of the U.S. right. She has spoken at the Conservative Political Action Conference, was a guest of honor at the anti-LGBTQ evangelical World Congress of Families, and held strategy meetings with Trump advisor Steve Bannon.

In 2018, he described the Brothers of Italy as “one of the old fascist parties,” in a moment of honesty, but then said that if “you put a reasonable face on right-wing populism, you can get elected.”

Meloni’s international friends may be excited, but the Italian people should temper any expectations of improvement.

Marxist economist Michael Roberts predicts “none of Italian capital’s failures will be dealt with by the new right-wing government.” He believes it will do “no better than previous center-left, center-right, or ‘technocratic’ governments.” Rather, they are likely to make things worse, by continuing to follow the EU’s dictates while adopting their own “reactionary and anti-labor policies to sustain their coalition.”

The election results—and the international reaction to them by right-wing politicians—reflect the growing danger of fascist and fascist-influenced parties threatening democracy and relying on racism and economic deception to gain popular support.

The next electoral referendum on such politics will be the U.S. midterm elections on Nov. 8.

C.J. Atkins is the managing editor at People’s World. He holds a Ph.D. in political science from York University in Toronto and has a research and teaching background in political economy and the politics and ideas of the American left. In addition to his work at People’s World, C.J. currently serves as the Deputy Executive Director of ProudPolitics.