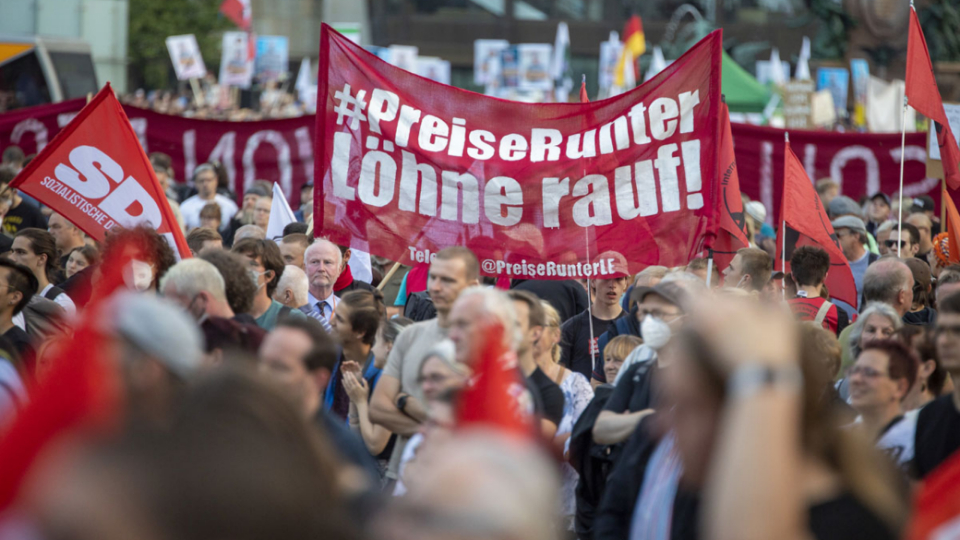 A banner at the protest in Leipzig reads: ‘Prices down, Wages up.’ | Martin Heinlein / Die Linke via Unsere Zeit

LEIPZIG, Germany—Around 5,000 in Leipzig and another 1,000 in Berlin last Monday took part in the first rallies of a campaign that’s being called the start of a “hot autumn” of resistance to Ukraine war-imposed hardships on German workers.

Demonstrators demanded caps on gas and electricity prices, the abolition of gas surcharges that fall on the working class, nationalization of the energy industry, and an end to the economic war the German government is waging with Russia.

Along with other EU countries, Germany has imposed economic sanctions on Russian energy sales in a bid to punish President Vladimir Putin for his invasion of Ukraine. But in a boomerang effect, the effort at fiscal warfare is hitting working people in Germany much harsher than it is the Russian state.

Inflation clocked in at 7.6% for Germany in summer 2022, a near-40-year high. At the core of the problem? Energy costs, which are up 38% according to official statistics. Before the war in Ukraine, Germany secured much of the natural gas that heats its homes and powers its industry from Russia. It had been that way for decades, even during the Cold War.

After the Russian military crossed the Ukrainian frontier in February, Germany and other countries set in motion a process of weaning themselves from Russian energy. The idea was that if the Russian economy could be strangled, then Putin would call back his tanks.

The whole affair backfired, though, with Russia finding new customers like India and China and thus raking in more money than ever thanks to higher global oil and gas prices.

Working people in Germany, meanwhile, have been left to pay the price for the faulty sanctions regime, and with autumn coming on fast in central Europe, the frustration is becoming more palpable. Temperatures are falling, and the level of anger is rising.

The Left Party (Die Linke) initiated the protest in Leipzig, where Sören Pellmann, a local member of the Bundestag (parliament), spoke of an “opening rally for the hot autumn.”

In Berlin, a left-wing alliance staged protests in front of the Green Party headquarters. While participating in Social Democratic Chancellor Olaf Scholz’s coalition government, the Greens have totally renounced their pacifist, anti-war roots and become the most hawkish voices among the ruling class.

Vice Chancellor Robert Habeck, who is also the economy and climate minister, and Foreign Minister Annalena Baerbock were the key actors in cabinet who pushed for Germany to overturn its long-standing policy of not exporting weapons abroad. Habeck and Baerbock, in particular, pressured Scholz to ship heavy offensive arms to Kiev.

Under the motto, “Enough is enough—protest instead of freezing; Heating, bread, and peace,” the Berlin protesters targeted the galloping inflation of gas and electricity prices. Taking Germany’s energy industry under public ownership and giving up on the sanctions charade were highlighted as the only realistic ways forward.

No kind words were heard for the Russian military’s attack on Ukraine, contrary to mainstream media claims that anti-war protesters are puppets for Putin. Instead, the fire was focused on the bungled response to the war by the powers-that-be in the Bundestag.

“We shouldn’t have to dress so warmly at home this winter, but the ladies and gentlemen in government tell us that we have to freeze for their wrong policy,” said Berlin rally announcer Uwe Hiksch, representing the Naturefriends Germany (Naturfreunde).

In Leipzig, the German Communist Party (DKP) and the Socialist German Workers Youth (SDAJ) provided a considerable chunk of the 5,000+ who marched. Co-chair of Die Linke’s parliamentary group, Amira Mohamed Ali, told the crowd she was demonstrating to “keep normal life affordable.”

Back in the capital, Angelika Teweleit from the Network for Militant Trade Unions, said the federal government has tried to contain the people’s anger with the inflation relief packages it has offered so far, such as limited household energy subsidies and public transit discounts.

But she argued the government is unwilling to do anything more substantial in the interests of the people, such as placing the energy companies under public control. It “prefers to protect corporate profits” instead.

Die Linke MP Sevim Dagdelen called for a planned natural gas surcharge to be terminated. The German government is planning an extra charge of 2.4 euro cents per kilowatt hour on households as a means of controlling demand.

Critics say the measure will make it more expensive for the public to heat their homes and cook their meals while padding the bottom lines of already-profitable private energy corporations. The surcharge, due to take effect in October, will act as a direct subsidy to utility companies who’ve had to pay for more expensive imported gas.

It’s a case of the people being forced to put up the cash for corporate welfare.

Die Linke co-chair Martin Schirdewan told demonstrators in Leipzig that they should not accept charges by the government or media that they are “dividing society” or “endangering democracy.”

Slogans including “NATO out of Ukraine” and “We are not freezing for your profits” were popular ones on the placards carried by protesters. Simplistic mainstream press coverage has latched on to these demands and equated the “hot autumn” protesters with the neo-Nazi Alternative for Germany (AfD) party, which opposes Germany’s participation in the Ukraine war.

Ferat Koçak, a Die Linke deputy in the Berlin Senate, declared, “There is no place for Nazis here,” and said it’s a common tactic of the capitalist ruling class to try to sow confusion among the people about the aims of the left and the extreme right.

As for the AfD and other far-right groups, they try to take advantage of these disinformation efforts to co-opt or hijack left-wing popular protest.

On the fringes of the rally in Berlin, anti-fascists prevented a group of supporters of the party “Die Basis” and the group “Freie Linke,” who had demonstrated several times together with neo-Nazis, from taking part in the rally.

In Leipzig, around 500 people took part in parallel to the left-wing rally in a meeting registered by the right-wing group “Freie Sachsen,” which the authorities in the immediate vicinity had approved.

Despite the Nazi distractions, Die Linke leader Gregor Gysi said he was pleased to see his party “finally able” to organize such events again after its recent divisions and poor election showing.

C.J. Atkins is the managing editor at People’s World. He holds a Ph.D. in political science from York University in Toronto and has a research and teaching background in political economy and the politics and ideas of the American left. In addition to his work at People’s World, C.J. currently serves as the Deputy Executive Director of ProudPolitics.

Thousands of people in Plauen in Germany against Olaf Scholz's policy and the explosion of energy and gas prices. They demand an end to sanctions on Russia and the reopening of the Nord Stream 2 gas pipeline. Demonstrations also in other German cities but EU media censors them. pic.twitter.com/jw1RSvcUq1

Thousands of people in Gera in Germany against Olaf Scholz's policy and the explosion of energy and gas prices. They demand an end to sanctions on Russia and the reopening of the Nord Stream 2 gas pipeline. Demonstrations also in other German cities but EU media censors them. pic.twitter.com/dmTMLY11jn

The Specter of Germany is Rising