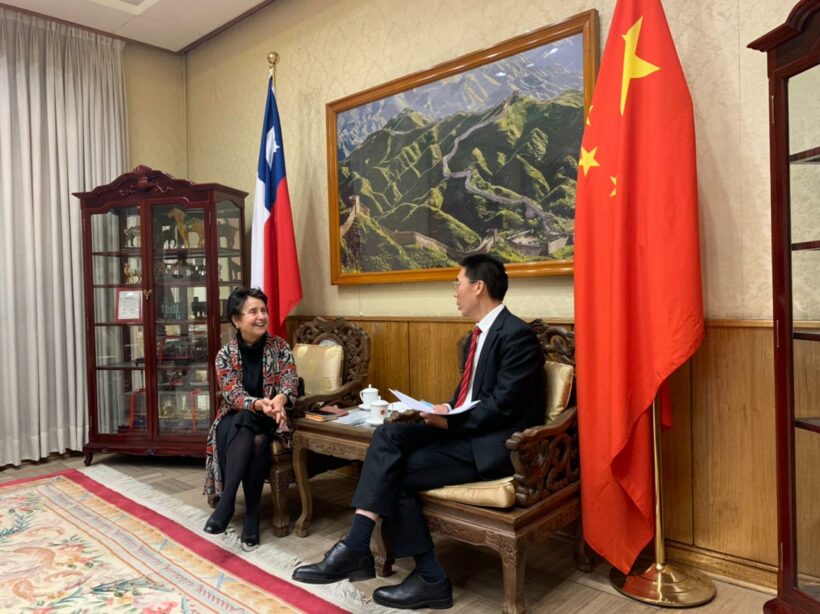 We had the pleasure of being able to talk in depth, with sufficient time and tranquillity, with Mr Niu Qingbao, Ambassador of China in Chile. Due to the length of our conversation, we are publishing the interview in three parts, making it easier for our audiences to read his words attentively and digest its contents, which for us were of great interest given the global context in which we find ourselves.

Pressenza: Mr. Ambassador, we live in a time of enormous and accelerated change, with crises that affect the most diverse ambits worldwide – from health to the environment, the economy, food distribution, not to mention armed conflicts – in which reciprocal understanding, multilateralism and cooperation between peoples are becoming increasingly important. Can you comment on how you see this moment and the role of your country in particular, as an articulator of policies of reciprocal collaboration?

Ambassador: Thank you, I think this is a very important question.

As you said, the world is not at peace today. The changes of the last century, never seen before, and the most devastating pandemic in a century, are intertwined and economic recovery is slow and difficult. Security challenges are growing and global development faces enormous setbacks.

All countries are calling for international equity and justice, and all peoples are yearning for development and cooperation.

In the face of such a world, in order to respond to countries’ yearnings for anti-pandemic struggle, development and security, China has in recent years formulated a series of policies and proposals on global governance.

The first is the joint construction of a global health community for all. Shortly after, in March 2020, Chinese President Xi Jinping formulated the concept of a global health community for all and proposed four measures aimed at the global anti-epidemic fight, namely, waging a resolute global war against Covid-19, carrying out efficient international corrective control, actively supporting the role of international organisations and strengthening international coordination in macroeconomic policy matters.

Later in May last year, at the Global Health Summit, President Xi Jinping shared five observations to boost international anti-epidemic collaboration, which are: persist in prioritising people and life, persist in adopting scientific measures for a coordinated and systematic response, persist in joining hands to promote solidarity and cooperation, persist in bridging the immunisation gap with an impartial and reasonable attitude, and fifth, persist in addressing both the problems and their causes to improve the governance system.

And I want to say that China will not only be proposing initiatives with proposals, but also making concrete contributions. In May 2020, at the 73rd session of the World Health Assembly, our President Xi Jinping announced that in the next two years China would offer international assistance of $200 billion, and once vaccines were available, we would offer them as public goods. And we have lived up to our words. By the end of 2021, China has shared anti-epidemic experiences and treatment proposals with 180 countries and more than 10 international and regional organisations. We have sent 37 medical teams to 34 countries. We have provided a large number of medical supplies to 150 countries and 14 international organisations. In addition, China has offered more than 2.1 billion doses of vaccines to 120 countries, making us the country that has offered the most vaccines abroad. For example, in the first half of last year, when vaccines were very scarce throughout the world, Sinovac vaccines were the only one that Chile had access to in large quantities, and this Sinovac vaccine allowed Chile to become one of the countries in the world with the highest vaccination rate and the fastest reactivation of its economic activities.

The Chinese-Chilean anti-epidemic collaboration is not only a highlight in bilateral pragmatic cooperation, but also an exemplary case for international anti-epidemic cooperation and has offered a vivid interpretation of the concept of a global health community for all.

The second initiative I would like to present to you is the Global Development Initiative. It was launched by our President Xi Jinping at the United Nations General Assembly in September last year. This initiative calls on the international community to refocus on the problem of development and pay attention to the special situation of developing countries and will be deepening cooperation in 8 serious ambits, which are poverty alleviation, food security, anti-epidemic and vaccines, financing for development, climate change and green development, industrialisation, digital economy and interconnectivity in the digital age.

In June this year, President Xi Jinping, while chairing the high-level dialogue on global development, formulated the joint creation of a global development paradigm marked by widespread benefits, balance, inclusiveness, coordination, win-win cooperation and common prosperity. And he made 4 more concrete proposals:

Second, we need to create together an international enabling environment for development. We need to build an open world economy and build a fairer and more reasonable global governance system and institutional environment.

Third, we need to cultivate together new driving forces for global development. It is imperative for us to promote scientific, technological and institutional innovation with a view to achieving more robust, greener and healthier global development.

The third initiative I present to you is the global security initiative. In April this year, at the annual conference of the Boao Forum for Asia, President Xi Jinping will be proposing this initiative as follows:

First, we need to persist in the vision of common, comprehensive, cooperative and sustainable security, and work together to defend global peace and security.

Second, persist in respecting the sovereignty and territorial integrity of all countries. Not to intervene in the internal affairs of other countries and to respect the development path and social system independently chosen by the people of each country.

Third, persist in abiding by the purposes and principles of the UN Charter, abandon the Cold War mentality, oppose unilateralism and discard group politics and bloc confrontation.

Fourth, persist in taking seriously the reasonable security concerns of all countries, adhere to the principle of the indivisibility of security, build a balanced, effective and sustainable security architecture, and reject the pursuit of our own security at the expense of those of other countries.

Fifth, persist in resolving disagreements and disputes between countries peacefully through dialogue and consultation, support all efforts for the peaceful resolution of crises, reject double standards and condemn the abuse of unilateral sanctions and long-arm jurisdiction.

Sixth, persist in defending security in both traditional and non-traditional areas, in joint response to regional disputes and global issues such as terrorism, climate change, cyber security and biosecurity.

The Chinese side believes that for emerging markets and large developing countries, it is necessary to assume responsibilities and inject an active, stable and constructive FORCE for the world. We must stand up for justice, fairness and unity and oppose hegemony, bullying and separation. We must speak out for fairness and justice, promote true multilateralism and defend the UN-centred international system and the international order based on international law. Abandon the Cold War mentality and the confrontation between blocs, reject the abuse of unilateral sanctions, in short, build the big family that is the Community of a shared future for mankind, instead of circles or blocs based on hegemonism.

The fourth initiative is the global food security cooperation initiative. After the outbreak of the Ukraine crisis, European countries impose sanctions on Russia unprecedented in scope and force, which have severely damaged the security of global industrial and supply chains. Food shortages and rising food prices are observed and developing countries, especially the least developed, are the hardest hit.

First, support the United Nations to play a key coordinating role. Support the work of the UN Food and Agriculture Organisation (FAO), the International Fund for Agricultural Development and the UN World Food Programme (WFP).

Third, provide favourable conditions for the smooth entry of Russian, Ukrainian and Belarusian agricultural products into the international market.

Fourth, the largest food producing and net exporting countries should release their own export potential, reduce trade and technical barriers, control the use of food-generated energy, in order to alleviate food shortages on the market.

Fifth, emergency measures taken by countries for food trade should be short-term, transparent, specific and appropriate, and in line with World Trade Organisation rules.

Sixth, support the Consultative Group on International Agricultural Research, and innovation and cooperation in agricultural science and technology between countries, and reduce restrictions on high-technology trade.

Eighth, to help developing countries strengthen their capacity to produce, store and reduce food losses in terms of capital, technology and markets.

Could you explain better to our audiences the concept to which your President Xi Jingping refers when he speaks of a Community of Shared Destinies and in what sense this can guide the possibilities of emerging from this crisis towards a better common future?

The Community of Shared Future for Humanity is one of the core concepts of Chinese diplomacy.

It was first formulated by our President Xi Jinping in March 2013. Since then, the President has explained it on multiple occasions and has enriched and developed the thought of Shared Future Communities for humanity.

This thought has had a strong echo in the international community and has been included many times in United Nations documents.

China believes that in the present time, in this era, different countries are linked, are interdependent, in a closer way than ever before. Many countries are not confined to the territory of one country, many challenges can no longer be faced by one country alone, and no country can close its doors and develop independently. Only when countries cooperate in solidarity can we effectively face the various challenges and risks, achieving both self-development and common development.

Based on this understanding of today’s world, President Xi Jinping will be proposing the concept of communities of shared future for mankind. He will be persisting in the common values of humanity, which include peace, development, equity, justice, democracy and freedom.

He also proposes to discard ideological prejudices and to do everything possible to make cooperation mechanisms more open and inclusive, with a look to ensure global peace and stability. In concrete terms, this vision encompasses the following five aspects:

Politically, in the face of counter-currents such as Cold War mentalities, the power politics of confrontation between blocs, we advocate mutual respect and consultation on an equal footing and follow a new path in inter-state relations, the path of dialogue rather than confrontation and partnership rather than alliance.

And on the economic front, in the face of lacklustre economic growth and de-globalisation, we advocate joint efforts to overcome difficulties, promote trade and investment liberalisation and facilitation, and push economic globalisation towards development in which openness, inclusiveness, broad-based benefits, balance and “win-win” are at a higher level.

And culturally, in the face of the so-called “clash of civilisations”, we advocate respecting the diversity of the world’s civilisations and putting exchanges between them above their estrangement, mutual learning above their conflicts, and the coexistence of all of them above the mentality that some are superior to others.

Ecologically, in the face of increasingly frequent extreme weather, we advocate persevering in treating the environment in a friendly way and tackling climate change through collaboration, in order to properly protect the Earth, the home on which human existence depends.

In my view, building a community of shared future for humanity is the joint construction of a world of lasting peace, of universal security, of common prosperity, of openness and inclusiveness, and a world that is clean and beautiful.

This is at the root of the yearnings of the various countries of the world seeking development and advancement, and it is also the greatest common dividing factor of all peoples seeking a better world.

I want to emphasise that the joint construction of a shared future for humanity requires the joint efforts of all the countries of the world. Large countries have their obligations and small countries also have their responsibilities, and both are indispensable.

Only when all countries act and strive together can this Community of Shared Future of humankind become a reality.