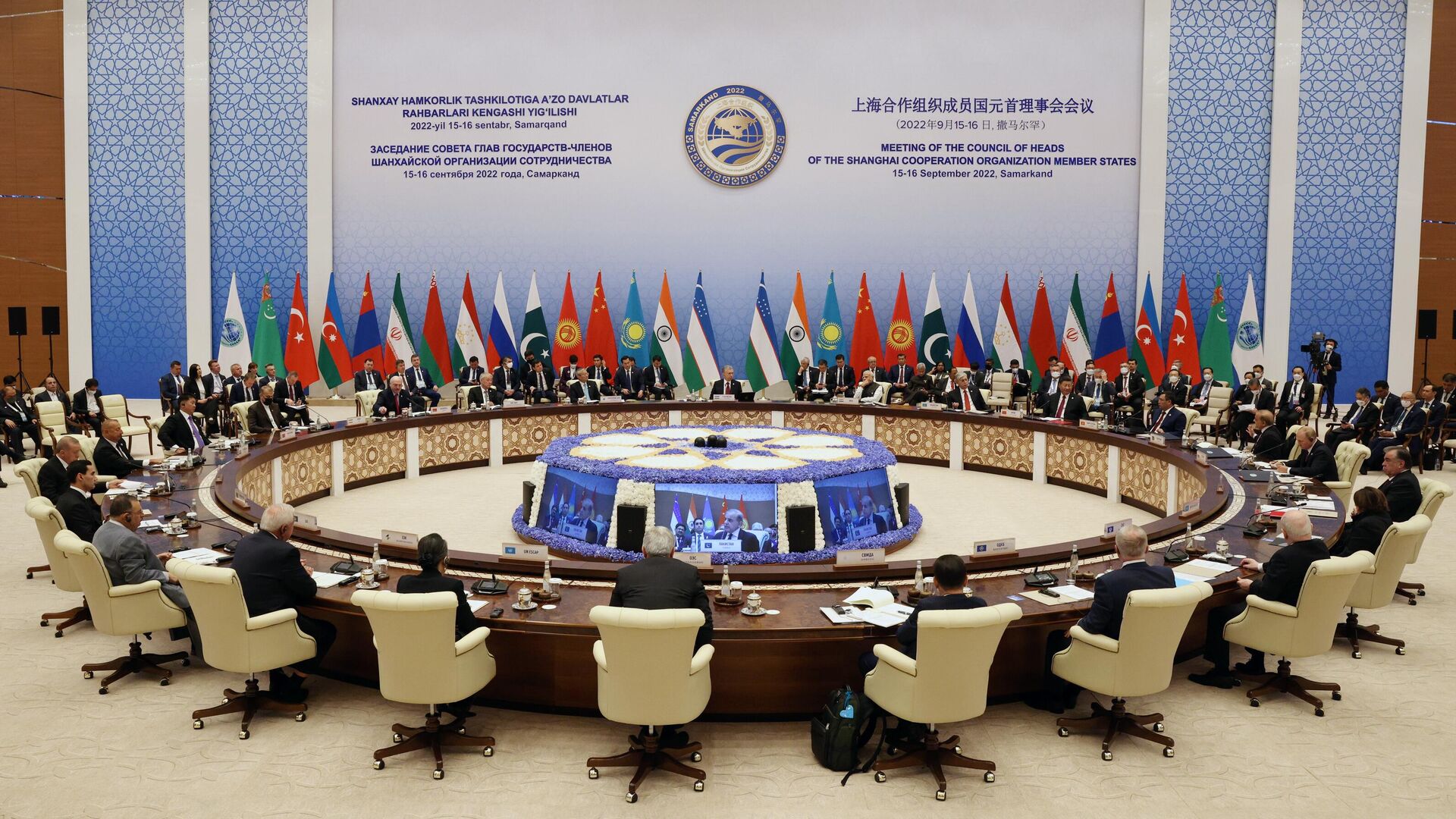 The SCO summit this week offers much welcome hope for a saner, more peaceful world.

The 22nd summit this week of the Shanghai Cooperation Organization explicitly and unreservedly promotes peaceful partnership and multilateralism – in stark contrast to the de facto Western worldview of hegemony and endless conflict.

The SCO summit, held on Thursday and Friday, saw the leaders of 15 nations convening in Uzbekistan, which is hosting the gathering this year. The venue in the ancient city of Samarkand is quite fitting. It is one of the oldest cities in Asia and was a key hub in the centuries-old Silk Roads for trade and human interaction.

But the conference is much more about looking to the present and future than the storied past. Uzbekistan’s President Shavkat Mirziyoyev hailed the event as “the birth of a new stage” in the SCO’s development to “launch a new inclusive dialogue” among nations.

Presidents Vladimir Putin of Russia and Xi Jinping of China were in attendance along with the leaders of India, Kazakhstan, Kyrgyzstan, Tajikistan, Pakistan and host nation Uzbekistan. These eight nations are the current core members of the SCO.

Iran is to gain full membership this year and other prospective members attending include Belarus, Turkey, Saudi Arabia, Qatar and the United Arab Emirates. Some 10 nations are in the queue to eventually join the organization. They include Afghanistan, Mongolia, Cambodia and Nepal. Armenia and Azerbaijan are also queued to join the SCO. There’s hope that their leaders might find some meeting of minds at the forum this week to quell the recent flare-up in violence between the two Caucasian neighbors.

The prospective membership of Afghanistan is poignant. The country is in dire economic distress after 20 years of U.S.-led NATO war. Last year, the United States finally abandoned the Central Asian country in defeat and disarray, having brought that nation to its knees from war and occupation. How appropriate that Afghanistan is now looking forward to reconstruction under the fraternal auspices of neighboring countries as part of the Shanghai Cooperation Council.

The SCO was founded in 2001 in Shanghai. Its headquarters are in the Chinese capital Beijing. Its origins are traced back to 1996 when Russia and China co-founded the Shanghai Five Group. When Uzbekistan joined in 2001, the forum then formally became the Shanghai Cooperation Organization.

Over the past two decades, the organization has grown steadily to now represent the world’s biggest regional bloc in terms of geographical coverage and population. With its current membership, the SCO represents 40 percent of the world’s population and about one-third of total global economic production. With the scheduled addition of new nations, it will have unrivaled prominence as an intergovernmental body.

The SCO is the most tangible expression of the emerging multipolar world. Its founding tenets are based on mutual dialogue and cooperation in respect of international law and inalienable national sovereignty. The organization proclaims peaceful partnership and coexistence in full conformity with the Charter of the United Nations that was founded in 1945 in the aftermath of World War Two.

Speaking at the summit this week, Russia’s President Putin said the SCO was “a forum for constructive and creative cooperation”. He pointed out that while member nations have different cultures and foreign policies, they are all united by a commitment to working together as equal partners respecting each other’s sovereignty and the principle of non-interference.

China’s President Xi remarked that the vision of the SCO was in harmony with his nation’s Belt and Road Initiative for international economic development. The BRI project is nearly 10 years old and has welded together over 100 nations in partnership for economic cooperation and development underpinned by massive Chinese commercial investment and trade. China is set to become the world’s number one economy, surpassing the United States.

The positive vision of the SCO stands in vivid contrast to the Western-style approach to international relations. Under the dubious leadership of the United States, the Western model is increasingly seen as a fetter on global development.

Indeed, one can go further and state that the U.S. and its Western partners are creating a world of unrelenting conflict, insecurity and regression. This is because Washington pursues the hegemonic ambition of a unipolar world dominated by the United States where the interests of America and its Western allies are the sole prerogative and priority.

This hegemonic mindset is in contradiction with the founding principles of the UN and international law. Of course, the United States and its European allies use charming rhetoric claiming virtuous intents. But the rosy rhetoric is contradicted by the patent practice of unilateral conduct and systematic flouting of international law. No nation is more at odds with the UN Charter than the United States which wantonly pursues war and violence to satisfy its interests. American (and European) self-regarding rhetoric is a disgusting, hypocritical deception for what is blatantly imperialist, criminal conduct.

President Putin noted at the SCO summit that U.S. efforts to impose a unipolar world “have taken an absolutely ugly form lately, which the overwhelming majority of nations of the planet find unacceptable.” He added that Russia, China and the SCO “stand together for a just, democratic, multipolar world based on international law and the central role of the United Nations, and not on some rules that somebody invented and attempts to impose on others without even explaining what they are.”

When the United States and its Western allies talk about “rules-based world order” what they really mean is an order subservient to their selfish economic and political interests. Any nation that does not conform to this diktat is liable to be sabotaged by military aggression or economic warfare, the latter euphemistically called “sanctions”.

The conflict in Ukraine, now past its 200-day mark, is an example of this hegemonic mentality in practice. The war in that country has been presaged by years of aggression by the U.S. and its NATO allies to destabilize Russia because Moscow has refused to appease Washington’s imperial interests. At a time of immense global economic stress, the U.S. and its NATO partners are funneling tens of billions of dollars in weapons into Ukraine in a reckless warmongering crusade. There is not the slightest pretense of trying to find a peaceful, diplomatic resolution to the conflict. Ukraine is being used and abused as a launchpad for U.S.-led war against Russia, a war that could blow up into catastrophic all-out World War Three.

The United States and its Western acolytes operate by continually creating Cold War relations and false demarcations of enmity between nations. The sociopathic mentality is: you are either with us (that is, subservient) or against us (that is, an enemy).

Russia’s problem with the U.S. is by no means unique to Russia. Dozens of other nations are on Washington’s hit list of economic warfare. Cuba stands out perhaps at the most egregious case, under the hammer of sanctions for over six decades for no other reason than it has a socialist government. Iran, Venezuela, North Korea, Syria, Nicaragua, and many more, are assaulted with economic sanctions simply for not complying with Washington’s writ for hegemony. All of this is completely illegal and in total violation of the UN Charter and international law. Yet the United States has the audacity to label others as “rogue”, “pariah” and “terror state”, when the fact is Washington is the world’s foremost criminal state.

Interference in other nations’ internal affairs is the standard modus operandi of the United States. This week the U.S. Senate brought forward a bill that will supply Taiwan with $6.5 billion in military weapons. The so-called Taiwan Policy Act 2022 is a direct assault on the UN-mandated One China Policy and China’s sovereignty over Taiwan. It is yet another violation of international law and in fact the United States’ own laws regarding treaty relations with China. How treacherous and rogue can you get?

The White House this week also warned China to “not do business with Russia”. It said that China would become “isolated” if it did.

Xi Jinping and Vladimir Putin can but only smile at the ludicrous Americans. The SCO summit is testimony that Russia and China are far from isolated. They are embracing nations that represent the majority of humankind. It is the power-crazy American rulers who are becoming isolated in their appalling death wish for the planet.

Again, the whole point of the U.S. conduct is to drive divisions, tensions, antagonism and ultimately war in order to project its interests. The American capitalist economy thrives on it. Without it, it is dying.

The United States is incapable of peaceful cooperation and coexistence because its imperialist interests are fundamentally anathema to such law-abiding conduct.

The bitter irony is that the European nations are now paying dearly by following American hegemony with their own self-inflicted destruction. Which proves the point that U.S. interests are singularly exclusive despite the duplicitous rhetoric about “allies”. Other nations are merely servants for that purpose, albeit given the false, cynical title of “allies”. Under woeful mis-leadership by European governments and a European Union bureaucracy that panders to Washington instead of the needs of their citizens, the European populations are being subjected to unprecedented economic deprivation. This winter will see extraordinary scenes of social misery from fuel shortages and crippling inflation.

Fortunately, though, the days of U.S. empire and its servile satellites are finished. The U.S. capitalist economy is in its death throes. American global power is sapping like an old man whose virile days are long gone. Uncle Sam may still have the vaguely held desires for control and domination but he is increasingly impotent to do anything about it. The pathetic European regimes haven’t caught on yet to the new reality and they are going down along with their decrepit American Uncle.

This is not to be complacent, however. We are living in an anxious time of historic change. American-led unipolarism is dying and desperate. That makes it extremely dangerous as the U.S.-led NATO insanity for war, war and more war attests.

That’s why the SCO summit this week offers much welcome hope for a saner, more peaceful world.

‘Samarkand Spirit’ to Be Driven by ‘Responsible Powers’