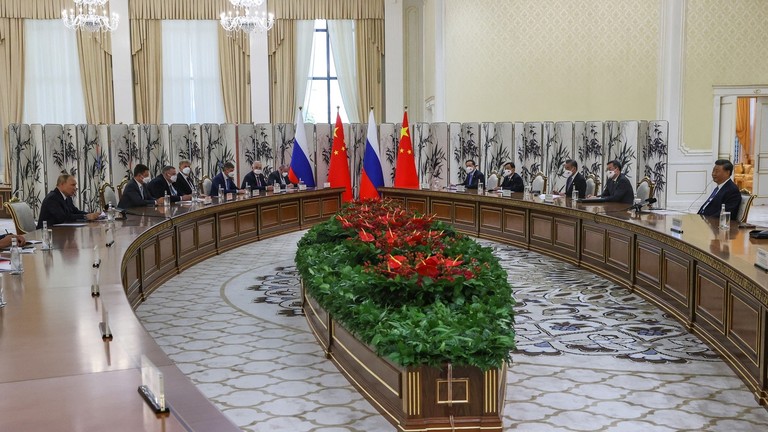 SCO Summit forges a path to a strong multipolar world

A second fraudulent argument in this Yale study is that Russia is checkmated by the U.S.-allied countries closing down the gas and oil pipelines that have been supplying those commodities to Russia’s biggest market for those commodities, which is the U.S.-allied European countries, and that the reason why Russia is checkmated on this matter is that Russia supposedly won’t be able fast enough to build new pipelines to sell those fuels elsewhere (since these EU nations had been Russia’s main customers for those fuels, and now won’t be buying it). The Yale study supposes that Europe can simply replace Russia’s pipelined gas by liquefied, containerized, shipped, and then re-gassified liquefied natural gas (LNG) from America and other suppliers, but ignores the crucial fact that pipelined gas is far cheaper, which is the reason why Europe was buying so much of it. It’s the main reason why fuel-prices are now soaring in Europe.

This war against Russia is a U.S.-and-allied war against Russia; and it is mainly a U.S. war against Russia, which is being waged by not only America (which profits from it) but by America’s European colonies or vassal-states, America’s “allies,” as they call these nations — which will be losing disastrously from it, especially because of their higher fuel-prices.

So: that 118-page study is designed to sucker fools (perhaps especially ones in Europe), by burying its implicit basic and false assumption that it is about “world markets” being customers of Russia’s “commodity exports,” instead of about the U.S.-allied European countries being customers of Russia’s gas and oil — and those countries are THE ONES that will NOW be paying VASTLY HIGHER prices for THOSE commodities, than previously, because they will now be buying LNG instead of (far cheaper) pipelined gas, and they will now be buying shipped oils instead of (likewise cheaper) pipelined oils.

An August 23 youtube by “Joe Blogs” headlines “RUSSIA Heading for ECONOMIC OBLIVION According to YALE MANAGEMENT Review on IMPACT OF SANCTIONS”, and pretends to analyze this Yale study, but fails to notice either of its big frauds; and, so, it comes up, at the end, just regurgitating the study’s conclusions, which (in the study’s own words) are:

Russia needs world markets as an outlet for its commodity exports far more than the world needs Russian commodity supplies. This is true not only across the entire commodity complex writ large, but on each specific commodity Russia exports as well. This is not to say that the transition away from Russian commodities has been painless for the west – far from it. As recent headlines bear out, the necessity of Europe cutting back on power usage while diversifying energy supply sources has created challenging political and economic ramifications. But the evidence clearly shows that the impact has been asymmetric: for every incremental pain inflicted on the west by pivoting away from Russian commodities, the damage wrought to Russia is far in excess. …

– Russia’s strategic positioning as a commodities exporter has irrevocably deteriorated, as it now deals from a position of weakness with the loss of its erstwhile main markets, and faces steep challenges executing a “pivot to Asia” with non-fungible exports such as piped gas – as we explain further in Section II of this paper.

– Despite some lingering leakiness, Russian imports have largely collapsed, and the country faces stark challenges securing crucial inputs, parts, and technology from hesitant trade partners, leading to widespread supply shortages within its domestic economy – as we explain further in Section III of this paper.

– Despite Putin’s delusions of self-sufficiency and import substitution, Russian domestic production has come to a complete standstill with no capacity to replace lost businesses, products and talent; the hollowing out of Russia’s domestic innovation and production base has led to soaring prices and consumer angst – as we explain further in Section IV of this paper.

– As a result of the business retreat, Russia has lost companies representing ~40% of its GDP, reversing nearly all of three decades’ worth of foreign investment and buttressing unprecedented simultaneous capital and population flight in a mass exodus of Russia’s economic base – as we explain further in Section V of this paper.

– Putin is resorting to patently unsustainable, dramatic fiscal and monetary intervention to smooth over these structural economic weaknesses, which has already sent his government budget into deficit for the first time in years and drained his foreign reserves even with high energy prices – and Kremlin finances are in much, much more dire straits than conventionally understood – as we explain further in Section VI of this paper.

– Russian domestic financial markets, as an indicator of both present conditions and future outlook, are the worst performing markets in the entire world this year despite strict capital controls, and have priced in sustained, persistent weakness within the economy with liquidity and credit contracting – in addition to Russia being substantively cut off from international financial markets, limiting its ability to tap into pools of capital needed for the revitalization of its crippled economy – as we explain further in Section VII of this paper.

– Looking ahead, there is no path out of economic oblivion for Russia as long as the allied countries remain unified in maintaining and increasing sanctions pressure against Russia, and

Defeatist headlines arguing that Russia’s economy has bounced back are simply not factual – the facts are that, by any metric and on any level, the Russian economy is reeling, and now is not the time to step on the brakes.

That “Joe Blogs” video has acquired, since its publication on August 23rd, up till September 17th, 610,057 views. So, this is an excellent example of how the U.S. regime and its hired agents propagandize the dumb majority to believe what not only isn’t so, but what is based on obviously false and misleading (even illogical) arguments.

Incidentally: the authors of that Yale study closed it by saying: “[1] One exception not shown on the chart is wheat – Russian exports represent ~20% of the global wheat market, but Russian wheat is primarily exported to EM [Emerging Market] countries such as Turkey and Egypt rather than to Europe.” This footnoted acknowledgement proves that they KNOW that basing their argument upon “world markets” instead of upon “Russia’s former European markets” (or some equivalent phrase, such as “EU markets”) — that is, the European countries whose economies will be crashing this winter because they do what the U.S./UK regime tells them to do — is fraudulent (intended to deceive), instead of being merely incompetent. They are saying here that Russia’s “wheat” doesn’t really matter, because it is going to poorer countries, not to the EU. So, they know the difference; the reason why their argument is based upon their ignoring that difference is simply in order to fool the suckers (such as “Joe’s Blogs” and its hundreds of thousands of viewers). After all, these are ‘democratic’ countries, and many of those people vote.

An important question that the Yale study also ignored is: How quickly can Russia and its Asian trading partners, who will henceforth be buying Russia’s pipelined fuels that the U.S./UK/EU regimes are now closing-off to EU countries, build the pipelines to reroute those fuels there (to Asia)? One sign of the answer to this is the following Wikipedia article, about one such pipeline, which is now in the process of being expanded:

In other words: Probably well before the EU’s coming economic crashes have ended, Russia will already have rerouted all or almost all of the gas and oil that it had been selling cheaply to Europe, to Asia instead. According to Asia Times, on 20 July 2022, “Power of Siberia 2 to divert Europe-bound gas to China”: the current Russia-China gas plan is for Russian gas-sales to China to rise ninefold within the coming year, to match what Germany — which had been Russia’s biggest gas-customer — had been buying.

The U.S./UK regime is treating both Ukrainians and the citizens of EU nations as being fools, to be exploited, instead of as individuals who have sovereign rights not to be lied-to, and exploited by that hegemoniacal regime.

Investigative historian Eric Zuesse’s new book, AMERICA’S EMPIRE OF EVIL: Hitler’s Posthumous Victory, and Why the Social Sciences Need to Change, is about how America took over the world after World War II in order to enslave it to U.S.-and-allied billionaires. Their cartels extract the world’s wealth by control of not only their ‘news’ media but the social ‘sciences’ — duping the public.

‘Samarkand Spirit’ to Be Driven by ‘Responsible Powers’