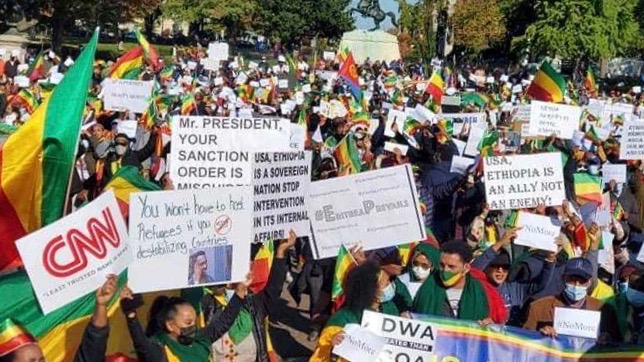 Ethiopians in the US rally in Washington D.C on November 9, 2021, demanding the US and its media to stop backing the TPLF. (Photo: http://www.waltainfo.com)

“Deploring the International community, in particular the UN, United States and the EU Member states, for their continued sympathy” towards the TPLF, the Ethiopian Advocacy Organizations Worldwide (EAOW) passed a resolution calling for peace on September 2

Ethiopian diaspora across the Western world is condemning the US and the EU for “emboldening” the Tigray People’s Liberation Front (TPLF) which resumed the war in the northern part of the country on August 24, ending the truce initiated by the federal government in March.

“Deploring the International community, in particular the UN, United States and the EU Member states, for their continued sympathy” towards the TPLF, the Ethiopian Advocacy Organizations Worldwide (EAOW) passed a resolution on Friday, September 2. The EAOW, a consortium of 18 organizations representing Ethiopian nationals in the US, Canada, UK, South Africa, and 11 European countries, condemned the TPLF’s alleged systematic large-scale forced conscriptions – including of child soldiers – in the northernmost State of Tigray.

Thousands have been fleeing Tigray, which is under the TPLF’s control, in order to escape forced conscription. However, hundreds have been caught and arrested by the TLPF, which is waging a war against the Ethiopian federal government. Tens of thousands of conscripts were sacrificed in human wave attacks launched by the TPLF, which had advanced south into the neighboring states of Amhara and Afar last year before being beaten back into Tigray. 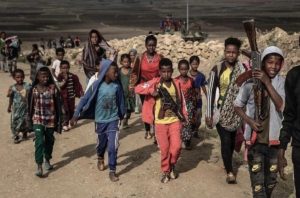 The resolution alleges that in order to conscript more soldiers for another round of invasion into Tigray’s neighboring States, the TPLF instituted a “one family one soldier” policy, as the war became increasingly unpopular in Tigray itself. The groups is also allegedly denying food aid to families unable or unwilling to contribute soldiers. This is when, according to the World Food Programme (WFP), 83% of Tigray’s population is food-insecure and over 60% of pregnant or lactating women were malnourished as of January.

Multiple reports indicate that on resuming the war on August 24, the TPLF looted 12 full fuel trucks from the WFP and tankers with 570,000 liters of fuel meant to facilitate food aid delivery. Hundreds of WFP trucks which entered Tigray to distribute food aid had already been seized by the TPLF and used to mobilize its troops during its offensive last year.

“This has only reaffirmed the view [that] the TPLF should not be playing a central role in the distribution of aid in Tigray,” Bisrat Aklilu, a board member of the American Ethiopian Public Affairs Committee (AEPAC), said in a letter to WFP’s Ethiopia country director Adrian van der Knaap.

He called on the WFP “to undertake an urgent review of its processes and to identify any misuse of aid by the TPLF.. Given the sheer number of Ethiopians in need in Tigray, Afar and Amhara regions, it would be an unforgivable scandal if WFP’s humanitarian assistance is ending up in the hands of rebel forces rather than the vulnerable communities who are suffering.”

“Deploring the deafening silence of the International Community in condemning such blatant violation of international law by TPLF,” the resolution urged the international community to force the TPLF to come to the negotiating table.

The federal government led by Prime Minister Abiy Ahmed has kept the door open for negotiations under the African Union (AU). AU’s High-Representative for the Horn of Africa, former Nigerian President Olusegun Obasanjo, had met with the government’s and TPLF’s leaders several times during the months of truce.

The EAOW resolution has called on the international community to “reiterate the peace process under the undisputed leadership” of the AU.

However, dismissing the AU as incompetent, the TPLF had effectively called for Western intervention only two days before resuming the war. It made particular references to the US and EU, whose envoys had met its leaders only weeks before it resumed the war.

“To date, the American Ethiopian community has been disappointed with the United States Government’s approach to the conflict, which has been perceived as more favorable to the TPLF terrorist group than the democratically elected government of Ethiopia,” AEPAC said in a press release.

AEPAC, which is a part of the EAOW and a signatory to its resolution, will be holding demonstrations and rallies on Tuesday, September 6, in Washington D.C and other cities in the US.

“The rallies will have a clear objective – to call on the US Government to support peace over violence in Ethiopia,” its statement said. “The only way to give peace a chance for the people of Ethiopia and ensure stability in [the] Horn of Africa is to end the TPLF’s violence. AEPAC will continue to engage US legislators and the administration to educate them on the facts on the ground and views of the diaspora.”

The “International Community” Is an Unreliable Broker in the Ethiopia Conflict