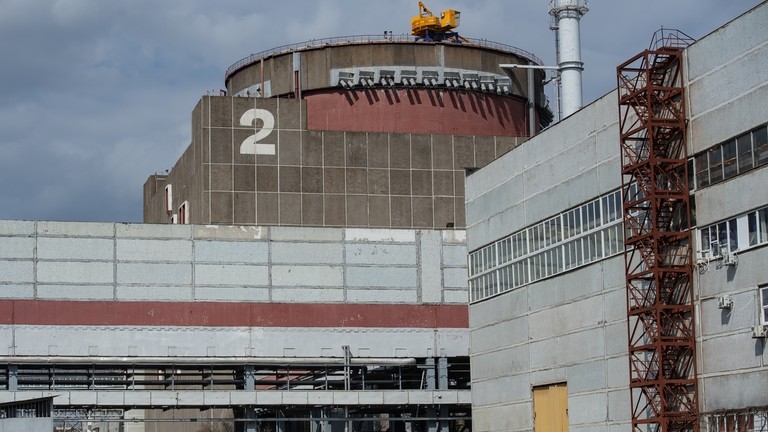 The Ukrainian military publicly admitted striking the area of the Zaporozhye nuclear power plant in an official General Staff briefing on Friday. Previously, Kiev had claimed that Russian forces used the plant as a military base; now it says all troops have relocated due to the visit by IAEA inspectors.

“In the areas of the settlements of Kherson and Energodar, accurate strikes by our troops destroyed three enemy artillery systems, as well as an ammunition depot and up to a company of personnel,” said the General Staff of the Armed Forces of Ukraine during the daily briefing.

The military also claimed that, due to the arrival of the IAEA inspection team, the Russian “occupiers removed all military equipment from the territory of the Zaporozhye nuclear power plant. About 100 units moved to the plant ‘Atom Energomash’ and the rest were dispersed in the nearest settlements.”

Energodar and the Zaporozhye facility have been under Russian control since early March, and functioned without problems until drone and artillery attacks began in July. Kiev has argued that the shelling was a false-flag operation by Moscow to make Ukraine look bad, but also that Russia was using the plant as a base for heavy artillery and equipment.

Moscow has consistently denied the accusations, saying that only lightly armed guards were deployed at the facility to ensure its security. On Friday, Russian Defense Minister Sergey Shoigu said Ukrainian claims that Moscow was using the facility to attack Ukrainian positions “with long-range artillery systems” were “blatant lies.”

“I state with confidence that we do not have heavy weapons at the territory of the nuclear power stations and in adjacent neighborhoods,” Shoigu said at a meeting in Moscow, adding that he hoped the IAEA inspectors would testify to this as well.

Shoigu also said there have been 29 attacks against the Zaporozhye facility since July 18, involving 120 artillery projectiles and 16 kamikaze drones.

The IAEA mission arrived at Europe’s largest nuclear power plant on Thursday, led by agency chief Rafael Grossi personally. Grossi said the IAEA planned to have a “continued presence” on the site. As the IAEA team was en route, a group of Ukrainian commandos used boats to land in Energodar and attempted to storm the power plant. Their goal, according to the Russian Defense Ministry, was to use the IAEA inspectors as “human shields.” However, Russian troops destroyed both the initial strike group and its reinforcements.

UN Thanks Russia for Keeping the Nuclear Team Safe

The UN is appreciates Russia’s efforts to safeguard the International Atomic Energy Agency (IAEA) team that came to inspect the Zaporozhye nuclear power plant, on Thursday.

That’s according to the secretary-general’s chief spokesman, who was speaking after the Russian Defense Ministry said it was “bewildered” at the lack of reaction to an alleged Ukrainian attempt to seize the facility by force.

“We are glad that the Russian Federation did what it needed to do to keep our inspectors safe,” Stephane Dujarric told reporters at a briefing in New York, when asked about Moscow’s comments. (https://t.me/asbmil/4632)

“As with any UN mission, it is the responsibility of those who control a certain area to keep the UN staff safe,” he added, also thanking the “security people” and “drivers” for the “tremendous job” of getting the IAEA team safely in and out of the Zaporozhye NPP.

The mission, led by IAEA director Rafael Grossi, was delayed at a Ukrainian checkpoint on Thursday morning. It eventually made its way to Russian-controlled Energodar and toured the facility for several hours, before heading back to Ukrainian-controlled territory.

Right before their visit, however, Ukrainian artillery targeted the city of Energodar and the Zaporozhye NPP itself, while a group of commandos crossed the Kakhovka Reservoir by boat and attempted to storm the facility, the Russian Defense Ministry said.

Both the initial assault group and the reinforcements that followed were wiped out by the National Guard and combat helicopters, the Russian military said. Their goal, according to Moscow, was to seize the Russian-held power plant and use the IAEA staff as “human shields” to maintain control over the facility.

Energodar and the Zaporozhye NPP have been under Russian control since early March. In August, the nuclear site was targeted by regular artillery and drone attacks, which Moscow and Kiev blamed on each other. Ukrainian officials also claimed that the Russian military was using the plant as a military base, stationing heavy weapons there. Moscow denied the accusations, saying that it only had lightly armed guards defending the facility.

Moscow has called for an IAEA visit to Zaporozhye, Europe’s largest nuclear power plant, since June – but Ukraine’s insistence that the mission must travel through Kiev to uphold Ukrainian sovereignty contributed to delaying the mission until this week.

The head of the International Atomic Energy Agency (IAEA) Rafael Grossi has confirmed that damage had been done to the Russian-held Zaporozhye nuclear power plant in Ukraine, but refrained from naming the guilty party.

“It’s obvious that… the physical integrity of the plant has been violated several times. By chance or by deliberation, we don’t have the elements to assess that, but this is the reality that we have to recognize,” Grossi told reporters after returning to Ukrainian-controlled territory on Friday.

“I worried, I worry and I will continue to worry about the plant until we have a situation that’s more stable, that’s more predictable,” he added.

Grossi, who headed the team of IAEA experts that arrived at the Zaporozhye nuclear power plant on Thursday, said that he “saw a lot” during the visit, personally inspecting some of the “key areas” at the facility, including emergency systems, diesel generators and control rooms.

The atomic agency was “not going anywhere” from the plant now, he assured reporters, reiterating that the UN nuclear watchdog plans to establish a permanent presence at the facility.

The official also said that some experts from his team will remain at the station until Sunday or Monday to “dig deeper” and collect more data for the report.

Russia said that Ukraine has shelled the Zaporozhye nuclear power plant and sent commandos to storm it on Thursday in a failed attempt to use the UN inspectors as “human shields.”

Grossi acknowledged that the security situation at the plant was “difficult” during his visit. “There were moments where fire was obvious – heavy machine gun, artillery, mortars,” he said, adding that on two or three occasions things got “very concerning” for the UN team.

Zaporozhye nuclear power plant has been under Russian control since March, but has continued to be operated by the Ukrainian staff. The IAEA chief has praised the “incredible degree of professionalism” of those employees, saying that he saw them “calm and moving.”

Moscow accused Kiev forces of repeatedly targeting the nuclear power plant, Europe’s largest, in August. It warned that those attacks could trigger a disaster that would eclipse the 1986 Chernobyl disaster, with radioactive material potentially reaching Poland, Slovakia, Romania, Moldova, Belarus, and even Germany.

Ukraine has claimed that Russian forces have turned the power plant into a military base and that they’ve been shelling the facility themselves to pin the blame on Kiev.

Russia has repeatedly denied those accusations and urged that international inspectors visit the site so that they could assess the situation for themselves.

Ukraine planned to use IAEA team as ‘human shields’

Kiev forces wanted to seize the Zaporozhye Nuclear Power Plant in a daring military raid and use the personnel of the UN nuclear watchdog as “human shields” to maintain control over the facility, the Russian Defense Ministry claimed on Thursday.

The botched raid came shortly before a team of experts with the International Atomic Energy Agency (IAEA) – including the organization’s head, Rafael Grossi – arrived at the plant for an inspection. According to the Russian military, multiple Ukrainian “saboteur groups” crossed the Kakhovka Reservoir in speedboats and barges near the plant early in the morning, but were intercepted and destroyed by Russian troops and National Guard forces.

“Obviously, if the operation of the Kiev regime to seize the station was a success, the head of the IAEA, [Rafael] Grossi, and the experts of the mission would become a ‘human shield’ for Ukrainian saboteurs to prevent any attempts to destroy them by the Russian armed forces,” the Russian MoD said in a statement.

The operation aimed at capturing the nuclear power plant appears to have been “planned in advance by Zelensky’s regime,” the Russian military suggested. Moreover, the delay in Grossi’s visit to the installation, originally planned for August 31, stemmed from the Ukrainians’ need for more time to get ready for that “military provocation,” it alleged.

The ultimate goal of the operation was seizing control of the plant, while the presence of the IAEA team would have allowed the “saboteurs” to not only take cover from any potential Russian actions, but also to cement the new “status quo,” the military said. The success of the operation would have likely been reinforced by a “new wave of loud statements from Washington and European capitals, calling upon Russia to establish a ‘demilitarized zone’ around the nuclear plant, with IAEA observers guarded by Ukrainian troops,” it asserted.

“In this regard, we fully understand the complete silence of all Western sponsors of the Zelensky regime, which de-facto confirms their tacit participation in the preparation of today’s provocation at the Zaporozhye plant,” the military concluded.