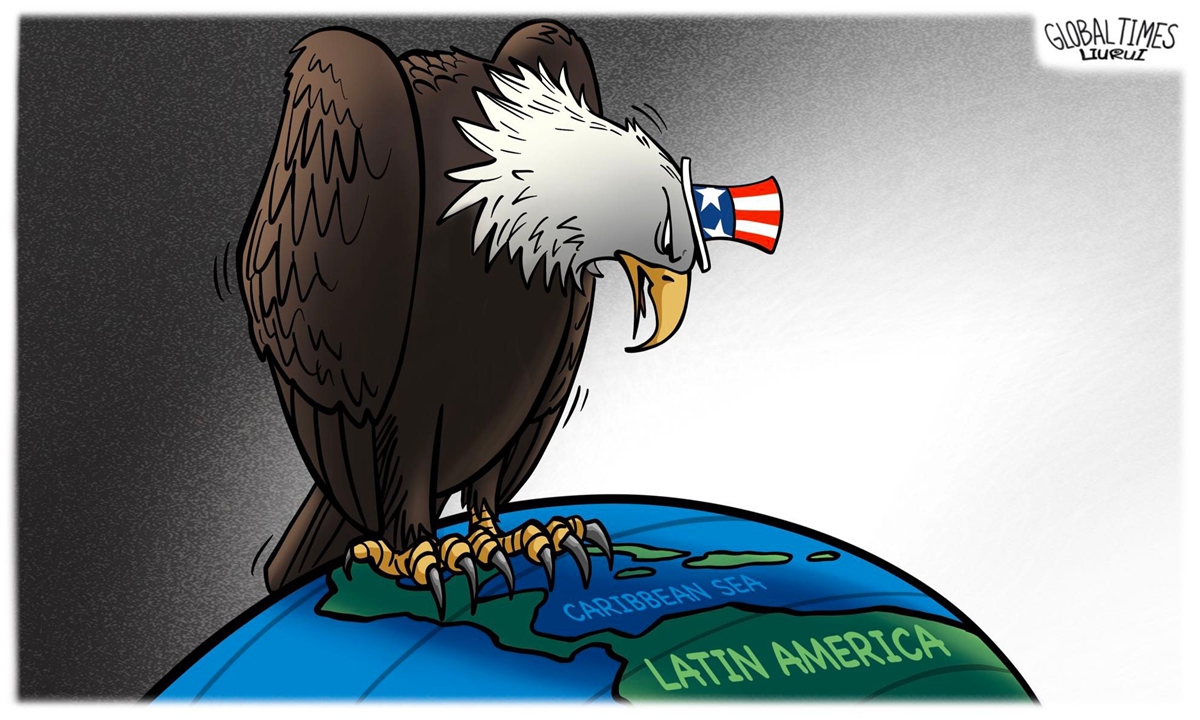 The disordered and brutal intentionality of the United States to control the political, economic, communicational, military and cultural orientations of Latin America is linked to the loss of its relevance in the region.

Last Thursday, the U.S. Ambassador to Argentina, Marc Stanley, arrogated to himself the right to give his opinion on the political agreements necessary to reach the 2023 Argentinian electoral process. The urgency of the Texan, with his interference character, was the response of the local opposition to the mobilization of the previous day, in which unions and social movements marched against the concentrated oligarchic interests. Stanley, as the primordial head of the neoliberal opposition, demanded immediate commitments before the popular sectors of the country decided to give another orientation to the future.

The imperative words of the envoy from Washington, referring that the political system must work “on agreements right now, and not wait for the elections of 2023″, were enunciated at the annual conference of the Council of the Americas, the small circle founded by David Rockefeller in 1963 to impose economic orientations to the different countries of Latin America and the Caribbean. Stanley’s sentence was interpreted as the key to the exclusion of Kirchnerism: lest the crisis should bring the maximum referent of the popular movement back to the forefront; Cristina Fernandez Kirchner.

A week ago, the President of Mexico, Andrés Manuel López Obrador (AMLO), accused the leader of the opposition in his country, Claudio Xavier González Guajardo, of having been illegally financed by the US embassy for a decade. The complaint before the Aztec courts was also sent to the diplomatic delegation, accompanied by a formal protest for the interference promoted by the State Department.

Gonzalez is the son of the former top Mexican executive of the Dallas-based Kimberly-Clark Corporation. Since AMLO was elected president, Gonzalez was postulated by the local neoliberal propaganda media as the top contender to dispute the presidency in the 2024 elections. He also formed the political current “Yes for Mexico”, endorsed from Washington while he directed the NGO Mexicans Against Corruption and Impunity, recently denounced for embezzlement, tax fraud, suppression of financial records (of international transfers received) and for the origin of such donations.

Between 2019 and 2020, the U.S. diplomatic delegation, settled at number 305 Paseo de la Reforma, granted the organization led by Claudio Xavier González a total of 25.7 million Mexican pesos, an amount equivalent to 1.3 million dollars. Other institutional donors to Mexicans Against Corruption were the National Endowment for Democracy (NED) and the Agency for International Development (known as USAID).

The former reports to the U.S. Congress and the latter to the State Department. Between 2018 and 2020, the NGO founded by González assigned him payments for 370,000 dollars, despite the fact that this amount exceeded the figures authorized by the current regulations for foundations of that type.

“The businessman Claudio González owes society an explanation – AMLO pointed out on August 11 in his usual morning press conference – (…) We already know that they received money from business organizations, from businessmen or influential people and also from the US embassy. But what they should say is ‘This is how we finance ourselves and with this money we pay lawyers to promote the injunctions against the works that the government is doing’”.

In the same vein, federal deputy Gerardo Fernández Noroña -member of the ruling party of the Fourth Transformation, 4T- was even more explicit in repudiating Washington’s interference and accusing the opposition of being functionaries for foreign interests. The leader of “Yes for Mexico” and Washington’s agencies -underlined pre-candidate Noroña- are working together to consolidate an alliance of all opposition parties (PRI, PAN and PRD), aimed at preventing the continuity of AMLO’s popular nationalist program in 2024.

“Instead of defending national interests, they defend foreign companies – denounced the President – (…) They are traitors to the homeland. Mexico is an independent country, it is not a colony of any foreign country, and the President of Mexico is not a puppet, he is not a puppet of any foreign government (…) I will assert Mexico’s independence and sovereignty. Even in the most important market in the world… the TEMEC. If having access to that market implies ceding sovereignty, we will not accept to surrender our independence… to any foreign government”.

AMLO’s words point clearly to the central problem that explains the underdevelopment and poverty in Latin America and the Caribbean: the interference model imposed by Washington. The State Department’s strategies to monitor, condition and guide the policies of the countries it considers part of its “backyard” include three different but articulated models:

-Direct intervention, through actions of diplomatic pressure and extortion and/or intrusion by federal agencies such as NED, USAID, DEA or CIA. This model includes the well-worn offer of military, legal or security training with which they co-opt bureaucratic and political cadres to integrate them into their staffs of influencers/domestic staffs.

The actions that respond to the Argentina model – in its meaning of articulation with security agencies – can be exemplified by the conformation of the Joint Task Forces that the former Minister of Security Patricia Bullrich created in collusion with her partners in the DEA. In 2015, three agents of this agency were residing in Argentina. A year later, thanks to the bonhomie of the then Minister of Security, another seven were added.

The model of direct intervention was evidenced last week, in all its crudeness, in Paraguay. Eight months before the presidential elections, the U.S. diplomatic delegation assumed the role of supreme elector by designating the current Vice President of Paraguay, Hugo Velázquez, as “significantly corrupt”. The Ambassador in Asuncion, Marc Ostfield, transmitted to the media the characterization decided by the Secretary of State, Marc Blinken.

Immediately, Velazquez decided to resign from the vice-presidency and from his candidacy for the presidency promoted by the Colorado Party, whose official name is the National Republican Association. A month before, on July 22, 2022, the same federal agency commanded by Blinken had labeled former Guarani President Horacio Cartes with the same sambenito, prohibiting him and his family from entering the United States. Cartes controls one of the internal lines within the coloradismo and local political analysts consider that the information used by the political attachés of the embassy was provided by sectors linked to the former president, friend and confidant of the former neoliberal president Mauricio Macri.

The model of direct interference is clearly observed in the last weeks in relation to Colombia. The sovereign decision of the new President Gustavo Petro to reestablish full diplomatic ties with Venezuela, appointing the experienced Armando Benedetti as ambassador in Caracas, merited the following comment by the State Department: “We call on democratic governments to respect democratic norms that have been violated by dictatorial regimes such as Maduro’s in Venezuela”. The other message from Washington was even more explicit: it downgraded the character of the diplomatic link with Colombia, by replacing a high profile ambassador, such as Philip S. Goldberg, with commercial attaché Francisco Palmieri.

The ambassador to Honduras is Laura F. Dogu. Prior to traveling to Central America, she served as Foreign Policy Advisor to the Army Chief of Staff. One of the first tasks promoted by her administration was the training of the Honduran Armed Forces on issues related to international humanitarian law and gender equity. Those in charge of teaching these academic contents were not specialized professors provided by NGOs or experienced university professors, but by uniformed officers of the Southern Command (USSOUTHCOM).

Honduran uniformed officers have been loyal followers of the Southern Command and often report to the US-occupied Soto Cano base. In 2009 there was a coup d’état against Manuel Zelaya, the husband of current President Xiomara Casto. On that occasion, the repression resulted in the murder of some twenty people, and so far the military officers involved have not been brought to justice. Their officers, now trained in human rights, became the support of the coup President Juan Orlando Hernandez, extradited a year ago for drug trafficking crimes.

At the beginning of this year, the State Department gave a donation of 1.3 million dollars to the government of Guillermo Lasso to train Ecuadorian military in demining techniques. A few months later -while military promotions were being debated- Ambassador Michael J. Fitzpatrick assured that there is a great “penetration of drug trafficking in Ecuador” and that “narco-generals” are proliferating in the Armed Forces. The same Fitzpatrick endorsed in 2019 the repression that produced 11 killed during the general strike.

Last July the Western Hemisphere Security Summit was held in Miami. Its motto was “Concord of the Americas”. The keynote address was delivered by the head of the Southern Command, General Laura J. Richardson, who pointed out that “of the 31 countries covered by the Southern Command, 21 have already signed up to China’s Belt and Road initiative, and this is very worrying”.

The diatribe against the sovereign ties of Latin American and Caribbean countries was prefaced by the article written by her frequent speechwriter, Leland Lazarus, who warned last March that “focusing predominantly on China’s economic and trade relationship with the region overlooks an alarming trend observed in other parts of the world, which could well be repeated in Latin America and the Caribbean: China often exploits seemingly innocuous commercial interests for military purposes.” The demonization was published in March in the influential Foreign Policy magazine.

Those who currently stand as two of the main disciplinarians of the fractious rulers south of the Rio Bravo are Senators Bob Menendez (Democrat from New Jersey) and Marco Rubio (Republican from Florida). Both have presented a project aimed at counteracting China’s “malign influence” in the region with a focus on cooperation in security and the fight against drug trafficking, an umbrella that has served in recent decades to deepen interference ties.

Along the same lines, the researcher of the Institute of Strategic Studies of the Army War College, Evan Ellis, expressed his concern before the Security and Defense Committee of the House of Representatives. In his presentation he defined as serious the growing expansion and threat generated by Vladimir Putin in Latin America. “Russia has demonstrated its intent and capability, albeit limited, to conduct military and other strategic activities directed against the United States and our partners in the Western Hemisphere.” In short, Washington arrogates to itself the definition of the foreign policy of the entire continent. America for the Americans.

The disordered and brutal intentionality to control the political, economic, communicational, military and cultural orientations of Latin America is directly linked to the relative loss of its relevance in the region. Michael Shifter and Bruno Binetti assume in a recent article that Washington will have to prepare itself for a new stage in which its officials will have to get used to interacting more horizontally with its neighbors. If not, they surmise, they will lose even more leverage. “They will have to learn to work and interact with a region that is less dependent on the United States, politically and economically, than at any other time.” That same perspective is assumed by Oliver Stuenkel in a recent article in the Council on Foreign Relations.

The most recalcitrant sectors, however, are reluctant to assume the new times: one of them is the crusader Ted Cruz, who repudiated last August 5 in Congress the triumph of Gustavo Petro. According to his words, a huge red stain of Marxist socialism is taking over the region, south of his native Texas.

The international chessboard is being reconfigured. But there are actors who cannot bear to live in a world where national sovereignties are increasingly relevant. The shadows, suggests a Chinese proverb, tend to take care of them.