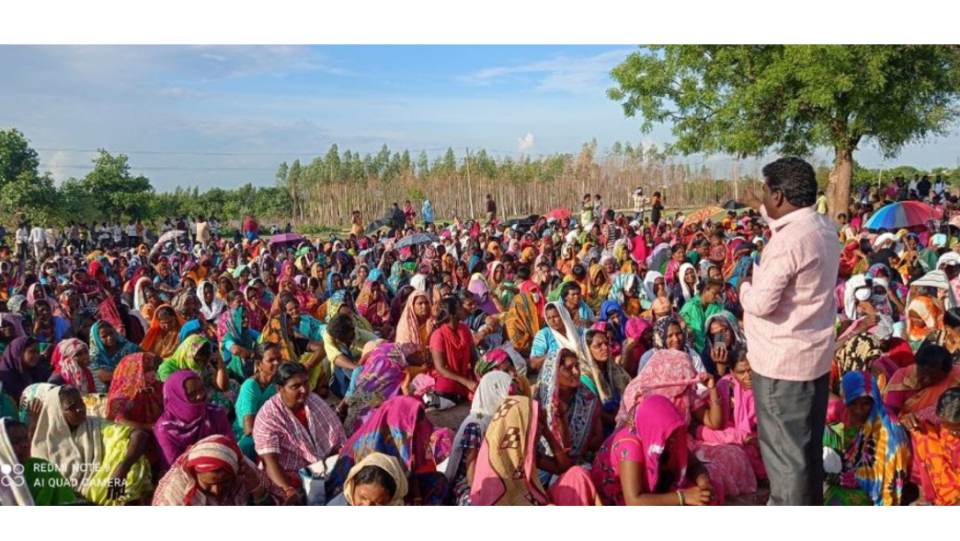 It all started with a survey. In April 2022, members of the Communist Party of India (Marxist), or CPI(M), went door to door in the town of Warangal in Telangana state. The party was already aware of challenges in the community but wanted to collect data before working on a plan of action.

Thirty-five teams of three to four CPI(M) members and supporters went to 45,000 homes and learned how people were suffering from a range of issues, such as the lack of pensions and subsidized food.

Many expressed anxieties around the absence of permanent housing, with a third saying that they were not homeowners and could not pay their rents. The government had promised to build two-bedroom apartments for the poor, but these promises evaporated. With inflation eating into their meager incomes and serious unemployment due to the collapse of the local bidi (cigarette) industry, desperation marked the people the communists met.

Many in the community expressed their willingness to fight for better living conditions, especially for more huts (gudisela poratam) to be built. In the words of one of the residents, “Whatever the consequences, even if we are beaten or killed, we will join this struggle.”

The CPI(M) formed committees in 30 wards of Jakkaloddi, a part of Warangal, and began to prepare people for the coming fight. The epicenter of the struggle was land that the government had taken in the late 1970s from an old aristocrat, Moinuddin Khadri, using the Land Ceiling Act of 1975. Rather than distributing this land to the landless, however, the government evicted farmers from part of it and then gave the land to leaders of the ruling Telugu Desam Party in 1989.

On May 25, 2022, 8,000 people marched to the Warangal Municipal Corporation and handed in 10,000 state housing applications. When they moved to occupy the vacant land, the police told them to stay away and prevented them from entering.

Despite this, the Jakkaloddi Struggle Committee, made up of those who had occupied the land, managed to organize the construction of 3,000 huts on the land. At 3 a.m. on June 20, the police arrived, set many of the huts alight while people slept, and beat the occupants as they emerged from their temporary homes. Over 400 people were arrested. The next day, local officials placed a sign outside the area: “This site is for the construction of a court complex.”

Neither this sign nor the brutality of the police could stop the people, who returned and continued to camp there for 60 days, G. Nagaiah, a state secretariat member of the CPI(M), told P. Ambedkar of Tricontinental Research Services (India). On June 26, they began to build 2,000 new huts. The police tried to stop them with more acts of violence, but the people fought back and forced them to retreat. Now, there are 4,600 huts in total.

The CPI(M)-led action was prompted by the state government’s failure to alleviate desperate land hunger in the region. The most recent government data shows that, between 2012 and 2017, there was a shortage of 18.8 million houses in urban India alone. Even this figure is inaccurate because it counts low-quality houses in highly congested city neighborhoods as adequate housing.

In November 2021, the World Bank announced the development of an Adequate Housing Index (AHI), which gives us a clearer picture. Their housing Gini figures show that, in India, two out of every three working-class families live in subpar housing.

The AHI looked at data from 64 of the poorer nations and found a housing deficit of 268 million units across these countries, which impacts 1.26 billion people. Furthermore, a quarter of the housing stock in the poorer nations is plainly inadequate.

With billions of people around the world unhoused or living in poor quality housing, and with no real plan to address this problem, it is unlikely that any poorer nation will meet the eleventh Sustainable Development Goal to “make cities and human settlements inclusive, safe, resilient, and sustainable.”

Land struggles in places such as Jakkaloddi resemble those led by Abahlali baseMjondolo, South Africa’s shack dweller movement, and Brazil’s Landless Workers’ Movement (MST). The crackdown and eviction of poor people from land occupations has become a regular occurrence across the globe. Similar attacks have been replicated in Guernica, Argentina, where 1,900 families were evicted on Oct. 29, 2020, and in Otodo-Gbame, Nigeria, where over 30,000 people were evicted between November 2016 and April 2017.

Such struggles are led by people who want to establish the material basis of living with dignity. In a recent dossier, South African researcher Yvonne Phyllis uses a isiXhosa saying to refer to the land: umhlaba wookhokho bethu, “the land of our ancestors.” This phrase, so common in most cultures, demands that land be seen as a shared inheritance, not as the property of one person. This expression also invokes, as Phyllis describes it, a recognition of the “unresolved question of injustice” inherited from “process[es] of colonial dispossession and deception that advanced the development of capitalism.”

These struggles throughout the Global South mirror those in Warangal, where the CPI(M) is leading thousands of people in the fight for housing, successfully securing a total of 50,000 homes in 2008 and continuing to the fight for adequate housing to this day.

The appetite to transcend the global housing crisis is spreading. The people of Berlin—some 3.6 million residents—held a referendum in 2021 over the growing impossibility of finding housing in the German capital. The referendum called for the state to buy back apartments owned by any real estate companies with more than 3,000 units in the city, which could impact 243,000 out of 1.5 million rental apartments. The referendum passed, although it is non-binding.

This—along with the growing confidence of people occupying vacant land and building their own homes—illustrates a new mood in the global movement for the right to housing. There is an increased understanding that housing must not be a financial asset used by the billionaire class for speculation or to shield their wealth from taxation. This sensibility is clear among organizations that fight for the right to housing such as Despejo Zero (Brazil) and Ndifuna Ukwazi (South Africa), among mass movements such as the MST and Abahlali, and among political parties such as the CPI(M) that organize people to transcend the housing crisis by occupying land.

These land occupations are filled with tension and joy, the perils of being beaten by the police alongside the promise of collective life. Part of this collective life is represented in songs, often written in groups and released anonymously.

We end with one such song by a state committee member of the people’s cultural group Praja Natya Madali, who goes by the pseudonym Sphoorti (meaning Inspiration) from a small book called Sphoorti Patalu (Inspiration Songs):

We will not move an inch
till we get land for our homes,
a morsel of food, and a strip of land.
We shall fight those who stop us.
On this land, the red flags we raised
stand ready for battle.

Birds nest in the branches.
Insects have homes in leaves.
We, who are born human,
thirst for a roof of our own,
for a patch of land for a home.

Drifting from place to place
in makeshift huts,
the shame of no address to our names.
Like leaves blowing in heavy winds,
with the pain of no place to call our own.

Well-healed bosses
steal thousands of acres
in the name of their children, birds, and animals.
For a little patch for which I ask,
the sticks beat me to the edge of death.

You, who have come to ask for our vote:
We demand food and shelter.
We are ready for battle till we get them.
We dare you to stop us.

Vijay Prashad is an Indian historian, editor, and journalist. He is the chief editor of LeftWord Books and the director of Tricontinental: Institute for Social Research. He is a senior non-resident fellow at Chongyang Institute for Financial Studies, Renmin University of China. He has written more than 20 books, including “The Darker Nations” and “The Poorer Nations.” His latest book is “Washington Bullets,” with an introduction by Evo Morales Ayma.