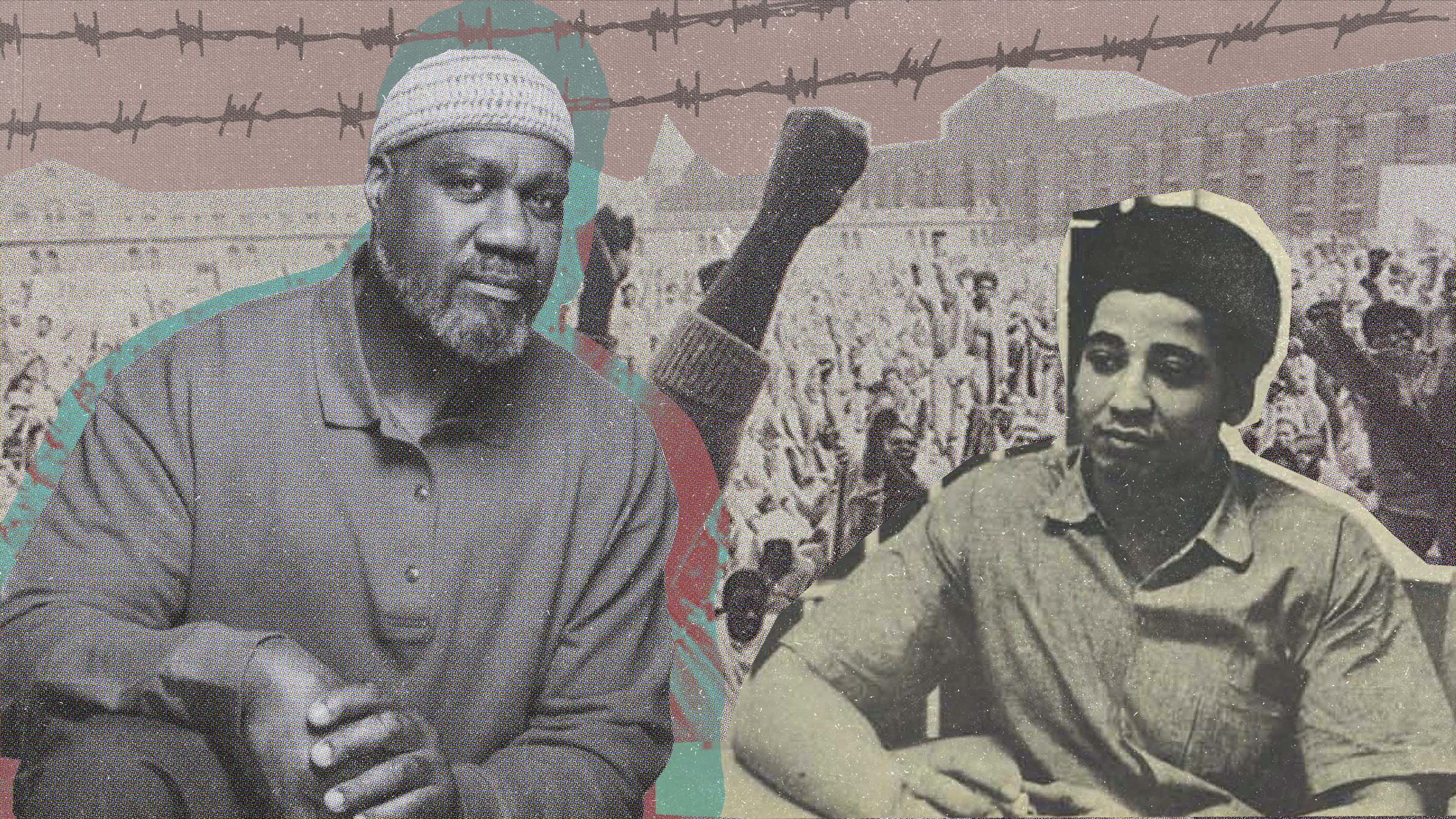 Jalil Muntaqim was first imprisoned in 1971, when he was only 19 years old, after being involved in revolutionary Black liberation groups the Black Panther Party (BPP) and the Black Liberation Army (BLA). Jalil spent 49 years behind bars before himself and his supporters won his freedom in October 2020.

Black August is a recognition of former political prisoners such as Jalil Muntaqim, who spent 49 years behind bars in US prisons

Revolutionary activists in the US, particularly those involved in struggles to free political prisoners and to end mass incarceration, celebrate and honor the tradition of Black August. According to these activists, Black August is a month to remember those who have died or been imprisoned in the fight for Black liberation in the United States, and a reminder that despite grave setbacks, this struggle lives on.

To illuminate the history and importance of this month, Peoples Dispatch spoke to former political prisoner Jalil Muntaqim. Muntaqim was first imprisoned in 1971, when he was only 19 years old, after being involved in revolutionary Black liberation groups the Black Panther Party (BPP) and the Black Liberation Army (BLA). Jalil spent 49 years behind bars before himself and his supporters won his freedom in October 2020.

Like other political prisoners, such as Mumia Abu-Jamal, Jalil was convicted of killing a police officer in a trial that supporters and activists maintain was unjust. And also like other political prisoners, his struggle against “white supremacy and capitalist imperialism”, in his words, did not end with his conviction. Muntaqim elaborated on his rich history and experience in the fight for Black liberation, both inside and outside prison walls.

“Black August began primarily in 1978 by prisoners in the San Quentin, California prison system,” Jalil told Peoples Dispatch. “[The prisoners] are known as the Black Guerilla Family (BGF). BGF came into existence…as a result of the murders of several black activists who were in prison, by prison guards.”

“[The activists] were being attacked by Aryan Brotherhood, white supremacists and were murdered by prison guards,” Jalil said. On January 13, 1970, respected Black militant and prisoner W.L. Nolen was murdered by a “notoriously racist” prison guard in what some view as an attack staged by prison authorities between racist neo-Nazi prisoners and Black prisoners. As a result, celebrated incarcerated revolutionary George Jackson and other prisoners founded the Black Guerrilla Family, a group which was closely allied with the Black Panther Party, and a critical part of the emerging Black Power movement behind prison walls.

“[T]he California prisoners began to organize themselves…in a group they called the Black Guerrilla Family. It was a self-defense organization, to defend themselves against white supremacist guards and other prisoners,” Jalil elaborated.

Not too long after Nolen’s death, on August 21, 1971, Jackson himself was assassinated by prison guards. “1971, Comrade George Jackson…allegedly made an effort to escape, and he was murdered in San Quentin prison. He was the field marshal for the Black Panther Party for Self Defense. He was a major writer, author and revolutionary inside the prison system,” said Jalil.

Shortly after Jackson’s death, Black California prisoners began the tradition of celebrating Black August, to honor those who fought and are fighting for Black freedom. August was chosen for the many historic moments in the Black liberation struggle that occurred during that month: the assassination of George Jackson, the indirect assassination of BGF leader Khatari Golden (August 1, 1978) by prison authorities, Nat Turner’s slave rebellion, the start of the Haitian revolution, the arrival of the first kidnapped African slaves in the Jamestown colony, as well as many other events.

Jalil Muntaqim, alongside others in the Black liberation struggle who have at one point been incarcerated, call themselves not only political prisoners, but prisoners of war. This is carefully chosen language.

“We are in opposition to a system of capitalist imperialism and racist exploitation, of white supremacy. And as a result, we are oftentimes targeted for annihilation, for termination. Or as it says in the COINTELPRO documents, for neutralization. And so by virtue of our being captured by what we consider to be our enemies, a system of governing that in and of itself is illegal, illegitimate…we identify ourselves, having been captured, as political prisoners, according to the Geneva Accords: Political prisoners and prisoners of war.”

The United States champions itself as a bastion of freedom, often juxtaposing itself with governments that it deems “undemocratic”. While the US will often parade the cause of political prisoners in nations that it is hostile towards, such as China or Venezuela, it refuses to recognize that it detains people for political reasons, and especially has never acknowledged the incarceration of any “prisoners of war” domestically. Jalil himself has worked to shatter this narrative, starting from when he was still behind prison walls.

“1981 I had the opportunity to raise a question with then-Ambassador to the United Nations, Andrew Young…I had [a] journalist ask him a question, ‘do political prisoners exist in the United States?’ He answered in the affirmative. ‘Yes, perhaps thousands.’ And for having answered that question truthfully, he was called to the carpet in the White House by Jimmy Carter, who was president at that time.” For his stunning admission that the US indeed had “thousands” of political prisoners, President Carter subsequently fired Andrew Young from his post.

According to Black revolutionaries like Jalil, the US government not only incarcerates political prisoners, but also is in an active state of war against Black people.

“We’re in a state of genocidal war…we identify those who have been captured by our enemy, as political prisoners. And some identify themselves as prisoners of war.”

Prison activists argue that the idea of the US engaging in a “genocidal war” is validated in the ways that the state represses political prisoners.

Much like a trophy of war, the gun that killed George Jackson is mounted on a wall display at the San Quentin prison “museum”, alongside a bronze plaque memorializing the name of the guard that shot the rifle.

The Black Guerrilla Family is currently classified as a gang by the California Department of Corrections and Rehabilitation (CDCR). In fact, it is the only Black “prison gang” that will lead to placement in solitary confinement for any prisoner thought to be “affiliated”. Solitary confinement is defined as torture by the United Nations.

Prisoners testify that CDCR represses political dissent by falsely classifying prisoners who struggle for Black liberation as members of BGF. Prisoner Mutope Duguma wrote to Solitary Watch in 2012, from behind bars in Corcoran State Prison solitary confinement (SHU), claiming he had been in solitary for over a decade as a result of being misclassified as BGF. “My cell has a concrete slab bed, the cell is white with a concrete brick slab for TV holding…No trees. No animals. No sun. No life. Just prisoners isolated from the world,” he wrote. Duguma describes himself as a “New Afrikan Nationalist Revolutionary Man”, New Afrikan being a political current that advocates for nationhood and self-determination for Black people.

Jalil’s organizing did not end with his release in 2020. In 2021, Jalil, alongside a coalition which Jericho is a part of, the Spirit of Mandela Coalition, organized an International Tribunal which convened on October 22 through 25. This Tribunal, held at the Shabazz Center, the same building in which Malcolm X was assassinated, convened international jurists to rule on whether or not the United States was guilty of human rights abuses against Black, Brown, and Indigenous people.

This jurists found the United States guilty on five counts, which, according to Spirit of Mandela, are:

This last charge has enormous historical implications. In 1951, Paul Robeson, W.E.B. Dubois, William Patterson, and others compiled a petition to the United Nations, charging the US with genocide against Black people. “We Charge Genocide” cited lynchings, legal discrimination and disenfranchisement, and police brutality against Black people, as well as other injustices, as being part of a United States genocide against Black people. The petition left a powerful legacy, with many around the world following in its footsteps (recently in May 2022 the Brazilian Black Coalition for Rights charged the Brazilian state with genocide).

However, due to the Cold War context, the UN did not acknowledge that it received the 1951 petition. The US also suppressed the petition, barring Robeson from obtaining a passport to deliver it and forcing Patterson to surrender his passport after presenting the document to the UN in Paris.

The 2021 tribunal was, according to Jalil, was the “first time in the history of the United States, that the United States has been found guilty by international jurists of the charge of genocide.” The victory was critically important, says Jalil, based on the fact that Malcolm X himself advocated for taking “the civil-rights struggle to a higher level — to the level of human rights.”

“As long as we keep our struggle confined within the parameters of civil rights, then anyone will be able to dictate the terms of that struggle,” Jalil said. “When we take our struggles into the international community…then it’s an international issue, and the United States has no way of controlling or dictating how to respond to it.”

Jalil is currently involved in building decolonization programs, which are modeled after Black Panther Party survival programs, providing direct aid as well as political education to the masses. “People are organizing themselves to try to alleviate some of the immediate issues like housing, education, homelessness, hunger, medical neglect, those kinds of things that we can address immediately when we organize ourselves,” Jalil said. These include the People’s Programs in Oakland, California and the People’s Liberation Program in Rochester, New York.

Jalil is also involved in building a “People’s Senate”, which, in his words, is “a tool in which we can organize ourselves and build a consensus amongst those who really, sincerely, authentically, genuinely want real change.”

“I’m talking about solutions, we know what the problem is, the problem is capitalist imperialism, white supremacy,” Jalil continued.

“We understand that the system in and of itself cannot be redeemed. It has to be destroyed.”

Political Prisoners in the United States, 2022

Mumia Abu-Jamal Remains the Voice of the Voiceless

Jalil Muntaqim: ‘I Am a Revolutionary and an Optimist’