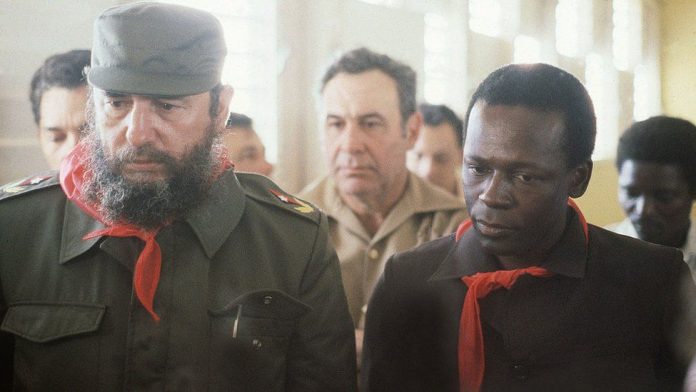 As far back in history as the period of enslavement of African people in North America, resistance and rebellion has been met with retaliatory repression from the ruling interests.

Freedom fighters such as Gabriel Prosser, Denmark Vessey, Nat Turner, Harriet Tubman, Sojourner Truth, among many others named and unknown, have been either brutally executed or left with no alternative other than to seek flight from oppression.

This same legacy of confinement, brutality and lynching continued into the post-slavery era of the 20th and 21st centuries. Between the 1880s and the Great Depression of the 1930s, thousands of African Americans were extra-judicially murdered by mobs of law-enforcement agents and vigilantes.

When the Civil Rights Movement erupted on a mass level during the 1950s with the Montgomery Bus Boycott (1955-56) and other actions, activists were subjected to unjustified arrests, sentencings and the bombing of homes and churches. During the 1960s, scores of Civil Rights workers were arrested, beaten, intimidated into leaving their home areas, wounded by gunfire and killed. People such as Medgar Evers (1963) and Herbert Lee (1961) of Mississippi were gunned down for their organizational work against racism and disenfranchisement.

In later years, key leaders such as Malcolm X (1965), Dr. Martin Luther King, Jr. (1968), Fred Hampton and Mark Clark (1969) were all assassinated in plots carried out by the Federal Bureau of Investigation (FBI) working in conjunction with police agencies and mercenaries. With the emergence of armed self-defense organizations such as the National Association for the Advancement of Colored People (NAACP) Monroe, North Carolina chapter led by Robert F. Williams, the Deacons for Defense (DOD) founded in Louisiana, the Lowndes County Freedom Organization (LCFO), the first independent political formation to utilize the black panther symbol in Alabama; the Black Panther Party for Self-Defense, Republic of New Africa (RNA), Black Liberation Army (BLA), among others, the Justice Department’s FBI and other intelligence and law-enforcement agencies heightened their disruptive tactics against the African American liberation struggle.

Assata and the BLA

Assata Shakur, born in 1947, joined the Black Panther Party in the New York City area while she was a college student in 1970. She had already been active in Black students organizing when she made contact with the BPP, which during 1970, maintained dozens of chapters across the United States as well as an International Section in Algiers, Algeria in North Africa.

Many militant youths in urban areas joined and were influenced by the BPP during 1967-1970 as the level of repression coordinated by the federal government accelerated. A split within the Party leadership during early 1971 over tactics, led to the activation of the Black Liberation Army (BLA) which advocated armed struggle as a defensive measure in response to the widespread harassment and imprisonment of BPP members.

The BLA and the International Black Panther Party with its newspaper entitled “Right On”, supported the International Section in the 1971 split. Panther leaders such as Eldridge and Kathleen Cleaver, Field Marshal Don Cox, Connie Matthews, etc. had maintained the Algiers office since the August 1969 Pan-African Cultural Festival, when the Algerian government recognized the BPP as the official representatives of the African American people. The International Section hosted an Afro American Cultural Center during the festival and would later move into an official diplomatic residence which had been occupied by revolutionaries from Vietnam.

Panthers inside the U.S. who were aligned with the BLA continued to work in their underground structures. There were several armed engagements with law-enforcement agents between 1971-1973.

On May 2, 1973, an encounter between Assata Shakur, Zayd Malik Shakur and Sundiata Acoli resulted in the wounding and capturing of Acoli and Assata Shakur and the death of Zayd. One New Jersey State Trooper was killed in what was described as a routine traffic stop on the Turnpike.

This incident came amid enormous propaganda within the U.S. corporate and government-controlled media that characterized the BLA as a violent criminal gang bent on the killing of police officers. However, almost no mention was made by the mainstream press outlets related to the systematic repression under which the BPP and other revolutionary organizations were subjected to by the federal government.

In an open letter from Assata which coincided with the National Jericho March in Washington, D.C. in 1998, that demanded a general amnesty for all U.S. political prisoners, she articulates her position saying: “Neither Sundiata Acoli nor I ever received a fair trial. We were both convicted in the news media way before our trials. No news media was ever permitted to interview us, although the New Jersey police and the FBI fed stories to the press on a daily basis. In 1977, I was convicted by an all- white jury and sentenced to life plus 33 years in prison. In 1979, fearing that I would be murdered in prison, and knowing that I would never receive any justice, I was liberated from prison, aided by committed comrades who understood the depths of the injustices in my case, and who were also extremely fearful for my life.” (https://www.afrocubaweb.com/assata2.htm#Open%20letter)

By late 1981, other BLA cadres and their supporters were the subject of a nationwide dragnet by the FBI. Dr. Mutulu Shakur, an acupuncture specialist, was targeted by the U.S. government claiming he was the leader of the BLA and other revolutionary organizations operating in the New York/ New Jersey area. Scores of activists were subjected to surveillance, grand jury questioning, jailing and imprisonment. Dr. Shakur went underground in 1980 after establishing an acupuncture clinic in Harlem. Today, Dr. Shakur, having been unjustly held in prison since 1986, is suffering from bone marrow cancer and has been given only a few months to live. A campaign to win compassionate release has been underway for several months.

Assata Shakur and the Cuban Revolution

After being liberated from a maximum security prison in New Jersey, Assata lived underground for five years. In 1984, she was granted political asylum by the socialist Republic of Cuba then under the leadership of President Fidel Castro.

Cuban revolutionaries within the July 26th Movement had won genuine liberation for the Caribbean island-nation on January 1, 1959. The revolutionary government immediately outlawed racism and national discrimination while committing themselves to assisting the national liberation struggles in Africa.

In 1961, Robert F. Williams and Mabel Williams were granted refuge in Cuba where they fled after being subjected to threats of arrest and prosecution in North Carolina. Williams was given a program called Radio Free Dixie which broadcast via shortwave deep into the U.S.

Later other political refugees were welcomed by the Cuban Revolution during the 1960s and 1970s. When Assata arrived in Cuba in 1984, there were thousands of Internationalist volunteers operating in the Southern African state of Angola in efforts to secure the revolutionary government of the Popular Movement for the Liberation of Angola (MPLA) under fierce attack by the racist apartheid South African Defense Forces (SADF) and the U.S. Central Intelligence Agency (CIA). By 1988, the apartheid military forces had been driven out of Angola and the-then racist government based in Pretoria soon agreed to withdraw from neighboring Namibia where they had attempted to suppress the Southwest Africa People’s Organization (SWAPO), the sole legitimate voice of the Namibian people.

The Republic of Namibia was declared independent on March 21, 1990, just weeks after the release of African National Congress (ANC) of South Africa political prisoners such as future President Nelson Mandela. The apartheid regime would eventually fall after the first democratic nonracial elections of April 1994. Since this time period, the MPLA of Angola, SWAPO of Namibia and the ANC of South Africa have remained in power.

Since the beginning of the Cuban Revolution, the socialist government has continued to exemplify international solidarity with oppressed and working people around the world. Hundreds of students from African American and Latin American communities in the U.S. have studied medicine in the Republic of Cuba at the Latin American School of Medicine (ELAM) through full scholarships provided by the Communist Party government.

These developments since 1959 have endeared the Cuban Revolution to revolutionaries in the U.S., Africa, Latin America and other geo-political regions. The political biography of Assata Shakur provides a clear reflection of the interrelationship of revolutionary movements from the U.S., Latin America, the African continent and throughout the globe.