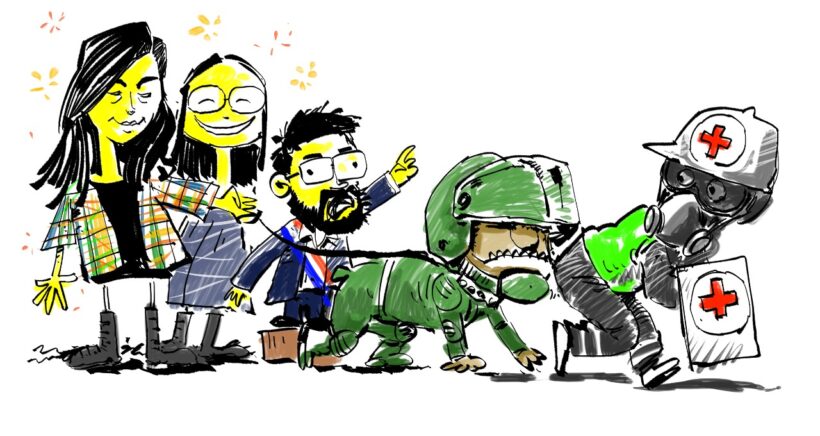 The President of Chile, Gabriel Boric, during his campaign promised to reform the country’s uniformed police. This promise was well received by the citizenry, as a response to the discrediting of the institution, not only the historical one, due to its role during the military dictatorship, but also the recent one, derived from the multiple cases of corruption and embezzlement in which it was involved, along with its performance during the social outburst in 2019 that left dead, maimed and seriously injured. The performance of Carabineros de Chile, continues to be questioned as from 2019 until today, there continue to be allegations of violations of Human Rights and international protocols for medical assistance to people in adverse situations. During the demonstrations that are still taking place, they persecute both demonstrators, including minors, and health volunteers who assist victims of repression during the days of protest.

During the afternoon of Friday 12 August, a dozen health brigades that work voluntarily in the “ground zero” of Santiago and its surroundings gathered at a press point to denounce the police persecution of which they are victims on a weekly basis. The brigadistas denounced that they are constantly gassed with pepper spray and tear gas, doused with water from the water cannon, sometimes with chemicals, beaten, persecuted and even arrested, just for the fact of providing health care. The statements opened with the words: “We, the Health Brigades present here, are gathered to denounce and repudiate the acts of violence and persecution of which we have been and continue to be victims on the part of the repressive forces of the Chilean state. From the beginning of the outbreak and in virtue of the serious violations of human rights that began to become evident, we voluntarily convened ourselves and with precarious resources we began to serve demonstrators and passers-by who were attacked and injured in various ways”.

The Dignity Brigade, one of the brigades present, indicated: “During these almost three years we have assisted demonstrators who have suffered from burns from the chemicals of the water cannon to the physical and psychological ravages of eye trauma. We have been part of the rescue of Antony, a young man who was thrown into the Mapocho River by carabineros, and the care of Denisse Cortez, who for a long time was obstructed by the police, as well as Francisca Sandoval, the murdered journalist, before her transfer to hospital”. The emblematic cases that this brigade mentions, cases of life or death, as well as cases that are unfortunately daily occurrences, are a demonstration that health teams are agents of protection for people who use their legitimate right to protest, mitigating for them the ravages left by the brutal repression perpetrated by Carabineros de Chile.

The Dignity Brigade, which is the only one with a permanent health point, has previously denounced the invasion of their place of care, the arrival of police surrounding the place and even an intentionality fire in March 2020 (Pressenza, 2020), when while providing care to three patients, the police threw tear gas bombs directly into the tent that housed them causing the fire to start and spread. The Resistance Brigade referred to the Geneva Treaty, which specifies that medical facilities cannot be attacked with any weapons, including but not limited to chemicals or explosives, nor can they suffer destruction of their property, and that access to healthcare cannot be restricted.

Brigade Rescue B denounced: “Today, once again, the crude repression is present – today we are being prosecuted and punished for holding a helmet with a cross and a shield”, referring to the uniform they wear, which with the red cross shows that they provide emergency medical care. Despite the aforementioned international protocol that guarantees the protection of those who provide assistance to victims of violence, this brigade’s reflection is accurate. One may ask, what are the police after when they persecute the health brigades? They are after those who guarantee, within their means, the integrity of the demonstrators, interposing themselves between the violence that the state perpetuates through its institutions and the target of this violence.

After the change of government, repression has increased again, with the level of trauma and injuries to demonstrators and attacks on health teams increasing week by week. The Newen Mapuche Brigade agrees: “the harassment and aggressions suffered are on the increase”. During the government of Sebastián Piñera, several representatives of Boric’s government, including members of the current cabinet, publicly expressed their solidarity with the Health Brigades while they were in the opposition. Today in their new positions they have supported the police forces and have made no mention of the human rights violations that continue to be carried out in Plaza Dignidad and other places.

The support that Boric and his cabinet have given to the police has legitimised their actions and allowed the institution to continue with its usual procedures. Without going any further, today, after the brigadistas’ press point was over, the police were seen throwing water and gas at them, pushing and hitting them, so that several of them had to be attended to by other health volunteers, who reported a large number of traumas caused by blows from the carabineros. According to the aforementioned Geneva Treaty, governments have an obligation to prosecute those who violate international treaties.

The brigades concluded by demanding that all these issues be given real attention by the different competent institutions, that the right to social protest, life, and the integrity of demonstrators and volunteers be respected, also indicating that their commitment will not be intimidated, stressing: “As long as there is someone fighting in the streets, we will continue as health brigades to offer our committed and supportive attention”.