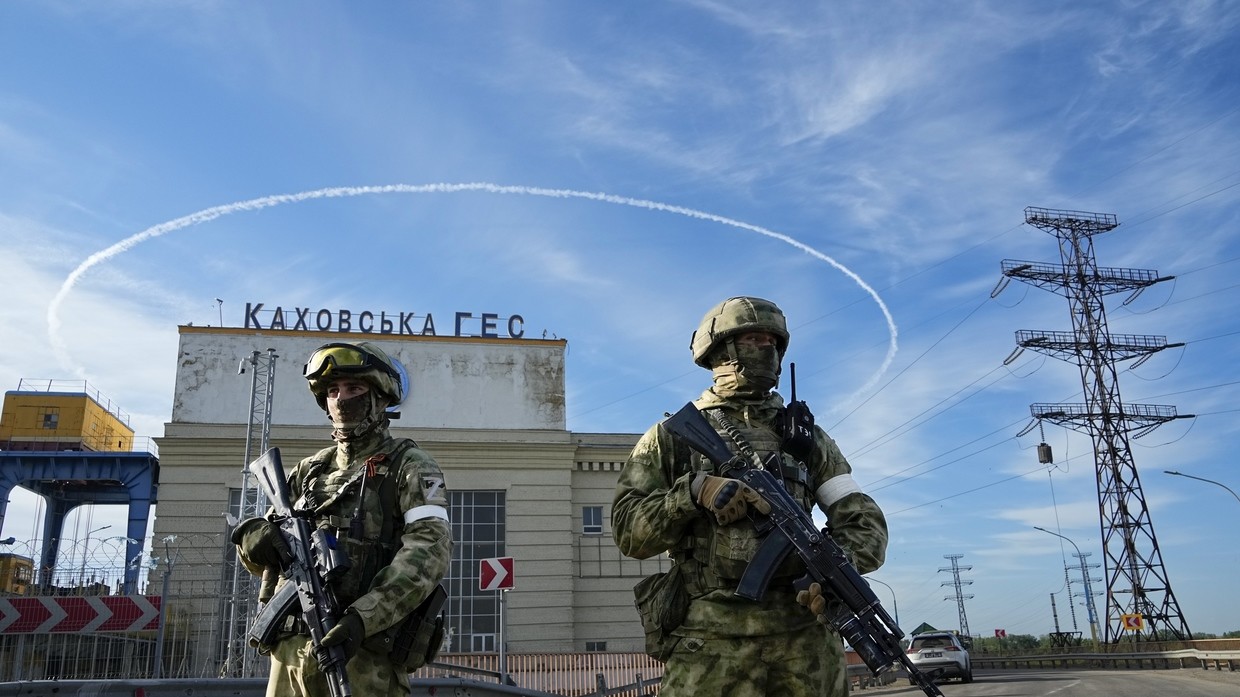 The US secretary of state hoped to make Russia look like a ‘nuclear terrorist’. Instead, he implicated himself

Even as UN Secretary-General António Guterres addressed survivors of the World War Two US atomic bomb attack on Hiroshima, halfway around the world, the armed forces of Ukraine seemed hellbent on unleashing a modern-day nuclear holocaust on Europe by firing artillery rockets at the Zaporozhye power plant.

This week’s assault, which damaged safety equipment and disrupted power to the facility, the continent’s largest, was characterized by Guterres as “suicidal.”

Kiev was quick to blame Russia for the attacks, accusing Moscow of conducting “nuclear terrorism,” and calling for the international community to send in a delegation of “international peacekeepers” to “completely demilitarize the territory.”

The Zaporozhye nuclear facility has been under the physical control of Russia since its forces occupied the site back in March. Since then, the plant has been operated by Ukrainian technicians working under the supervision of Russian atomic energy experts. The facility contains six nuclear reactors which, before the start of the military operation, generated approximately one-fifth of Ukraine’s electricity. Three of these reactors ceased operation after the Russians took control the site, and another one was forced to shut down after the facility was shelled on August 5. The two remaining reactors were likewise compelled to reduce their output to half as a safety precaution.

Ukraine’s ambassador to the International Atomic Energy Agency (IAEA), Yevhenii Tsymbaliuk, declared that Russian forces were attempting to cause electricity blackouts in southern Ukraine by shelling the plant. The Ukrainian state nuclear agency, Energoatom, has accused the Russian military of placing explosives throughout the Zaporozhye nuclear plant, which would be detonated in the event of a Ukrainian counterattack which threatened to capture the facility. The Ukrainian military has also accused Russia of placing military equipment, including ammunition, in buildings located near the nuclear reactors.

The only problem with the Ukrainian narrative is that, simply put, none of it is true. The August 5 attack on the Zaporozhye nuclear facility was carried out by artillery rockets whose impact characteristics point clearly to having originated from Ukrainian controlled territory. Moreover, Russian air defense and counter-battery radars situated in the vicinity of the plant would have detected the ballistic trajectory of the incoming rockets, providing unimpeachable evidence of the origin of the attack. So, too, would have US and NATO intelligence collection platforms operating over and around Ukraine. And, given the propaganda victory that could be achieved by releasing such evidence, one can rest assured that the US would very much take full advantage of any scenario which would reproduce the release of U-2 imagery during the Cuban missile crisis, or the release of the audio tapes of the Soviet fighter pilot downing KAL 007.

This, of course, won’t happen. And given the reality that Russia is engaged in the active defense of the Zaporozhye facility, it is unlikely that it would give away important intelligence about its radar capabilities just to score cheap public relation points. Russia has long been reticent about engaging in cheap propaganda, preferring to let its performance on the battlefield do its speaking for it.

Not so the United States and Ukraine, which have a track record of collaboration when it comes to disseminating information designed to undermine the Russian narrative and “get into the mind” of Russian President Vladimir Putin – even if the information being released to the public is not true.

The Ukrainian attack on the Zaporozhye nuclear facility was, in typical Orwellian fashion, forecasted by the United States four days before it took place. During an August 1 news conference at the United Nations, US Secretary of State Antony Blinken accused Russia of using the nuclear facility as a base from which it conducted artillery strikes against Ukraine. Blinken declared that the act of firing artillery rockets from proximity to the nuclear power plant was “the height of irresponsibility,” implying that these rockets could land on the power plant itself. Blinken also added that the Russians were using the nuclear facility as a “nuclear shield” which prevented any Ukrainian attack out of fear of striking the nuclear reactors.

Blinken’s brazen parroting of Ukrainian government talking points was made more absurd by the absolute dearth of evidence to back up his powerful pronouncements. Normally, when someone of the stature of the Secretary of State speaks in such a public manner about issues of this importance, there is some intelligence information that is released – for instance, overhead imagery showing Russian troop locations near the Zaporozhye nuclear plant – to sustain the allegation. No such data was provided, however, because Blinken had ceased functioning as the head of the American diplomatic service, and instead was functioning as little more than a Ukrainian propagandist.

For its part, Russia has made it clear that there were no Russian forces located in the vicinity of the Zaporozhye nuclear facility save for a small contingent of troops for security purposes (it is, after all, an active nuclear power plant.) Again, while Russia can clearly provide overhead imagery of its force disposition in the vicinity of the plant, operational security precludes it from doing so. It is, after all, the job of the accuser to provide the evidence of a crime, not the accused.

Blinken’s August 1 statement served as the initiation of a public relations campaign which culminated in the Ukrainian artillery attack on the Zaporozhye nuclear facility. The goal of this campaign appears to be twofold – first, to put Russia in a bad light, and second, to allow Ukraine to accomplish that which it could not achieve through military force – the eviction of Russian troops from Zaporozhye. The calls for international intervention emanating from the West point to a concerted effort in promoting a pro-Ukrainian narrative even when all parties know the underlying facts sustaining this narrative are not true. To counteract that, Russia has extended its own invitation to IAEA monitors to visit the powerplant and summoned a UN Security Council meeting to discuss the situation.

This is far more serious than simply another information warfare campaign gone bad. While the Zaporozhye nuclear facility is constructed to standards which would be able to survive a direct hit from an artillery rocket, the disruption of power and/or damage to safety equipment could lead to the kind of runaway event that preceded the Chernobyl nuclear disaster. The Russian Defense Ministry noted that the Ukrainian attack on the power plant had caused a power surge which triggered an emergency shutdown. The head of the Ukrainian company operating the plant further noted that all but one power line connecting it to Ukraine’s energy system had been destroyed, declaring that any power blackout could be “very unsafe for such a nuclear facility.”

Secretary-General Guterres rightly called the attack on the Zaporozhye nuclear facility “suicidal.” However, the “nuclear terrorists” involved in this atrocity do not hail from Moscow, but rather Washington and Kiev. When the dust from Russia’s military operation finally settles, and those responsible for perpetrating crimes such as the attack on the Zaporozhye nuclear facility can be held accountable, Tony Blinken’s name should, if there were any justice in this world, be at the top of this list.

Scott Ritter is a former US Marine Corps intelligence officer and author of ‘Disarmament in the Time of Perestroika: Arms Control and the End of the Soviet Union.’ He served in the Soviet Union as an inspector implementing the INF Treaty, served in General Schwarzkopf’s staff during the Gulf War, and from 1991 to 1998 served as a chief weapons inspector with the UN in Iraq. Mr Ritter currently writes on issues pertaining to international security, military affairs, Russia, and the Middle East, as well as arms control and nonproliferation. Follow him on Twitter @RealScottRitter and on Telegram @ScottRitter

Why is Europe Silent on Ukraine’s Attempts to Create a New Chernobyl?