Indian workers during a two-day general strike in March 2022. One of the key demands of the strike was the scrapping of the four labor codes. Photo: Centre of Indian Trade Unions

Four labor codes are set to be operationalized by the government soon. These laws will benefit big corporates at the expense of workers and make organizing more difficult

The four labor codes expected to be operationalized soon harken the deepening of the neoliberal project in India. The codes will attenuate workers’ rights and reinforce the power of capital, especially the corporate-financial oligarchy. Inequality among working people will rise as a result—though not as much as the enormous expansion in the share of income of the corporate-financial giants.

According to a recent report, in 2021, the profits of around 3,000 top-listed Bombay Stock Exchange companies were Rs. 9.3 lakh crores—an over 70% growth relative to 2020. Over this period, real wages grew at merely 5%. In other words, the growth rate of labor productivity was high enough to reduce the share of wages in income.

India’s experience during the Covid-19 pandemic has a bearing on the four labor codes. The flawed policy response of the central government to the pandemic was that India got a stringent yet ineffective lockdown. As a result, India was afflicted by unprecedented economic and public health setbacks. There were millions of excess deaths as the neoliberal government was “unable” to take appropriate public health measures. In the political economy, unemployment, underemployment and precarity spiked. Then as the conflict in Ukraine shifted into hostilities, the deleterious macroeconomic prognosis for all economies, including India, increased. Now the world confronts stagflation, and, as expected, through policy measures such as the four labor codes, capital is shifting the “burden of adjustment” onto the working people. 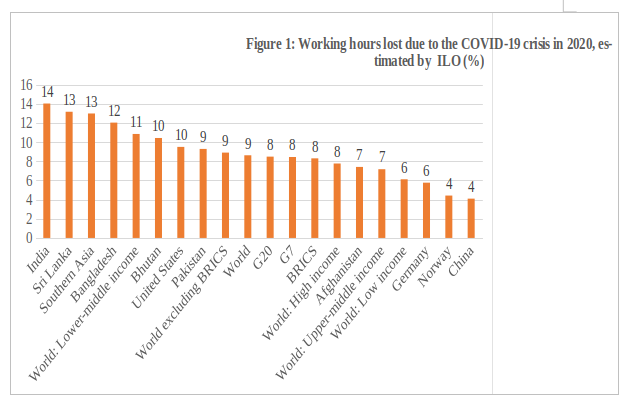 The Indian economy is yet to recover from the job shock dealt by flawed policies adopted by the government during the pandemic. Yet the Center is not only in the thrall of international finance but utilizing the “policy space” created by the pandemic to push more neoliberal projects. 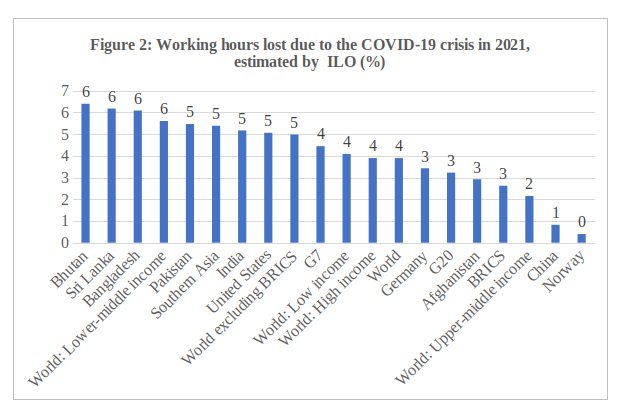 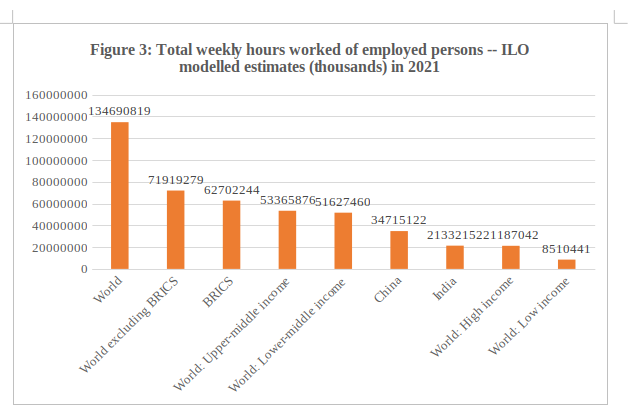 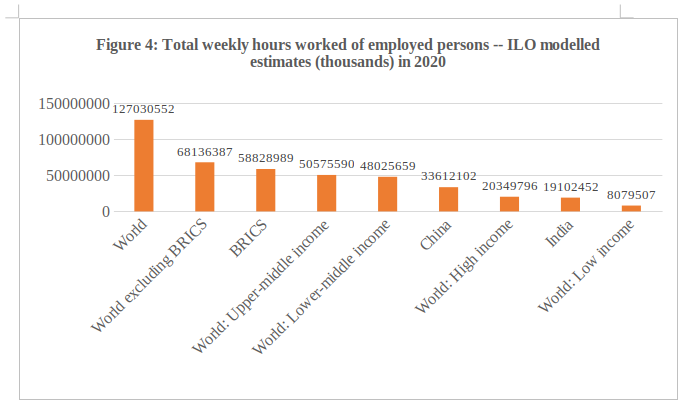 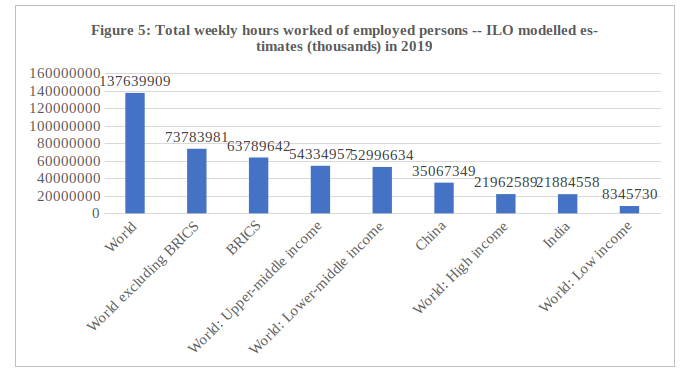 All over the world, the weekly hours worked were 13,76,39,909 (thousand) in 2019, which declined to 12,70,30,552 (thousand) in 2020 and only partially recovered to 13,46,90,819 (thousand) in 2021. The decline in weekly working hours is more significant in India compared with the world. Considering this context, it is incumbent on the Union government to prioritize tackling the unemployment crisis. On the contrary, acting in concert with the “requirements” of the neoliberal project, the government has intensified the assault on workers and trade unions.

The 2022 Global Rights Index report of the International Trade Union Confederation (ITUC) says the rights of trade unions and workers are poorly framed, structured and implemented. It says Egypt, India, Kyrgyzstan, Moldova and Malawi have deployed repressive laws to codify the repression of workers’ rights. The rights to strike, collectively bargain and organize unions, etc., are being circumscribed to reinforce the power of capital over workers. It reports that 87% of countries violated the right to strike. Belarus, Egypt, India and the Philippines prosecuted union leaders after they organized strikes. In Sudan and Myanmar, strikes opposing military rule were brutally repressed. In thirteen countries, trade unionists were murdered in 2022: Bangladesh, Colombia, Ecuador, Eswatini, Guatemala, Haiti, India, Iraq, Italy, Lesotho, Myanmar, the Philippines and South Africa.

The Asia-Pacific region (including India) is the second-worst region for worker rights. India’s average worker rights rating rose from 4.17 to 4.22, which puts it somewhere between systematic violations and no guarantees. Extreme police brutality to repress strike actions marked 2022. This tendency was notable in Bangladesh and India, where striking workers were killed, and in Pakistan, where the State used violence against workers. Egregious human rights abuses continued unabated in Myanmar. In the Philippines, trade unionists and workers fear violent attacks and arbitrary arrests.

Amid job losses and the falling share of wages in income, the Union government has sought to enforce the four labor codes, which will worsen work conditions for several reasons. The codes hike the intensity and duration of labor workers are expected to put in, which has destructive consequences for work conditions and occupational safety. It will heighten unemployment and underemployment (by pushing labor productivity up further). Arguably, average real wages will fall as a consequence.

Ostensibly, the four labor codes consolidate 29 labor laws into the Industrial Relations (IR) Code, 2020, the Code on Social Security (CSS), 2020, the Occupational Safety, Health and Working Conditions (OSHWC) Code, 2020 and the Code on Wages (CW) Bill, 2019. However, these codes shift the balance of bargaining power in favor of employers, to the detriment of employees. This move is a “logical” culmination of neoliberal policies that precede it. The codes permit unprecedented deployment of contractual workers, “labor market flexibility” (hire-and-fire), hurdles in organizing trade unions, and encourage a lax attitude towards labor law violations by employers, for example, by reducing the number of labor inspectors.

If hire-and-fire were less “involved”—if the procedures are “simplified”—the result would be instability in the share of wages in the economy. It would further destabilize demand, output and, therefore, investment. If employment is unstable, wages would be more volatile, and the more price instability there is, the calculations of expected profit and loss become less reliable. These, in turn, would curtail investment. The outcome would be a reduction in investment in innovation.

Given the neoliberal trajectory and the global slowdown, it is unrealistic to expect individual economies such as India to export sufficiently to compensate for the stagnation caused by “labor market flexibility”.

Another setback to labor rights comes from the IR Code curtailing the right to strike. It says unions must give a 14-day notice of strike, which would have a limited validity of 60 days. Strikes are barred for a seven-day period marked for conciliation proceedings and for up to 60 days after the proceedings of a tribunal.

Similarly, the CSS has not universalized social security benefits for workers in the informal sector. Instead, it restricts the ability of labor officers to determine the quantum of provident fund and state insurance due to employees from employers. It restricts the reopening of old cases, which means many short-changed workers would have no recourse. It also inhibits labor inspectors who investigate legal processes in firms. Instead, it emphasizes employer self-certification of labor law compliance.

The OSHWC Code allows firms to employ women in work that may compromise their safety. It makes maternity leave a difficult process. A woman can avail of maternity leave only if she has been in her current job for at least 80 days preceding delivery. Private employers can evade paid maternity leave easily by “disengaging” pregnant women employees before the 80-day mark.

The threshold limit for applying the OSHWC has been increased, curtailing employees’ rights. It now applies to firms that employ 20 (previously 10) workers or more and have power connections. This threshold limit has been raised for firms without power connections from 20 to 40 or more workers. Employers below these thresholds engage the overwhelming majority of workers in India, but the OSHWC allows them to use oppressive practices against employees. Moreover, this code does not provide a judicial mechanism to deal with labor disputes, which further disadvantages workers.

The Wage Code 2020 has three principal “loopholes” that shifts the balance of bargaining power towards employers: (i) it scraps the principal liability of the employers (in lead firms) to pay wages if contractors fail to honor this responsibility. This will adversely impact a large magnitude of India’s workers who are employed by contractors. (ii) it provides legal sanction to the arbitrary deduction of wages by employers in case of losses ostensibly on account of employee performance. This is an open invitation to firms to cut wages, which will hurt demand, output, employment and investment. (iii) reduce worker bonuses via expanding the list of firms and establishments exempt from such provisions. The first two provisions invite us to draw the conclusion that only employers will gain if a firm does “well”, but if it does “badly”, then workers will bear the brunt of “adjustment”.

The Wage Code does not rigorously define minimum wage rates. The task of determining minimum wage rates is with the Union government. However, given the degree of “policy capture” by the corporate-financial oligarchy, this is inadequate in India. The code does not address the concrete challenges concerning wages in India. It does not widen the coverage of minimum wage legislation to workers in the informal sector and does not have adequate legal measures to implement and regulate wage determination in all economic sectors.

The four labor codes are designed to increase the exploitation of workers by reducing their share of wages in income. If they come into force, these codes will diminish workers’ rights, and they seem to have an inbuilt mechanism to legitimize such an outcome. This is its differentiated impact on different segments of workers. Proponents of neoliberalism possibly view this differentiated impact as a blunting effect on worker resistance.

The public posturing over the labor codes is couched in terms of improving the “ease of doing business”. However, this apparent rationale is illogical from a macroeconomic point of view. A fall in the share of wages in income will promote stagnation. Besides, many state governments will likely deploy these codes in ways that will disempower workers even more. Trade unions and democratic movements must mount an effective resistance to the expected operationalization of these codes. Their resistance will be meaningful if it champions demands for a universal employment guarantee and addresses the concerns of all segments of workers, including engagement with the struggles of peasants and workers in the informal sector. The successful struggle against the three farm laws demonstrated that people can make the neoliberal project retreat.

The Union government apprehends worker resistance, and that is why, once again, the four labor codes have been delayed. However, the hegemonic tendencies of the neoliberal project are undermining the Constitution at its foundation. Unions cannot defend workers’ rights unless they actively engage in defending democratic rights in every political economy domain, including culture.