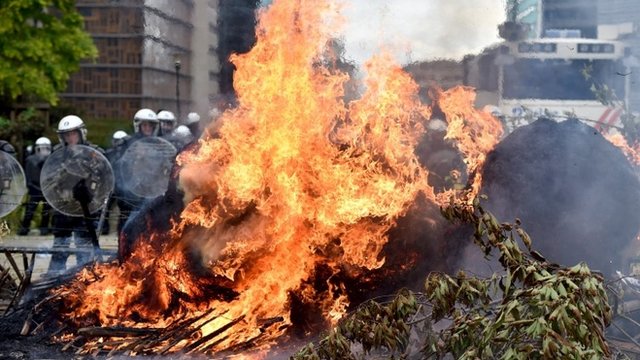 The European continent is shaken by demonstrations, natural disasters and political crises. In July alone, this has caused colossal problems for the countries of Europe and their economies.

Farmers, truckers, airlines and seaports are on strike. At the same time, in just two weeks, the prime ministers of the United Kingdom, Estonia and Italy have lost their posts.

Fires are ravaging the continent. Spain, Slovenia, France, Croatia and the United Kingdom are on fire because of the heat wave. Residents are evacuated. Greek firefighters trying to extinguish the burning suburbs of Athens are trying to survive themselves. Many European farmlands have burned to the ground. Spanish authorities report more than 500 deaths from fires in two weeks. 88 French departments have been placed on alert.

Pilots, flight attendants and airport staff went on strike in July in several European countries: they demanded higher wages due to rising inflation and refused to work. Knowing that the EU is cruelly short of air staff after the dismissals during the pandemic. European airlines are forced to cancel thousands of flights by the end of the summer and face huge queues at major airports. The situation in this sector is on the verge of chaos.

Farmers’ protests in the Netherlands, Italy, Spain, Germany and Poland are gaining momentum. In Spain, after 18 days of protests, stores are closing due to lack of food, shelves are empty. Local farmers blocking roads in Andalusia are protesting against rising prices for basic necessities and fuel.

Dutch farmers are trying to move to blocking ports and airports by parking their tractors directly in front of the Senate in The Hague. Citizens supporting their protest are blocking highways, distribution centers, roads, traffic circles, bridges. The Dutch police used weapons and military equipment against the protesters. The indignation grows after the absurd decision of the authorities to close dozens of farms and productions in order to “reduce nitrogen by 30%”.

In Italy, in mid-July, local farmers, like the Dutch, blocked traffic on the main roads and threatened to “come to Rome”. The crisis and drought have brought the country’s agriculture to its knees. The confederation of local farmers estimates the damage to nearly 3 billion euros because of a shortage of water, announcing a drop in milk production of 30% and “about 30-40% of grain and corn.

Thousands of people are participating in anti-government demonstrations in the Italian city of Genoa, where anti-inflation slogans are popular, but also anti-NATO (protests with similar slogans against Nato are also taking place in Madrid). These slogans are beginning to be used by Italian deputies, who declare, “Enough sending weapons to Ukraine!”

In Rome, thousands of cab drivers blocked again, on July 14, the central street via del Corso. They are demonstrating against the liberalization of the passenger transport market, the arrival on the market of large services (like Uber) and the ousting of its players. Italian cab drivers are preparing national strikes until the end of July.

Large demonstrations have been taking place in Budapest since mid-July. Hungarians are most concerned about the problems of the tax reform tightening conditions for companies, adopted on 12 July, and the lifting of restrictions on paying for municipal services above the ceiling. As part of the fight against the energy crisis, Hungary has decreed that people consuming more than the average amount of energy should pay the excess at the market price, not at the state-subsidized rate. Hungary is already facing high inflation. According to Prime Minister Viktor Orban, “the European economy has shot itself in the lungs and is suffocating.

The French are irritated by the increase in the price of food and fuel. Sometimes the protests degenerate into confrontations with the police. One such confrontation took place in Paris on July 18. In June, annual inflation in the country reached a record 6.5 percent. An 8.2 percent increase in food prices is expected by the end of the year. Several French companies may close due to soaring electricity and gas rates. Media reports indicate that energy companies have started to switch to fuel oil in anticipation of a complete halt in Russian gas deliveries.

All German ports are closed. The dockers’ strike has stopped all work. The police are increasingly resorting to the use of force. The police treated with particular violence the workers who demonstrated in the port of Hamburg against working conditions and inflation. German farmers blockaded many ports. They are standing in solidarity with Dutch farmers to protest against oil prices and the EU’s climate agenda.

The German government fears that the gas shortage could lead to a state of emergency in some regions in winter. This is what Bild writes, referring to details of a meeting with the head of the chancellery Wolfgang Schmidt. According to the authorities, the gas problem will persist in Germany until 2024, which could cause prices to triple.

Meanwhile, the total debt of European energy companies has exceeded 1,700 billion euros. Companies are forced to take out loans to cover the costs of rising oil and gas prices. While The Economist is scaring Europeans by saying during the heat wave that a “winter horror is coming to Europe”.

Despite all these problems, the EU has allocated 500 million euros for Kiev’s military needs. While the head of European diplomacy Josep Borrell reaffirmed the intention to provide Ukraine with military aid in a “concentrated and unchanging” manner. The Europeans stubbornly continue to destroy their own economy.

Europe Dances on the Titanic