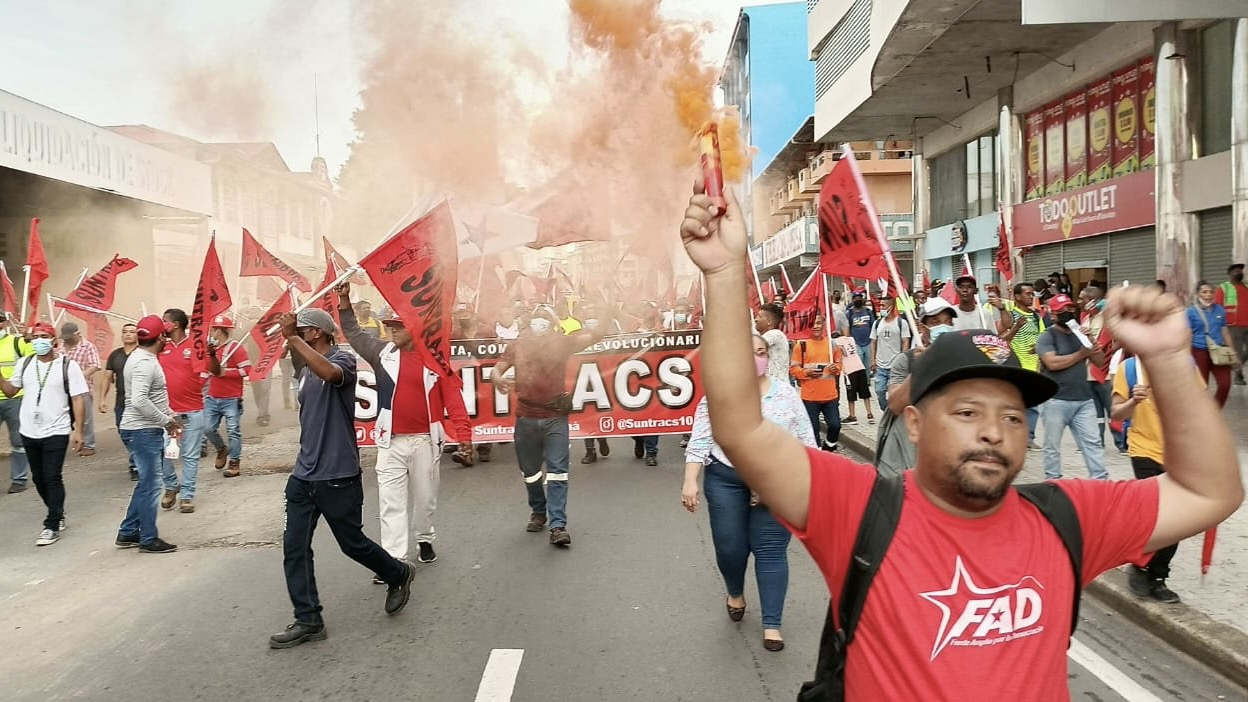 The people of Panama have been on the streets since July 1 to demand the government take urgent measures to combat the growing economic and social crisis. Photo: SUNTRACS/Twitter

For almost two weeks, tens of thousands of Panamanians have been taking to the streets across the country protesting the cost of living crisis and lack of of response and attention from the government of President Laurentino Cortizo

Since July 1, tens of thousands of workers, teachers, students, doctors, and members of social movements have been mobilizing across Panama protesting the high cost of living and lack of support from the conservative government of President Laurentino Cortizo. The People United for Life Alliance, a platform that brings together various social movements and trade unions from across diverse sectors, has presented before the national government a list of 32 demands that address the grave economic, political, and social crises facing the country.

The demands include freezing the price of fuel and basic commodities, a general increase in salaries and pensions, freezing the price of medicine and resolving the lack of supply, greater budget for public education and healthcare sectors, better working conditions in the education and health sectors, repairing of schools, hospitals, roads, and other public infrastructure, measures to combat corruption, rejecting the four bilateral US-Panama military bases, policies to support the Indigenous communities and ensure the respect of their autonomy, withdrawal of the austerity measures such as 10% reduction of the state workforce and a voluntary retirement program for public sector employees, among others.

On Monday, July 11, after violently repressing nationwide demonstrations for ten days, the government finally agreed to negotiate with the representatives of the United People for Life Alliance and the National Alliance for the Rights of the Organized People (ANADEPO) to end the protests, roadblocks and vigils that have paralyzed the principal economic activities in the country.

Following the meeting, on Monday evening, President Cortizo froze the price of fuel at USD 3.95 per gallon, and announced that he would approve a decree to put an end to the increase in the prices of 10 products of the basic family basket.

However, the people’s alliances rejected the measures, deeming them insufficient. They called on the citizens to organize in large numbers and maintain the social pressure, demanding concrete responses to face the rampant inflation worsened due to the COVID-19 pandemic and the war in Ukraine.

“Tomorrow (Tuesday) we are going to carry out the actions that we have planned for in the morning hours, and the march in the afternoon. On Wednesday, there will be a 24-hour national strike in the construction, education, health, transportation and other sectors if no convincing answers to the needs of the people are received,” said Méndez. “We have proposed a list of 32 demands and the government has not referred to the rest of the points that we have stated, and naturally we will be here again,” he added.

Méndez stressed the crises facing Panama were a result of the decades of exploitation under capitalist economic models. “The accumulated problems are the result of a neoliberal model imposed by the economic elites and seven successive governments of traditional parties that profit from the needs of the people,” said Méndez, calling on the people to remain united, disciplined and firm in claiming a decent life for all.

On Tuesday, July 12, massive marches were held in several provinces of the Central American country including the capital Panama City, Veraguas, Chiriquí and Colón, among others.

On July 13 thousands took to the streets in different cities as part of a national day of mobilization.

A recent survey, conducted by local news channels, showed that 94% of those consulted support the national strike, validating the widespread social discontent against the Cortizo government.

Social media networks provide further evidence of the growing popular dissatisfaction against the ruling right-wing government. Thousands of people, on Facebook, Instagram and Twitter, have been expressing their support for the national strike, posting photos and videos of the massive protests with hashtags such as #PuebloUnido (#UnitedPeople), #TrabajadoresUnidos (#WorkersUnited), #AbajoLosPrecios (#LowerThePrices), #JusticiaParaLosPobres (#JusticeForThePoor), #PuebloNoAguantaMás (#PeopleCannotTolorateAnymore), among others.