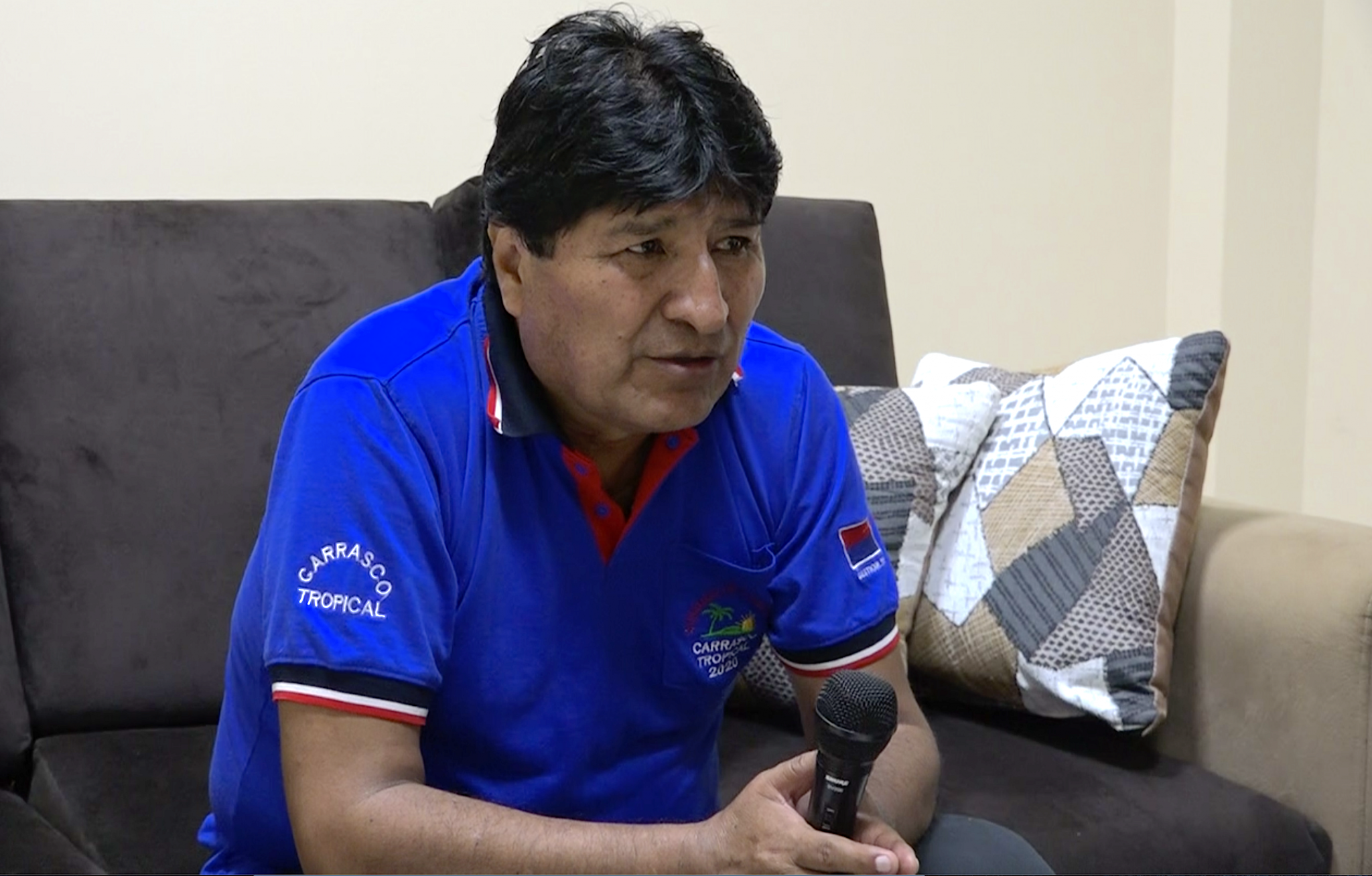 The President of Bolivia from 2006-19 invites Declassified to his house deep in the Amazon rainforest for an exclusive interview – on the UK role in the coup that overthrew him, how he reversed 500 years of history and industrialised Bolivia, and the efforts of the US and its British ally to bring him down.

When Evo Morales, Bolivia’s first indigenous president, was overthrown in a British-backed coup in November 2019, many believed his life was in danger. Latin America’s history is littered with liberation leaders cut down by vengeful imperial powers.

Legendary resistance leader Túpac Katari, like Morales from the Aymara indigenous group, had his limbs tied to four horses by the Spanish before they bolted and he was ripped apart in 1781.

Some 238 years later, Bolivia’s self-declared ‘interim president’ Jeanine Áñez appeared in Congress days after the coup against Morales brandishing a huge leatherbound Bible. “The Bible has returned to the government palace,” she announced.

Her new regime immediately forced through Decree 4078 which gave immunity to the military for any actions taken in “the defence of society and maintenance of public order”. It was a green-light. The following day, 10 unarmed protestors were massacred by security forces.

When the coup was looking inevitable, Morales had gone underground.

His destination, with his vice-president Álvaro García Linera, was El Trópico de Cochabamba, a tropical area deep in the Amazon rainforest in central Bolivia, and the heartland of his Movimiento al Socialismo (MAS) party and its indigenous base.

Before he officially resigned he flew to the remote Chimoré airport where local coca farmers had closed off access roads.

Coca leaf forms the basis of cocaine and the airport, before Morales became leader, had been a strategic base for the US Drug Enforcement Administration (DEA) in the region. Morales had kicked the DEA out of Bolivia in 2008 and converted the base into a civilian airport. Coca production soon went down.

Days after Morales and Linera arrived in El Trópico, Mexico’s left-wing president Andrés Manuel López Obrador sent a plane to rescue them, flying them out of Chimoré airport again.

Obrador later said that the Bolivian armed forces targeted the aircraft with an RPG rocket moments after it took off. It appears the UK-backed coup regime wanted the deposed president – who had served for 13 years – dead. Morales credits Obrador with saving his life.

Morales is back in El Trópico now, but in very different circumstances.

After a year of ‘interim government’ democracy was eventually restored in October 2020 and Morales’s MAS won the elections again. The new president Luis Arce, formerly Morales’ economy minister, took power and Morales made a triumphant return from exile in Argentina.

After a tour of much of the country on foot, Morales settled back in El Trópico. The entrance to the town of Villa Tunari in central Bolivia, where Evo Morales now lives. (Photo: Matt Kennard/DCUK)

He has recently moved into a house in Villa Tunari, a small town that sits just 20 miles down the road from Chimoré airport. It has a population of just over 3,000.

To get there from Cochabamba, the nearest city, takes four hours in the back of one of the minibuses which leave every ten minutes. On the way out you pass through Sacaba, the city where the regime massacred 10 protestors the day after it granted impunity to the military.

As the minivan gets deeper into El Trópico, the significance of Morales and his MAS party becomes increasingly obvious.

The breezeblock houses with corrugated iron roofs, the accommodation of the world’s poor, start to have murals with Morales’s face on the side. His name in block capitals –  EVO – is soon everywhere. So is the word MAS.

Tunari itself is a traditional indigenous town and tourist destination, surrounded by national parks. The tourist industry has picked up again since democracy was restored. With El Trópico forming the backbone of support for Morales and MAS it was subjected to repression during the coup regime’s time in power. For a period, the Áñez regime disabled bank machines in the region, an effort to isolate it completely.

But Tunari is buzzing with life again now. Along its main strip are lines of busy fried chicken and fish restaurants. Buses sit pumping fumes at the town’s transport hub, while hotels and hostels fan off down side roads. A roiling sepia-coloured river runs down the side of the town. It looks like the stereotypical Latin American backpacker stop-off.

I arrive in Tunari late on a Saturday afternoon after a long flight to Cochabamba and the four-hour ride in a minibus.

The interview with Morales is scheduled for Monday, but when I arrive and turn on the WiFi on my phone, I receive a raft of messages from his assistant. Morales is nearly done for the day and wants to do the interview later that evening, in a couple of hours. He also wants to do it at his house. Morales is notorious for his work ethic.

Not long after, my colleague who will film the interview comes to pick me up. In the middle of a tropical rainstorm with sheets of water falling like bricks, we take a tuk-tuk into the town and sit under a tarpaulin sipping coffee, waiting for the call from his assistant.

Eventually it comes, and we pile into another tuk-tuk and go through the back streets of the town before we reach the walls of a nondescript house. A woman comes out to meet us and ushers us in. We go into the living room, which is bare apart from two sofas. I later find out this is the first interview with a journalist Morales has ever done at his house.

I got the interview because of an investigation I wrote in March 2021 revealing the UK’s support for the coup which deposed Morales.

The British Foreign Office released 30 pages of documents about programmes run by its embassy in Bolivia. These showed it appeared to have paid an Oxford-based company to optimise “exploitation” of Bolivia’s lithium deposits the month after Morales fled the country.

It also showed the UK embassy in La Paz acted as “strategic partner” to the coup regime and organised an international mining event in Bolivia four months after democracy was overthrown.

The story went viral in Bolivia. The foreign minister, Rogelio Mayta, called in the UK ambassador Jeff Glekin to explain the contents of the article and requested a report on the findings. The British embassy in La Paz, the capital of Bolivia, released a statement claiming Declassified was engaged in a “campaign of disinformation”, but provided no evidence.

Local journalists told me that Morales often mentions the article in his speeches, so I start with that.

“Just last year, through the media, we were informed that England had also participated in the coup,” he tells me. This, he continues, was a “blow against our economic model, because our economic model has produced results.”

Morales continues: “When we came to government in 2006, Bolivia was the last country in South America in terms of economic and development indicators, the penultimate country in all of America.”

Over the next 13 years of his government Bolivia experienced its most stable period since it declared independence in 1825, and achieved unprecedented economic success, even praised by the IMF and World Bank. Crucially, this success was translated into unprecedented improvements for Bolivia’s poor.

“It is an economic model that belongs to the people, not to the empire.”

“For the first six years we had the highest levels of economic growth in all of South America and that was because of those policies that came from social movements based on nationalisation,” Morales tells me.

He was part of the “pink tide” of left-wing governments in Latin America in the 2000s, but his model was more economically radical than most.

On his hundredth day in office, Morales moved to nationalise Bolivia’s oil and gas reserves, ordering the military to occupy the country’s gas fields and giving foreign investors a six-month deadline to comply with demands or leave.

Morales believes it was this programme of nationalisation that led to the Western-backed coup against him.

“I continue to be convinced that the empire, capitalism, imperialism, do not accept that there is an economic model that is better than neoliberalism,” he tells me. “The coup was against our economic model…we showed that another Bolivia is possible.”

The President of Bolivia from 2006-19 invites Declassified to his house deep in the Amazon rainforest for an exclusive interview – on the UK role in the coup that overthrew him, how he reversed 500 years of history and industrialised Bolivia, and the efforts of the US and its British ally to bring him down.