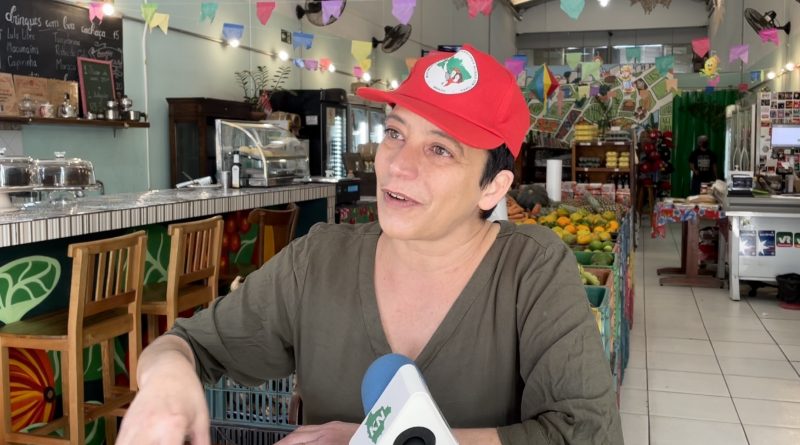 Cassia Bechara of the MST’s National Board sits down with Kawsachun News at Armazém do Campo in São Paulo. June 29, 2022.

Brazil is heading towards this year’s elections with a strong appetite for change after four years of Jair Bolsonaro which followed a coup against President Dilma Rouseff.

In São Paulo, Camila spoke to Cassia Bechara of the National Board of the Landless Workers’ Movement (MST) at the movement’s Armazém do Campo store where one can find a selection of agroecological, organic and family farming products. Cassia sets the backdrop for the upcoming electoral campaign and describes some of the main issues in Brazil today and reflects on the recent victory of Gustavo Petro in Colombia. Below is a transcription of the interview which can be seen here.

Cassia Bechara: The MST is a peasant movement that organizes people to struggle for agrarian reform and for the democratization of land in Brazil. So I believe most of the people in Latin America knows, but Brazil has one of the highest land concentration in the world. It’s one of the, let’s say, the foundations of the Brazilian state is basically the large states monoculture and slavery, slave work.

And those foundations are still a very strong heritage that we have in Brazil. A lot of people with no land, a very high land concentration, structural racism, all of this comes from I mean, our vocation for exporting commodities and all of this comes from this from nations of the Brazilian state. So when we struggle for the democratization of land and for agrarian reform in a country like Brazil, we are struggling to change the foundations; the basis of this unequal society that we have here.

In the MST, we have around 1.5 million people organizing today in the MST camps and settlements. And when we talk about agrarian reform we are talking about much more than only distribution of land, but how we build a new model of agriculture that is basically founded on agriculture on producing healthy food for people of a healthy relationship with nature, new relations with people with some new mode of new form of organizing life in our territories.

Today, we are living under a very strong threat of evictions in Brazil. I believe you see you’re seeing the demonstrations and then we’re talking about urban evictions, but also about rural evictions. We are talking about 30,000 families that are at risk of being evicted and losing not only their houses and their territories, but their forms of surviving because they live from that land.

And we are talking about places that people have been living in for more than ten years. So they have good schools, children have were born there. These are the only places that those people have known, in many cases. So today we are having this Twitter storm to pressure the Supreme Court to keep the the law that this since is pending on the evictions and to at least until the end of the year.

So those are one of the main struggles that we are now the housing movements and the land movements are together. We have two days to try to pressure the Supreme Court not to propagate the suspension of the evictions.

I mean, we can [win] the election but we need people organized to guarantee that our project so that we can advance in our project because the governments are always going to be in dispute, but also organize people to be able to defend that government. The extreme right in Latin America, well, the whole world, have been much stronger in the last years.

And so we need to be organized to to defend our project. And that’s what we are calling the ‘People’s Committees’. So the People’s Committees are basically grassroots work in the communities to organize people, to discuss what do we need for this country, what do we need to improve the living conditions. What are the solutions for the problems in the territories, and also to build this a space where people can basically participate and feel that the decisions for the country are not only in the hands of the government, it must be in our hands.

We say in Latin America that Colombia’s the Israel of Latin America. So it’s the base of imperialism. It’s the main ally of the United States. Having a progressive government for the first time in history in Colombia changes the whole geopolitics of Latin America. I mean, we’re not saying that [Petro] is going to make the revolution.

We know that even he wanted to, it would be almost impossible to make a revolution in this situation. He’s going to have a lot of pressure, even from the United States. Because sometimes we just say, OK, he’s betraying his base and he doesn’t want to do it and we need to see the whole picture.

And of course, having Petro in the government, having AMLO in Mexico, if we have Lula in Brazil, having Argentina, Honduras, and Peru. We are building a group of countries that even with all the limits that they may have in the government to make radical change, but they can start building an integration that will help national governments to make bigger changes.

The pressures that we have from the United States and from imperialism – we don’t face it’s isolated. But if we can build this bloc as we started doing some years ago to face the United States hegemony in Brazil and to build alternatives amongst us for commerce, for exchange and so on, it certainly will make a lot of difference for all those governments.

Kawsachun News will be in Brazil to report on this year’s election, providing exclusive interviews with social movement and political leaders and Portuguese to English translation. You can support this reporting on Patreon: https://www.patreon.com/KawsachunNews