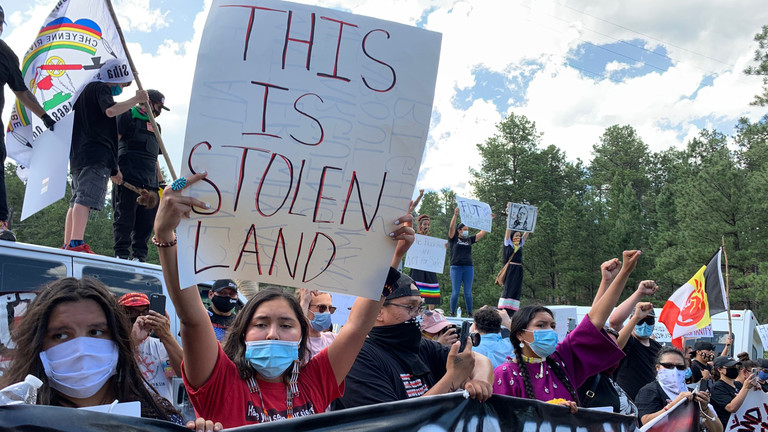 The United States, the most powerful colonial empire in modern history, is sponsoring a discussion on its adversary’s ‘imperialism’

On June 23, 2022, an organization funded by the US Congress, the Commission on Security and Cooperation in Europe – also known as the Helsinki Commission – held a virtual conference calling for the “decolonizing of Russia.”

This begs the question of why they are not seeking the decolonization of the United States. After all, the country was literally founded by the successors of white colonists who had crossed an ocean to violently seize the territory from its indigenous people.

While the conference speakers, who can be listened to here, used the current crisis in Ukraine as a jumping off point, they demanded that the Russian Federation “decolonizes” from regions and republics which have been governed by Moscow since the 16th century (e.g. Siberia and Tatarstan) and others going back to the early 1800’s (e.g. Chechnya).

This is, of course, tantamount to calling upon the US to relinquish nearly all of its territory from the Atlantic to Pacific, not to mention more recent holdings such as Hawaii.

Indeed, when a conference attendee asked what the US should do with Hawaii in light of this “decolonization” discussion, the panel speakers danced around this issue and quickly changed the topic, showing they are not so concerned about “decolonization” at all, but are truly interested in breaking up the Russian Federation for its own sake.

The conference speakers focused greatly on Soviet-era Russia, though again the republics they cited were part of Russia long before the multi-national 1917 Revolution. If anything, the USSR gave these places greater independence than they ever had. Raising the specter of the Soviet Union, and conflating it with modern-day Russia is the standard canard used to drum up hysteria against Moscow as some type of imperial power seeking to conquer the world.

But this attempt fails, for the irony, of course, is that, as great historians such as Eric Hobsbawm and Jean Bricmont have emphasized, there was no country in the world that supported Third World liberation struggles against colonialism (and this was invariably Western colonialism) more than the Soviet Union. And, certainly after World War II, it was the US which fought mercilessly to retain Western colonialism.

Thus, when one looks at the cases of Korea, Vietnam, Cuba, Palestine and Nicaragua, just to name a few examples, it was the USSR that aided the national independence struggles of these countries, while the US militarily defended the ancien régimes. Of course, the most notable case of this was South Africa and the southern African frontline states where the US, and its partner Israel, tried desperately to maintain Apartheid and settler colonial domination while the Soviet Union, and its ally Cuba, fought, and quite successfully, to end these systems.

In addition, it must be emphasized that it was the Soviet Union, more so than any other country, which led the fight, in the 1940s, against the attempt of Nazi Germany to colonize Europe – and indeed the rest of the world. And the USSR lost 27 million people doing so.

Meanwhile, since WWII, the US has created an empire on a scope hitherto unknown in the world. It is now estimated that “the United States has approximately 800 formal military bases in 80 countries, a number that could exceed 1,000 if you count troops stationed at embassies and missions and so-called ‘lily-pond’ bases, with some 138,000 soldiers stationed around the globe.” No other country in the world has, or ever has had, such a military reach. Indeed, the relatively few other countries that have military bases abroad have a combined number of bases totaling not even one-tenth the number of US bases.

Thus, “only 11 other countries have bases in foreign countries, some 70 altogether. Russia has an estimated 26 to 40 in nine countries, mostly former Soviet Republics, as well as in Syria and Vietnam.” (emphasis added). And speaking of Syria, while the Helsinki Commission speakers attempted to claim that Russia has been engaged in some type of neo-colonial effort there, it is in fact the US which is the uninvited (and therefore illegal) invader in Syria and is now occupying one-third of the country against the wishes of the Syrian government and regularly plundering Syrian oil from this occupied land in violation of the Geneva Conventions.

And of course, it is the US, not Russia, which has, in just the past 29 years, traveled halfway around the world to invade, and invariably destroy, other nations such as Iraq (twice), the former Yugoslavia, Libya, Somalia and Afghanistan. In a brazen act of colonial theft, the US simply stole $7 billion (or about 40% of national revenue) from Afghanistan after its 20-year war there. The US continues to hold these funds even as Afghanistan faces a looming famine and the after effects of a devastating earthquake. Similarly, the US purloined Venezuela’s greatest single source of national revenue – its US-based oil company CITGO, which is now being sold off by Washington in pieces. And of course, the US stole billions of dollars of Russian financial reserves held in American banks earlier this year.

Meanwhile, Washington continues to maintain its colonial hold over territories such as Puerto Rico, Guam, Guantanamo Bay, and Hawaii, not to mention the fact that the entire territory of what is now known as the United States of America represents lands stolen from indigenous peoples and Mexico.

In short, the US government and its compliant NGOs have no business talking about “decolonizing” anyone before they get down to the business of decolonizing their own lands.  Such an effort could start with the removal of US military bases from around the world and the accompanying withdrawal of all US foreign troops; the return of all stolen monies and resources to such countries as Afghanistan, Syria, Venezuela and Russia; the return of Guantanamo Bay to Cuba; holding referendums in Puerto Rico and Hawaii on independence; and paying major reparations to the indigenous peoples of the United States and the descendants of former slaves.

Such a focus on one’s own country’s sins is not only the right thing to do but has greater prospects for success and also avoids the risks attendant in advocating the forced break-up of other nations, such as the Russian Federation – something the Helsinki Commission is at least implicitly calling for in its demand for the “decolonization” of Russia.

Daniel Kovalik teaches International Human Rights at the University of Pittsburgh School of Law, and is author of the recently-released No More War: How the West Violates International Law by Using “Humanitarian” Intervention to Advance Economic and Strategic Interests.