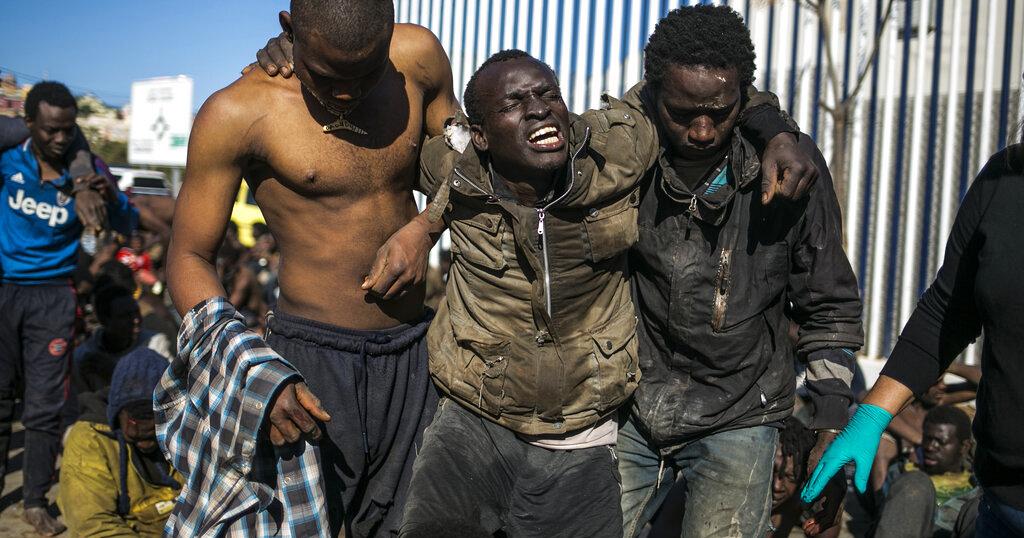 Spain’s Socialist Party (PSOE)-Podemos government, working with Moroccan police acting as the European Union’s border guards, have carried out a barbaric massacre at the borders of the Spanish enclave of Melilla in Africa.

At least 37 migrants were killed and 150 more were injured when thousands tried to cross the Moroccan border into Melilla on Friday. According to the UNHCR, many came from Chad, Niger, Sudan and South Sudan, and would be considered potential asylum seekers according to international law.

The precise cause of the deaths remains unclear. Some migrants may have died from suffocation or crushing because of a stampede provoked by Moroccan police charges. Other deaths may have occurred when some fell from the top of the fence: at the place on the border where the massacre took place, the border fence rises to between 6 and 10 meters in height. Other may have been directly killed by police who hit them with stones and batons.

Footage released by Al Jazeera showed dozens of people lying by the border fence, some bleeding and many apparently lifeless as Moroccan security forces stood over them. In one clip, a Moroccan security officer appeared to strike a person lying on the ground with a baton.

Significant police repression by Spain’s Civil Guard and National Police left at least 60 migrants injured, two of them in hospital. According to the Spanish government representative in Melilla, police forces of the two sides of the border worked collaboratively in “a joint operation,” with tear gas and baton charges against the crowd from both sides.

The Moroccan Association for Human Rights (AMDH) said many of those wounded “were left there without help for hours, which increased the number of deaths.” Helena Maleno, founder of the Spanish NGO Caminando Fronteras, declared: “The victims of the Melilla tragedy agonized for hours under the cruel gaze of those who were supposed to help them and did not…” According to videos posted by elDiario.es and Público, when 500 migrants crossed into Spain Moroccan security forces crossed into Spanish territory, where they hit, arrested and forcibly returned migrants. The ability of Moroccan police to cross into Spanish territory depended on the collusion of the members of the Civil Guard and the National Police. Only 133 refugees now remain in Melilla, with the rest forcibly expelled.

Certain images, recorded by elDiario.es between 11 and 12 in the morning, show two Moroccan gendarmes at the border, on the roof of a Spanish checkpoint, taking turns trying to stone a migrant who was at the top of the fence.

Photojournalist Javier Bernardo told Público: “migrants who managed to cross were surrounded by the Police and the Civil Guard, who pushed them towards the Moroccan side. Some managed to break free and run further into Melilla. … I was surprised when I saw green helmets of the Moroccan forces on the Spanish side of the fence. The Spanish agents were in trouble, there were many people in a very narrow place. I was surprised to see Moroccan policemen on Spanish soil detaining, assaulting and returning migrants. It’s the first time I’ve seen this in four years working in Melilla.” On Sunday evening, protests erupted across Spain against the massacre—in Barcelona, Madrid, Valencia, Bilbao, Badajoz, Cáceres, Seville, Granada, Cádiz, Mataró and Zaragoza.

These horrific scenes testify to the barbaric character of the European Union. To the east, NATO’s proxy war against Russia in Ukraine has led to tens of thousands of deaths and millions of refugees. To its south, the EU is arraying the full force of its police-military machine against migrants, thousands of whom are left to drown in the Mediterranean each year.

Spain’s Prime Minister Pedro Sánchez hailed the massacre. Promoted in the media as having a more “humane” policy towards migrants when he came to power in mid-2018, Sánchez hailed the police and denounced the victims in words that could have been said by any far-right leader, from former US President Donald Trump to Santiago Abascal of Spain’s fascistic Vox party.

Sánchez condemned the migrants’ attempted mass crossing as a “violent assault” and an “attack on the territorial integrity” of Spain. He cynically blamed it on human trafficking, saying: “If there is anyone responsible for everything that appears to have taken place at that border, it is the mafias that traffic in human beings.”

Even more disgusting, however, were the feigned calls for an investigation from Podemos. Podemos demanded an “immediate and independent” EU investigation of its own government to clarify the “harsh images of violence and serious human rights violations by border authorities.” Deputy Prime Minister and de facto Podemos leader Yolanda Díaz sent her “condolences to the loved ones” of the victims.

Podemos parliamentary spokesman Pablo Echenique tried to deflect attention by racializing the massacre and blaming Morocco. He tweeted: “If they were blond and European, there would be emergency meetings at the highest level, television specials about their life stories and their families and a total break in relations with the country whose police action has caused this tragedy.”

In fact, as Echenique knows full well, the imperialist media’s propaganda feigned sympathy towards Ukrainian refugees only seeks to promote war against Russia, which Podemos fully backs. In reality, official treatment of Ukrainian refugees has been very different, with one EU country after another cutting their social benefits. One of the worst was Spain, where authorities have been receiving large numbers of complaints from Ukrainians of abuse and poor treatment. Just 6.5 percent of the 47,000 Ukrainian refugees in Spain have found work, mainly seasonal jobs tied to the orange harvest.

The Podemos International Area stated that the timing of the massacre “is not by chance,” as it occurs days before the NATO Summit in Madrid, where the southern border and increasing military spending will be discussed.

This statement directly raises the issue of the complicity of Podemos in the massacre. At the NATO summit, the PSOE-Podemos government is demanding that NATO consider migration as a “hybrid threat,” justifying stepped-up repression of refugees and imperialist interventions in Africa. If this massacre was “not by chance,” the question is whether the PSOE and Podemos encouraged this to take place to justify their plans they will announce for the NATO summit.

The brutality of the EU, the PSOE-Podemos government and their Moroccan police allies against refugees must be taken as a warning to the working class. Amid spiraling inflation, millions of preventable deaths due to capitalist mismanagement of the COVID-19 pandemic, and NATO’ waging of war with Russia, the ruling class is rapidly turning to dictatorship.

The Melilla massacre is just the latest outrage that the PSOE-Podemos government has perpetrated against refugees. Tens of thousands have died making this risky journey. Last year, over 1,109 migrants died trying to reach the Canary Islands. For those who reach the islands, they are interned in concentration camps built by the PSOE-Podemos government.

Last year, the government, backed by the EU, reacted to desperate migrants crossing from Morocco into Spain by deploying the army, special forces and riot police to round up and expel thousands of desperate men, women and children after denying them food and medical care.

As the WSWS warned, violence against migrants would soon be turned against the workers. Months later, the PSOE-Podemos government deployed armored vehicles and riot police against striking metalworkers in Cadiz; this April, it mobilized 23,000 police to crush a truckers strike against rising fuel prices amid NATO’s war against Russia in Ukraine. Now, Spain is mobilizing 20,000 police and military officers to police the streets during the NATO summit in Madrid.

The sympathy for migrants felt by millions of workers across Europe exposes the utterly anti-democratic character of the anti-refugee policy of the PSOE-Podemos government and the EU.