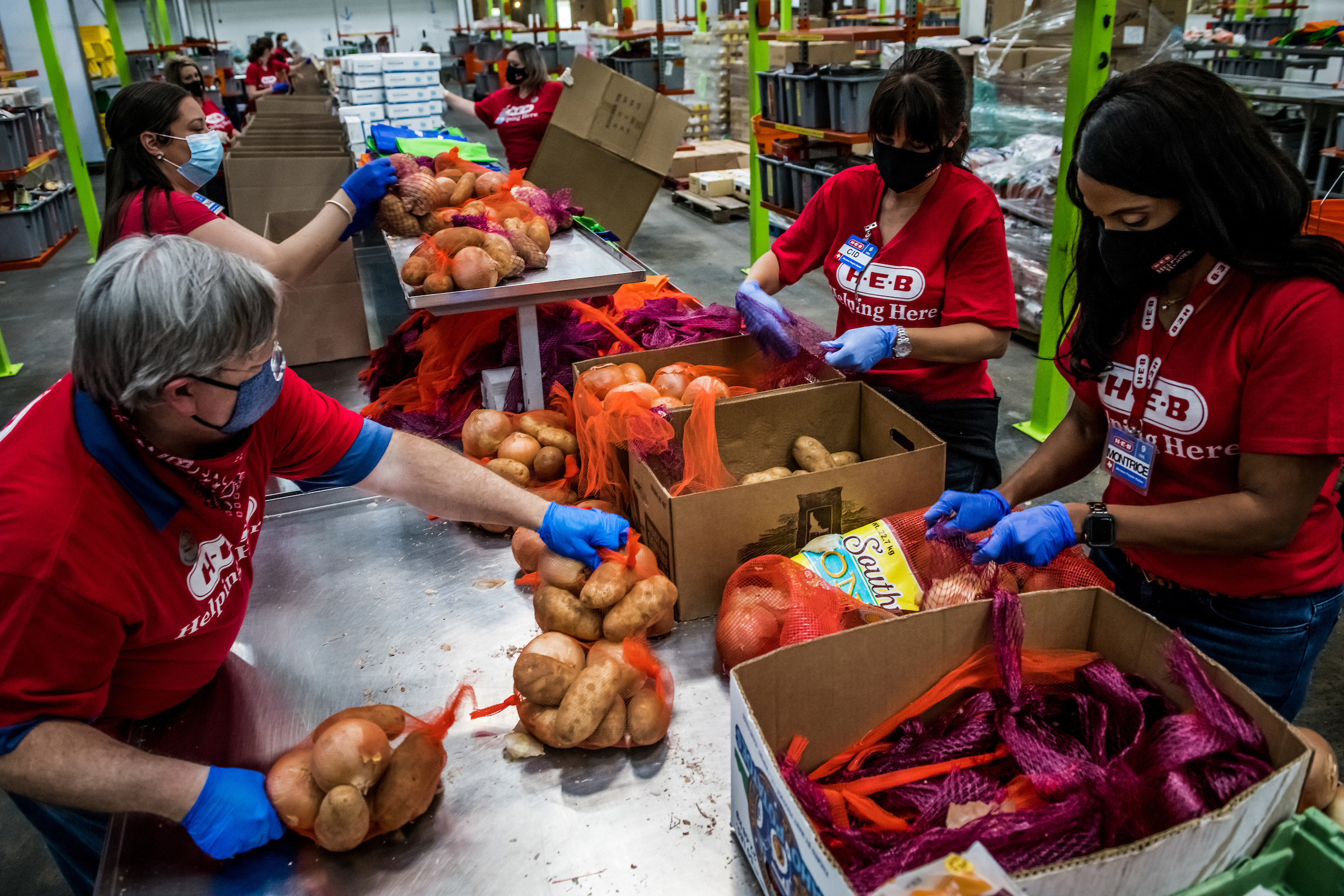 In 2018, 48% of U.S.-based churches had their own food-distribution ministry or supported efforts run by other churches or organizations such as food pantries or food banks.

These faith-based ministries, unlike government programs, provide immediate help to hungry people with no requirements. And more than two million people volunteer at a food pantry, soup kitchen, emergency shelter or after-school programs in the U.S., working more than 100 million volunteer hours a year—according to Hunger in America 2014, a study conducted by Feeding America.

This wave of charity recognizes a serious problem in the United States: Despite being a wealthy nation, food insecurity remains high.

People in the U.S. Are Not Food Secure

In the U.S., the average percentage of households with food insecurity stayed between 10% and 15% from 1995 until 2020, when the numbers shot up. Despite volunteer and government food aid, hunger grew 9% from 2019 to 2020, when 38 million people were hungry.

According to recent research by the Census Bureau from the week before Christmas 2021, 81 million people experienced food insecurity, and 45 million reported not having enough food. Families with children have suffered most: The rate of hunger has been 41% to 83% higher for households with children than adult-only households.

In 2020, one in seven (14.8%) households with children could not buy enough food for their families. The prevalence of food insecurity was much higher in some states than others, ranging from 5.7% in New Hampshire to 15.3% in Mississippi from 2018 to 2021.

Along with this, they now have almost 100% electricity coverage, more than 90% of people have potable water in their homes, and there is good universal health care and education including technical and university education. The government subsidizes transportation, electricity and water for their more vulnerable population.

Since petroleum prices skyrocketed in March 2022, the government is covering all the increases in electricity, gas and gasoline. Since 2007, amazingly, they have increased renewable energy from 20% to almost 80% and are in third place worldwide.

They had a major land reform in the 1980s that put land into the hands of nearly a million people. During three governments by and for the wealthy from 1990 to early 2007, much of that land returned to the hands of the wealthy. But government policies have helped nearly 600,000 families legalize their property. The government also makes technical assistance, training and low-interest loans available to micro and small-scale farm families.

It is interesting to note that, during the years of the Somoza-family dictatorship, supported by the U.S. from the 1930s to 1979, there was much concentration of land in a few hands. That impacted what was grown and how. In the western Pacific area, there were so many pesticides used for production of cotton that, even today, pesticides are found in the breast milk of women from this area.

Because of current Nicaragua policies that benefit the people instead of U.S. corporations, the U.S. has been doing many things to destabilize Nicaragua politically, and even directed and financed a coup attempt in 2018.

Violent U.S.-backed protests in Managua in 2018 that threatened to bring down the Ortega government. [Source: truthdig.org]

Although it didn’t fly, it cost the economy billions of dollars, and the U.S. continues to try to destroy the excellent example Nicaragua is giving to the world. Just visit Nicaragua and you will see that another world is possible and that we could be employing similar policies in our country.

Monoculture production of grains on a corporate scale is not good for the land and requires enormous amounts of fertilizers and pesticides. Whereas sustainable farming practices control weeds, insects and other pests with ecosystem management, farmers who monocrop are dependent on pesticides. Pesticides are linked to multiple health problems, including neurological and hormonal disorders, birth defects, cancer and other diseases.

Production of cattle, pigs and chickens on a corporate scale is terrible for the environment and there are many cases of water sources being polluted.

Corporate-raised animal products such as beef have lower levels of important nutrients and are higher in LDL (the “bad”) cholesterol. Grass-fed cows eating in a field produce milk and meat higher in omega-3 fatty acids, high-quality fats, and precursors for Vitamins A and E.

The volume of animal waste produced on factory farms is much greater than that of human waste. Household waste is processed in sewer systems, while animal waste is often stored in lagoons and applied, untreated, as fertilizer to farm fields.  That excrement stored in lagoons has pathogens such as E.coli, residues of antibiotics, animal blood, bedding waste, cleaning solutions and other chemicals. Manure pit gases with hydrogen sulfide, ammonia and methane fill the air, along with dust and irritants.

Factory farming is especially threatening to ground water supplies. Bacteria, viruses and nitrates can enter the supply and the community can be exposed to disease and nitrate poisoning. Nitrate poisoning is dangerous to infants and fetuses and can lead to birth defects and miscarriages. It has also been associated with esophageal and stomach cancers.

There is substantial overuse of antibiotics on factory farms—80% of antibiotics sold in the world today are for corporate farming. Antibiotic overuse leads to the evolution of antibiotic-resistant bacteria. Then with mutations, these bacteria can jump to humans, causing pandemics. Pandemics are also associated with viral mutations promoted by the large number of animals in very small spaces. In recent years, we have seen an increase of zoonotic diseases; these are infectious diseases caused by a pathogen such as a bacterium, virus, parasite or prion that has jumped from an animal to a human. Examples are salmonellosis, Ebola, influenzas, and bird and swine flu.

In the United States, along with food charity, it is essential for us to become involved in changing food production policies that support more small and medium-scale farmers who can be encouraged to use sustainable practices through loan policies, for example.

We also need an agrarian reform plan and laws to limit how big a farm can be so that we prioritize the health of our population instead of prioritizing the profits of corporations. And, of course, we need good jobs that pay a living wage so that everyone can enjoy good nutrition—and we must recognize this as a human right.

One last point as food for thought. The U.S. has already sent $13.6 billion in arms to Ukraine and it appears on the verge of sending $33 billion more in arms. To end world hunger would only cost $45 billion. Why do our lawmakers so easily spend billions on war but do not even consider spending money on peace?

Nan McCurdy works for the United Methodist Church in the state of Puebla, Mexico with Give Ye Them to Eat (GYTTE), a ministry with impoverished rural people that works in community-based health, sustainable agriculture, and community development specializing in appropriate technologies. Nan is also the editor of the weekly on Nicaragua, NicaNotes. Nan can be reached at nanmigl@yahoo.com.