On 22 June 2022, the LPR (Lugansk People’s Republic) announced that the encirclement of Zolotoye and Gorskoye was now complete, while another cauldron is closing in on Lisichansk.

Despite the Ukrainian army’s continued terror bombardment of Donetsk, Makeyevka, Gorlovka and Yassinovataya in the Donetsk People’s Republic (DPR) – with much less intensity than a few days ago due to increased counter-battery fire – the allied forces of Russia and the LPR continue their advance and encirclement of Ukrainian troops in Zolotoye, Gorskoye and Lisichansk.

Allied forces officially announced today that they had taken control of Vrubovka, Loskutovka, and Rai-Alexandrovka, thereby completely encircling the towns of Zolotoye and Gorskoye. Street fighting has already started between Ukrainian troops and allied forces in Zolotoye. 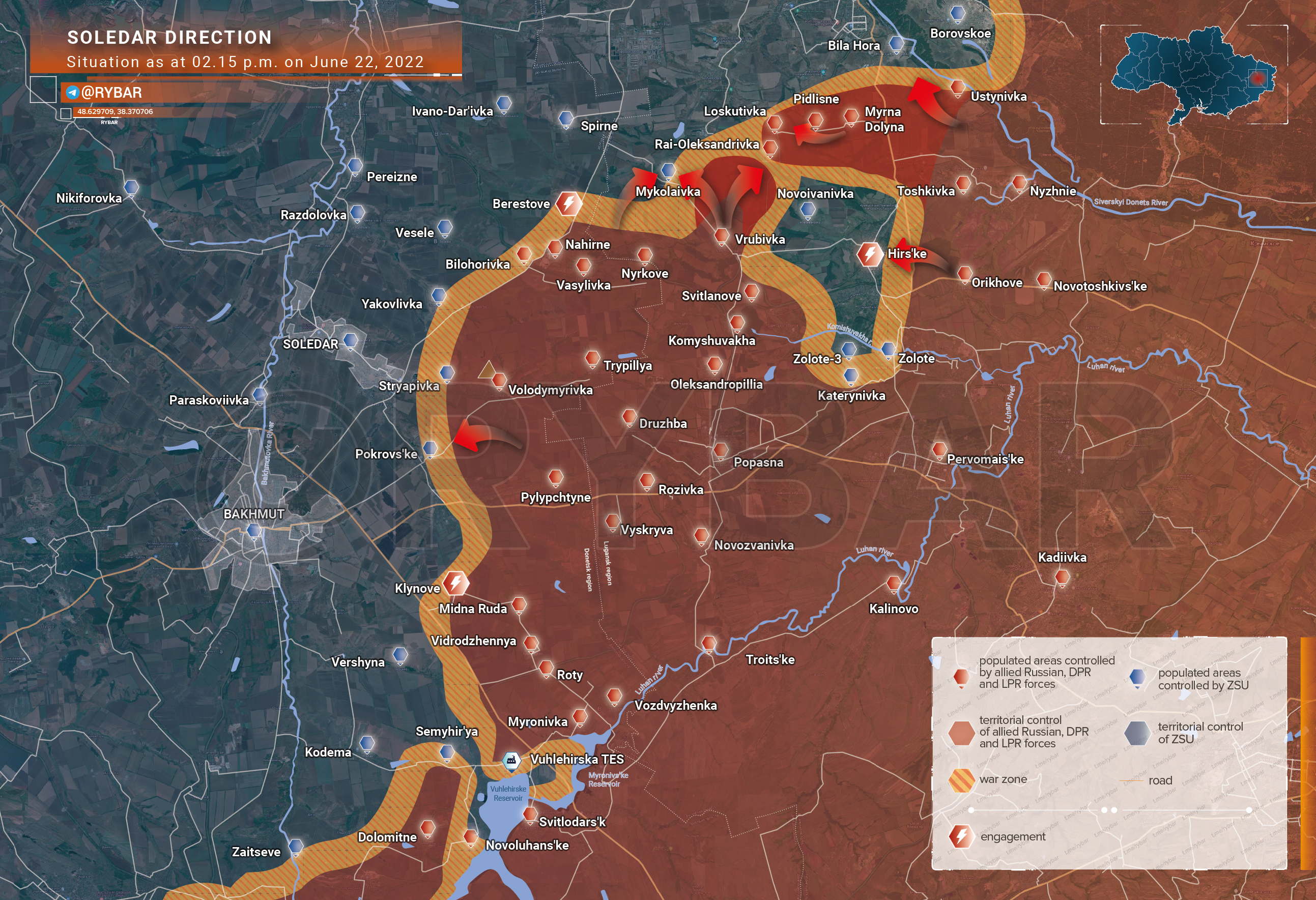 According to Vitaly Kisselev, the Deputy Minister of the Interior of the LPR, about 1,200 Ukrainian soldiers and about 100 mercenaries are surrounded in the Zolotoye – Gorskoye cauldron.

When the cauldron around Gorskoye and Zolotoye was closed, a group of foreign mercenaries was eliminated by the Allied forces, who were able to recover several valuable “trophies” (Western weapons that had been supplied to Ukraine) and important intelligence.

The identification of the eliminated mercenaries will take time, because as the spokesman of the LPR People’s Militia, Andrei Marochko, pointed out, the Ukrainian soldiers and mercenaries have now been ordered to remove any means of identifying their bodies (identity papers, chevron with the name, etc).

Andrei Marochko also confirmed that a cauldron was closing in on Lisichansk and the remaining Ukrainian troops entrenched in the Azot factory in Severodonetsk. These troops are currently negotiating their surrender in a bad position, following their violation of the ceasefire when Russian forces opened humanitarian corridors to allow civilians to evacuate the factory.

Map of the military situation around Lisichansk (areas controlled by allied forces are in red):

As can be seen on the map above, the creation of this cauldron around Zolotoye and Gorskoye also advances the encirclement of Lisichansk.

The near-encirclement of Lisichansk was confirmed by Paul Ronzheimer, a German journalist for Bild, who said he was caught in gunfire on the road as he left the city.

We just got under attack on our way out of #Lyssytschansk which is almost encircled. Thank god, Giorgos, Vadim and I are not injured, only one window of the car broke. Russians propaply attacked the road with Mortar. Before that we were inside Lyssytschansk. Soon more @BILD 👇 pic.twitter.com/Iw9h6MN7Gi

According to information provided by the LPR, several groups of Ukrainian soldiers in the Zolotoye – Gorkoye cauldron and near Lisichansk have contacted Allied forces and indicated that they want to surrender, but that they are prevented from doing so by special units tasked with eliminating soldiers who attempt to surrender.

In Metelkino, near Severodonetsk, the Aïdar battalion surrendered along with its commanders, and they are showing on maps where their comrades are in and around Lisichansk.

Fighting is currently going on towards Belaya Gora and Voltcheyarovka, south-west of Lisichansk, to cut off the highway out of the city. Further south-west, the Allied forces are only 7 km from Artiomovsk (Bakhmut).

As we can see, the front is moving in a very active way on the border between the DPR and the LPR, and the allied forces are multiplying the cauldrons, thus trapping thousands of Ukrainian soldiers who have not been authorised by their command to withdraw.