At St. Petersburg on Friday, backers of multipolarity pushed forward integration of their networks

In St. Petersburg, the world’s new powers gather to upend the US-concocted “rules-based order” and reconnect the globe their way

The St. Petersburg International Economic Forum has been configured for years now as absolutely essential to understand the evolving dynamics and the trials and tribulations of Eurasia integration.

St. Petersburg in 2022 is even more crucial as it directly connects to three simultaneous developments I had previously outlined, in no particular order:

Second, the Chinese “Three Rings” strategy of developing geoeconomic relations with its neighbors and partners.

Third, the development of BRICS+, or extended BRICS, including some members of the “new G8,” to be discussed at the upcoming summit in China.

There was hardly any doubt President Putin would be the star of St. Petersburg 2022, delivering a sharp, detailed speech to the plenary session.

Among the highlights, Putin smashed the illusions of the so-called ‘golden billion’ who live in the industrialized west (only 12 percent of the global population) and the “irresponsible macroeconomic policies of the G7 countries.”

The Russian president noted how “EU losses due to sanctions against Russia” could exceed $400 billion per year, and that Europe’s high energy prices – something that actually started “in the third quarter of last year” – are due to “blindly believing in renewable sources.”

He also duly dismissed the west’s ‘Putin price hike’ propaganda, saying the food and energy crisis is linked to misguided western economic policies, i.e., “Russian grain and fertilizers are being sanctioned” to the detriment of the west.

In a nutshell: the west misjudged Russia’s sovereignty when sanctioning it, and now is paying a very heavy price.

Chinese President Xi Jinping, addressing the forum by video, sent a message to the whole Global South. He evoked “true multilateralism,” insisting that emerging markets must have “a say in global economic management,” and called for “improved North-South and South-South dialogue.”

It was up to Kazakh President Tokayev, the ruler of a deeply strategic partner of both Russia and China, to deliver the punch line in person: Eurasia integration should progress hand in hand with China’s Belt and Road Initiative (BRI). Here it is, full circle.

Building a long-term strategy “in weeks”

St. Petersburg offered several engrossing discussions on key themes and sub-themes of Eurasia integration, such as business within the scope of the Shanghai Cooperation Organization (SCO); aspects of the Russia-China strategic partnership; what’s ahead for the BRICS; and prospects for the Russian financial sector.

One of the most important discussions was focused on the increasing interaction between the Eurasia Economic Union (EAEU) and ASEAN, a key example of what the Chinese would define as ‘South-South cooperation.’

And that connected to the still long and winding road leading to deeper integration of the EAEU itself.

This implies steps towards more self-sufficient economic development for members; establishing the priorities for import substitution; harnessing all the transport and logistical potential; developing trans-Eurasian corporations; and imprinting the EAEU ‘brand’ in a new system of global economic relations.

In a new era defined by Russian business circles as “the game with no rules” – debunking the US-coined “rules-based international order” – another relevant discussion, featuring key Putin adviser Maxim Oreshkin, focused on what should be the priorities for big business and the financial sector in connection to the state’s economic and foreign policy.

The consensus is that the current ‘rules’ have been written by the west. Russia could only connect to existing mechanisms, underpinned by international law and institutions. But then the west tried to “squeeze us out” and even “to cancel Russia.” So it’s time to “replace the no-rules rules.” That’s a key theme underlying the concept of ‘sovereignty’ developed by Putin in his plenary address.

In another important discussion chaired by the CEO of western-sanctioned Sberbank Herman Gref, there was much hand-wringing about the fact that the Russian “evolutionary leap forward towards 2030” should have happened sooner. Now a “long-term strategy has to be built in weeks,” with supply chains breaking down all across the spectrum.

A question was posed to the audience – the crème de la crème of Russia’s business community: what would you recommend, increased trade with the east, or redirecting the structure of the Russian economy? A whopping 72 percent voted for the latter.

So now we come to the crunch, as all these themes interact when we look at what happened only a few days before St. Petersburg.

A key node of the International North South Transportation Corridor (INTSC) is now in play, linking northwest Russia to the Persian Gulf via the Caspian Sea and Iran. The transportation time between St. Petersburg and Indian ports is 25 days.

This logistical corridor with multimodal transportation carries an enormous geopolitical significance for two BRICs members and a prospective member of the “new G8” because it opens a key alternative route to the usual cargo trail from Asia to Europe via the Suez canal. 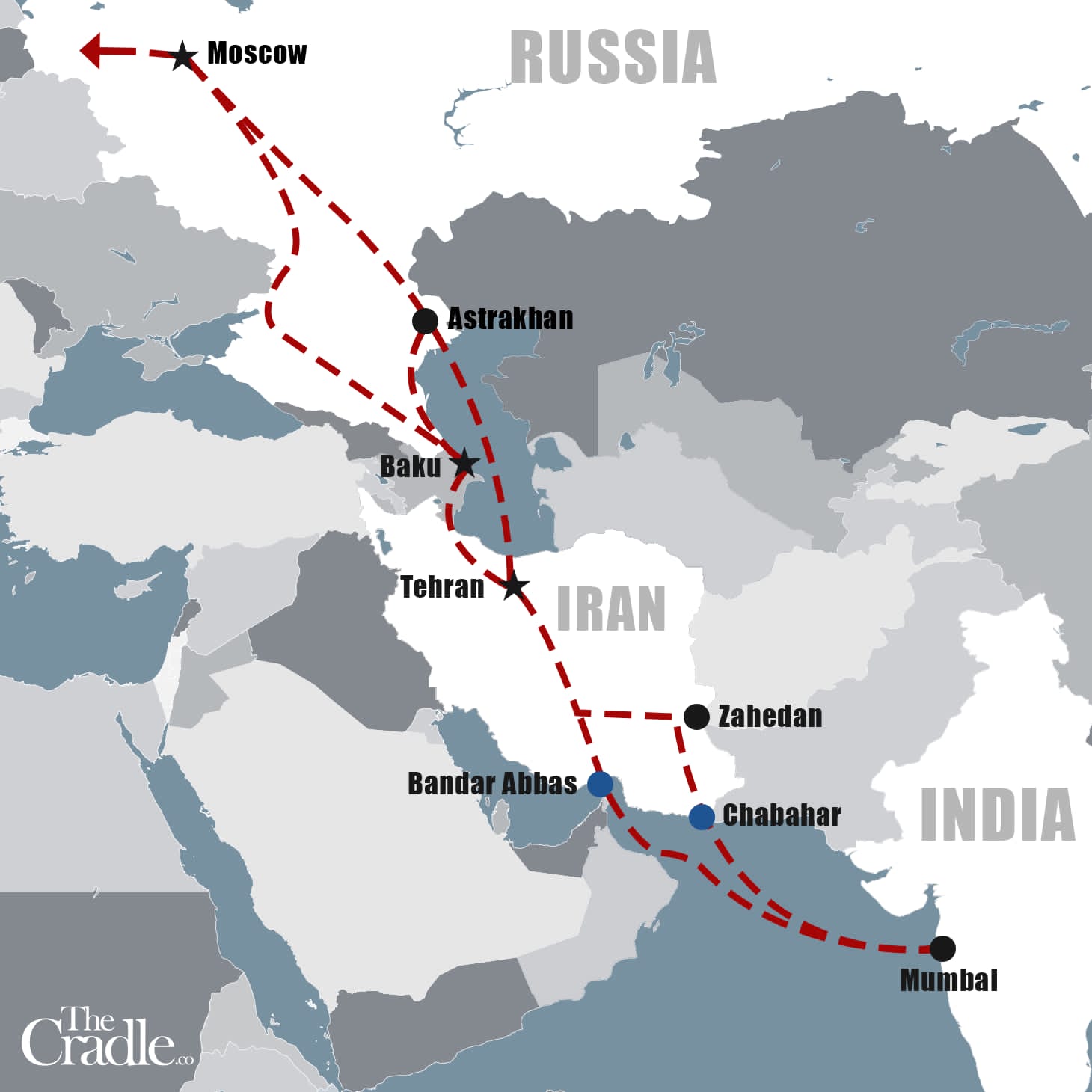 The INSTC corridor is a classic South-South integration project: a 7,200-km-long multimodal network of ship, rail, and road routes interlinking India, Afghanistan, Central Asia, Iran, Azerbaijan and Russia all the way to Finland in the Baltic Sea.

Technically, picture a set of containers going overland from St. Petersburg to Astrakhan. Then the cargo sails via the Caspian to the Iranian port of Bandar Anzeli. Then it’s transported overland to the port of Bandar Abbas. And then overseas to Nava Sheva, the largest seaport in India. The key operator is Islamic Republic of Iran Shipping Lines (the IRISL group), which has branches in both Russia and India.

And that brings us to what wars from now will be fought about: transportation corridors – and not territorial conquest.

Beijing’s fast-paced BRI is seen as an existential threat to the ‘rules-based international order.’ It develops along six overland corridors across Eurasia, plus the Maritime Silk Road from the South China Sea, and the Indian Ocean, all the way to Europe.

One of the key targets of NATO’s proxy war in Ukraine is to interrupt BRI corridors across Russia. The Empire will go all out to interrupt not only BRI but also INSTC nodes. Afghanistan under US occupation was prevented from become a node for either BRI or INSTC.

With full access to the Sea of Azov – now a “Russian lake” – and arguably the whole Black Sea coastline further on down the road, Moscow will hugely increase its sea trading prospects (Putin: “The Black Sea was historically Russian territory”).

For the past two decades, energy corridors have been heavily politicized and are at the center of unforgiving global pipeline competitions – from BTC and South Stream to Nord Stream 1 and 2, and the never-ending soap operas, the Turkmenistan-Afghanistan-Pakistan-India (TAPI) and Iran-Pakistan-India (IPI) gas pipelines.

The contrast between the St. Petersburg debates on a possible re-wiring of our world – and the Three Stooges Taking a Train to Nowhere to tell a mediocre Ukrainian comedian to calm down and negotiate his surrender (as confirmed by German intelligence) – could not be starker.

Almost imperceptibly – just as it re-incorporated Crimea and entered the Syrian theater – Russia as a military-energy superpower now shows it is potentially capable of driving a great deal of the industrialized west back into the Stone Age. The western elites are just helpless. If only they could ride a corridor on the Eurasian high-speed train, they might learn something.