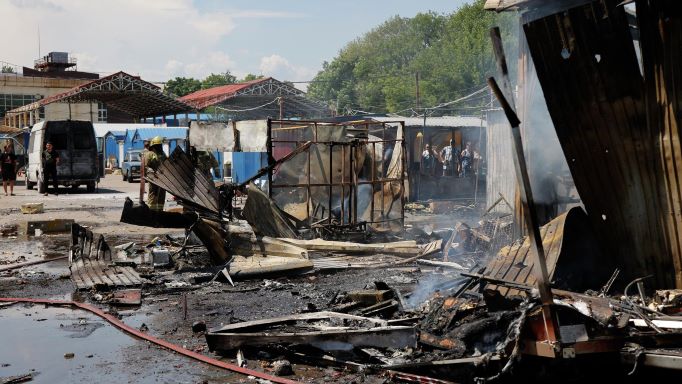 Once again, Ukrainian forces are bombing civilian regions in Donbass and generating unnecessary casualties. This Monday, June 13, new attacks were reported in commercial areas of the People’s Republic of Donetsk. The brutal assaults leave dead and wounded in places outside the military occupation, which should not be targeted by Kiev’s forces. Facing the humanitarian catastrophe, UN shows concern about Ukrainian crimes, but Western countries remain silent.

In the early hours of Monday, the district of Kirovskyi, Donetsk, was bombed several times by Ukrainian troops, according to information provided by local authorities on official media channels of the Republic. About twenty BM-21 Grad rockets were launched by Kiev’s forces in the region, hitting civilian targets and bringing an uncertain number of dead and injured people.

A few hours later, another attack was reported, hitting Maisky’s central market. At least three people died in the episode, including a child. Also, eighteen injured people have been reported. Images are circulating on the internet showing bodies on the floor and market’s stalls in flames. According to local media, the attack has been made with 155-m artillery shells, typical NATO weapons, indicating that once again Kiev is using Western aid against civilian targets.

Ukrainian shelling of residential areas in Donetsk goes on and on today. pic.twitter.com/htG76xdNSe

In another episode of needless brutality, a maternity hospital was bombed in Donetsk, causing women in labor to be quickly evacuated to the facility’s underground room. The immediate action of the hospital’s employees avoided casualties, but damage was inflicted to the buildings. As a result, there is instability about the future of care for pregnant women in Donetsk in the short term, which puts the lives of many women and children at risk.

Faced with such Ukrainian violence, the UN could not remain silent. In response to the attack on maternity, UN spokesperson Stephane Dujarric called Monday’s events “troubling” and claimed that any military action against health facilities is a clear violation of international law.

“We’ve seen the media reports about a maternity hospital in Donetsk. This is extremely troubling. Any attack on civilian infrastructure, especially health facilities, is a clear violation of international law”, he said.

War reporter Dmitry Astrakhan at the Vishnevsky Hospital in Donetsk, where a Ukrainian shell directly hit the maternity ward. All the women, children & hospital staff are safe, they managed to evacuate to the basement in time. pic.twitter.com/HR7yCam8IN

According to local reports, June 13 was the most violent day in Donetsk since 2015. Ukrainian hostility in the Republic appears to have reached historic records. This day, attacks were seen in the districts of Proletarsky, Kuibyshevsky, Petrovsky and Kievsky, which in practice means that almost the entire territory of the Republic was hit by Ukrainian artillery in less than twenty-four hours. In all locations, the victims targeted by Ukrainian forces were civilians.

As a consequence of the attacks, the DPR government asked for further Russian help in order to confront the Ukrainian armed forces. The leader of the Republic, Denis Pushilin, said that all help from allied forces is necessary at the moment, mainly from Russia.

“The enemy has literally crossed all boundaries, using prohibited methods of warfare, residential and central districts of Donetsk are being shelled, and other cities and towns of the DPR are also under fire. An understanding was reached that all the necessary additional allied forces will be involved, primarily from Russia”, he said.

Still, it is important to remember that Kiev decided to intensify its attacks against civilian targets precisely some days after it began to receive extra Western aid with long-range equipment and heavy artillery. There is still no concrete data on how much such new weapons were used in Monday’s events, but last week there were already attacks on civilian targets with these weapons, which raises concerns about what the next steps will be for Kiev’s forces. Russian and local officials fear that Western heavy artillery will be used to carry out large-scale massacres of civilians in Donetsk.

In fact, it seems that, with no chance of reversing the scenario of military defeat, Kiev simply wants to “postpone” the success of the Russian special operation by preventing life from returning to normal in the Donbass regions that have already been liberated from Ukrainian occupation. It is an unethical tactic that does not respect the norms of international law.

However, regardless of how international society reacts to Ukrainian crimes, Moscow is expected to follow the Donetsk government’s requests to send additional military aid, which will mean an increase in the intensity with which the Russians are conducting the special operation. So, as a consequence of Western-supported Kiev’s refusal to comply with the peace conditions, inevitably, the conflict will escalate in the coming days.