Paramilitary groups and guerrillas are considered threats to Venezuelan political stability, their radicalization goes beyond being a public order issue (Photo: CEOFANB)

Last Thursday, June 2, from the command post of the Ministry of Defense, President Nicolás Maduro made an evaluation of Operation Bolivarian Shield 2022 in which he stated that the so-called Colombian terrorist assassins and drug traffickers (TANCOL) are paramilitaries trained by Washington advisors in Colombian territory used for the protection of drug trafficking and destabilization attempts against the Venezuelan government.

They are different organized armed groups (called GAO by the Colombian government) that maintain a “war of all against all” for the control of the “criminal enclaves” and their illegal rents on both sides of the border:

Front 10 “Martin Villa” of the so-called dissidents of the Revolutionary Armed Forces of Colombia (FARC), led by Ivan Mordisco and the recently murdered Gentil Duarte, in the Arauca area by “Arturo”. They are accused of having relations with U.S. mercenaries and of obtaining rents from trafficking cocaine sent to Mexican cartels from clandestine airstrips located in Venezuela.
Clan del Golfo or Autodefensas Gaitanistas de Colombia (AGC), a narco-paramilitary group whose actions are headed by the arrested and extradited “Otoniel”, is active in almost the entire Colombian-Venezuelan border, has links with some politicians, businessmen and members of the Colombian security forces and works for both the Sinaloa Cartel and its competitor, the Jalisco Cartel – New Generation. It is a third-generation organization, i.e., it operates in a network, with territorial nodes and easily replaceable commanders.

National Liberation Army (ELN), a guerrilla organization that disputes with the dissidents the control of the enormous resources derived from oil in the so-called “Saudi Arauca”, in addition to cattle and gold trafficking. Their territorial power is historical in the Arauca area.

President Nicolás Maduro has stated that these groups are financed from Washington to destabilize Venezuela and overthrow the Bolivarian Revolution.

Consequently, the Bolivarian National Armed Forces (FANB) has employed more than 3,500 men and women to achieve, in the last few days, the destruction of 46 clandestine airstrips installed by these groups in the states of Zulia and Falcón. They have also disabled, so far this year, 17 aircrafts used for drug trafficking.

The head of the Strategic Operational Command of the Bolivarian National Armed Forces (CEOFANB), General in Chief Domingo Hernández Lárez, informed that during this time 257 irregular structures of these groups have been neutralized and destroyed in Apure State alone, of which 23 are drug processing laboratories. In addition to having deactivated more than 1,900 booby traps installed, a camp was dismantled where 50 kilograms of explosive material and 10,000 liters of acetone were seized.

In other facilities, more than 6 and a half tons of cocaine, 10,500 non-electric detonators, 4,500 white phosphorous detonators, 1,250 kilos of black powder, 500 meters of slow fuse, abundant shrapnel, short and long arms, cartridges of different calibers, mortars and more were seized. Most of the weapons and war elements seized are of U.S. and North Atlantic Treaty Organization (NATO) manufacture.

FANB in compliance with the orders of our Commander in Chief traces explosive traps in the roads of Mcpio. Paez of Apure state, finding 2 fragmentary devices designed to kill Venezuelans within their own territory, the TANCOL will be extirpated !!! pic.twitter.com/0B21tq4Udj

“From the neighboring country they brought all the dirty methods and wounded and killed peasants and soldiers. They are operative groups that are financed by drug trafficking,” declared President Maduro when referring to a strategy that, when reviewing recent history (and not so much) in the Horn of Africa, it is appreciated that it is not new.

TERRORISM AS A FRANCHISE-EXCUSE FOR MILITARY INTERVENTION

The so-called Tancol are reminiscent of the warlords who have fueled the sustained war for more than three decades in Somalia, a state located in the Horn of Africa where the Biden administration has just redeployed troops, which from experience means more instability, misery, famine and displacement than the population has already experienced.

According to a new Integrated Food Security Phase Classification report released by UN agencies, six million Somalis or 40% of the population now face extreme levels of food insecurity, nearly a two-fold increase since the beginning of the year, the World Food Program, the UN Food and Agriculture Organization (FAO), the humanitarian agency OCHA and the UN Children’s Fund said in a joint statement, adding that there were likely to be “pockets of famine conditions” in six areas of Somalia.

An important element of analysis is that Venezuela is a geostrategic space both for its energy interests and as a key route for the Colombian narco-economy, which sustains much of the U.S. economy. Likewise, the Horn of Africa and its links with West Asia influence three seas of strategic importance for the great powers: the Mediterranean, the Red Sea (connected by Egypt’s Suez Canal) and the Gulf of Aden, which is shared by Somalia in Africa and Yemen in the Middle East. Through these seas and routes travel the world’s shipping containers, transporting oil, gas and consumer products. They are essential for the strategic deployment of troops and naval destroyers.

The excuses for bombing Somalia or arming its dictators have mutated with each U.S. administration, from Cold War policy, to “humanitarian intervention,” to counter-piracy and, more recently, counter-terrorism.

Under Bush Sr., in defense of corporate interests and premiering the new doctrine of “humanitarian intervention,” the U.S. invaded Somalia in 1993 with 30,000 Marines in a military operation called “Restoring Hope.” This concluded in the shameful event in Mogadishu, the capital of Somalia, which cost the lives of 18 American soldiers and wounded 73 and included the shooting down of five powerful “Black Hawk” helicopter gunships. 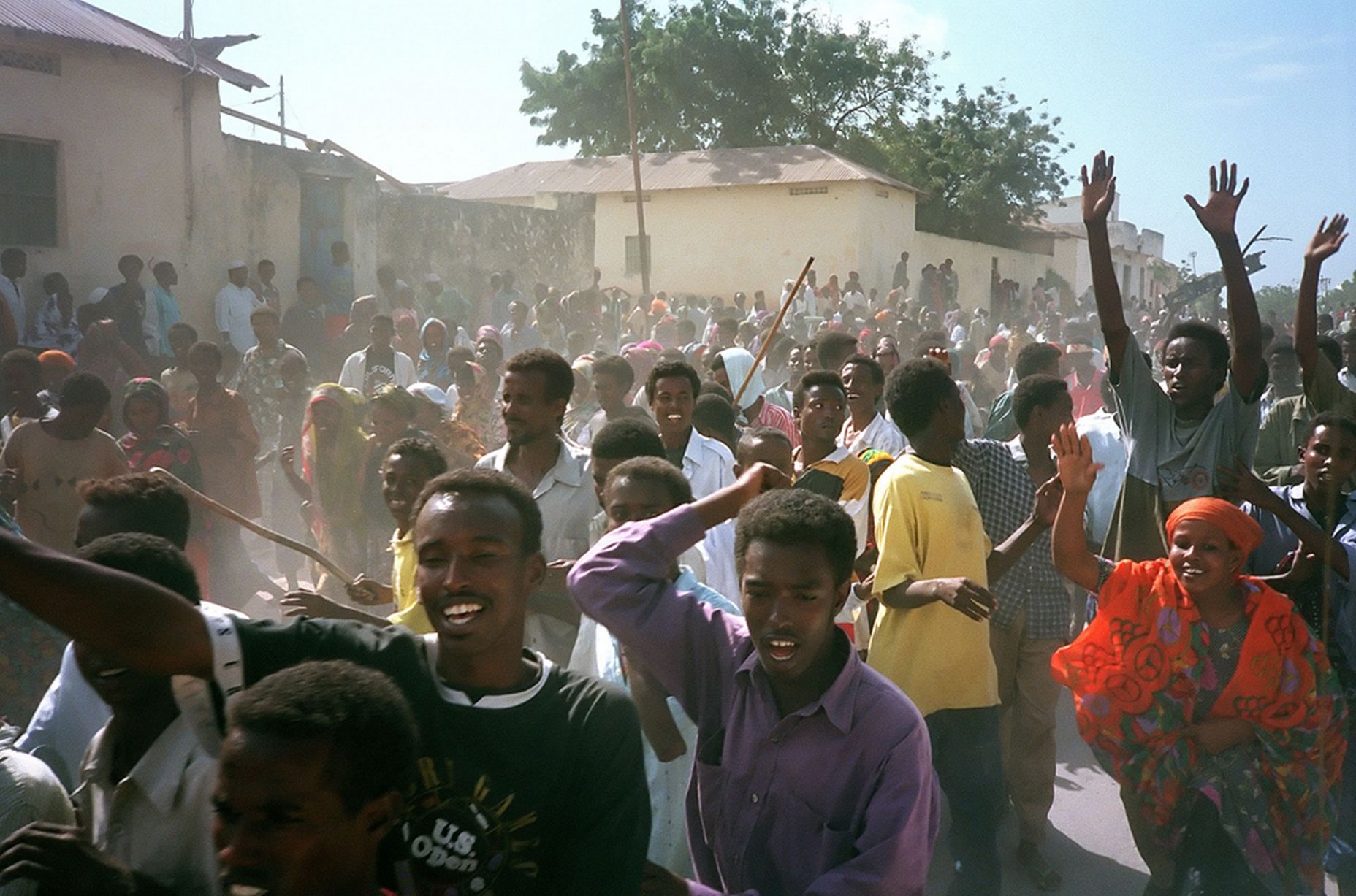 The 1993 military invasion was portrayed in the corporate media as a humanitarian mission that was to save some 2 million Somalis by opening supply lines and pacifying a nation ravaged by famine.

WAR AND PERMANENT CHAOS AS AN ENABLING SCENARIO

But the permanent state of war was stoked by the corporate interests behind a transitional government (Guaidó-style) and these economic and military leaders (including those the U.S. previously fought against in the 1990s) who had joined in the attempted overthrow of the Islamic Courts Union (ICU), a religious movement that had succeeded, with broad popular support, in bringing law and order to the entire country after the coup d’état of dictator Said Barré in 1991. This dictator received more than 600 million dollars in military aid from Washington and sold two thirds of Somalia’s oil fields to the US transnationals Conoco, Amoco, Chevron and Phillips.

Even though the interference of the global north, headed by Washington, is of long standing, the maritime, air and logistical support of the United States to the Ethiopian invasion of Somalia in 2006 is a demonstration of how a similar situation could be repeated in Venezuela from Colombia with the excuse of fighting terrorism, which they themselves sponsor.

Successive U.S. governments have financed the warlords and trained their founders, in the best style of the Afghan Taliban. The 2006 invasion unleashed a catastrophe for the civilian population, many of whom welcomed the Muslim hardliners because they imposed a degree of law and order.

The unproven presence of the Al Qaeda terrorist organization in Somalia, and supposedly sheltered by the Islamic Courts Union (ICU), was the excuse for intervening in 2006, but the real reason was the failure of the warlords’ strategy.

EXTREMIST TERRORISM, SHAKE BEFORE YOU USE.

The U.S. corporatocracy has learned that by stirring up extremism and deploying propaganda virally, you can visualize the outcome without the public attending to the process and justify the occupation of any country.

In that “battleground of conflicting regional interests”, as the corporate press called Somalia at the time, the confrontation had been promoted by Western multinationals to better rob them of their resources, even today they continue to do so: Recently there has been movement in the UK and Israel for recognition of the state of Somaliland to push for its secession and diminish Turkish and Chinese influence in Somalia by further disintegrating it. 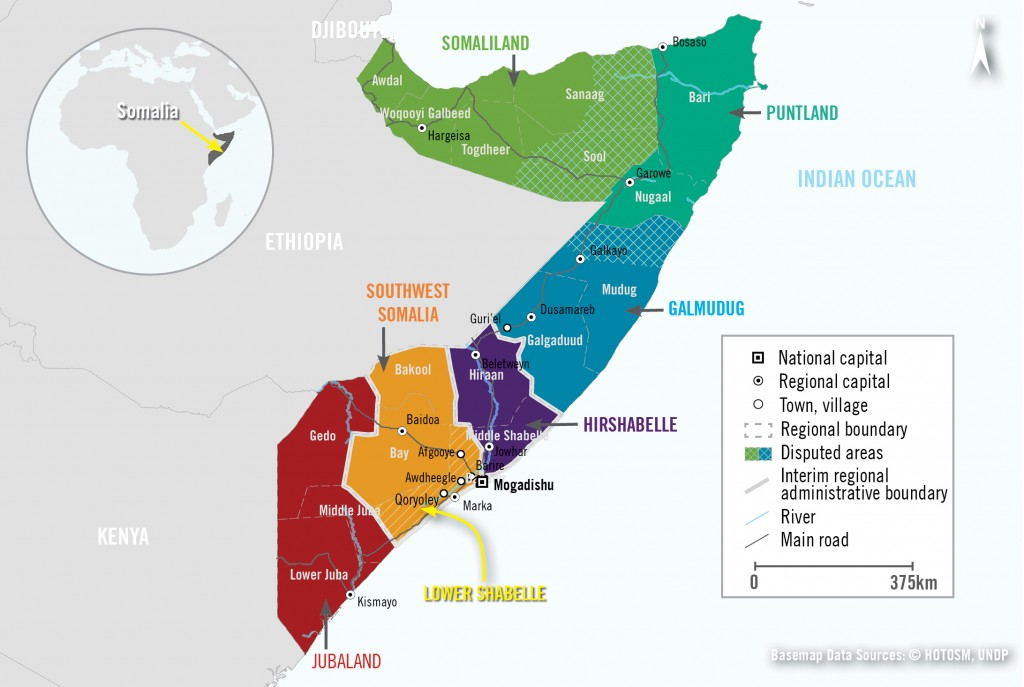 The map of Somalia shows the fragmentation of the territory as a result of foreign intervention based on corporate interests, materialized in the training of terrorist groups such as the warlords (Photo: The Intercept).

The strategy of Anglo-Saxon intelligence agencies was to intensify tensions between Islamists and non-Islamists by backing secular warlords as proxies against the ICU in the mid-2000s.

Since 2006, and with the subsequent defeat of the ICU, several orthodox movements such as Al-Shabaab became radicalized, and in 2011 were linked to Al-Qaeda being made up of a quarter of personnel from Britain. ICU secretary, and later Al-Shabaab leader, Ahmed Abdi Godane, is known to have joined the only major terrorist group in Somalia in the 1990s, Al-Itihaad al-Islamiya (AIAI, “Islamic Union”). AIAI fighters trained with Al-Qaeda in Afghanistan in the 1980s, when the U.S. and U.K. funded them.

Al-Shabbab militants were trained by Abu Qatada, who called himself Bin Laden’s “right-hand man in Europe” and an active protégé of Britain’s MI5. For a country supposedly concerned about international terrorism, the United States has done nothing to rein in one of its closest allies, the United Kingdom, whose successive governments have harbored a number of Islamic extremists they recruited for Somalia.

The same goes for Latin America: For a country supposedly concerned about drug trafficking, the United States has done little or nothing to curb the provision of weapons and routes to both the Tancol groups and the Mexican cartels. The operational structure of drug trafficking between Colombia and Mexico, which uses Venezuela as a route, is close to Uribismo and was close to the Mexican governments that were its unconditional allies (PRI and  PAN). 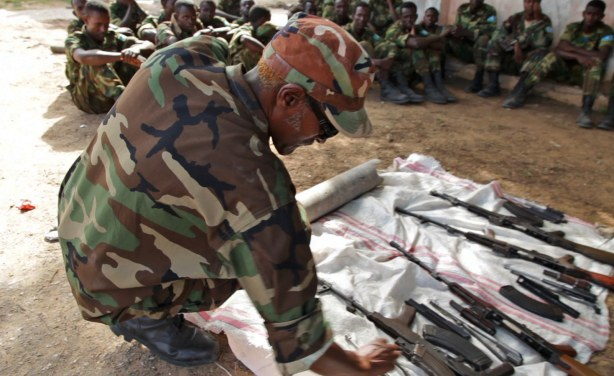 Members of a militia of the Islamic Court of Somalia cradle their weapons in the Jowhar area after clashes with a coalition of U.S.-allied opportunists (warlords) who were expelled from Mogadishu (Photo: Reuters).

The war format generated by Washington has seen in Venezuela some of its resources, in this case they have sought to create a humanitarian crisis through sanctions and the promotion of war through paramilitary groups such as the armed gangs that the Government continues to fight.

It is not uncommon for the United States to mobilize mercenaries and activists it calls terrorists to achieve its geopolitical goals, as has happened with the mujahideen, with the Islamic State and, more recently, with neo-Nazi groups it supports in Ukraine. A hot example are Craig Lang and Alex Zwiefelhofere, former U.S. Army servicemen who came from Ukraine in 2019 to Cúcuta, Colombia, in order to “kill communists” following an eventual invasion of Venezuela and the overthrow of President Nicolás Maduro, revealed The Grayzone.

Before coming to Venezuela they both traveled to Africa, reportedly to fight Al Shabaab, but were deported by Kenyan authorities. While Zwiefelhofer remains under arrest in his country, Lang, who managed to escape justice, returned to Ukraine where he is participating in the current conflict and is being armed with funds from the same United States and the European Union.

Globalized propaganda, particularly Colombian, insists on linking Venezuela to armed groups as if the Venezuelan government supports them, but ignores the links of the Colombian political class and military forces with drug trafficking and paramilitarism. Events such as the recent armed strike in Colombia are evidence of the radicalization of these groups, as well as the recent threats of the ELN to Venezuelan populations, should be read as problems beyond public order, as the evolution of a hybrid war in process in which it is unknown who mobilizes the actors involved.