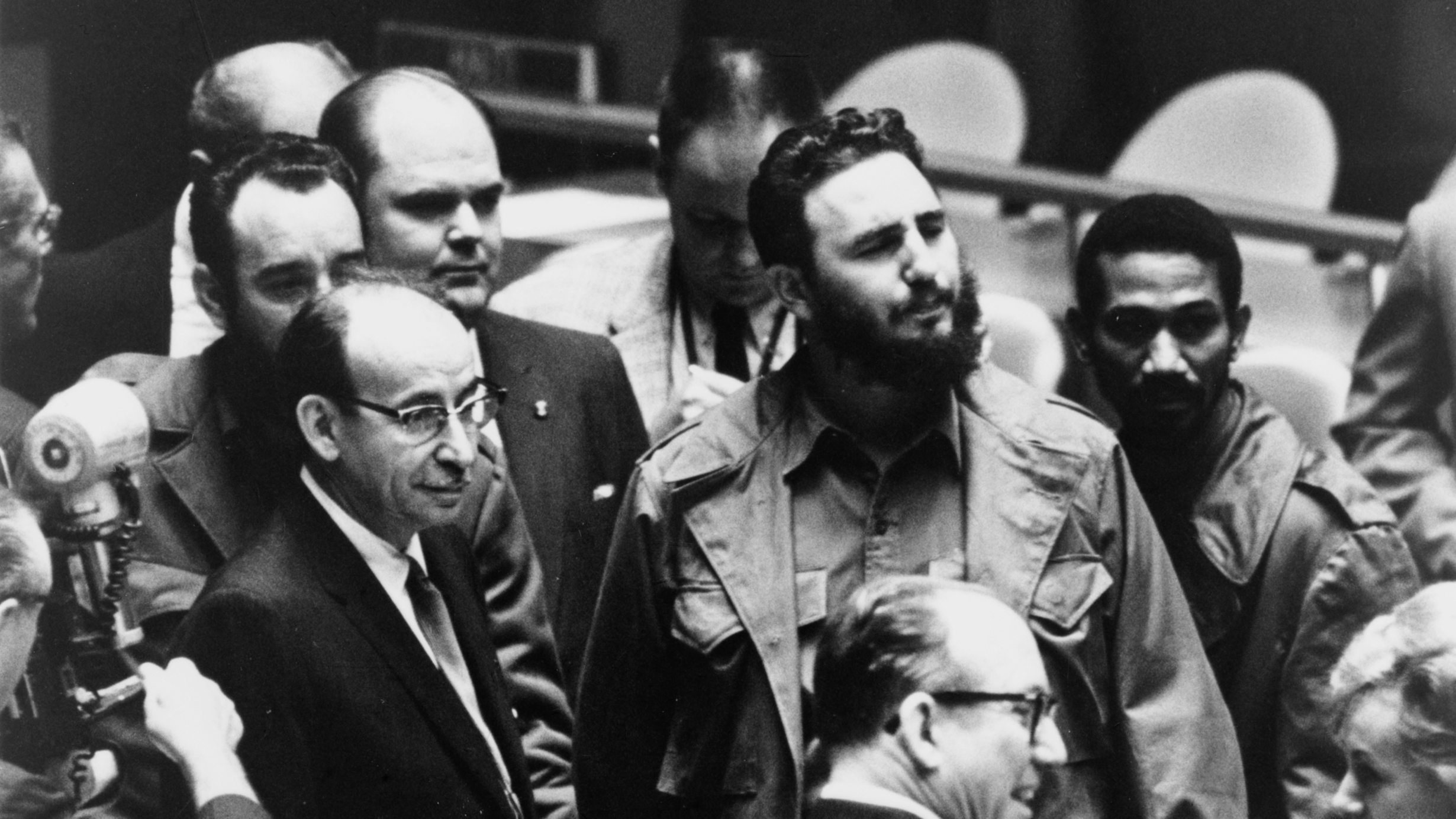 Fidel Castro, president of Cuba, at a meeting of the United Nations General Assembly of 1960

In Cuba, “nonalignment” has never meant being neutral, and has always meant being opposed to attempts to divide humanity

Though Bandung in Indonesia and Havana in Cuba couldn’t be farther apart geographically—with each city located on two distant islands in their respective countries and separated by more than 17,000 km—they have been ideologically close in the imaginations of many people across the Global South. The Third World Project, born out of the continuous collaboration between the newly independent states and their struggles for national liberation, has defined and continues to define the history of the movements for peace and nonalignment even today.

When the Bandung Conference began on April 18, 1955, Fidel Castro was still a political prisoner on what was then called the Isle of Pines, just south of Havana. He was serving a 15-year sentence for having organized a failed attack on the Moncada Barracks just two years before. In those prison years, during which a young Fidel read voraciously, he began to solidify his ideas on the concepts of sovereignty and independence and how they had to be redefined during the Cold War, when imperialism was developing new approaches about how to continue with the subjugation of whole continents.

As Fidel and his comrades in prison charted a new path for Cuba, it was clear that their cause for national liberation had to be closely connected to a broader project of ensuring development and work toward active nonalignment for the people of the Third World.

From the round table of Bandung in Indonesia, the leaders of the Third World unleashed a global struggle to restructure the prevailing world system of that time. The conference witnessed the convergence of socialist countries and the Third World and saw a growing unity among these nations in the struggles to deepen the process of decolonization.

While at the Bandung Conference, the independent governments of Asia and Africa raised the urgency of reviving the anti-imperialist and anti-colonial struggle and the need to increasingly unite and solidify the interests and aspirations of their people. The vast majority of the governments of Latin America, meanwhile, went against the common interests and aspirations of their people, and further submitted to US imperialism under the guise of the Organization of American States (OAS), already functioning as the Ministry of Colonies of the US Department of State, as Fidel would later call it.

In 1959, the Cuban Revolution triumphed. It marked a transformative point of no return for Latin America and its relations with the United States. The US government would later decide not to recognize the revolutionary process on the island. By 1961, Cuba became the focal point of US aggression in the region, leading to a blockade that is now six decades old. For the first time in history, a guerrilla movement had carried out a revolution and confronted US imperialism right under its nose, unleashing far-reaching transformations in its socioeconomic structure, which were opposed to the neocolonial interests of US domination.

Soon after, Cuba became the only country in Latin America to join the Non-Aligned Movement (NAM), created in Yugoslavia in 1961. Fidel Castro and the Cuban Revolution would begin to play a strategic role in internationalist solidarity with the anti-imperialist and anti-colonial liberation struggles of the people of the Third World.

When Cuba joined the NAM in 1961, its foreign policy was at a stage of strategic definition. Cuba’s commitment to the Third World became a pillar of its internationalist strategy, whether through the Non-Aligned Movement or the Tricontinental Conference, or the subsequent Organization of Solidarity of the People of Asia, Africa, and Latin America (OSPAAAL). In the coming decades, many of the national liberation movements that met in Havana in January 1966, during the first conference of OSPAAAL, would be among the new states that began to participate in the Non-Aligned Movement, becoming the new Third World paradigm.

Committed to our own principles of nonalignment

At the founding meeting of the Non-Aligned Movement in socialist Belgrade (then the capital of Yugoslavia) in 1961, Osvaldo Dorticós Torrado, Cuba’s president at the time, stated that nonalignment “didn’t mean that we are not committed countries. We are committed to our own principles. And those of us who are peace-loving people, who struggle to assert their sovereignty, and to achieve the fullness of national development, are, finally, committed to responding to those transcendent aspirations and not betraying those principles.” At a time when many criticized Cuba’s apparent “alignment” with the Soviet Union and attacked the premise of national liberation being tied to a socialist project, Dorticós in his opening speech, during the founding NAM meeting, sought to further define nonalignment, stating that the moment required “more than general formulations, [and that] concrete problems must be considered.”

This active definition of nonalignment has been important for Cuba’s foreign policy in its relationship with the most progressive forces of the Third World. The thinking of the Non-Aligned Movement, starting from 1973, seems to have abandoned the ideas about “neutrality” that had permeated the movement since its creation and has expanded its activities to international economic relations with much more force than in its previous period, in defense of the need for a new international economic order.

Since the fall of the USSR, and the rise of the United States to a position of near primacy, the NAM struggled to adapt to the new realities and became adrift. In recent years, however, with the revival of regionalism in Latin America, and with the emergence of Eurasian integration, the importance of nonalignment and the NAM are being gradually considered once again. People around the world are resistant to the coercion tactics adopted by the United States, which has been trying to isolate countries that do not submit to the will of Washington. This has especially become clear with the June 2022 Organization of American States’ Summit of the Americas, where countries such as Bolivia and Mexico have threatened to boycott the summit in Los Angeles if Cuba, Nicaragua, and Venezuela are banned from attending it. As an alternative, the People’s Summit for Democracy carries forth the legacy of Bandung and Havana, bringing together the voices of the excluded.

Manolo De Los Santos is the co-executive director of the People’s Forum and is a researcher at Tricontinental: Institute for Social Research. He co-edited, most recently, Viviremos: Venezuela vs. Hybrid War(LeftWord Books/1804 Books, 2020) and Comrade of the Revolution: Selected Speeches of Fidel Castro (LeftWord Books/1804 Books, 2021). He is a co-coordinator of the People’s Summit for Democracy.

This article was produced by the Morning Star and Globetrotter.

ALBA-TCP Summit of the Americas Declaration